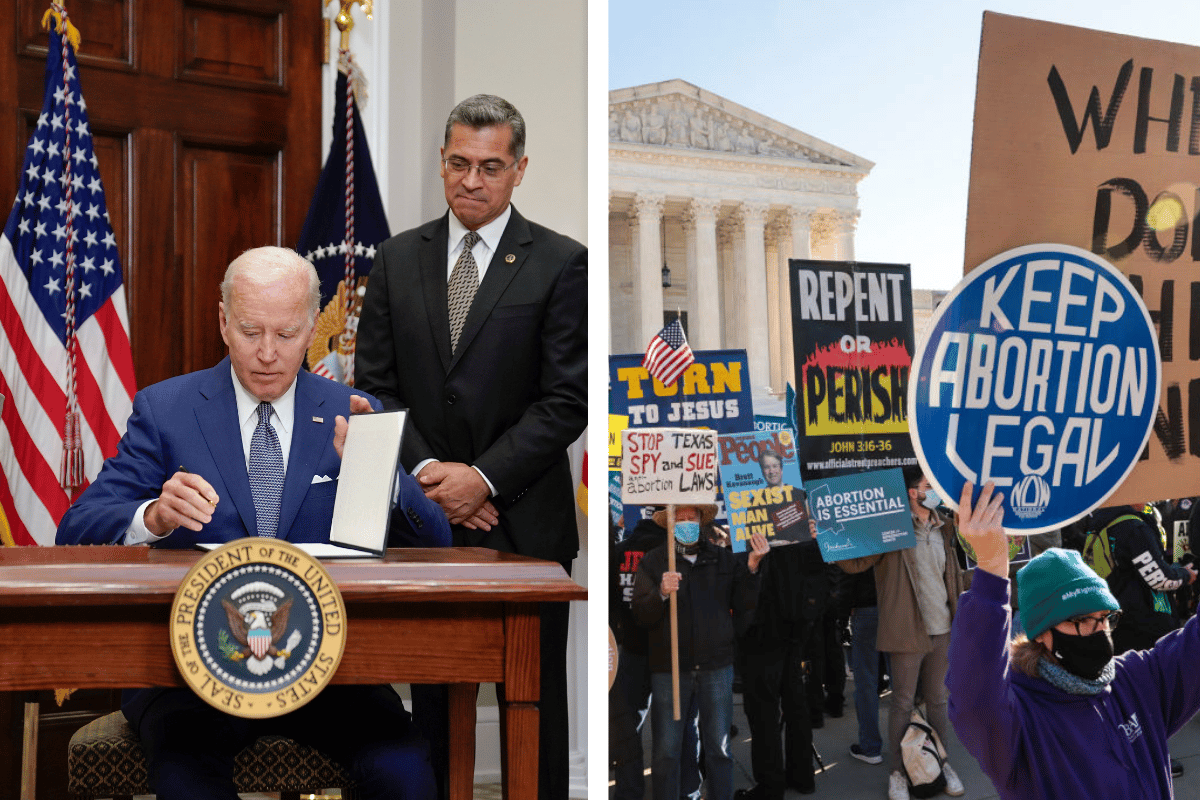 Two weeks ago, the US Supreme Court overturned the landmark 1973 Roe v. Wade ruling that recognised a woman's constitutional right to an abortion and legalised it across the country, handing a momentous victory to pro-life advocates who want to limit or ban the procedure.

The court, in a 6-3 ruling powered by its conservative majority, upheld a Republican-backed Mississippi law that bans abortion after 15 weeks.

The vote was 5-4 to overturn Roe, with Chief Justice John Roberts writing separately to say he would have upheld the Mississippi law but not taken the additional step of erasing the precedent altogether.

The justices held that the Roe v. Wade decision that allowed abortions performed before a fetus would be viable outside the womb - between 24 and 28 weeks of pregnancy - was wrongly decided because the US constitution makes no specific mention of abortion rights.

How did the United States get here?

A draft version of the ruling written by conservative Justice Samuel Alito indicating the court was likely to overturn Roe was leaked in May, igniting a political firestorm.

The ruling authored by Alito largely tracked his leaked draft.

"The Constitution makes no reference to abortion, and no such right is implicitly protected by any constitutional provision," Alito wrote in the ruling.

Roe v. Wade recognised that the right to personal privacy under the US Constitution protects a woman's ability to terminate her pregnancy.

"Roe was egregiously wrong from the start. Its reasoning was exceptionally weak, and the decision has had damaging consequences. And far from bringing about a national settlement of the abortion issue, Roe and Casey have inflamed debate and deepened division," Alito added.

By erasing abortion as a constitutional right, the ruling restores the ability of states to pass laws prohibiting it.

What has happened since Roe v. Wade was overturned?

Already, ten states have legislated to ban abortion in all circumstances, including rape and incest.

An additional four states are likely to adopt the ban soon, while the ban was blocked in three states.

There is restricted abortion access to five states, and two more are expected imminently.

Meanwhile, abortion is likely to remain legal in Democrat-led states.

Interests in vasectomies have skyrocketed since the overturning of Roe v. Wade. On the day and days following the Supreme court's announcement, google search queries for "vasectomy cost", "get a vasectomy" and "vasectomy near me" spiked.

Doctors have reported the same trend with a heightened number of people expressing their interest in getting a vasectomy.

It will apply to states where the procedure remains legal by heading off some potential penalties that women seeking abortion may face, but his order will not restore access to abortion in the states where total bans have gone into effect.

Today, I signed an executive order to protect the reproductive rights of women in the aftermath of the Supreme Court's extreme decision to overturn Roe v. Wade.

It formalizes the actions I announced right after the decision and will add new measures to protect women's health. pic.twitter.com/EujXCMAwFR

How have Americans responded to the overturning of Roe v. Wade?

US President Joe Biden criticised the ruling at the time, saying the health and life of women was now at risk.

"It's a sad day for the court and for the country," Biden said in a White House address after the ruling, which he said was taking the country back 150 years.

Biden promised to go on fighting for reproductive rights but said no executive order can guarantee a woman's right to choose.

He urged voters to send lawmakers to Congress who will work to codify abortion rights as the law of the land.

Biden made a point of calling for any protests to remain peaceful.

"No intimidation. Violence is never acceptable," he said.

Many high-profile politicians and figures have shared their dismay with the ruling.

Overturning Roe and outlawing abortions will never make them go away.

It only makes them more dangerous, especially for the poor + marginalized.

People will die because of this decision. And we will never stop until abortion rights are restored in the United States of America.

Most Americans believe the decision to have a child is one of the most sacred decisions there is, and that such decisions should remain between patients and their doctors.

Today’s Supreme Court opinion will live in infamy as a step backward for women's rights and human rights.

Today, the Supreme Court not only reversed nearly 50 years of precedent, it relegated the most intensely personal decision someone can make to the whims of politicians and ideologues—attacking the essential freedoms of millions of Americans.

"Do I abort this ectopic pregnancy to literally save my life or do I go to jail?"

Question women in America now have to ask.

Thousands of people rallied for abortion rights in Washington DC and other cities after the leak in May, including some protesters at the homes of some conservative justices.

A California man armed with a handgun, ammunition, a crow bar and pepper spray was arrested near Justice Brett Kavanaugh's Maryland home on June 8 and charged with attempted murder.

Hundreds of protesters gathered in front of the Supreme Court to condemn the decision to overturn Roe v. Wade. Next to the protesters, anti-abortion activists celebrated the end of the landmark ruling. https://t.co/847J2vGztX pic.twitter.com/phDsKf8UpM

The number of US abortions increased by 8 per cent during the three years ending in 2020, reversing a 30-year trend of declining numbers, according to data released on June 15 by the Guttmacher Institute, a research group that supports abortion rights.

How are world leaders responding to the overturning of Roe v. Wade?

As news spreads across the globe, world politicians are expressed their thoughts on the historic overturning.

Abortion is a fundamental right for all women. It must be protected. I wish to express my solidarity with the women whose liberties are being undermined by the Supreme Court of the United States.

Though the decision by the Supreme Court to overturn Roe v. Wade was leaked in May, the official ruling drew a wave of strongly worded responses from world leaders on Friday. https://t.co/AmrRnm7ANv pic.twitter.com/3EsfrtBWmb

Australian Prime Minister, Anthony Albanese is yet to make a statement.

Reply
Upvote
1 upvotes
You'd think writing about why they overturned it would be needed to know too.
B
brig 2 months ago

Reply
Upvote
@snorks They need people to fill the factories and consumed to keep their economy in balance.
S
snorks 2 months ago

Reply
Upvote
@brig that's potentially the reason why the states have those laws, that's not why roe was overturned.
M
mb1111 2 months ago

Reply
Upvote
@snorks it’s a shame that womens bodies needed to be the battle ground to test a states rights issue. For me the question was should it be overturned 50 years afterwards?  If they cared as much about the resultant children and the women themselves then I would buy it. However who cares about either once the baby is born?
S
snorks 2 months ago

Reply
Upvote
2 upvotes
@mb1111 if it's a bad ruling it should absolutely be overturned.
Imagine what else they could do if they didn't have to have proper reasoning for their laws?
I don't buy that.
J
johanne 2 months ago

Reply
Upvote
Abortion wasn't anyone else's business back when the US constitution was written; it was just something that happened quietly. A conception wasn't a baby back then until it kicked and periods could be returned to normal if need be before then. So that's the reason it wasn't in their constitution; it was a fundamental human right and not considered worthy of legislation. It's only once the medical profession got hold of pregnancy and childbirth that this changed.
M
mamamia-user-482898552 2 months ago

Reply
Upvote
2 upvotes
@johanne  Kindly don't blame "the medical profession" for this. Doctors are not the ones to blame for the pro-life movement.
S
snorks 2 months ago