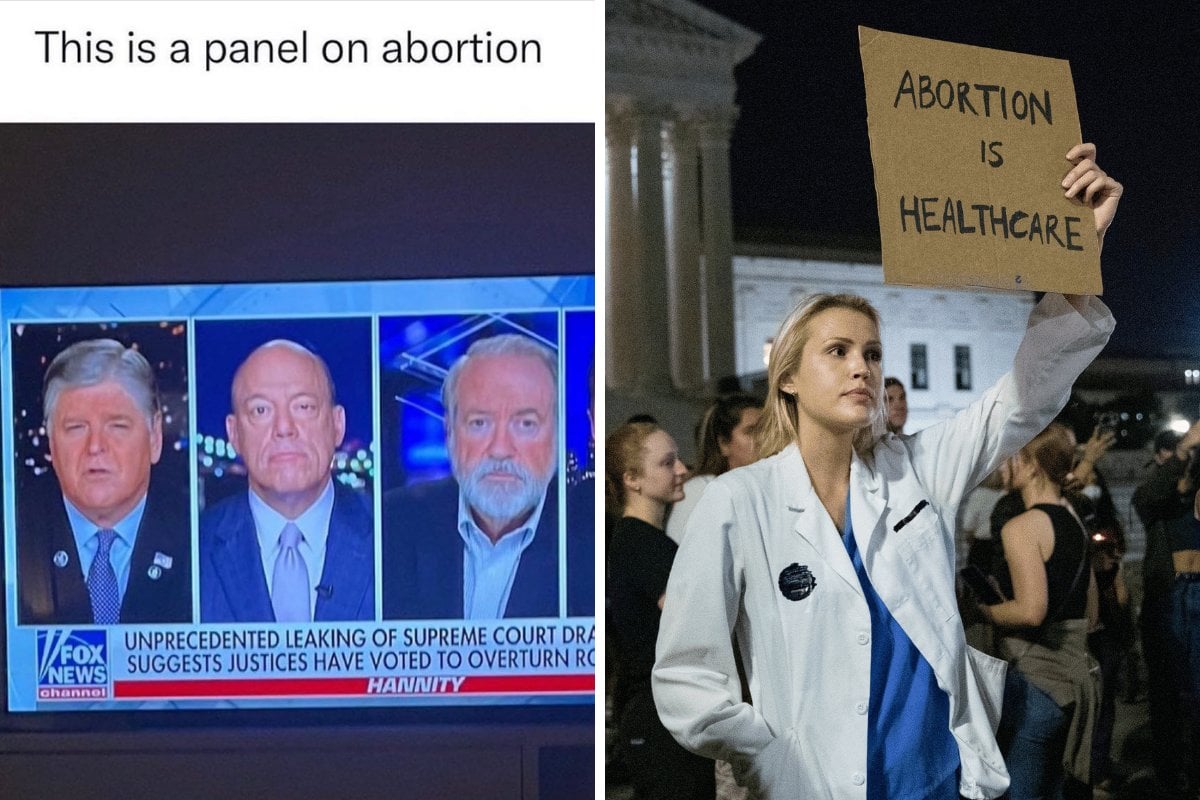 Right now, women's abortion rights in the US are at risk of being set back by 50 years.

This week, draft ruling indicating the US Supreme Court might overturn their famous Roe V Wade decision, which saw abortion legalised in the country, was leaked by news site Politico.

The news has ignited widespread outrage across America, with hundreds taking to the streets outside the Supreme Court calling for the protection of women's abortion rights.

Watch: Is Abortion illegal in Australia? Post continues after video.

However, voices on the other side of the debate are just as loud, with anti-abortion activists calling for further restrictions around the medical procedure.

With the issue hotly debated in America right now, here's everything you need to know about the Roe V Wade decision and what would happen if it gets overturned.

What is Roe V Wade?

Roe v Wade is a landmark decision made by the Supreme Court in 1973 that legalised abortion in the US.

At the time, the judges ruled by seven to two majority, finding that a women's right to an abortion falls within the right to privacy protected under America's Fourteenth Amendment.

However, there was a catch.

While the Roe decision legalised abortion during the first trimester of pregnancy, it stipulated that different states could decide whether abortions were allowed during the second and third trimesters.

Fast forward nearly 50 years and abortion has remained one of the most divisive issues in US politics. Democrats tend to support abortion rights while Republicans tend to oppose them.

A 2021 Pew Research Centre found that 59 percent of US adults believed abortion should be legal in all or most cases while 39 percent thought it should be illegal in most or all cases.

So wait, who exactly is Roe and Wade?

Wade refers to the defendant, Henry Wade, who was the district attorney at the time.

Roe, however, was the pseudonym that pregnant Texan mother Norma McCorvey used when she filed the case challenging criminal abortion laws in 1970.

Three years later, the court handed down its decision in 1973, legalising abortion in the US.

But by that time, Norma had already given birth to her baby and given her up for adoption.

Interestingly, years later in 1994, Norma changed her tune and announced she had become an advocate for an anti-abortion campaign, calling for the medical procedure illegal once again.

Throughout the rest of her life, she attempted to overturn Roe v Wade but was unsuccessful.

However, when Norma knew she was dying, she revealed in the documentary AKA Jane Roe that she only joined the anti-abortion side because she’d been paid to do it, saying she was “a good actress”.

What do we know about the draft legislation and what will happen if Roe V Wade is overturned?

The Supreme Court has since confirmed that the draft ruling is authentic. However, it said the document - authored by conservative Justice Samuel Alito - does not represent "the final position of any member" of the high court.

The court also said it will launch an investigation into how the draft was leaked to Politico.

The Supreme Court has voted to strike down Roe v. Wade, according to an initial draft majority opinion written by Justice Samuel Alito and obtained by POLITICO.

“We hold that Roe and Casey must be overruled,” Alito writes. https://t.co/nl3JFLx9xg

If the Roe decision is overturned, abortion rights would no longer be under federal protection meaning it would be up to states to ban or allow the procedure.

However, Republican-led states have passed various abortion restrictions in defiance of the Roe precedent in recent years and could try to enact a nationwide abortion ban.

"If the report is accurate, the Supreme Court is poised to inflict the greatest restriction of rights in the past fifty years - not just on women but on all Americans," the top two Democrats in Congress - House of Representatives Speaker Nancy Pelosi and Senate Majority Leader Chuck Schumer - said in a joint statement.

In response, US President Joe Biden has vowed to try to protect abortion rights and said voters will need to elect more members of Congress who support abortion rights so that they can pass legislation making Roe v Wade the law of the land.

"At the federal level, we will need more pro-choice Senators and a pro-choice majority in the House to adopt legislation that codifies Roe, which I will work to pass and sign into law," he said.

The abortion ruling is due by the end of June.

How are people reacting?

Since the draft legislation was leaked, people from both sides of the debate have taken to the streets in protest.

On Monday night, demonstrators outside the Supreme Court voiced a mix of support for and opposition to ending the constitutional right to abortion nationwide.

Several dozen anti-abortion activists dominated the protests early in the day, chanting through megaphones: "Pro-choice is a lie, babies never choose to die", and "Abortion is violence, abortion is oppression".

Abortion rights advocates shouted back, "Off our bodies" and "abortion saves lives". Others held signs reading, "Abortion is healthcare" and "Abortion is not a dirty word". 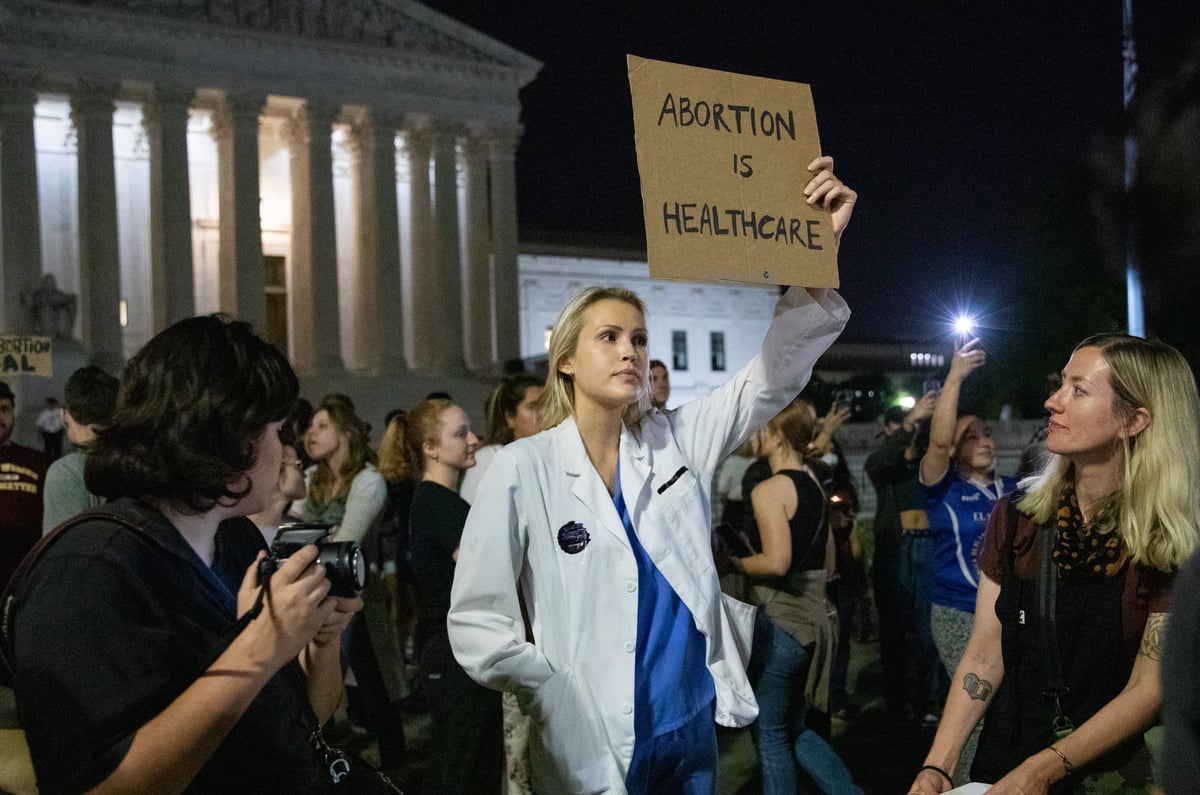 Public figures and political leaders such as Michelle and Barack Obama have also weighed in on the decision.

"Today, millions of Americans woke up fearing that their essential freedoms under the Constitution were at risk," the couple wrote in a joint statement.

"If the Supreme Court ultimately decides to overturn the landmark case of Roe v. Wade, then it will not only reverse nearly 50 years of precedent — it will relegate the most intensely personal decision someone can make to the whims of politicians and ideologues.

Many panel shows, in both the US and across the globe, are airing their opinions on the topic too. Fox News coverage opted for an all-male panel to discuss the right to abortion – triggering another wave of frustration from women watching on.

Former US Secretary of State Hillary Clinton wrote on twitter "this decision is a direct assault on the dignity, rights,and  lives of women, not to mention decades of settled law".

Not surprising. But still outrageous.

This decision is a direct assault on the dignity, rights, & lives of women, not to mention decades of settled law. It will kill and subjugate women even as a vast majority of Americans think abortion should be legal. What an utter disgrace. https://t.co/TNo1IX3Tl4

Meanwhile, Democratic Senator Elizabeth Warren has called for "the millions who support the Constitution and abortion rights to stand up and make their voices heard. We're not going back - not ever".

Reply
Upvote
1 upvotes
You can buy a gun and shoot someone in America with little chance of being prosecuted, but can't control your own medical care. Welcome to Gilead.
B
bowerbird 14 days ago

Reply
Upvote
2 upvotes
This is so worrying, for so many reasons. To regress 50 years at the behest of fundamentalists is terrifying. I’ll never take my freedoms for granted again.
Ps: make sure you check which camp your local candidates are in before voting this election. US might feel far away, but their ideologies are not!

Reply
Upvote
@bowerbird I think the scariest part for me that something like 70% of Americans are actually pro-choice. To have so many people's rights taken by a powerful minority is worrying.
S
snorks 12 days ago