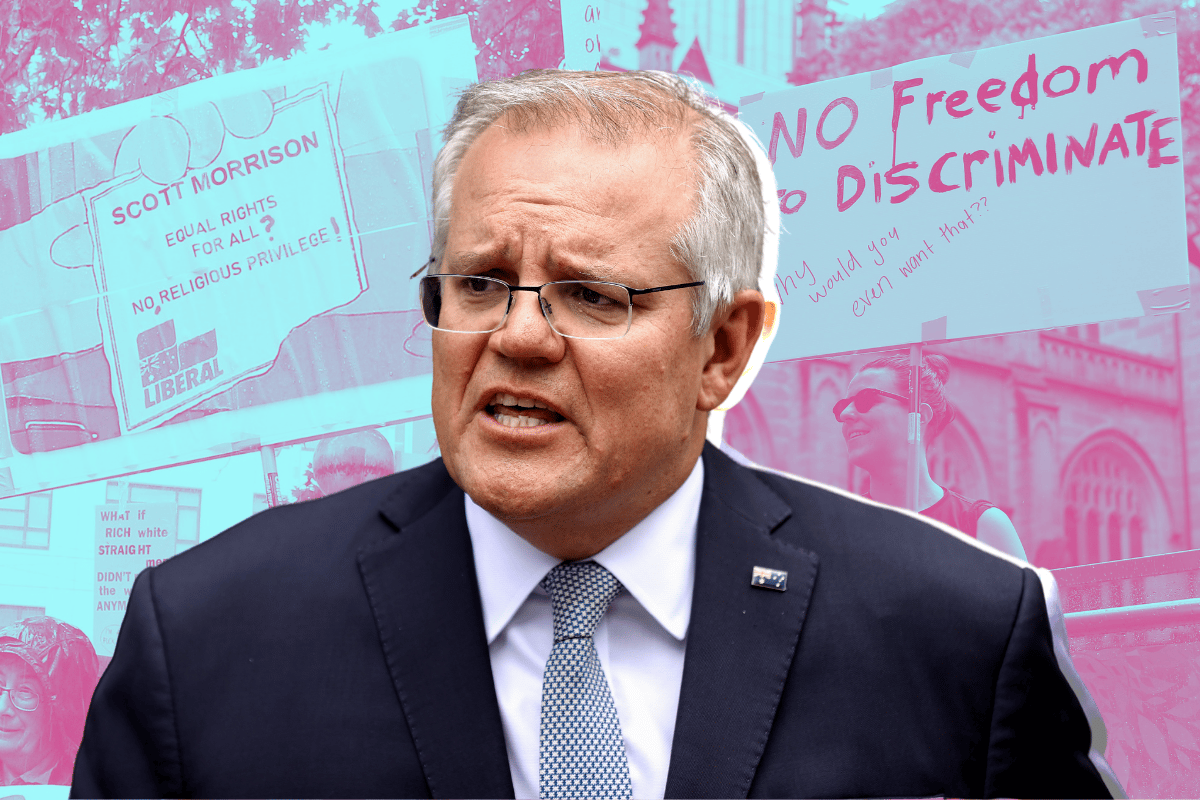 After years of debate, the government has introduced its controversial religious discrimination bill in parliament.

The long-promised bill, which was introduced by Prime Minister Scott Morrison on Thursday, will ensure discrimination on the grounds of religious belief or activity will be made unlawful in the areas of employment, education and the provision of goods and services.

"This bill is a protection from the few who seek to marginalise and coerce and silence people of faith because they do not share the same view of the world as them," said Morrison.

"Australians shouldn't have to worry about looking over their shoulder fearful of offending an anonymous person on Twitter... or transgressing against political or social zeitgeists.

"We have to veer away from the artificial phoney conflicts, boycotts, controversies and cancelling created by anonymous and cowardly bots, bigots and bullies."

The government has ensured that the bill will not allow discrimination on the basis of age, disability, race or sex.

However, there are concerns the bill will do exactly that, with many calling out the bill's contentious clause that protects people who make statements about their religious beliefs.

It is expected the bill won't pass by the end of this year, as it will go to a Senate inquiry.

Here's a rundown of everything you need to know about the religious discrimination bill.

What is the religious discrimination bill?

Before we get into what the bill is, let's talk about why it exists in the first place.

The Coalition government promised the religious discrimination bill back in 2019 following the legislation of same-sex marriage in 2017.

At the time, there were concerns that institutions like schools and workplaces wouldn't be able to freely express their faith and needed protection.

Since then, the bill has been drafted three times, with a new 'watered down' version finally introduced to parliament today.

Here's a brief breakdown of the revised bill and what it means for Aussies.

This is one of the more controversial elements of the bill.

Under the bill, a statement of belief, in good faith, would not be discriminated against under any Australian anti-discrimination law.

However, this would not apply to statements that are malicious, or which a reasonable person would consider would threaten, intimidate, harass, or vilify a person or a group of persons.

The bill will restrict the ability of bodies to impose standards of behaviour on members that would prevent them from making a statement of belief in their private capacity.

The bill will allow religious organisations such as schools to give preference to people of the same religion in decisions about employment.

"A Sikh should not be discriminated against because of the turban they wear ... nor a Jewish school seeking to employ someone of their faith, if that faith is their preference," Morrison said on Thursday.

Amanda Stoker, who is assistant minister to the attorney-general, was circumspect when asked if a Christian school could refuse to hire a gay teacher under the bill.

"That is something that would depend a great deal upon what that school is prepared to be up front with the community about it," Senator Stoker told ABC radio.

Attorney-General Michaelia Cash also confirmed the bill would declare that no child should be "suspended or expelled from school on the basis of their sexuality or gender identity".

In the revised version of the bill, the government has removed a clause that would have allowed health providers to refuse treatment on the basis of "conscientious objection".

This means patients can't be refused treatment because of their religion.

What does the bill have to do with Israel Folau?

There's been a lot of talk about a so-called 'Folau clause', which would have given people in large companies legal protection from termination if they expressed their religious beliefs.

The clause was named after former rugby league footballer Israel Folau, who was sacked by Rugby Australia in 2019 over social media comments he made about gay people.

The revised bill has seen this clause axed.

However, it still declares that bodies are banned from setting professional conduct rules that prohibit people from making statements of belief in their private capacity.

What are people saying about the bill?

The prime minister told his party room that the bill was about tolerance and balancing freedom with responsibility.

"It is a religious discrimination bill, not a religious freedom bill," he told coalition members.

He also described the bill as a shield and not a sword.

However, crossbencher Pauline Hanson indicated she wouldn't support the bill in its current form, while Rex Patrick and Rebekha Sharkie didn't see the need for it.

On Tuesday, Equality Australia, which lobbies for the rights of LGBTIQ+ people, shared their concerns that some of the "worst elements" of the bill remained.

Among the group's objections was the clause for people making statements about their beliefs.

"This will allow someone to be given a defence to a discrimination complaint if they say offensive, insulting, inappropriate, unacceptable things," chief executive Anna Brown told ABC radio.

"In broad terms, it overrides existing protections for vulnerable groups, it compromises access to judgement-free health care and inclusive workplaces."

Brown was concerned a nurse, for example, could be protected if they told someone with HIV the illness was a punishment from God.

"That person on the receiving end (would be, under the bill) prevented from bringing a complaint against the person that made that statement because their statement of belief is protected," she said.

'It allows discrimination in the name of faith.'

Australian Greens LGBTIQA+ spokesperson, Senator Janet Rice, has also called out the bill for "allowing discrimination in the name of faith".

"The statements of belief clause is an unprecedented overreach by the government that is unlike any other federal anti-discrimination law, and will override hard-won state and territory protections for women, disabled people, minority faith communities, First Nations & LGBTIQ+ people. Basically, all of us."

"Any bill that enables discrimination against LGBTIQA+ people, women, people with disabilities, minority faiths, or First Nations people is unacceptable.

"Our laws should protect all of us equally. Morrison's Religious Discrimination Bill will do the opposite... The Liberals are trying to increase discrimination, not reduce it."

gu3st 2 months ago
Reply
Upvote
5 upvotes
Ask yourself, what would Jesus want here? Tolerance or hate speak?
Morrison's political radar, ever weak, is truly throwing him some bad signals as his approval plummets.
This bill is very off key to Australians who like their religion and state like Gwyneth and Chris. Consciously uncoupled.
Voting down the motion to send Porter's million to the parliamentary integrity commission.
Voting against discussing a federal anti-corruption body, with some of MPs crossing the floor. Those with a conscience and nothing to hide, it would seem.
That stuff points to pretty much one conclusion. Much to hide that hasn't been in the voters' interests. At all.
Morrison is putting his name to all these dubious motions and shaking an already shaky reputation  regarding honesty.
L
laura__palmer 2 months ago
Reply
Upvote
2 upvotes
So people who are religious aren't allowed to be discriminated against, but they are allowed to be discriminatory. Got it.
M
mamamia-user-482898552 2 months ago
Reply
Upvote
2 upvotes
@laura__palmer Right? "In good faith" they can say anything they like, in the name of Jesus. It's disgusting.
M
mb1111 2 months ago
Reply
Upvote
2 upvotes
@mamamia-user-482898552 could also be in the name of other religions that are not Christian.  It is important not to be biased.
M
mamamia-user-482898552 2 months ago
Reply
Upvote
4 upvotes
@mb1111 Given that this bill allows for judgement of what you can and can't say to be based on what "reasonably could be assumed" to be "free speech" rather than provocative or hurtful rhetoric, forgive my cynicism when I suggest that what a man says on behalf of Jesus will be far more tolerated than what a man invokes in the name of Allah. The double standard already exists. And this PM has real skin in this game - he plays his Hillsong card openly.
C
cat 2 months ago
Reply
Upvote
1 upvotes
@mb1111 where was this legislation when anti-muslim rhetoric was pervasive and people wearing hijabs were being attacked on public transport? Let's not pretend this is actually about religious protections and tolerance.