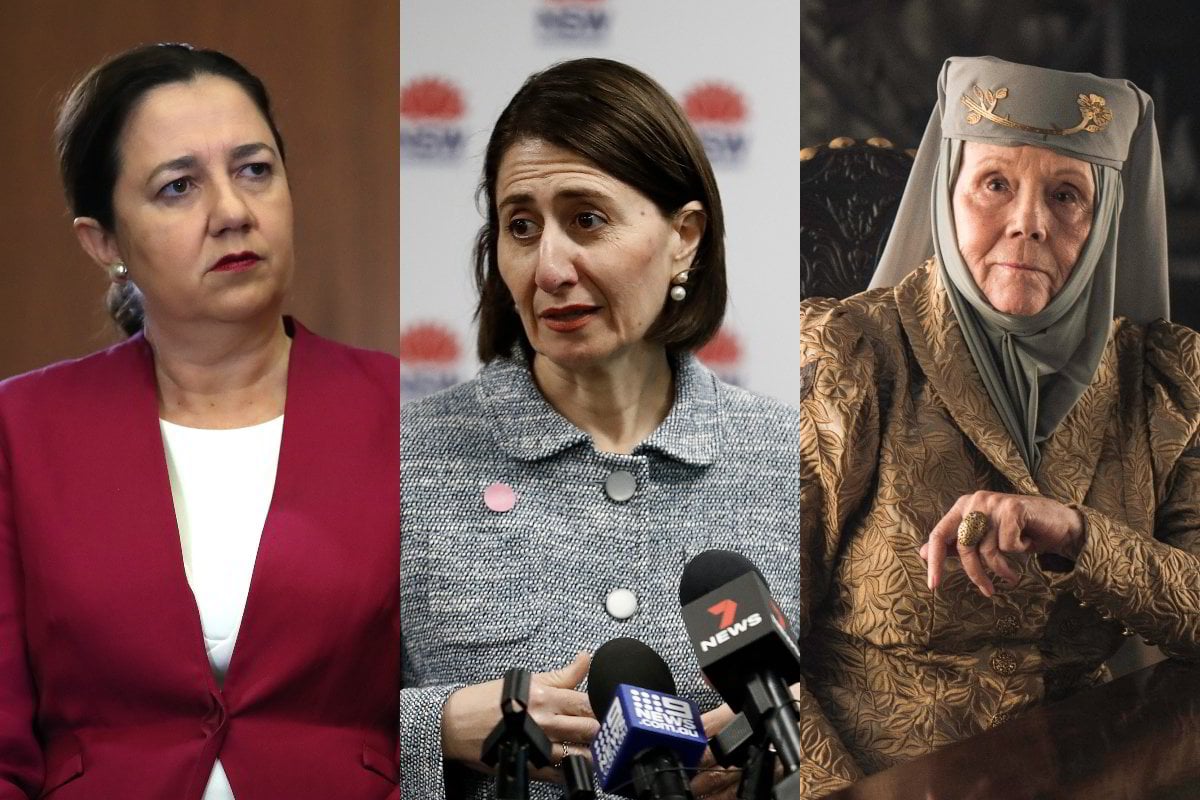 Regional Victoria edges towards the easing of virus restrictions.

Regional Victoria could be just days away from having COVID-19 restrictions wound back.

The state's coronavirus death toll surpassed 700 on Thursday but, with just 72 active cases and its fortnightly daily average sitting at 4.5, Premier Daniel Andrews said regional restrictions could be eased by late next week.

"Regional Victoria are quite close to being able to take perhaps not just one step, but two," he said.

The premier, meanwhile, is refusing to budge on Melbourne's lockdown curfew, despite a second senior official distancing himself from the controversial measure. 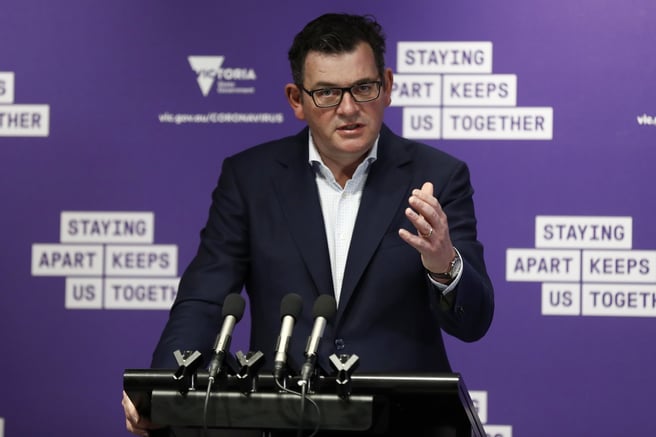 Victoria's roadmap out of lockdown: What we learnt from Daniel Andrews' press conference.

The government is already under fire for its botched hotel quarantine program and much-maligned contact tracing efforts, while the newly announced COVID-19 roadmap has also sharply divided opinion.

The survey conducted by TKW Research found just 58 per cent of 300 frontline health workers were satisfied with his handling of the pandemic, down from 86 per cent in April.

While the curfew's start time will be pushed back from 8pm to 9pm on Monday, it is set to remain until October 26 as part of the roadmap.

Victoria recorded nine deaths on Friday. The fatalities took the state toll to 710 and the national figure to 797.

Queensland Premier Annastacia Palaszczuk says the prime minister and the state opposition are using people's personal tragedies involving border restrictions to subject her to the worst bullying she's seen in her lifetime.

Ms Palaszczuk lashed out at Scott Morrison after Liberal National Party leader Deb Frecklington asked her about the case of a Canberra woman who tried but failed to enter the state in time to see her dying father.

Queensland Premier Annastacia Palaszczuk: "I will not be bullied nor will I be intimidated by the Prime Minister of this country." #auspol #qldpol pic.twitter.com/sXI6zHXMDI

She's now in quarantine and missed his funeral Thursday in Brisbane after health officials told her she wasn't supposed to even be in Queensland because her right to enter didn't cover her father's death.

Ms Palaszczuk revealed the prime minister had called her to speak about the case before the funeral.

"It is absolutely not acceptable for the leader of the opposition to do what she is doing today: a co-ordinated campaign with the prime minister's office is disgusting and it is demeaning," Ms Palaszczuk told state parliament.

"I would hope that the prime minister would work in a cooperative matter with everyone across this country and this divisiveness, and these fights, and this intimidation, and this bullying is the worst I've ever seen in my lifetime."

Ms Palaszczuk reiterated the state's chief health officer was in charge of assessing medical exemptions to cross the border.

She said the state's hospitals were already treating 1000 NSW residents a week but admitted that many people were missing funerals.

All of NSW and Victoria are currently categorised as COVID-19 hotspots.

"I'm sure the police are pulling their hair out having to implement these stupid rules that are dictated to them by health officials," he told Sydney radio station 2GB.

He accused "faceless bureaucrats" of making decisions that exacerbated the stress of the pandemic.

"It's all for political reasons and unfortunately a lot of people are suffering from the consequences," he said.

READ MORE: Border rules and a $16,000 bill stood between a dying father and his children. That's about to change.

NSW Nationals MPs have been given until 9am Friday to backflip on a threat to move to the cross bench or face being sacked from the ministry.

NSW Premier Gladys Berejiklian issued the ultimatum to Deputy Premier John Barilaro and his Nationals colleagues after they threatened to mutiny because of a dispute over the state's koala protection policy.

The NSW Nationals leader blindsided Ms Berejiklian when he announced his MPs will abstain from voting on NSW coalition government bills as they fight changes to the protection plan.

The move effectively robbed the Berejiklian government of its majority and provoked a stern response from the premier.

Absolutely sizzling statement from Gladys Berejiklian in response to the NSW Nationals threat to blow up the joint.
“If required, I will attend Government House tomorrow and swear in a new Ministry.” pic.twitter.com/jt27GYAtUw

In a media statement Ms Berejiklian said "it is not possible to be the deputy premier or a minister of the Crown and sit on the crossbench".

She said Mr Barilaro and his Nationals ministerial colleagues had until Friday morning to declare support for her government or be sacked from cabinet.

"If required, I will attend Government House tomorrow and swear in a new ministry," Ms Berejiklian said.

"It is long-established convention that members of cabinet must support government legislation."

The ultimatum forced the NSW Nationals into an emergency partyroom meeting on Thursday night. However, MPs reportedly failed to reach any resolution, but would continue discussions ahead of Friday's deadline.

The Nationals are concerned the policy limits land use on farms and the ability to rezone areas for development as more trees are classed as koala habitat, which will restrict the clearing of land.

A coroner will investigate the death of a man aged in his 20s who was previously reported to be Australia's youngest COVID-19 fatality.

The man, who has not been publicly identified, has been categorised as a 'reportable death' by the Coroners Court of Victoria, it was revealed on Thursday.

Deaths confirmed to be the result of COVID-19 and other illnesses are not deemed a reportable death, the coroner's office confirmed.

Reportable deaths include cases of suspected violence, accidents, homicide, suicide, or instances involving drugs, alcohol and poison or when the person's identity or cause of death is unknown, the coroner's website states.

The man was reported as a coronavirus victim on August 14 by Victoria's premier Daniel Andrews.

At the time, Mr Andrews noted the death might be further investigated, amid some doubt about whether he died with or from COVID.

British actress Diana Rigg, who became a 1960s style icon as secret agent Emma Peel in TV series The Avengers has died at the age of 82.

"It is with tremendous sadness that we announce that Dame Diana Rigg died peacefully early this morning," Rigg's agent Simon Beresford said in a statement.

"She was at home with her family who have asked for privacy at this difficult time," he added, calling her “an icon of theatre, film and television".

Be a dragon.
The realm will always remember Diana Rigg.

Rigg's daughter, Rachael Stirling, said she died of cancer that was diagnosed in March.

"[She] spent her last months joyfully reflecting on her extraordinary life, full of love, laughter and a deep pride in her profession. I will miss her beyond words."

Looking back on the life and career of Dame Diana Rigg, best known for her iconic roles in "Game of Thrones," "The Avengers," and 'On Her Majesty's Secret Service.' #RIP 💙 pic.twitter.com/RWTfPt9QvZ

The pair were an impeccably dressed duo who fought villains and traded quips in a show whose mix of adventure and humour was enduringly influential.

Rigg also starred in spy thriller On Her Majesty's Secret Service as the only woman ever to marry James Bond.

In later life, she played Olenna Tyrell in Game of Thrones.

AstraZeneca's chief executive Pascal Soriot says it should know before the end of the year whether its experimental vaccine will protect people from COVID-19 if the British drugmaker is allowed to resume trials which were paused this week.

It suspended the late-stage trials after an illness in a study subject in Britain.

Soriot said during a call on the vaccine, which the World Health Organisation (WHO) has flagged as the most promising in combatting coronavirus, that it was very common for a trial to be suspended, the difference being that the world was watching this one.

The CEO said AstraZeneca did not know the diagnosis for the volunteer in the trial, adding that it was not clear if they had transverse myelitis and more tests were needed.

Soriot said the diagnosis would be submitted to an independent safety committee and this would usually then tell the company whether trials can be resumed.

- A large fire has erupted at Beirut port, sending a huge column of smoke over the Lebanese capital just weeks after a massive blast devastated the port and surrounding residential area. The army said a store of oil and tyres had burst into flames, although it said the cause was not immediately clear.

- Finnish Prime Minister Sanna Marin is self-isolating after the country's COVID-19 warning app alerted her of potential exposure to the virus.

- France has recorded almost 10,000 new COVID-19 cases, its highest ever single-day total, a day before a cabinet meeting that may consider imposing new local lockdowns to curb the spread.

- India confirmed another record number of daily coronavirus infections, recording 95,735 new cases in the past 24 hours.

Reply
Upvote
Article re Qld premier. I can believe the bullying claim I’m afraid. I have been on the receiving end of his governments bullying and harassment methods. He is not a nice person. As Turnbull said, a control freak. Their government is a dictatorship and that is really not good. It is the same trait we saw with robo debt, that was bullying. Also, when he is determined to deport people unfairly. It is not the compassionate way to go about things. The thing people need to grasp in all of this, the Premiers that appear hard are trying to keep people safe. If the young woman (and I feel for her) had gone to the said funeral and infected others and deaths resulted I am sure those families would have been annoyed that it was allowed to happen. Being realistic the man had passed, he wouldn’t know if she was there or not. A lot of funerals have been missed by people. They were allowing a visit while he was alive and unfortunately she didn’t make it. That was the important exemption given. People have to get a grip this is a deadly and serious virus.

Reply
Upvote
@gypsy it’s pretty disgusting for ScoMo to cry over how cruel Qld is while his government is regularly refusing permits for people to enter or leave Australia for funerals. He’s stunningly hypocritical and not nearly as convincing as he thinks he is.
And that’s a good point about the funeral- a family member of mine from Qld was granted compassionate entry to WA for a funeral a few months ago, when QLD was Covid free. He had tests at each e d etc, but word got out that someone was coming from the east coast and only 6 people ended up attending the funeral- my poor relative was devastated that his presence basically up cancelling the event.

Reply
Upvote
@gypsy your argument about the young woman missing her father's funeral might have held water, except for the statement by the Qld Premeir and her CMO, that wealthy people were welcome to her state as they 'brought in money'.   I am glad the Prime Minister 'bullied' her, but it seems her office was inundated with emails and messages 'bullying' her as well.

Reply
Upvote
@guest2 you mean because Tom Hanks was allowed to enter? He went into quarantine the same as anyone else, even though he’s already had the virus and is probably immune. The issue was that this lady hadn’t finished quarantine.

Reply
Upvote
@cat Tom Hanks was allowed to quarantine with his family in a luxury resorts, much like the AFL players.  The ACT has had no active cases for two months, so that young woman was at far less risk of bringing Covid 19 to QLD than Tom Hanks and his entourage from California.  There are two rules in Qld - one for the rich and famous and one for hoi polloi and this has been admitted by the Qld Premier and her side kick, the CHO.