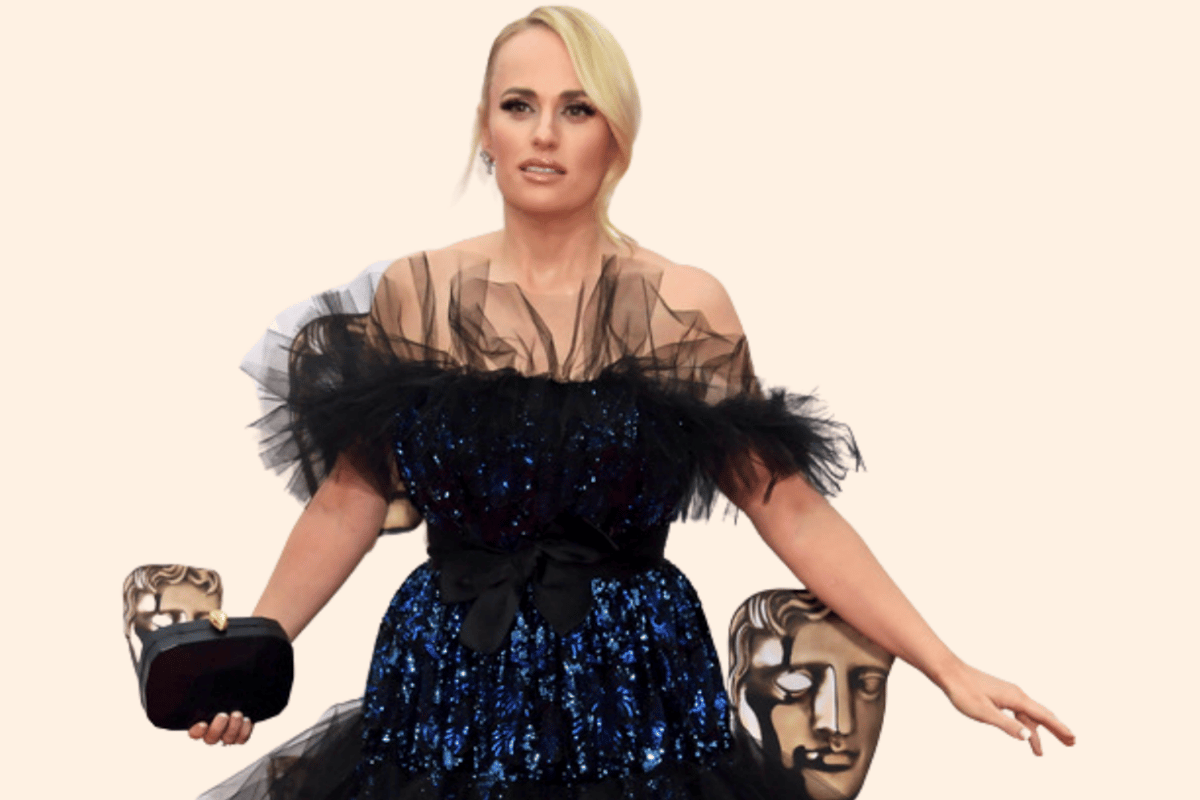 Content warning: this article deals with disordered eating and may be triggering for some readers.

Rebel Wilson is in an impossible situation.

The actress, writer, and producer lives and works in the public eye, and with that comes an unfortunate yet never-ending commentary around her body.

So when she decided to make changes to her body, she was left with two equally undesirable choices.

She could opt to hide herself away from the glare of cameras and red carpets until eventually, photos would emerge of her changed form, inviting the vice-like grip of extreme publicity to tighten even further around her.

Or she could make her intentions public from the start, documenting her actions as a way to loosely control a narrative that was sure to build up around her at any cost.

She opted for the latter, and swiftly flooded her social channels with images and updates of her 'Year Of Health'.

And this is where the trouble began.

Listen to The Spill hosts discuss why we should not be applauding Rebel Wilson at the BAFTA's.

Not trouble with Rebel making decisions about her own body of course, but trouble with the language that sprung up around it, with words that fell out of her own mouth, the views that filled the comments section on her Instagram feed, and the salacious headlines championing one troubling truth - that there is no higher achievement an already successful woman can accomplish than making herself smaller.

This week Rebel Wilson hosted the prestigious British Academy Film Awards for the first time, tapped for the job due to her performance skills and her ability to deftly command the attention of an audience.

She had presented at the awards a handful of times before and made such an impact that she was applauded for 'breathing life back into the BAFTAs'. On the whole, her stint on the 2022 stage was a success.

Except for an opening monologue joke and the accompanying photo that flashed across the Royal Albert Hall's giant screens as she made it.

“I might look a bit different from the last time you guys saw me here," Rebel began, as an image of her presenting at the awards in 2020 appeared on the screens. "This was me two years ago and since then I’ve done quite a transformation.”

“Everybody is asking me, ‘why did you lose weight?’ Well, clearly, it was to get the attention of Robert Pattinson…”

“Just joking,” she continued. “Guys, seriously, I did not lose weight just for a guy. As if. I did it to get more acting roles. I am so excited I can play the non-funny love interest in an Adam Sandler movie."

The first instinctual reaction to this is that she needed to make the joke before anyone else could. Knowing that the news coverage of this glitzy event would reference her weight in some way, much like her choice to document her transformation from the start, she made a decision to flip it to her advantage.

Yet there's another side to this story that we cannot look away from... and that is because just for a moment - a single second in fact - the shiny veneer that Hollywood has erected over itself to stave off criticism, lifted.

Meaning those same entertainers who post body confidence images to their socials profiles, who reveal their insecurities in glossy magazine spreads or whose interviews go viral when they champion different body forms being given a spot on the main stage, all instinctually gave their biggest round of applause of the night to a glorified before-and-after image.

Cementing the idea that, when it comes to showing our true colours as a society, nothing evokes a sense of achievement quite like a 'journey' that ends with a smaller body.

When looking at the two images, it's as important not to vilify the "new" Rebel as it is to not label the "old" Rebel as a failure. But at the same time, there was an important grain of truth sitting within that turn of phrase she rattled off as a joke.

It's a truth that slams every plus-size person in the chest with a level of brutal finality.

The fact that Rebel Wilson is now seen as a better, more worthy person because of her weight loss.

No one wants to say those exact words out loud of course. If you're any kind of decent human being, they should stick in your throat like a wad of barely chewed gum - but the facts speak for themselves.

In this new form, the media attention around Rebel has shifted. Photos of her at events now fill news feeds in a way they never did before and designers who would have previously barricaded their studio doors rather than let her inside, are now offering up designer gowns. 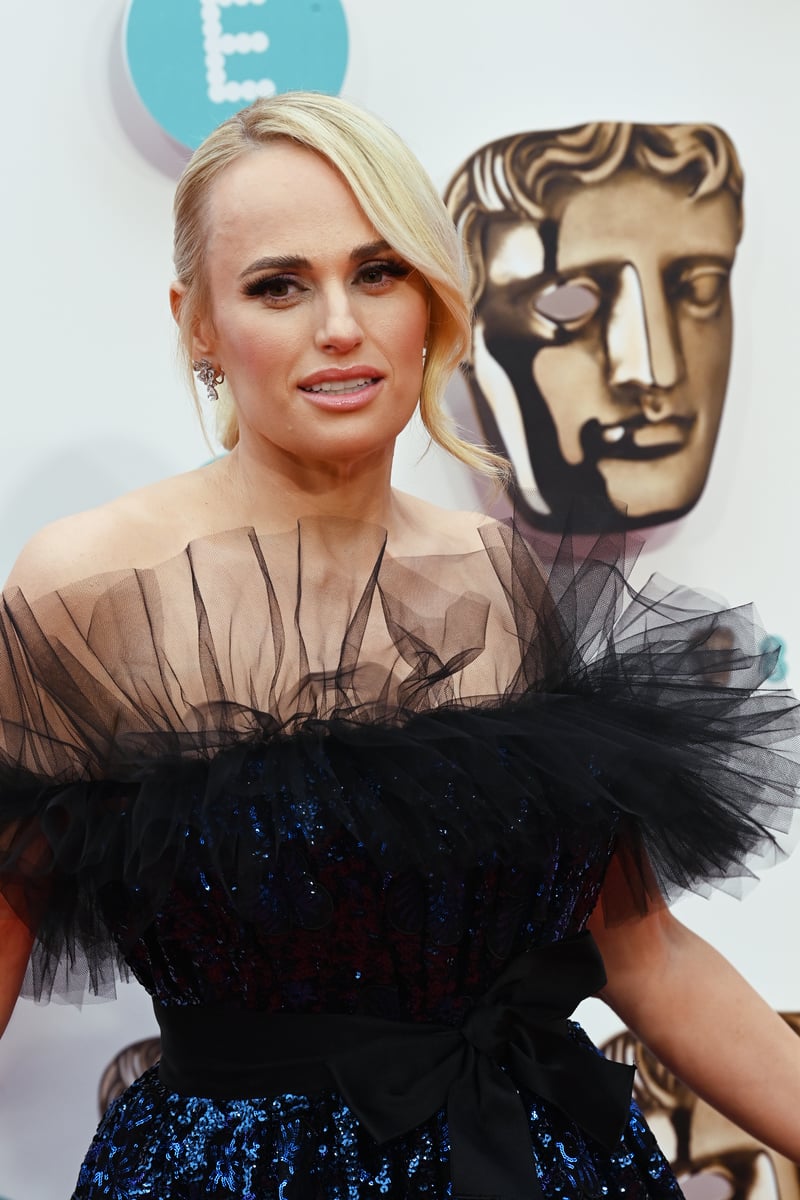 This week Rebel Wilson hosted the prestigious British Academy Film Awards for the first time, tapped for the job due to her performance skills and her ability to deftly command the attention of an audience. Image: Getty.

In the lead-up to hosting the BAFTAs, Rebel told The Hollywood Reporter that her joke about losing weight for roles was very much anchored in reality.

"I found that with the British drama The Almond and the Seahorse — I’m not sure I would have been cast in that when I was a bigger girl because they kind of stereotype you a bit more when you’re bigger," she said. "But when I started as an actress I really wanted to be the next Dame Judi Dench and do really serious stuff. And so now I’m returning to that a bit, which is great, but still doing comedies that I love. But yeah, it has definitely diversified my stocks."

At this stage, it's important to note that no joke or photo makes it onto the BAFTAs stage without a team of people approving it, so the choice to show a 'before' image with the intention of inciting a round of laughter and applause does not sit on the shoulders of Rebel Wilson alone.

However, she is also not entirely without blame.

Yet it's harder to hold Rebel to account for her actions, due to the simple fact that we are so used to watching women and their bodies continuously beaten down in the public sphere that our natural instinct is to protect them and shift the blame away to a more powerful party.

In that same Hollywood Reporter article Rebel said, "I used being a plus-size girl to my advantage in many comedy movies," and no one can fault her for finding a way to work a system that was stacked against her.

What I can fault her for is the damaging legacy she left behind, and one that she fails to acknowledge.

So now when she alludes to feeling like a more worthy person because of her weight loss, or makes jokes like this on a global stage, it's difficult not to feel angry that she cemented these traits in pop culture and now celebrates breaking free of them.

It's an act that reeks of internalised fatphobia - a negative inner attitude against larger bodies that is societally bred into us all.

It's this internalised fatphobia that drove Rebel to know that people would applaud this joke, and her choice to speak about changing her body.

It's what led that Hollywood audience to react with thunderous applause, and it lurks within every person out in the real world who was faced with this image and body rhetoric.

Rebel Wilson has the right to change her body in any way she likes, but when she takes part in a public act that incites fatphobia, it's an action we need to call out.

In the hope it will never be repeated.

M
mb1111 2 months ago
Reply
Upvote
5 upvotes
Ideally she would have walked out and nothing would have been said. However I think she knew that whatever course she took that there would have been comments. She tried to own them. Myself as someone with fluctuating weight I never say anything. I feel very uncomfortable when people make comments on my body. However they always, always do. I also think that calling out Rebel for her fat phobia is cruel too.
News
General
Opinion
True Crime
Politics
Sport
Explainer
Entertainment
Celebrity
Reality TV
Movies
TV
Books
Rogue
Royal
Lifestyle
Beauty
Fashion
Weddings
Home
Wellness
Health
Fitness
Travel
Food
Parents
Before The Bump
Pregnancy
Baby
Kids
Teens
School
Parent Opinion
Work & Money
Money
Finance
Career
Lady Startup
Relationships
Sex
Dating
Separation
Friendship
Family
Real Life
Couples