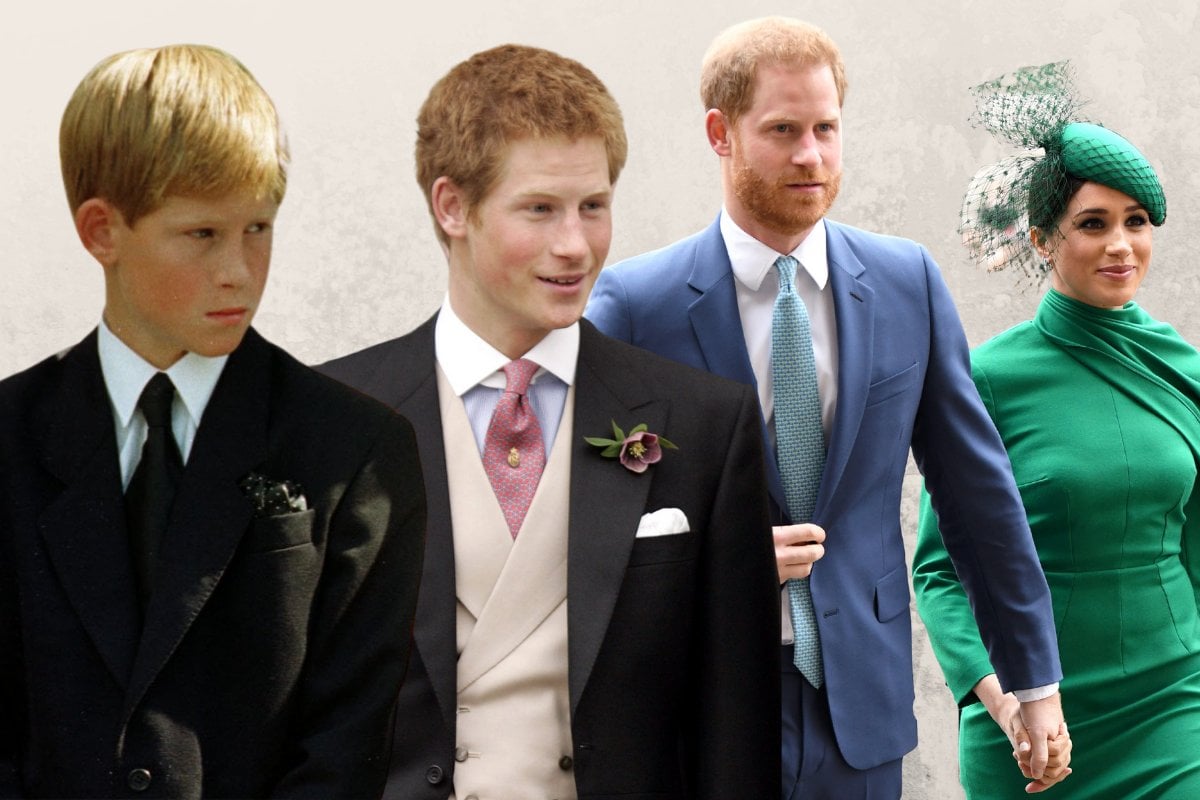 Prince Harry has always been the black sheep.

The 'party boy.' The one pushing boundaries. The one breaking with royal protocol every chance he gets.

We watched him, at age 12, walk behind his mother's coffin - thrust into the same unforgiving media spotlight the late Diana, Princess of Wales, tried so fervently to shield him from.

And as he's grown from a boy to a man to a father in the headlines, one thing has never wavered: Harry's discomfort with being a prince.

Reflecting on his mother's funeral in 2020, Harry told Newsweek that day was torturous - and not just because he was burying his mum.

"My mother had just died, and I had to walk a long way behind her coffin, surrounded by thousands of people watching me while millions more did on television. I don't think any child should be asked to do that."

It would have been torturous for his brother William too, but Harry has always displayed a more obvious and rebellious rejection of royal protocol than his sibling. 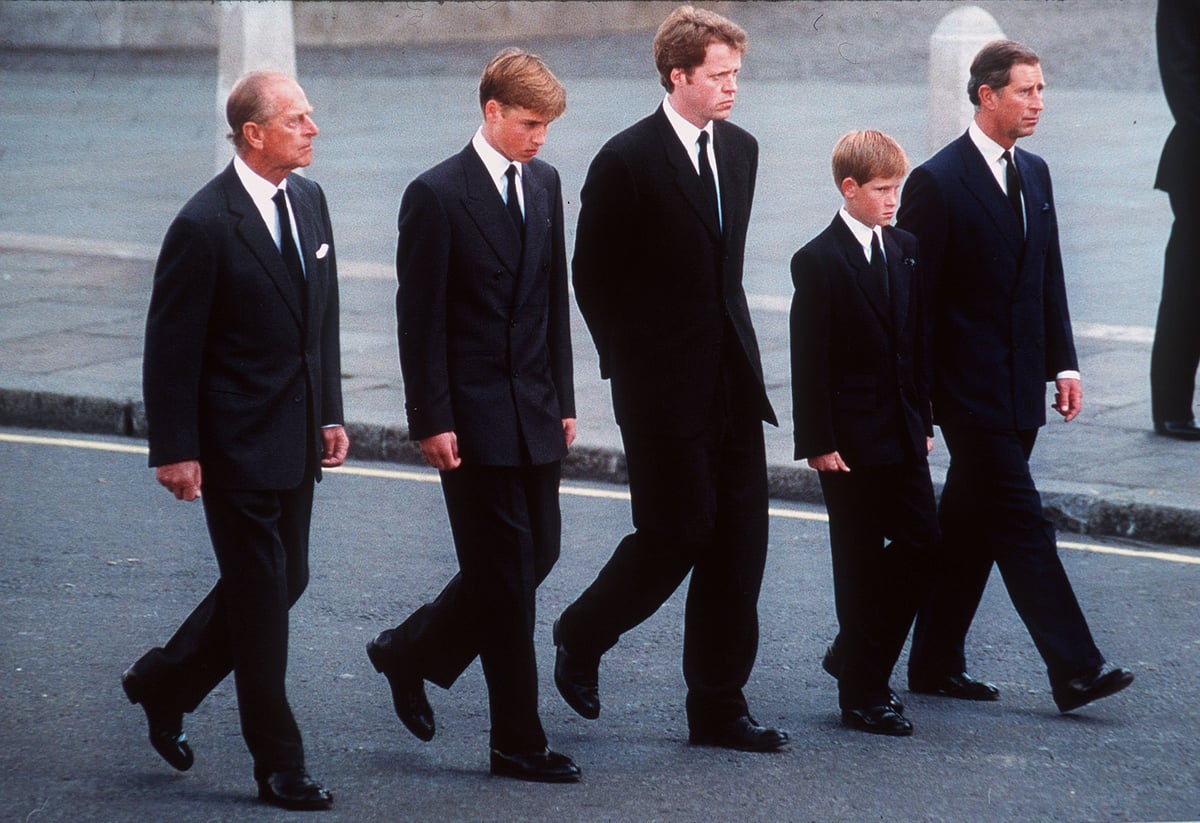 The Duke of Edinburgh, Prince William, Earl Spencer, Prince Harry and the Prince of Wales follow the coffin of Diana, Princess of Wales in September 1997. Image: Anwar Hussein/WireImage/Getty.

Through his teenage years and 20s, Harry lived his life by his own rules. We watched him get naked in Vegas, make out with girlfriends on the top of cars, stay up until 3am the morning before his brother's wedding, and admit to smoking marijuana as a teen.

There was the time he was rightfully condemned for dressing up as a Nazi for a party. The time he got into a fight with a photographer while yelling, "Why are you doing this? Why don't you just leave me alone?" The time he let loose in Croatia and was photographed jumping in a pool boozed up and fully clothed.

Over the years, Prince Harry has been forced to issue many, many apologies, because when you're royal you simply don't get to play by the same rulebook as us common folk. You don't get to make your mistakes behind closed doors. Or kiss your girlfriend in public. 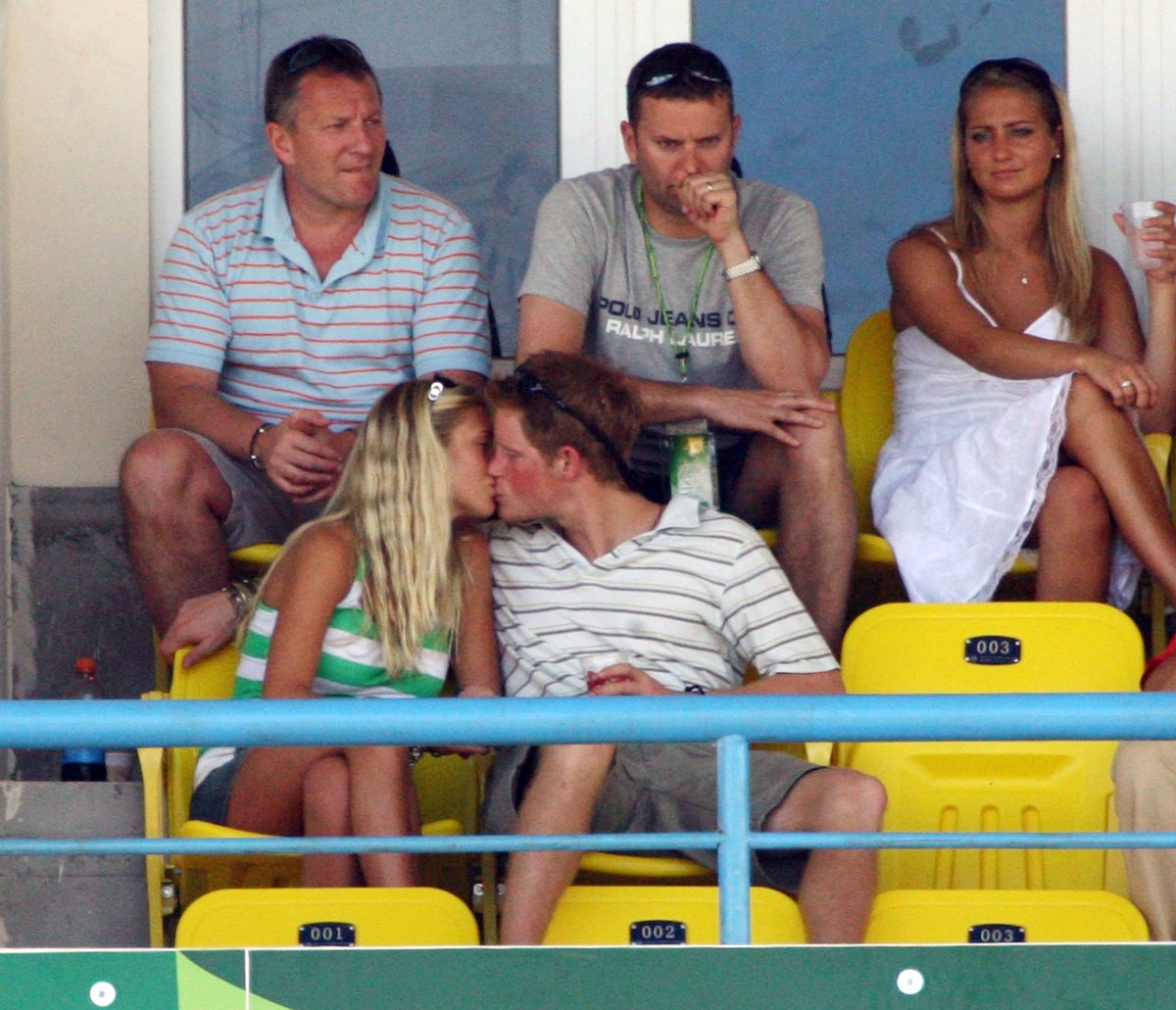 Prince Harry was no stranger to headlines about his 'public displays of affection' which strayed from royal protocol. Image: Getty/Shaun Botterill.

In 2014, Harry was asked by NBC what he would do if he wasn't a working royal and he immediately replied: "I'd probably live in Africa. I would probably be a safari guide, and at the same time, split my time with a charity."

He's always been pretty nonplussed by the 'royal' aspect of his life. Sure he loves that royalty affords him the ability to travel and work with charities of his choice, and start initiatives like the Invictus Games. But the pomp and ceremony? He's never appeared to love that.

In 2017, Harry told the Mail on Sunday his time in the army was "the best escape I've ever had." He considered giving up his title then and there so he could live a "normal" life as "just Harry".

But even though he admits he "wanted out" he ultimately decided "to stay in and work out a role for myself." 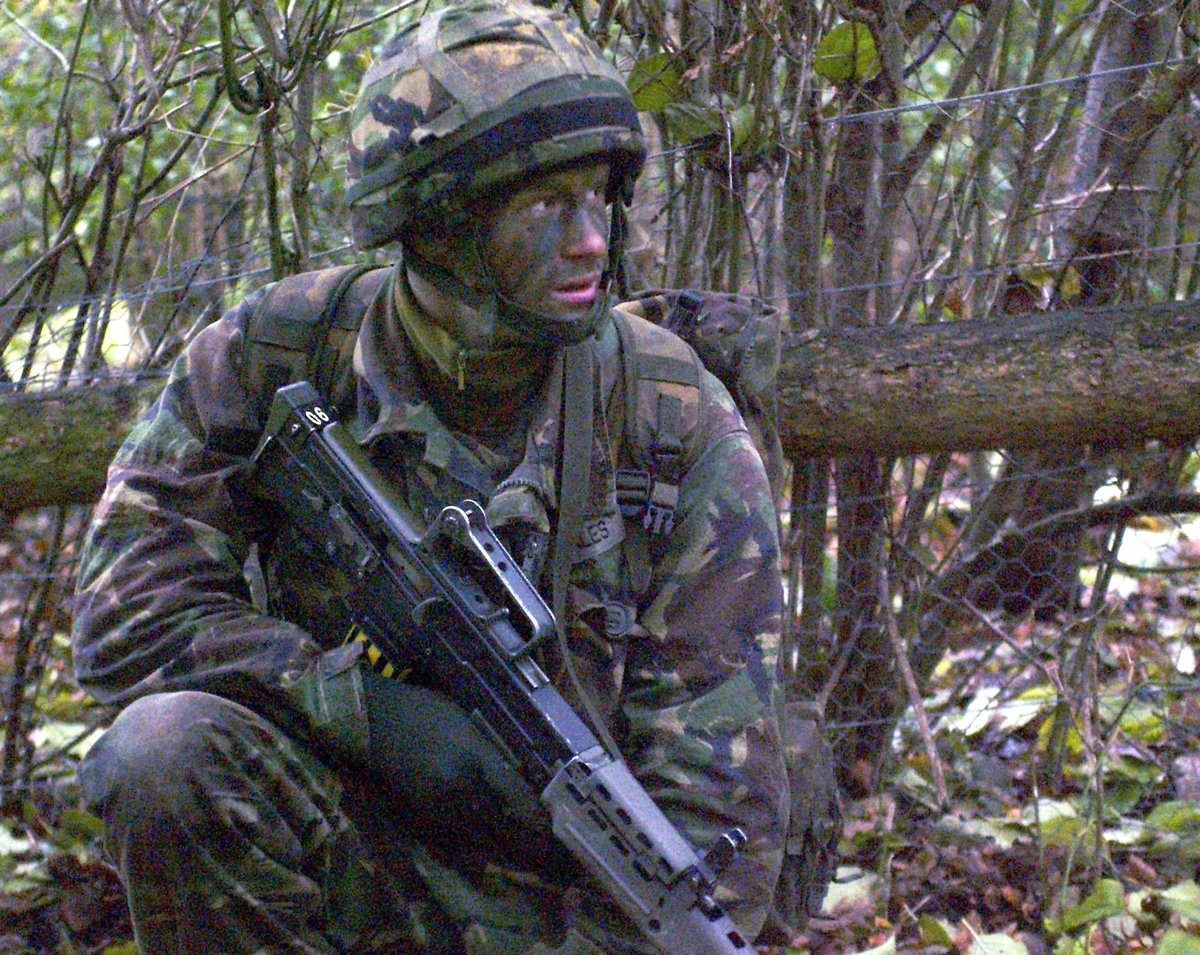 When his brother William and Kate welcomed their children, Prince Harry made no secret of the fact he was thrilled to move further down the line of succession. No doubt because it allowed him to put even more distance between himself and the rules of royalty.

Then Meghan Markle came into his life.

One month into their courtship in 2016, Harry made an unprecedented plea to the media to stop the "wave of abuse and harassment" against his new girlfriend.

But after their wedding in 2018, he watched the nastiness of the tabloids increase.

As soon as Meghan entered into the palace, the tabloids decided en masse that she was ‘difficult’. She was nicknamed 'Hurricane Meghan' and it was reported that she made Kate Middleton cry (we've since found out the opposite is true). She was called 'vain' and 'demanding' and accused of 'stealing' Harry from his family. Her pregnancy was torn apart on the front of magazines. She was holding her bump too much, carrying her son incorrectly, she was abandoning him to watch the tennis. It just didn't stop.

Harry watched his wife's life turn into the media circus his mother Diana's once was, and in a statement on the couple's website he wrote, "I lost my mother and now I watch my wife falling victim to the same powerful forces."

His worst fear was history repeating itself, and as we learnt in Oprah's interview on Monday night, Meghan was struggling with suicidal thoughts. Her life was at risk, and she was crumbling under the pressure, scrutiny and rules that came with being royal. 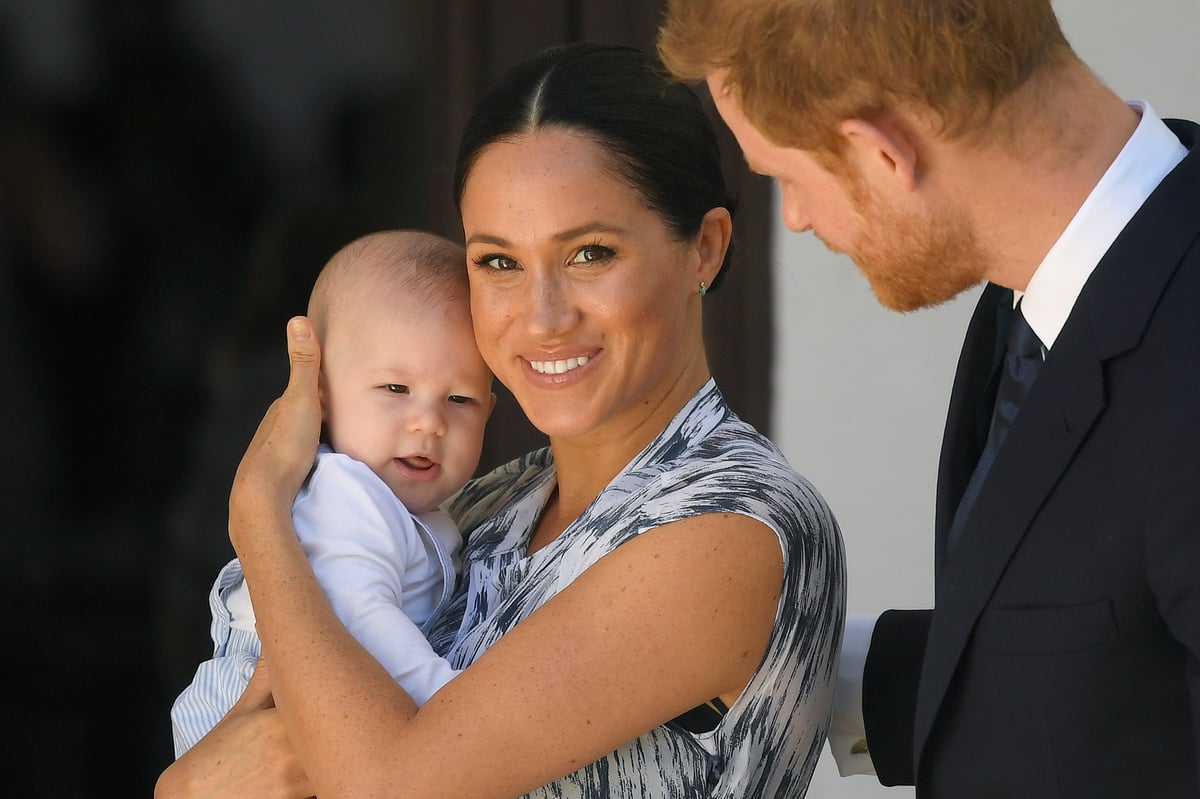 Harry has always had one foot out of the royal family, his wife and son just gave him reason to jump. Image: Getty.

And so Prince Harry and his wife Meghan decided to change history.

They left Britain, the monarchy and the tabloid scrutiny, and they carved their own path - a path Harry has hinted about wanting for years.

He just needed a big enough reason to leave.

Reply
Upvote
Nice gas lighting there (said in jest). They haven’t left the ‘tabloid scrutiny’ behind. They’ve been at the centre of a massive self –inflicted media frenzy for weeks. As long as free thinking people have eyes, ears and a brain; that narrative is going to be scoffed at.
R
rush a year ago

Reply
Upvote
16 upvotes
I don't think he was wrong to leave. Who wants to grow up and live your entire life as "the spare"? There's a lot of wealth and privilege, but it's a gilded cage, for sure. It's not the fact that he left,  it's the way it was done. There must have been a less combative way to do it. It's a shame really that he didn't leave when he was younger, and go to Africa or join the Army full time.
It will be interesting to see what happens with William and Kate's kids. Will the younger two be given the option to have a more private life, and choose their futures? I feel a bit sad for George. I saw a story somewhere a couple of years ago that said he was really excited by policemen, going through that stage I think a lot of little boys go through. But imagine being four years old, and having no idea that there's very little chance that you'll ever have the chance to join the police, or be a builder, or a zookeeper, because your life has already been mapped out for you.
News
General
Opinion
True Crime
Politics
Sport
Explainer
Entertainment
Celebrity
Reality TV
Movies
TV
Books
Rogue
Royal
Lifestyle
Beauty
Fashion
Weddings
Home
Wellness
Health
Fitness
Travel
Food
Parents
Before The Bump
Pregnancy
Baby
Kids
Teens
School
Parent Opinion
Work & Money
Money
Finance
Career
Lady Startup
Relationships
Sex
Dating
Separation
Friendship
Family
Real Life
Couples