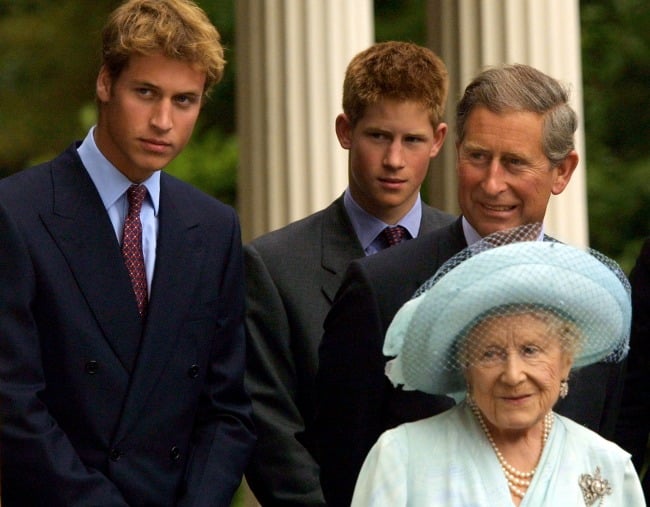 To keep up to date with the comings and goings of the royal family, check out our Royal Hub. It’s a blast.

When Queen Elizabeth, the Queen Mother, passed away in 2002, she left behind a very generous inheritance for her great-grandchildren.

However, the amount divided between brothers Prince William and Prince Harry, who were then aged 19 and 17 respectively, was not equal.

In 2002 the BBC reported the Queen Mother placed about £14m ($24.27 million AUD) into a trust fund for the young princes, with a majority of going to Prince Harry.

And there’s a very sensible reason behind the decision.

As the next in line for the throne after Prince Charles, Prince William is privy to financial benefits that aren’t available to his younger brother.

Growing up with Prince William and Prince Harry – the pictures that show it all. Nawwwwww.

For example, after Prince Charles ascends the throne, he’ll also pass on the Duchy of Cornwall to his eldest son. The Duchy was set up by King Edward III in 1337 and works like a private estate which funds the public, charitable and private needs of the eldest son of the reigning British monarch.

Currently Prince Charles has been in charge of the Duchy since 1952 and in 2017, the Belfast Telegraph said the Prince of Wales gets an annual income of over £20m ($34.66 millions AUD) a year from the estate.

Prince Harry on the other hand misses out on this.

When Princess Diana passed away in 1997, her will asked for the majority of her estate to be divided between the two princes and placed in a trust which they could access when they turned 30. According to Newsweek this figure sat at £10 million ($13.457 million AUD) each, but until then they had access to the investment income which comes in at around $605,000 AUD a year.

So one thing is clear – when it comes to the royals and money, it’s clearly not something the public needs to fret about.

Were you surprised at how much the royals actually earn? Tell us in a comment.