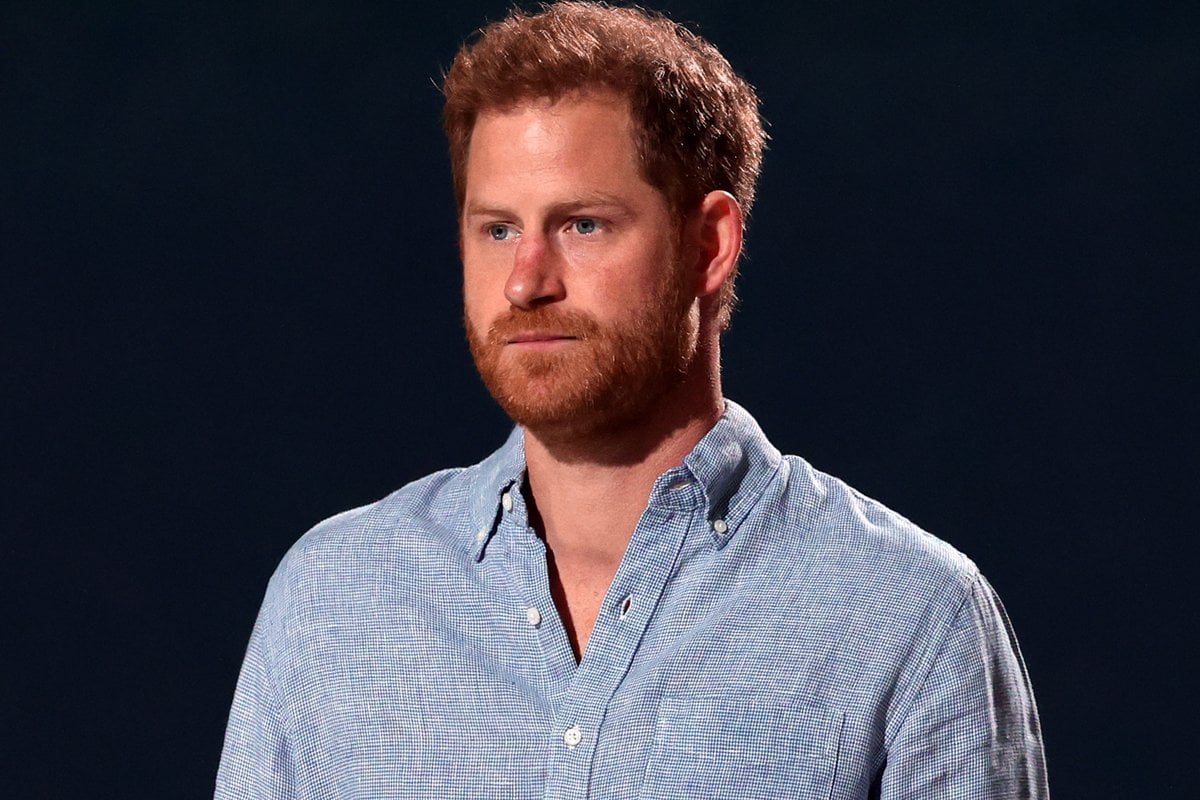 Remember to ask your mates: "R U OK?"

Tell them it's okay to not be okay. Grow a moustache.

Acknowledge the Black Dog. Man Up by speaking out. Do the #PushUpChallenge to help put the spotlight on the 3,318 Aussies who died by suicide in 2019.

October is Mental Health Month, and somewhere in there is Mental Health Day, and wear your mental health ribbon with your Beyond Blue hat while preaching that we have to eliminate the stigma and start having more of these conversations.

But then, when 36-year-old Prince Harry tells us there was a time he wasn't okay, we yell at him to "put a sock in it" before he's even finished his sentence. 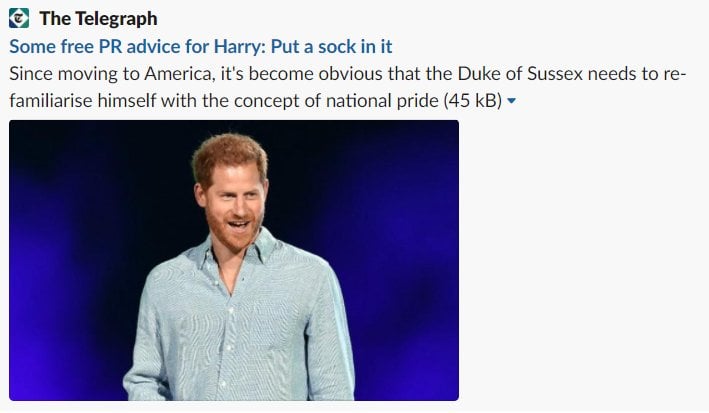 Image via The Telegraph UK.

Nevermind that suicide is the leading cause of death of men under the age of 45 in the UK.

Or that risk factors include a genetic disposition (we know his mother had periods of suicidal ideation), death or loss (the tragic and sudden death of his mother), loneliness (the privacy of the Royal Family is paramount) and conflict (his relationship with both his brother and father is strained) to name just a few.

It would be more shocking if Prince Harry hadn't suffered from some sort of mental health crisis.

This week, Prince Harry did two things that many seem to wish he didn't.

The first, is he appeared on Dax Shepard's blockbuster podcast Armchair Expert which literally has as its tagline: "Shepard interviews [people] about the messiness of being human."

Prince Harry, as was the brief, spoke candidly about feelings of helplessness and his experience with therapy. He referred to breaking the cycle of "genetic pain and suffering" and finding himself in his early 20s thinking, "I don't want this job. I don't want to be here, I don't want to be doing this, look what it did to my mum".

Listen to The Spill, where hosts Laura and Kee discuss the biggest moments from Prince Harry's interview. Post continues after podcast.

The second, is the release of the trailer for the upcoming docuseries The Me You Can't See, co-created and produced by Prince Harry and Oprah Winfrey.

Available on Apple TV+ from Friday, May 21, the series partnered with "14 accredited and respected experts and organisations from around the world to help shed light on different pathways to treatment" when it comes to mental health.

Prince Harry says in the trailer, "to make that decision to receive help is not a sign of weakness. In today's world more than ever, it's a sign of strength".

The response, at least in part, has been shameful.

Prince Harry has been branded - and I quote - as a "whiny crybaby". And as a man desperate to reconstruct his life "to be a victim" after having had "too much therapy".

He has been criticised for "saying too much", with commentators suggesting they're "losing sympathy and respect" for a man who is failing to "get the public on side".

Some have even remarked that "William lost his mum too" as though two siblings aren't allowed to have different responses to a shared trauma. That one might want to speak about it, and the other not so much.

So who, then, is allowed to speak about mental illness?

His wife certainly couldn't. When Meghan Markle brought up thoughts of self harm during their interview with Oprah Winfrey, she was dismissed as an attention seeking liar manipulating the public in an attempt to make the Royal Family look bad.

Such commentary ran alongside references to Lifeline and other mental health resources.

Speak out if you're struggling, is the message. But we can't promise we'll believe you becomes the fine print.

An earnest attempt to help has been co-opted by critics as an opportunity to hurt - and the irony is, it's not Meghan and Harry who will suffer the most. It's the tens of millions of people all over the world being told their mental illness makes them irritating. Bratty. And if they dare overcome it... well. A little preachy.

So it would seem that one of the world's most famous men, whose face has been printed in magazines since he was a day old, has grasped the microphone pointed in his direction with two hands.

If he has a platform, he might as well use it to talk about something he cares about.

He wants to live a happier, more free life than his father did.

He wants to treat people struggling with their mental health with dignity.

And he wants to embolden people to seek the treatment they need by telling them that he needed help, too.

For a former prince, who could be doing anything at all, surely there are less noble pursuits.

S
saumur a year ago

Reply
Upvote
2 upvotes
To a point it is helpful to use personal experience to raise awareness of mental health issues and to eradicate stigma. Harry and Meghan had their interview with Oprah with this in mind. Continual public ‘family bashing’ cannot be helpful to overcoming mental health issues.  Harry is now doing the same thing Meghan’s father and siblings did to her by public shaming her with interviews with the tabloid press - this  prevented any possibility of reconciliation with her father. Harry needs his family, however much he perceives their shortcomings, as it is clear he is loved by his royal family.
A
albury22 a year ago

Reply
Upvote
2 upvotes
Terrific article and if anyone questions the way Harry is going and want him to be silent then you have not understood the article and never will. He'll be using most of the money he gets into charity
M
mamamia-user-482898552 a year ago

Reply
Upvote
3 upvotes
@albury22 Please show objective evidence that "he'll be using most of the money he gets into charity". While you're at it, please check out how wealthy people use foundations to re-direct money and make obscene (but legal) personal profit.
I understood this article perfectly well. I simply don't agree with many of its sentiments.
G
guest2 a year ago

Reply
Upvote
1 upvotes
@albury22 Harry was at his best when he implemented the UK version of the Invictus Games.  It was selfless and showed a sense of altruism towards those who needed support and a sense of purpose.   It is a shame that he has become completely self absorbed and doesn't seem to realize he is being manipulated by American media companies for ratings.   Or, he is using those companies as a means to publicly humiliate members of the Royal Family in a quest for 'payback'.   As for the money going to charity, let's wait and see.
C
chrissyinthemiddle a year ago

Reply
Upvote
1 upvotes
@guest2 I fear his ongoing pain and anger is being used by clever people in order to make millions. Oprah made a great deal from that first interview. Dax Shepard’s podcast is moving Spotify. So including Harry created some great publicity for Spotify and would have fulfilled parts of that deal. The original interview with Oprah generated significant interest in the Apple TV docu-series that was already in the works. It’s the sensational claims, gossip and dirt on the royal family that people really tune in for and what generates the publicity and big pay check. I’m unsure if Harry is totally aware of what is going on or if his emotions are still so raw that he is unable to make a fully informed decision.
News
General
Opinion
True Crime
Politics
Sport
Explainer
Entertainment
Celebrity
Reality TV
Movies
TV
Books
Rogue
Royal
Lifestyle
Beauty
Fashion
Weddings
Home
Wellness
Health
Fitness
Travel
Food
Family
Before The Bump
Pregnancy
Baby
Kids
Teens
School
Parent Opinion
Work & Money
Money
Finance
Career
Lady Startup
Relationships
Sex
Dating
Separation
Friendship
Family
Real Life
Couples