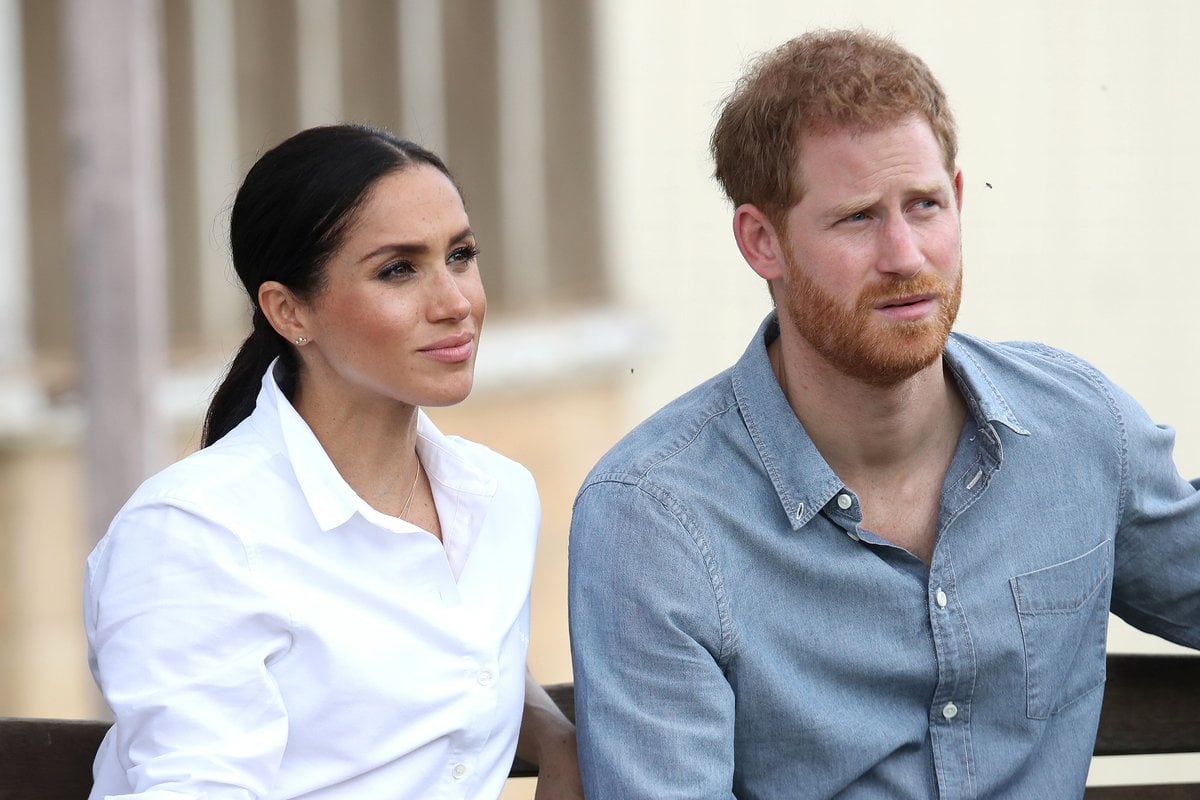 There's no need for formalities anymore. Honest. He's just 'Harry', and she's just 'Meghan'. New-ish parents, living a chill life in Santa Barbara, raising a kid a couple of dogs, and working on their podcast.

Where there were once eye-poking fascinators, pantyhose and stiff hemlines, now hang loose button-ups with rolled sleeves, even — look away now, Your Majesty — leather trousers and sandals.

Yes, a year on from their stunning resignation from the Royal family, the Duke and Duchess of Sussex are doing a thoroughly commendable impersonation of an ordinary Californian couple.

Watch: Before the royal resignation, Meghan, Duchess of Sussex, shared her struggles 'behind the scenes'.

On January 8, 2020, the pair announced they would be stepping down as senior Royals, knocking back their public paycheques and hoofing it across the Atlantic. The goal was to raise their then-8-month-old son, Archie, "with an appreciation for the royal tradition into which he was born, while also providing our family with the space to focus on the next chapter".

And that chapter reads well so far.

With 8700 kilometres between them and their former gig in the thousand-year-old family business, they've been free to pursue roles in an (arguably) healthier entertainment industry.

It started with signing on to a top talent agency for speaking engagements and founding a production company called Archewell Studios Inc.

Then in September came the multi-million dollar deal with Netflix "to develop scripted and unscripted series, film, documentaries, and children's programming". Oh, and another with Spotify’s Gimlet studio for their recently released podcast, At Home with Haz and Megs. Ok, ok, it's actually the much more disappointingly corporately titled Archewell Audio.

The first episode opened with, "Hi guys, I'm Harry," (Yes, sir. We know.) and featured guests including Elton John, James Corden, Stacey Abrams reflecting on 2020 and the power of compassion. 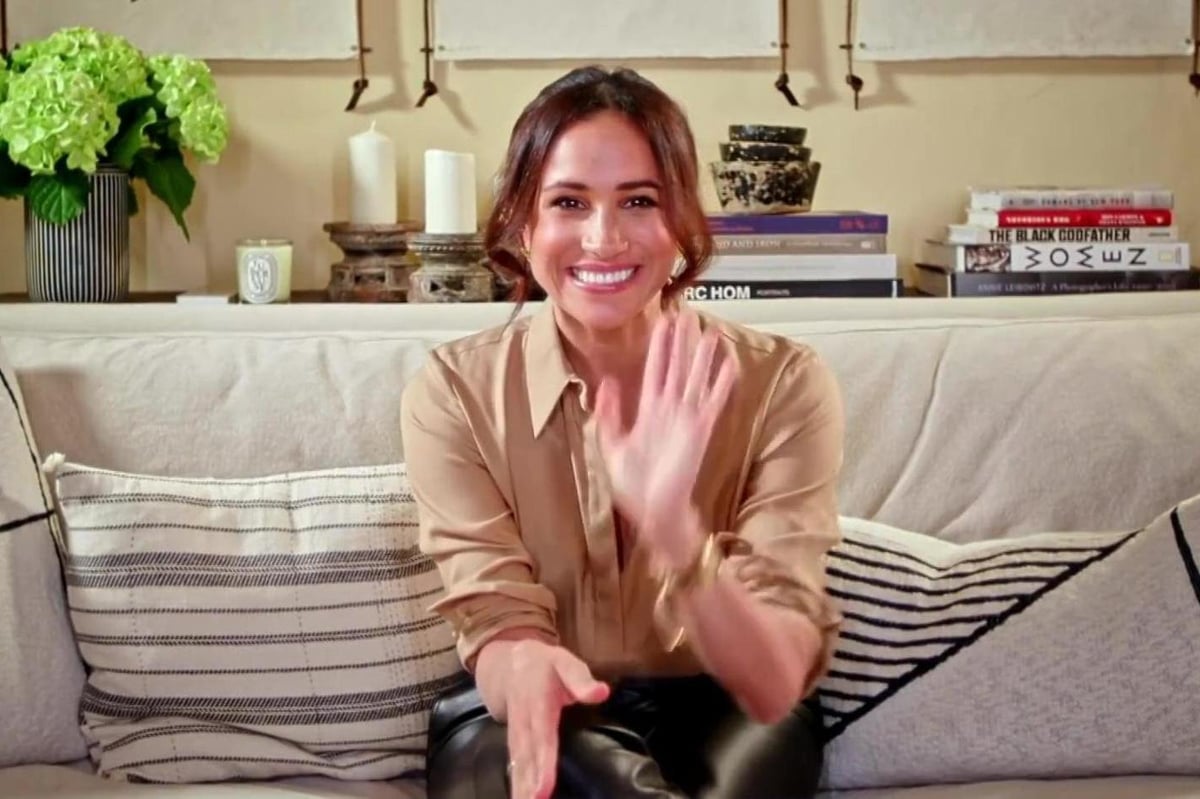 In fact, the biggest thing the couple has given to the glossies this year is a blown-out legal budget.

Both Harry and Meghan have filed lawsuits against British and American publications for alleged privacy breaches, including over unauthorised photographs of their little boy. Harry also recently reached a settlement in a suit over a Mail on Sunday article that accused him of snubbing his duty with the Royal Marines.

Meghan, meanwhile, is still engaged in a protracted fight with the same paper over its publication of a personal letter she sent to her father in 2018.

Could they be getting the message?

With the relative privacy she's achieved since her and Harry's self-imposed exile, Meghan has been able to wrestle back (at least some of) her profile and use it for advocacy. She narrated Disneynature's documentary Elephant in aid of conservation, spoke in support of the Black Lives Matter movement, and in November she generously shared her experience of a common but little-talked about trauma: pregnancy loss.

Listen: Meghan, Duchess of Sussex's decision to share her experience of miscarriage was all too familiar to Mia Freedman. Post continues below.

In an essay published by The New York Times, Meghan wrote that she endured a miscarriage in July while at home with Archie.

"Losing a child means carrying an almost unbearable grief, experienced by many but talked about by few," she wrote.

"Some have bravely shared their stories; they have opened the door, knowing that when one person speaks truth, it gives license for all of us to do the same. We have learned that when people ask how any of us are doing, and when they really listen to the answer, with an open heart and mind, the load of grief often becomes lighter — for all of us. In being invited to share our pain, together we take the first steps toward healing."

The piece - with its honesty, empathy and nuance - is arguably Meghan's greatest public legacy to date, one that a year earlier would almost certainly have had to pass through a fine Royal filter.

As for the next part of the chapter.... The monarchy is due to undertake a review of Harry and Meghan's departure arrangements in March.

Journalist Tom Bradby, who is a friend of the couple and toured Africa with them for their documentary Harry & Meghan: An African Journey, recently shed light on the Sussexes' happiness in light of their move to California.

“I think they are feeling better, yes … So are they unhappy? No, I think they are content, the things they are doing they are quite excited by,” Bradby said on ITV's Love Your Weekend, according to People.

“I think he is heartbroken by the situation with his family. You don’t necessarily need to have knowledge to know that, but I think it is true.”

Who knows what will happen after the Monarchy's review in March, but there is speculation they could lose more family privileges - or should that be responsibilities?

Reply
Upvote
2 upvotes
Nothing gets people more excited on this site than an opportunity to say how much they hate Meghan Markle.

Reply
Upvote
5 upvotes
@cat...And yet, nobody has said anything of the sort. You can be objectively critical about the actions of someone without "hating" them (or being racist, for that matter). And for the record, this is as much on Harry as it is his wife.

Reply
Upvote
1 upvotes
@mamamia-user-482898552 you’re right, no one said it directly. They just write paragraphs of criticism on every article about people they could literally just ignore while protesting that it’s ‘not racism’ with every second breath. It’s super convincing.

Reply
Upvote
3 upvotes
@cat Personally I respond to these articles due to the very uncritical, subjective way they are repeatedly reported - it seems there's an agenda being pushed to disseminate pro-H&M sentiment without any regard for balanced (or even accurate) coverage. Again, offering a different point of view to that of the article written is not automatically "racist" or "hating" in content or intent.

Reply
Upvote
1 upvotes
@mamamia-user-482898552 I don’t think Mamamia are involved in a secret conspiracy to push pro-Sussex material. They’re just covering what happens like they would with any other celebrity.

Reply
Upvote
1 upvotes
I find it interesting how you can really choose how to frame articles on any topic! I am using the universal "you" here not talking specifically about this author. This past week I saw what Harry and Meghan's website says and I laughed but it also made me gag "through our non-profit work within Archewell Foundation 501(c)(3), in addition to creative activations through the business verticals of audio and production." WHAT!? am I dense or is this a total pile of tosh!? Creative activations?!
I'm sorry but something really doesn't sit right with me asking for privacy and then moving to LA and appearing on podcasts and tv shows and SETTING UP photo opportunities with famous photographers to capture wreath laying. Do you want privacy or not? They don't want privacy they want to be incredibly famous they just want to control every little aspect of their image. Suing the newspaper/photographer in Canada when she was on a walk in a public park? With an infant strapped to her chest? I'm sorry but even any of us could be snapped in that situation. I'm aware we wouldn't be and that is a significant point.

Reply
Upvote
1 upvotes
@mamamia-user-556745246 But it's not like those images would have grossly interfered in Archie's life. The back of your infant baby's head is not that special and unique that a picture of you carrying him will ruin his future. Oh...and youve released audio and video of him anyway...
I also really dont like how they use the titles "Duke and Duchess of Sussex", I knoooow these will not be taken off them and they are allowed but for two people who want to be "financially independent" and "carve their own paths" they are 1000% capitalising on these names for their fame and profit. America dont have an actual royal family and there's no doubt this carries weight.
I live in London, over 1000 was yesterday's daily death toll. An average of 800 people a week have died of covid. Look I know the media can manipulate what we see and people can manipulate the media (especially the royals). I also know Harry and Meghan have devoted loads of energy to causes they care about. But in this past year... where over 70 000 people have died in the UK William and Kate have used that time having a real presence in the UK showing support for the people working hard. Harry has signed deals with Spotify and Netflix.
I often hear any criticism of these two dismissed as racist or because they (the critic) can't handle a strong woman. I really think that's tired and too easy to pull out. There are valid reasons why these two don't sit right with a lot of people. And as two people using Duke and Duchess in their names to make loads of money and remain relevant in the public eye, these criticisms are fair. Travelling in a private jet and then telling people to think about the environment, it's a valid thing to criticise!
If they'd moved to Canada and genuinely tried for a peaceful, "normal" upbringing for Archie then I would view media attention on them differently. But they really really really have not moved towards privacy they claimed they wanted. (Just a reminder she was pregnant here and made it through a whole pregnancy with barely any pics of her bump other than official engagements- if it's privacy they want they could get that)
Please please can Holly talk about them on Outloud again!? Actually Mia and Jessie too of course! I would love to hear a discussion on how they split opinion.
News
General
Opinion
True Crime
Politics
Sport
Explainer
Entertainment
Celebrity
Reality TV
Movies
TV
Books
Rogue
Royal
Lifestyle
Beauty
Fashion
Weddings
Home
Wellness
Health
Fitness
Travel
Food
Parents
Before The Bump
Pregnancy
Baby
Kids
Teens
School
Parent Opinion
Work & Money
Money
Finance
Career
Lady Startup
Relationships
Sex
Dating
Separation
Friendship
Family
Real Life
Couples