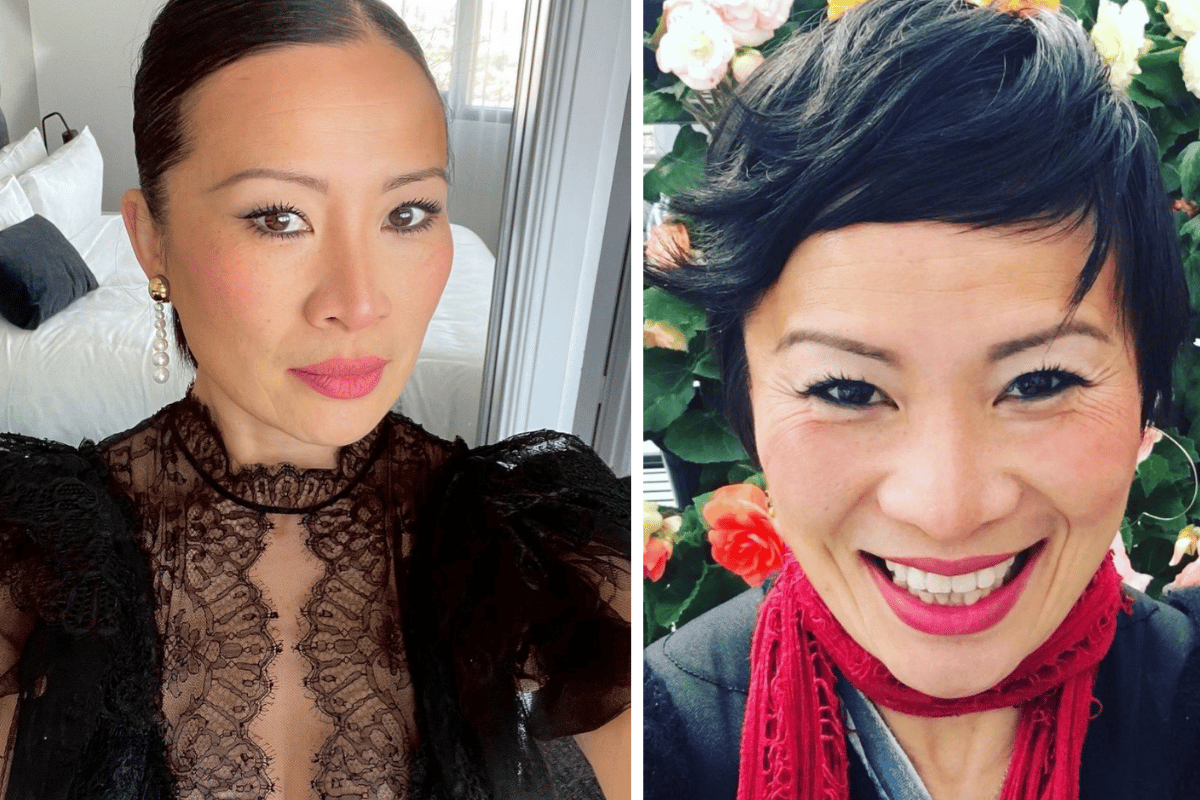 If you're a person with a television, then you know who Poh Ling Yeow is.

First rising to stardom on MasterChef Australia in 2009, Poh has graced our TV screens ever since with her effervescent personality, handy culinary skills and high-risk, stress-inducing cooking approach.

The 49-year-old has built a very successful career for herself, but it's her personal story that many aren't yet familiar with.

She was raised in the Mormon Church. She works with both of her ex-husbands, all of whom run a business together. She's a talented artist. And she is someone who can't be boxed in.

Here's everything we know about the one and only Poh.

Poh was born in Malaysia in 1973, spending the first nine years of her life in Kuala Lumpur. Her family then migrated to South Australia where she still lives and works today.

In Malaysia, everyone around Poh was also born with an additional Westernised name: Poh was Sharon, her mum was Christine and her father was Steven.

So when Poh arrived in Australia, she began writing on her school books 'Sharon Poh Ling Yeow'. She didn't go back to Poh until her 20s.

"I felt completely alien. I remember lining up at the tuck shop for lunch at school, and in front of me was this blonde girl with freckles and blue eyes eating a Sunny Boy ice block and thinking: I will never be that," Poh shared on ABC's One Plus One.

"I felt different, but I made myself feel that way: I didn't experience much racism, it was more self-imposed and I put the little cage around myself."

Poh Ling Yeow on being raised in the Mormon Church.

For Poh's family, it was a knock on the door that converted them. So in her early teens, Poh and her family began their journey into the Mormon Church.

"Mum and I converted first. For me personally, I really loved the ideals that were presented to me. I liked the idea of the wholesomeness of the environment," she said.

Sharing her story on I'm A Celebrity... Poh said: "My family was going through some hard times and it was just kind of what we needed."

Poh Ling Yeow talks about her experience living as a Mormon. #ImACelebrityAUhttps://t.co/VZNGPbEXJs

"There wasn't room for me to grow. In organised religion, there's no room for philosophical exploration and I started to find very quickly that I felt stifled."

But after travelling, it dawned on Poh that she wanted something different.

"Just that experience alone started to fracture everything that I had known. It threw everything apart. I also found a best friend, who was trans, and she opened my eyes to the world: everything became grey and not so black and white."

Poh said things between herself and her family, who are still part of the Mormon Church, became "very tense" after she decided to leave the church aged 24.

"That was probably one of the biggest things I've ever been through in my life. It caused quite a lot of family heartache." 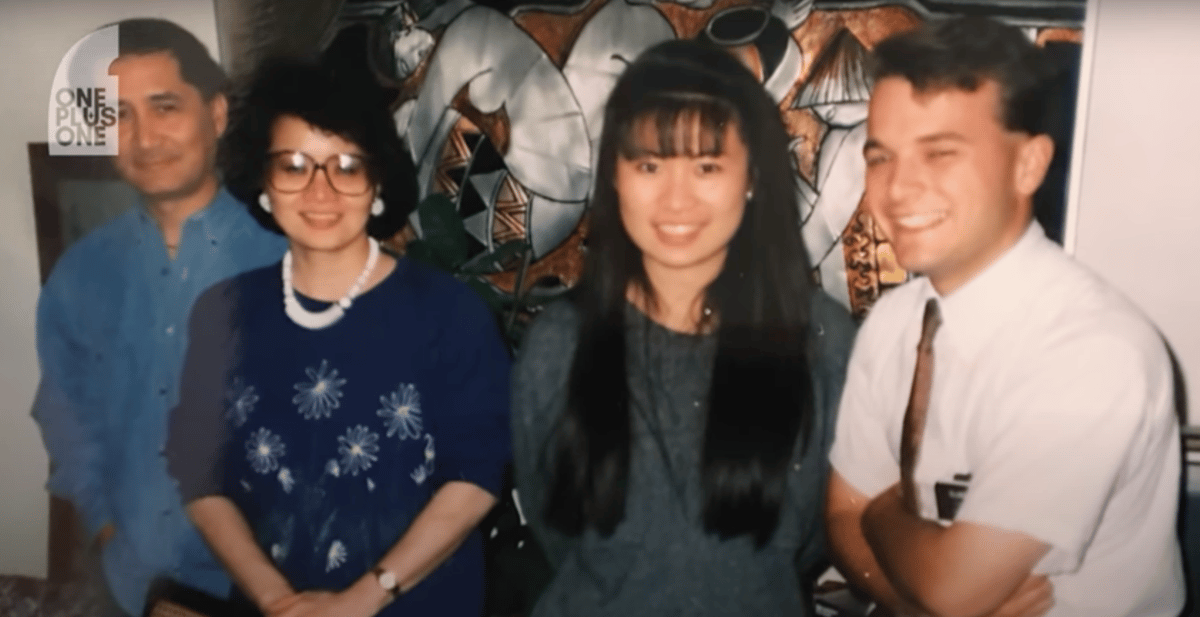 Poh and her family during her time with the Mormon Church. Image: One Plus One.  Poh Ling Yeow's experience on MasterChef Australia.

In 2009, Poh appeared on MasterChef Australia's first season, where she became a massive fan favourite and the runner-up.

Prior to the show, Poh wasn't someone who regularly cooked Asian food at home. It was only when she arrived on the set of MasterChef Australia that this fact became very apparent to Poh.

"I knew it worked to my advantage, to play to what I looked like: I was an easy character to identify in the sea of contestants who are grappling to get air time: 'okay, I'll be the Asian girl cooking Asian food'."

But from the experience, Poh says she was able to begin learning about her family's recipes and cultural dishes she had loved throughout her childhood. "Food was the one thing that I felt I had a connection to my culture. There's something about food that is very emotional and spiritual for me: those recipes have their own stories and travelled eons to get to me," she said on ABC's One Plus One.

Since the reality TV cooking show, Poh has been busy!

She's had a successful career as a chef in the years following, with her own cooking show Poh's Kitchen, series Poh & Co. and multiple cookbooks, televisions appearances and more.

Then in 2020, MasterChef die-hards rejoiced when it was announced the series was bringing back its fan favourites to compete against one another, aka the best of the best.

Speaking about the return, Poh said to Mamamia: "I've been waiting for this moment for ten years and now I'm back. I have a little bit of unfinished business."

Unfortunately for fans (and Poh), she was eliminated from the competition over some burnt butter and an under-cooked pasta in the show's final weeks.

Other than cooking up a storm, Poh's other great passion in life is art.

After completing a Bachelor of Design specialising in illustration at the University of South Australia, Poh used to freelance as a graphic designer and illustrator, before becoming a full-time painter: something she has maintained since 2002.

Speaking with ABC's One Plus One, Poh noted that her artwork often explores ideas of belonging and origin, often featuring Chinese iconography and in particular the image of a young Chinese girl.

Speaking about that recurring image, Poh said: "Painting her over and over again has been really cathartic. I grew up with that whole cliche of not liking how I looked because I didn't fit in. When you are fed a certain image in the media growing up, it's really hard to ignore that, when you're not that. I personally didn't experience much racism when I came here, a lot of my feelings were self-imposed."

Poh Ling Yeow's relationships and working with her two ex-husbands.

Poh married her first husband Matt Phipps in 1990, the pair both practicing Mormons at the time. After nine years together, Poh and Matt amicably divorced.

Following their divorce, Matt went on to marry Poh's best friend of two decades, Sarah Rich. For Poh, the whole experience was not as complicated or upsetting as others may perceive.

"He's my ex-husband. She's my best friend. And when we broke up, they got together, and it's all dandy. It's actually really good. Everyone tries to complicate it for us. From the outside in, they're all like, 'love triangle!' He's like my brother now," she said to Mamamia in 2017.

In 2009, while filming for the first season of MasterChef Australia, Poh met her second husband, Jonathan Bennett.

He was the driver responsible for transporting the contestants between the cooking studio and their accommodation. Initially, the pair didn't talk much as they were contractually obliged not to "fraternise with staff" to ensure the show's secrets were kept until it went to air.

"It got a little more charged because we weren't allowed to talk to each other. It was like the school playground: cute looks across the yard sort of thing. Then, after the show, we hooked up. We exchanged numbers straight away, and it was all guns after that," she said to Mamamia.

After Poh and Jonathan got married in 2014, the couple went into business with her ex-husband Matt and his wife Sarah. They continue to run food business Jamface all together.

"We've come full circle. It's quite funny sometimes [because] people don't know our history. I'll lose my shit at Matt in an 'ex-wife' sort of way and people are like 'whoa, you really gave it to him,' and I'm like 'yeah, we used to be married,' and they're like 'oh, right, that explains a lot'."

But last year, after more than 12 years together and six years married, Poh announced she and Jono were separated.

"It's been the most untraumatic breakup possible and I'm single again after 12 years," she said to The Weekend Australian at the time.

"I'm enjoying negotiating life on my own, enjoying the feeling of being a lone ranger: I've been in serious relationships for 24 of my 47 years."

She continued: "Jono and I still work together and are the best of friends. I work with husbands number one and two. Jamface is a catalogue of failed marriages! Life is stranger than fiction."

Poh has started 2022 with a bang, one of the first contestants to enter I'm A Celebrity... Get Me Out Of Here!

Whether she was able to make rice and beans taste fancy is a whole different story.

The MasterChef Australia star was coming in at second place in bets to win I'm A Celebrity... but has now dropped to fourth. While she is sitting a little lower on the pole, she is still a favourite in the eyes of social media.

We have our fingers crossed that Poh can become queen of the jungle!