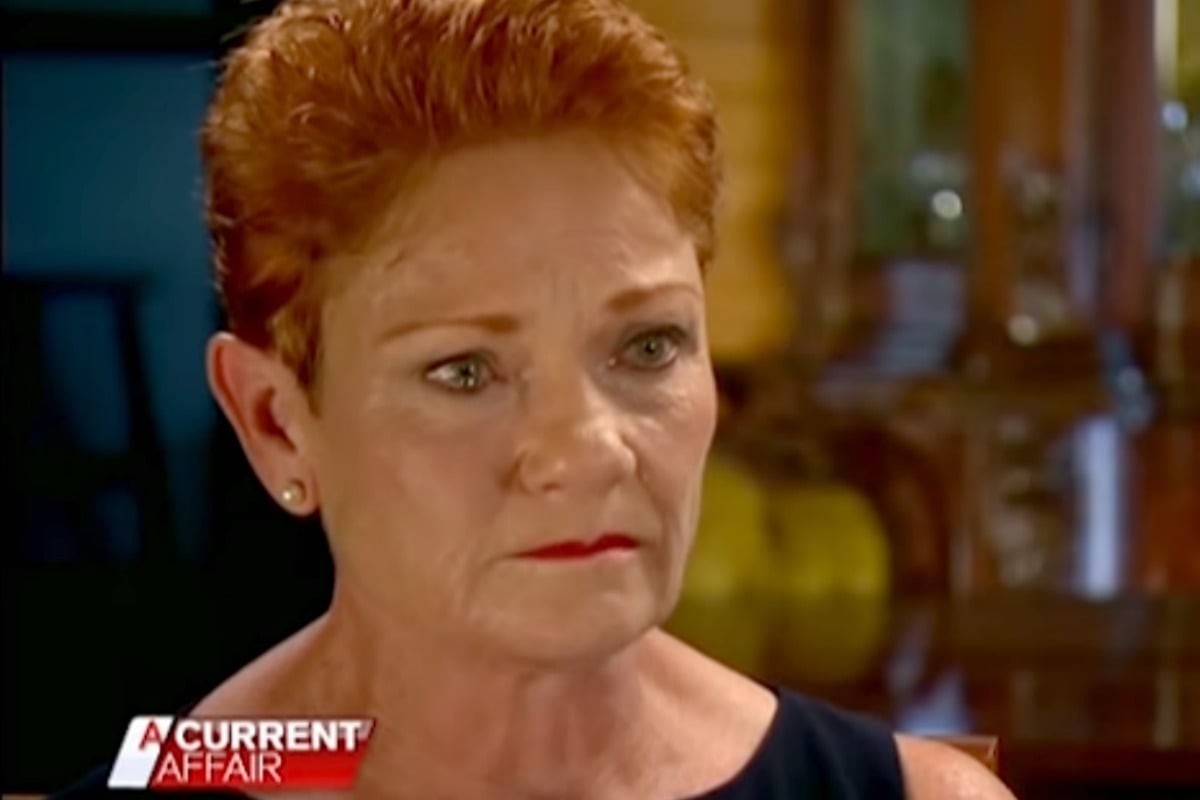 Last night, Australia saw a different side to Pauline Hanson.

The One Nation leader gave an emotional interview to A Current Affair, crying as she spoke about the disastrous few weeks for her party, which saw the resignation of two election candidates and the party nose dive in the polls.

“I cop all this shit all the time and I’m sick of it, absolutely sick of it,” the 64-year-old said as she broke down in tears.

Mamamia’s daily news podcast The Quicky spoke to a competitive intelligence research consultant whose job it is to find the dirt on politicians… because in the game of politics, you win or you die. Post continues below audio.

She lamented the actions of past One Nation candidates: Fraser Anning, Brian Burston, David Oldfield – and now Steve Dickson and Ross Macdonald.

Hanson has made her name on a divisive brand of politics. She and her party members position themselves as the ones who “say what you’re thinking”, using inflammatory language and breeding hatred of ‘others’.

One Nation’s divisive policies have time and time again attracted candidates that are ticking time bombs.

And it is Hanson that selects them.

There have been many victims of Hanson and One Nation's politics - but she is not one of them.

In her maiden speech to Parliament in 1996, Hanson said Australia was "in danger of being swamped by Asians".

A year later, One Nation distributed a flyer with a photo of Hanson draped in the Australian flag. On it, the flyer said her party wanted to "abolish divisive and discriminatory policies, such as those related to Aboriginal and Multicultural affairs".

It also listed repealing the Native Titles Act, which recognises the traditional rights and interests to land and waters of Aboriginal and Torres Strait Islander people, as an immediate goal.

In 2006 - while considering a political comeback - Hanson said she was concerned by the ease in which 'diseased' Africans were able to come to Australia.

"They are of no benefit to this country whatsoever; they'll never be able to work," she said.

Almost exactly 20 years after her maiden speech, and after more than a decade out of Parliament, Hanson made another speech in 2016 attacking a minority group.

"We are in danger of being swamped by Muslims who bear a culture and ideology that is incompatible with our own," she told the Senate.

"Islam cannot have a significant presence in Australia if we are to live in an open, secular and cohesive society... We have seen the destruction it is causing around the world."

After the brutal death of a British backpacker in Queensland in 2016, Hanson was quick to politicise the incident claiming the murder "could well be the first Islamic terrorist attack in Queensland and I want some answers". Police ruled out any links to extremism.

Perhaps her most infamous of actions came in 2017, when she wore a burqa in Parliament to underscore a call she intended to make to ban the religious garment, citing national security concerns.

Last year, she declared 'anti-white racism' was on the rise and unsuccessfully moved a motion in federal parliament saying "It's OK to be white".

In the footage, the National Rifle Association and One Nation discussed how exploiting women's fears through the promotion of needing guns for self-defence would be a great first step to dismantle gun laws.

Then just this week, damning footage of Dickson in a US strip club was leaked to A Current Affair.

"Kevin Rudd, he goes to a strip club, you've got Craig Thomson who used the credit card of the unions in a brothel, you've had corruption, you've had Eddie Obeid… you've had everything but they just sail through it," Hanson said in her A Current Affair interview.

"No, let's give Pauline Hanson a kick in the guts."

What Hanson fails to acknowledge is the many ongoing 'kicks in the guts' she and her party have been giving minorities in Australia for decades.

what do you mean a different side to her ?
everytime her or one of her team get caught out doing something bad she goes all victim, woe is me, crocodile tears.
pathetic