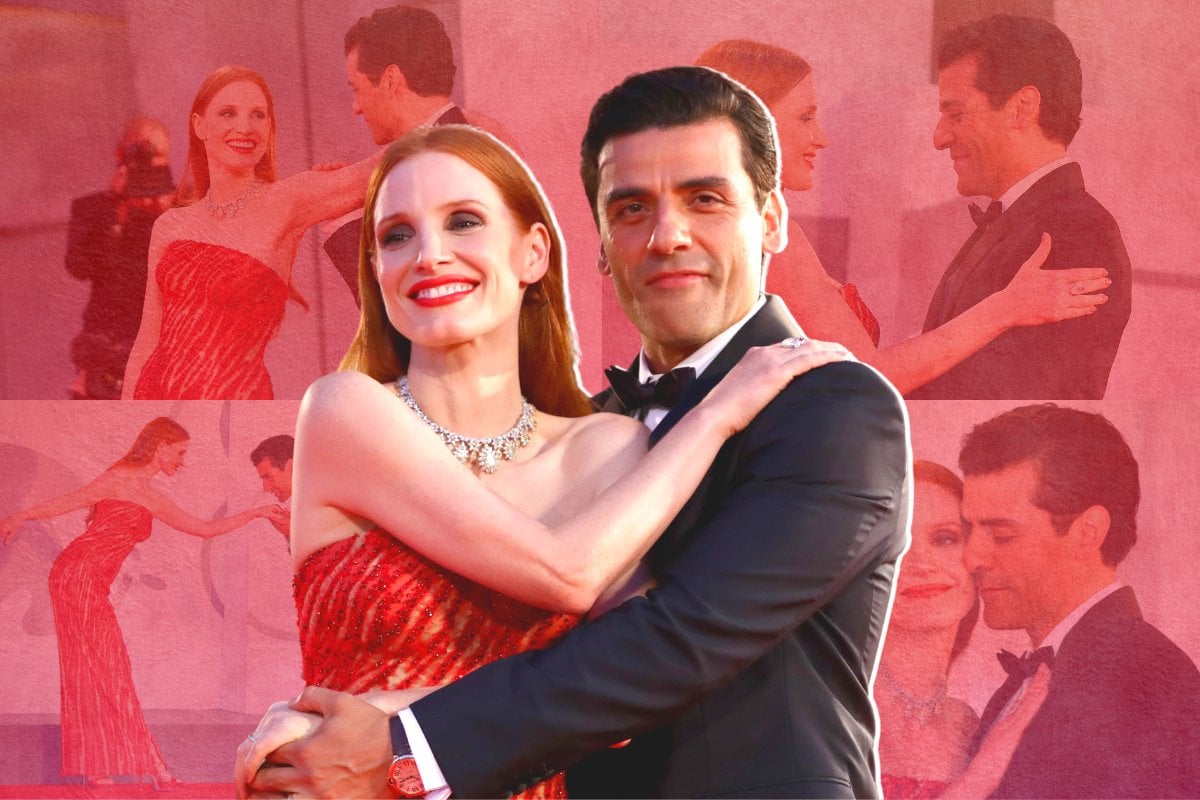 A slow motion, silent video covered in a giant watermark doesn't sound like much to get excited about.

But when that video features Oscar Isaac, Jessica Chastain, the most intense eye-contact we've ever seen, and we're all been starved of human contact for a year and a half, weird things happen.

Isaac, 42, and Chastain, 44, are co-stars in the upcoming Foxtel miniseries Scenes From a Marriage, a remake of the 1973 miniseries of the same name.

Watch: The trailer for Scenes From a Marriage. Post continues below video.

The five-episode series made its world premiere at the 78th Venice International Film Festival over the weekend, which obviously saw the two stars walk the red carpet.

It was a fairly normal red carpet event, until film critic Christina Newland uploaded a video of the pair interacting to Twitter.

In the video, Chastain puts her arm around Isaac's shoulder. He looks at her... with a look that simply cannot be described with words, strokes her arm and leans into it.

They both laugh, she cups his face, he looks to the sky and pretends to pray.

I wish I had words for this but I really do not pic.twitter.com/xJVzOJJCeh

It's a lot and it unsurprisingly had the internet in shambles.

Star Wars and Dune star Isaac has been an 'internet boyfriend' for a long time, but this video took things to a whole new level.

The reactions, memes and... thirst came in thick and fast.

the way oscar isaac looks at jessica chastain i would simply faint
pic.twitter.com/IVqhrL6rPN

I do NOT have the capacity for that Oscar Isaac clip right now. Please

someone who is good at productivity please help me time manage this. my family is dying

she’s okay. she’s a little shaky but it’s good to just let her sleep. things have been really hard for her ever since she saw the oscar isaac video

After months of isolation and distancing, and a Hollywood landscape severely lacking romantic stories, the video struck a nerve.

Further inspection of photos from the moment at another angle seems to point to a joke between the two in which Isaac pretended Chastain smelled as she put her arm around him, so it probably wasn't meant to look as hot as it did.

It also explains his screwed-up face and the way she jokingly pulled away from him afterwards, but look. The horse had bolted.

The whole exchange had already been deemed irreversibly hot. 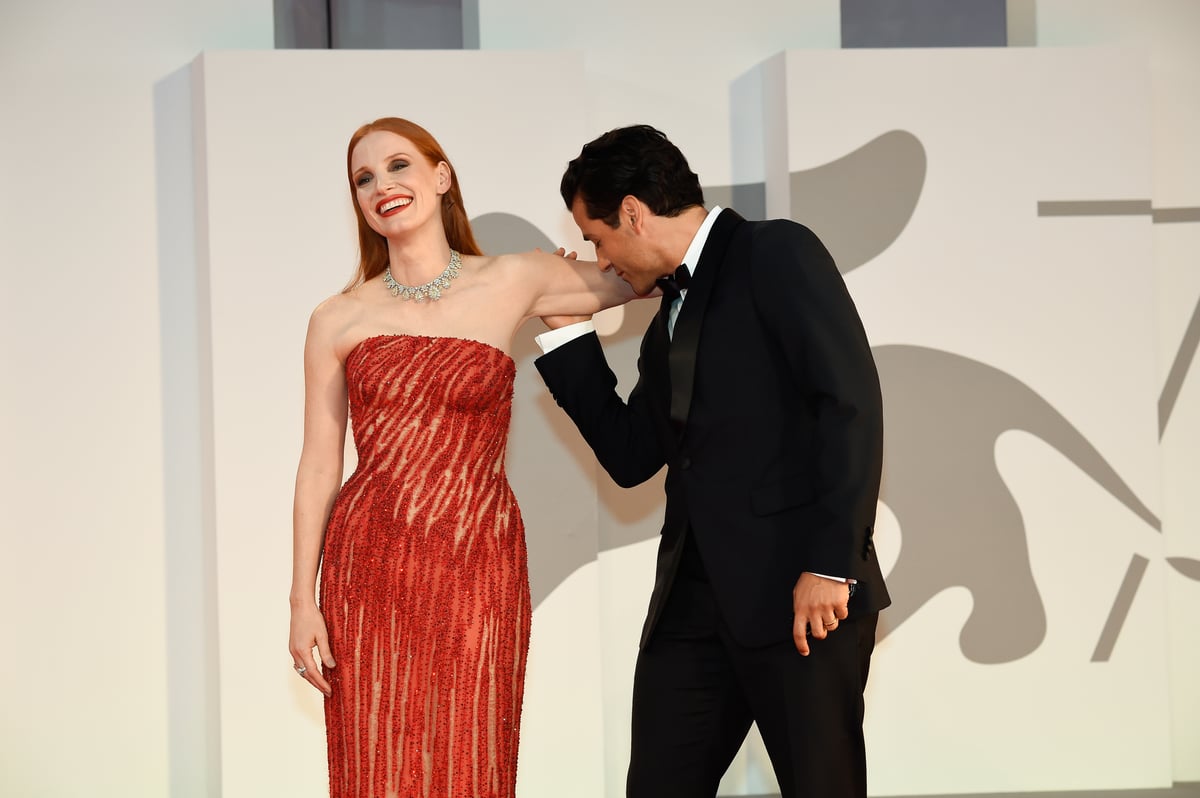 Definitely looks like a sniff. And is definitely still hot. Image: Getty.

The conversation then turned to Isaac and Chastain's real-life relationship and jokes about the reactions of their spouses, but this requires some context:

Isaac and Chastain are long-time pals. They attended Julliard together, and have been close friends ever since. They starred as a married couple in 2014's A Most Violent Year, and will once again play husband and wife in Scenes from a Marriage.

Which we are all definitely going to watch now.

The closeness of the pair is why most of us find the arm sniff so sexy in this instance. They're close, they're joking around and clearly having a good time.

They're also both married to other people: Chastain to Italian count Gian Luca Passi de Preposulo, who is an executive for fashion brand Moncler. Isaac married Danish film director Elvira Lind in 2012. She was in attendance in Venice, laughing just out of shot while he and Chastain walked the red carpet.

Oscar Isaac's wife (Elvira Lind) was with him when he was being touchy with Jessica Chastain! 😭😂😂 Elvira is an alpha, straight up. pic.twitter.com/lsJJCDr5Ki

She walked the Venice carpet with her husband for his movie The Card Counter a day earlier, and has been documenting their time in the Italian city on Instagram.

So as much as this conversation is about Isaac and Chastain's chemistry, we're not suggesting it's anything other than two mates playing for the cameras and (really successfully) promoting their new show.

They are both actors after all.

Remember how badly we got played by Bradley Cooper and Lady Gaga during their promo blitz for A Star Is Born?

Everyone convinced Oscar Isaac/Jessica Chastain must have something going on just shows we need to bring back romcoms and chemistry test. Stars used to be compatible and put on shows while doing promo!

If anything, the reaction to the Isaac and Chastain video indicates two things:

1. Hollywood has starved us of on-screen romance and sexual tension in recent years and,

2. It needs to start casting Oscar Isaac as the lead in all love stories going forward.

Sincerely, everyone on the internet.

Scenes From a Marriage will stream on Foxtel Now from September 13, 2021.

N
no pufferfish 10 months ago