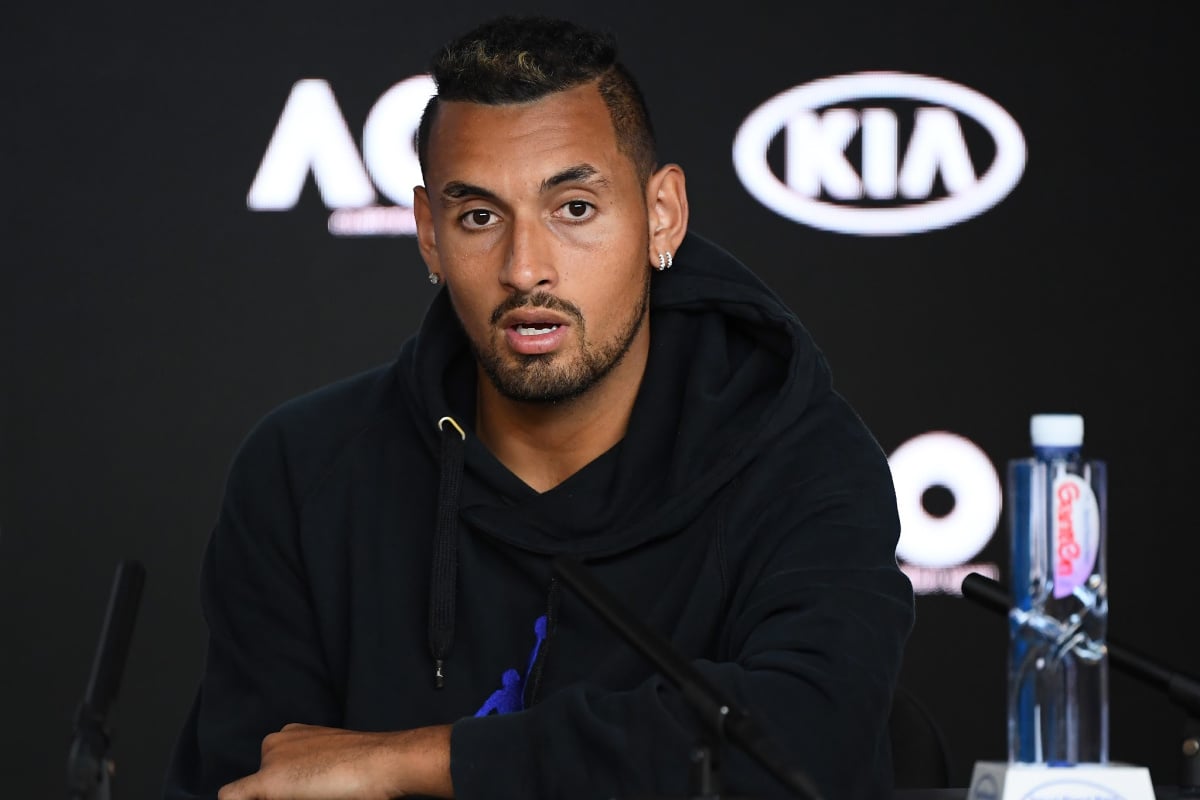 Nick Kyrgios appears to have burnt his Davis Cup bridges by having a second dig at Australian captain Lleyton Hewitt.

Kyrgios declined to back Bernard Tomic’s criticism of the tennis great during a press conference on Tuesday. But then he decided social media was a better place to make his feelings known.

Kyrgios posted a poll to his followers, asking whose match Hewitt was watching.

He provided two options: “Demon” and “No one else”. (Demon is Alex de Minaur’s nickname.)

Kyrgios removed the post not long after it appeared but it added weight to Tomic's comments that there was a rift in the Davis Cup camp.

After losing to Croatian Marin Čilić on Monday, Tomic chose to talk instead about Hewitt and the Davis Cup.

“No one likes him anymore,” he told the media.

“Kokkinakis, Kyrgios, we don’t want to play anymore because he’s ruined it [the Davis Cup]. He’s ruined the system. Like, go away. I thought he’d retired, like, why are you still in tennis? Why do you still play all these doubles tournaments?” Tomic said in regard to Hewitt playing in last year’s Davis Cup tournament.

In his post-match press conference a day later, after losing to Canadian Milos Raonic, Kyrgios wouldn't be drawn into commenting on the feud.

When asked his thoughts on Tomic’s comments, Kyrgios replied: “I didn’t see them.”

He said he would make himself available for the Davis Cup – which was at odds with Tomic’s comments.

Kyrgios said there was “not really” a rift between him and Hewitt and that he “didn’t know what to say” in response to Tomic.

He went on to say the focus on Tomic’s comments was “sad”.

The third player mentioned, meanwhile,  Thanasi Kokkinakis would not say whether he supported Hewitt as Davis Cup captain after his first-round retirement against Japan's Taro Daniel.

"I”m not answering that," he said during his press conference.

Earlier this month on Twitter he was asked why Hewitt didn't watch he or Kokkinakis play during the Brisbane International.

"He has what some call abandon us (sic),'' Kyrgios responded in a tweet he later deleted and claimed he was joking.

Now Australia's fourth-ranked player, regardless of the comments, Kyrgios is unlikely to be needed for Australia's Davis Cup qualifier next month against Bosnia and Herzegovina in Adelaide.

And it doesn't look good for all those hoping he'd had an attitude adjustment when it came to receiving criticism.

On air, Healy slammed Kyrgios, along with Kokkinakis and Tomic, for their "appalling" footwork, also criticising him for not having what is known as a chip return in his repertoire.

You blokes all have zero idea. It’s comical people like yourself have an opinion of us. You blokes are anything but athletes, so how about you concentrate on your own shit. Zero credibility. https://t.co/ZMKZX5vIXu

On Twitter, Kyrgios commented, "You blokes all have zero idea."

"It’s comical people like yourself have an opinion of us."

"You blokes are anything but athletes so how about you concentrate on your own s**t."

He later added, "Like please explain to me the similarities between AFL and tennis. Shut your mouth."

To Rasheed, he said: "You should be ashamed mate."

Another woman was attacked and killed, her body was found in shurbs in Bundoora (north of Melbourne city) yesterday morning, found by window washers, right beside a child care centre. She is reportedly a 21yo Israeli international (student possibly). Yet yesterday and today no mention of it on here. And this tennis spat between two wealthy sportsmen is your big head story? Disgrace.