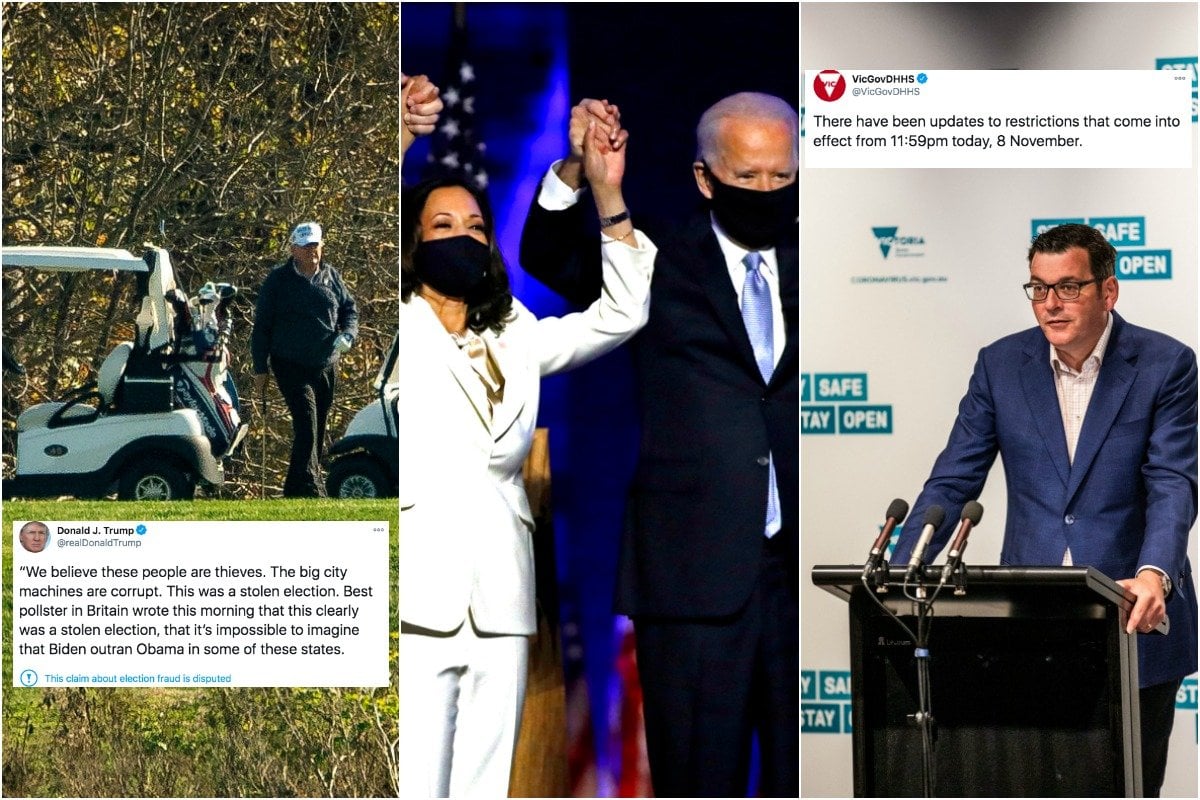 Trump refusing to concede, while spending a second day on the golf course.

Outgoing American president Donald Trump has returned to the golf course for a second day, continuing his refusal to concede the US presidency.

He has continued to condemn the electoral process and the media's 'role' in the day on Twitter with unfounded claims like: "We believe these people are thieves. The big city machines are corrupt. This was a stolen election. Best pollster in Britain wrote this morning that this clearly was a stolen election, that it’s impossible to imagine that Biden outran Obama in some of these states."

“We should look at the votes. We’re just beginning the tabulation stage. We should look at these allegations. We’re seeing a number of affidavits that there has been voter fraud. We have a history in this country of election problems. In Pennsylvania you had an order by a...

His most recent tweet attacks the media: "Since when does the Lamestream Media call who our next president will be? We have all learned a lot in the last two weeks!"

Melania Trump has also joined in her husband's calls for a "fair election," writing;

"The American people deserve fair elections. Every legal - not illegal - vote should be counted. We must protect our democracy with complete transparency."

The American people deserve fair elections. Every legal - not illegal - vote should be counted. We must protect our democracy with complete transparency.

9News is reporting that it's likely Trump will never formally concede - which is a formality, not a necessity - but will grudgingly vacate the White House in January.

He has filed a number of lawsuits in key states, in an attempt to find 'voter fraud.' But sources familiar with the actions have told ABC News that there has been internal bickering over the suits with some members of the president's legal team feeling they are "pointless" and "meritless."

It has been confirmed that once Joe Biden takes office, Donald Trump will face the same Twitter rules as any other social media users, which means rule-breaking tweets will be deleted instead of flagged with "public interest" notices.

Most of the president's tweets in recent days have a fact check box attached.

In other White House news, Trump’s chief of staff Mark Meadows has reportedly been diagnosed with COVID-19, since the election. He last appeared in public early Wednesday morning without a mask.

Mark Meadows, the White House chief of staff, has contracted the coronavirus, as have five other White House aides and a Trump campaign adviser, officials say, raising fears of another outbreak sweeping through the ranks of the nation’s top officials https://t.co/SM9lCzICq1

This is the time to heal in America: Biden.

In a moving acceptance speech Sunday afternoon AEST, US President-elect Joe Biden declared that it is "time to heal" America, declaring: "the people of this nation have spoken. They have delivered us a clear victory, a convincing victory."

Biden's victory in the battleground state of Pennsylvania put him over the threshold of 270 Electoral College votes he needed to clinch the presidency, ending four days of nail-biting suspense and sending his supporters into the streets of major cities in celebration.

Cheers and applause were also heard around Washington, with people emerging onto balconies, honking car horns and banging pots. The wave of noise in the nation's capital built as more people learned of the news. Some sobbed. Music began to play, "We are the Champions" blared. 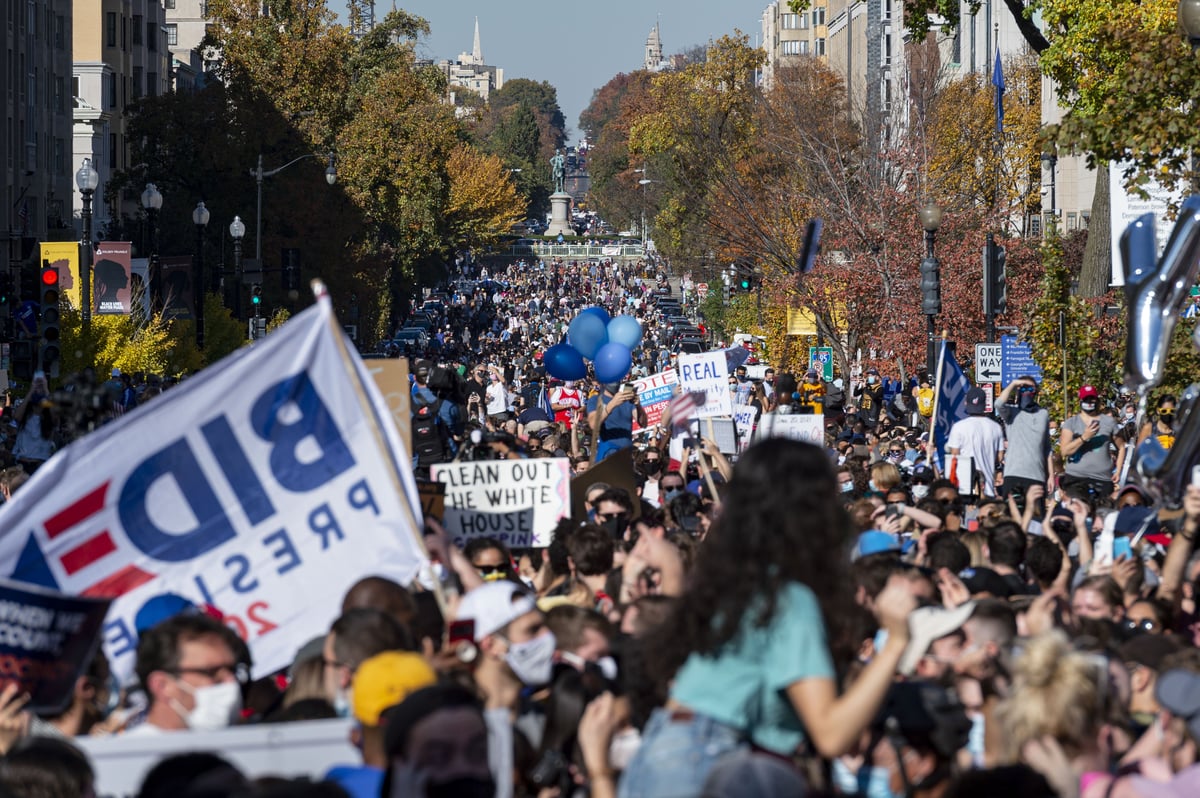 Angry pro-Trump "Stop the Steal" demonstrators gathered at state capital buildings in Michigan, Pennsylvania, and Arizona. Protesters in Phoenix chanted "We want audits!" One speaker told the crowd: "We will win in court!"

Biden addressed Trump's supporters directly in his speech, telling them; "I pledge to be a president who seeks not to divide, but to unify."

Watch: “I pledge to be a President who seeks not to divide, but to unify; who doesn’t see red states or blue states, only sees the United States.” Joe Biden delivers a speech to the nation for the first time as President-elect https://t.co/LELgRDmToc pic.twitter.com/AZI0aQwucq

He was introduced by his running mate, US Senator Kamala Harris, who will be the first woman, the first Black American and the first American of Asian descent to serve as vice president, the country's No. 2 office.

"What a testament it is to Joe's character that he had the audacity to break one of the most substantial barriers that exists in our country, and select a woman as his vice president," Harris said.

Vice President-elect Kamala Harris, in her speech on Saturday night, acknowledged “all the women who have worked to secure and protect the right to vote for over a century.”https://t.co/NPpjX9I56P pic.twitter.com/cvCc75u6wQ

FOR MORE: 'We will restore the soul of America.' Kamala Harris and Joe Biden deliver their victory speech.

Congratulations to @joebiden and @kamalaharris - Australia wishes you every success in office. The Australia-US Alliance is deep and enduring, and built on shared values. I look forward to working with you closely as we face the world’s many challenges together.

Congratulations President-elect @JoeBiden & @KamalaHarris on your victory in the US Presidential election. With so many issues facing the international community, your message of unity is one we share. New Zealand looks forward to working with you both! https://t.co/VTGRM4mHEK

Congratulations, @JoeBiden and @KamalaHarris. Our two countries are close friends, partners, and allies. We share a relationship that’s unique on the world stage. I’m really looking forward to working together and building on that with you both.

There were no signs of the violence or turmoil many had feared, and the pro-Trump protests mostly faded as the results sunk in.

Victoria is finally whole again, tearing down the so-called "ring of steel" dividing Melbourne from the regions.

Regional areas had been off-limits to Melburnians for months as the city lagged behind in its second wave fight with COVID-19.

Fresh from nine consecutive days without a new case, Premier Daniel Andrews confirmed the border would be thrown open from 11.59pm on Sunday.

There have been updates to restrictions that come into effect from 11:59pm today, 8 November.

"We know that so many people have missed those that they love the most, those who they need to see, been desperately keen to see, for such a long period of time," he told reporters.

Hospitality venues can now also host up to 70 patrons outdoors and 40 indoors, while a maximum of 20 people will be allowed in gyms, libraries, community centres, galleries, museums and cinemas.

Aged care residents are able to have visitors from one household per day for two hours, and partners can visit maternity wards indefinitely.

Looking ahead, Mr Andrews flagged statewide rules would next ease on November 22.

Global coronavirus infections have exceeded 50 million with a second wave of the virus in the past 30 days accounting for a quarter of the total.

According to the latest tally from Reuters, October was the worst month for the pandemic so far, with the United States becoming the first country to report more than 100,000 daily cases.

A surge in Europe contributed to the rise.

The latest seven-day average shows global daily infections are rising by more than 540,000.

More than 1.25 million people have died from the respiratory disease that emerged in China late last year.

The pandemic's recent acceleration has been ferocious. It took 32 days for the number of cases to rise from 30 million to 40 million. It took just 21 days to add another 10 million.

Europe, with about 12 million cases, is the worst-affected region, overtaking Latin America. Europe accounts for 24% of COVID-19 deaths.

The United States, with about 20% of global cases, is facing its worst surge, recording more than 100,000 daily coronavirus cases on the latest seven-day average, Reuters data showed. It reported a record of more than 130,000 cases on Saturday.

The latest U.S. surge coincided with the last month of election campaigning in which President Donald Trump minimised the severity of the pandemic and his successful challenger, Joe Biden, urged a more science-based approach.

The Australian War Memorial is set to commemorate Remembrance Day with a nationally televised ceremony.

The event will be held at the Memorial in Canberra from 10.45am to midday on Wednesday, broadcast live on TV and streamed online.

Memorial director Matt Anderson PSM encouraged people to take the time to reflect on the day.

In these unusual times, I was very pleased to lead a pre-recorded #RemembranceDay service at the Australian War Memorial.

The national Remembrance Day ceremony will retain traditional elements such as one minute's silence at 11am, the laying of wreaths by invited dignitaries, the sounding of the Last Post, and a commemorative address by Corporal Daniel Keighran VC.

The Memorial will remain closed on Wednesday morning and will reopen at the conclusion of the national ceremony.

The Last Post ceremony will take place at 4.55pm and be streamed online.

The Memorial will host an evening opening of the Commemorative Area from 5.30pm until 7pm.

- Two-way travel between Australia and New Zealand is “very close”, foreign affairs officials say, as a further 10 "green flights" from across the ditch prepare to arrive before November 10.

- Alex Trebek, the beloved host of game show Jeopardy! has died of pancreatic cancer at the age of 80.

Reply
Upvote
Looks like the image I had in my head of Trump being hog-tied and physically carried from the White House by a bunch of Secret Service agents might actually become reality! 😆 Does the outgoing President usually speak at the inauguration? Can't wait to see that!
G
guest2 2 years ago