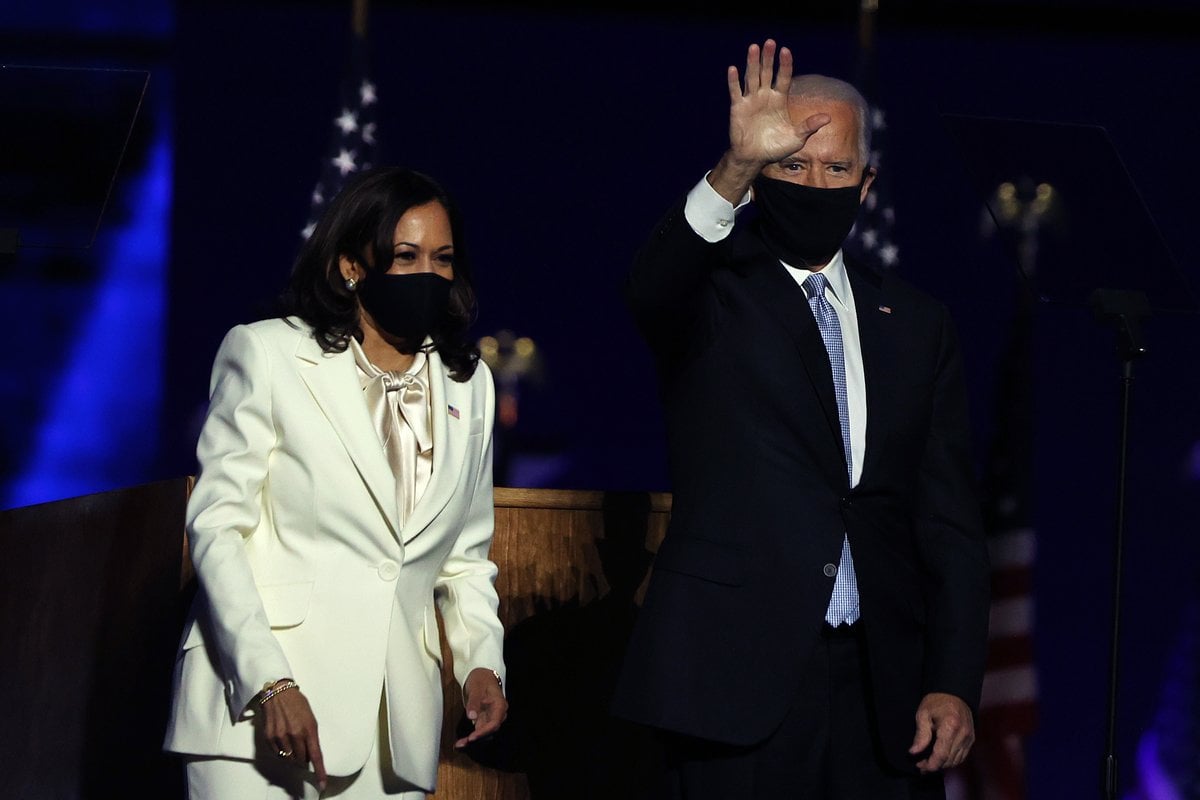 From Wilmington, Delaware, Joe Biden and Kamala Harris have delivered their victory speech after their historic win in the 2020 US Presidential election, defeating Donald Trump.

At least 74 million Americans voted for the Biden and Harris ticket, giving them the most votes ever cast for a US Presidential candidate.

On Saturday night, local time, Harris spoke first, thanking Americans for turning out in record numbers to ensure their voices were heard.

"You chose hope and unity, decency, science and, yes, truth," Harris said. The Vice-President-elect will be the first woman, the first Black American and the first American of Asian descent to serve as vice president, the country's No. 2 in office. 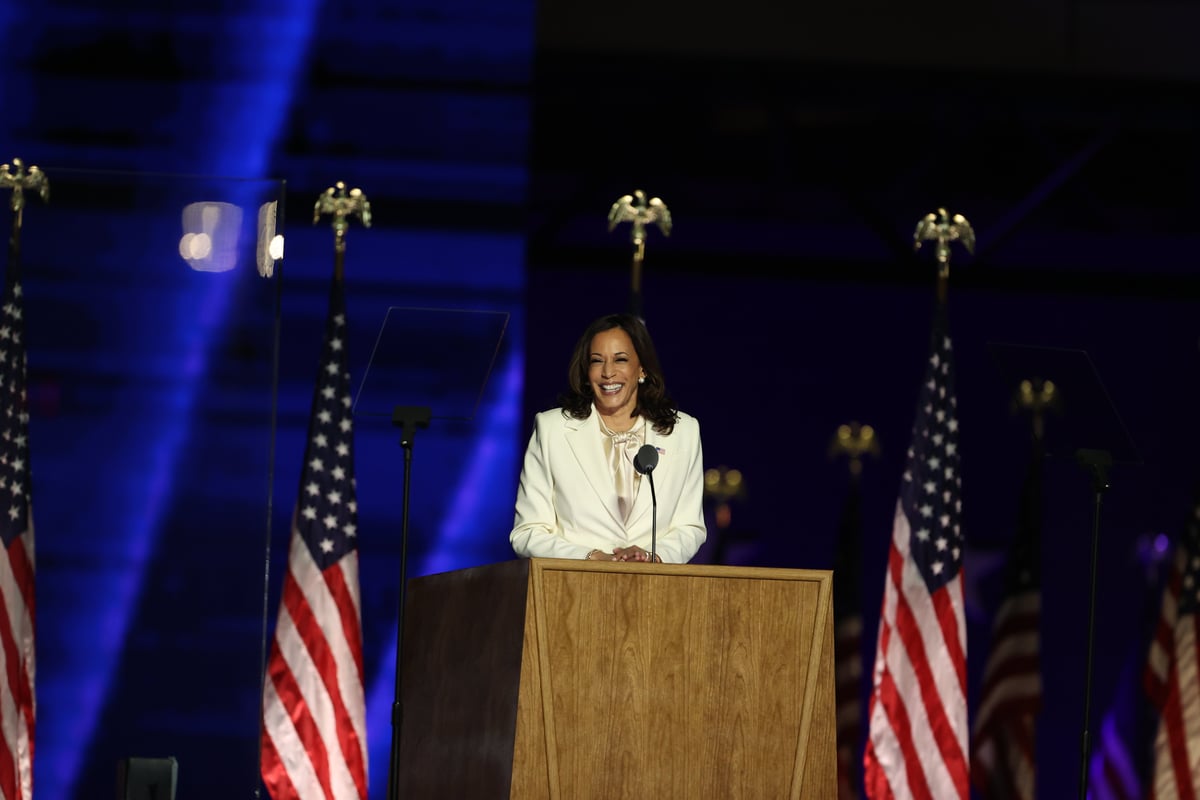 Vice President-elect Kamala Harris addresses the nation from the Chase Center November 07, 2020 in Wilmington, Delaware. Image: Getty.  Harris acknowledged the gravity of her historical moment, telling the crowd: "While I may be the first woman in this office, I will not be the last.

"Every little girl watching tonight sees that this is a country of possibilities," Harris continued. "And to the children of our country, regardless of your gender, our country has sent you a clear message. Dream with ambition. Lead with conviction. And see yourselves in a way that others may not, simply because they have never seen it before. But know that we will applaud you every step of the way."

Watch: Kamala Harris on becoming the first woman to be elected vice-president of America. Post continues below.

Kamala Harris then introduced President-elect Joe Biden, who ran on to the stage to a cheering crowd of thousands of people.

"Folks, the people of this nation have spoken," Joe Biden began. "They have delivered us a clear victory. A convincing victory.

"I pledge to be a president who seeks not to divide but unify. Who does not see red states and blue states, only sees the United States."

Biden promised all Americans to work to "restore the soul of America".

Acknowledging his opponent, President Donald Trump, Biden spoke to those who voted against him.

"For all of those who voted for President Trump, I understand the disappointments tonight. I have lost a couple of times myself. But now, let's give each other a chance.

"It's time to put away the harsh rhetoric, lower the temperature, see each other again, listen to each other again and to make progress, we have to stop treating our opponents as our enemies."

In terms of what he hopes to do as President, Joe Biden said he would fight to control the COVID-19 pandemic, to achieve racial justice, and to "save our planet by getting the climate under control".

Biden continued: "We will lead by the example not only of our power but by the power of our example." 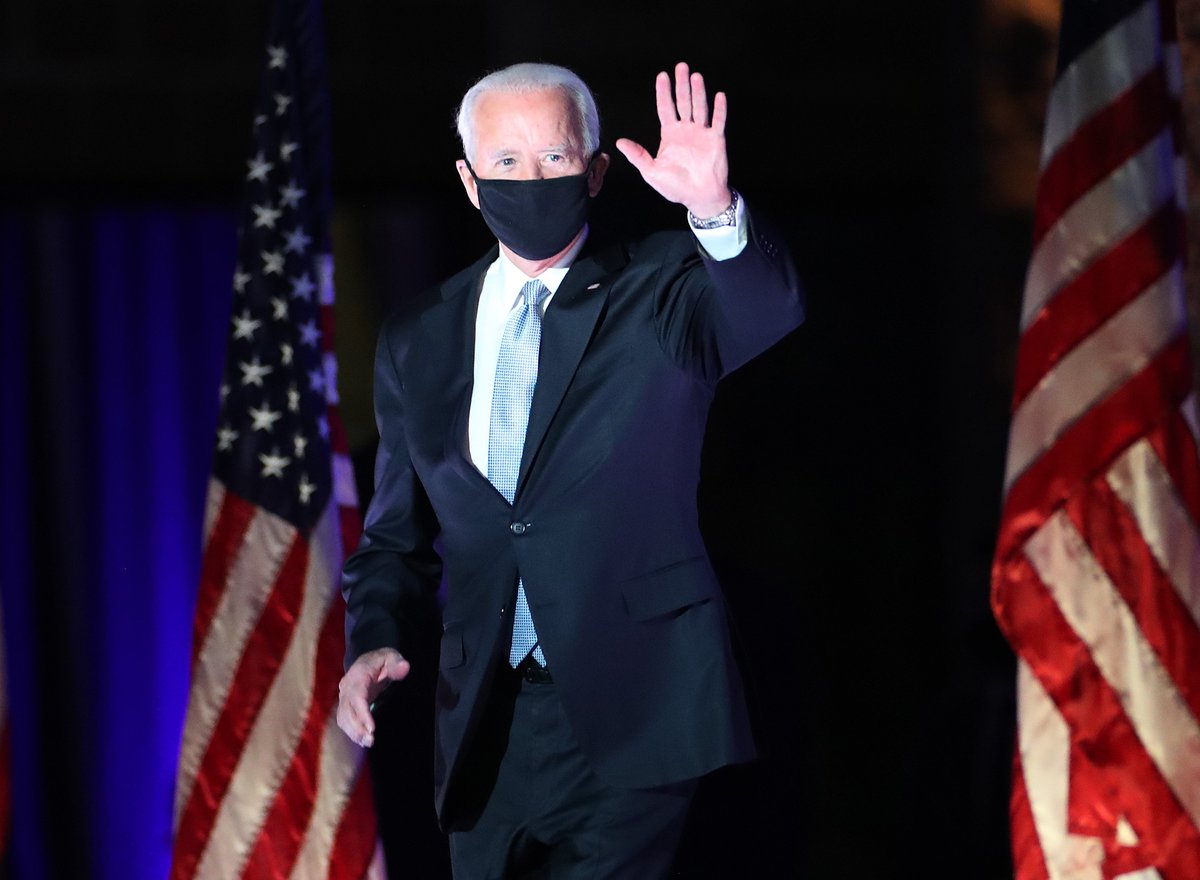 President-elect Joe Biden takes stage at the Chase Center to address to the nation November 07, 2020 in Wilmington, Delaware. Image: Getty.

Biden and Harris were then joined by their respective families on stage, including the future First Lady of America, Jill Biden, and their granddaughters.

The 2021 United States presidential inauguration will be held on January 20, when Biden will be sworn in as the 46th President of the United States of America.