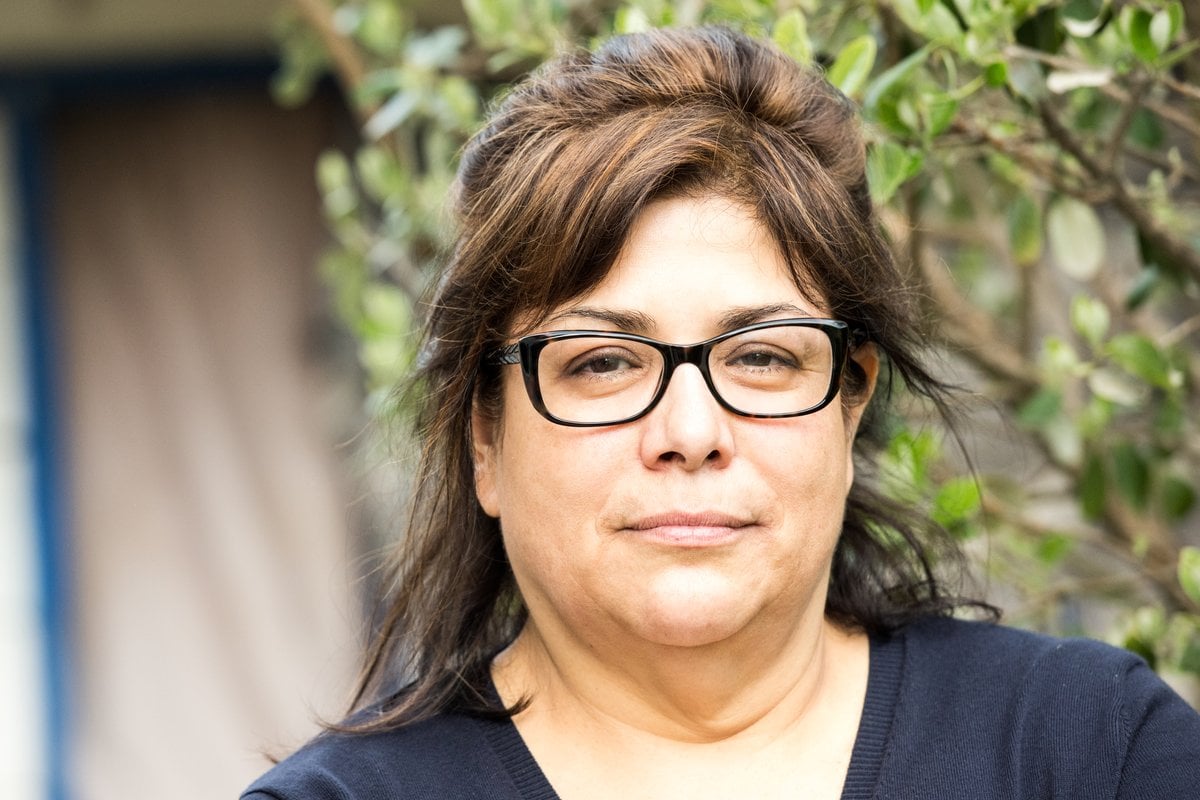 Tammy was only 36 when she entered menopause after needing a full hysterectomy.

When it happened, Tammy felt alone and out of place.

"All of the menopause pamphlets feature women in their late 50s. No one looked like me. I couldn’t identify with anyone," she told Mamamia.

Eight in 100 enter menopause early because of a hysterectomy or chemotherapy, like Tammy.

Another five per cent of women enter early menopause between 40 to 45. And in Australia, with 12.8 million women, trans- or non-binary people with ovaries, that means thousands of us will hit menopause before age 45.

Menopause affects your fertility, health, and mental health, and can be a difficult time.

That’s why everyone with ovaries, and those who care about us, in our 20s and 30s need to know about it too.

Side note: The Very Peri Summit, presented by Mamamia, is coming soon. It’s an online event with everything you need to know to navigate perimenopause, the super fun (sometimes) decade long phase before menopause. It’s streaming over two evenings and is available to catch up on demand anytime.  Get your tickets to make sure you don’t miss out when help finally arrives!

Here are some of the basics you need to know:

When you’ve had no periods for 12 months, that’s considered menopause. But it doesn’t start there!

Perimenopause, the transition time just before, can happen between two to 10 years earlier.

That means you could experience symptoms sooner than you expect.

For some women, perimenopause is barely noticeable. You might skip a period every now and then, or notice changes in your cycle. But for some, perimenopause comes with several tough symptoms.

Lily hit perimenopause around 39. At first, her libido increased as her hormones changed, and she felt great, but then things swung in the opposite direction.

"After the high came the low, and then the lower, and then an ever lower low until I felt like I had completely lost my sense of self and my place in the world. It is a difficult thing to explain, but an impossible feeling to live with."

2. It can be misdiagnosed because doctors don’t have the right training.

Common menopause-related mood symptoms, like depression and anxiety, are often prescribed antidepressants when it could be more useful to prescribe hormone replacement therapy.

Of course, antidepressants can be useful if you’re clinically depressed. But they don’t work so well for hormone-related depression according to Dr Lousie Newson: "Many women who start HRT and have been incorrectly given antidepressants in the past, find that their depressive symptoms improve on the right dose and type of HRT, to the extent that they can reduce and often stop taking their antidepressants."

Lifestyle changes, like diet and exercise, also make a big difference, she says.

If we understand our bodies and hormones better, we can be our own advocates.

For the majority of women, HRT is safe according to Newson, and other experts, such as endocrinologist Stella Milsom, agree with her.

Body identical hormones in the right combination replace the missing hormones or top them up during perimenopause.

Hormone therapy also isn’t a one-size-fits-all deal. Vagina estrogen, for example, is useful for some women and safer than Viagra, says Newson.

And of course, HRT deals with the difficult symptoms of perimenopause and menopause, which for some women is life-changing.

It’s important to look at evidence-based, accurate information and not be scared off by old ideas around HRT.

"For a symptomatic woman who is under the age of 60, within 10 years of menopause, and whose quality of life is being affected, you should be discussing hormone replacement therapy," Stella Milsom shared in Don’t Sweat It by Nicky Pellegrino.

While you're here, listen to Mia's message about perimenopause. Post continues after podcast.

Our grandmothers talked about hot flushes, but there’s so much more to it than that. The list of peri- and menopause symptoms is long!

Some women even feel like they’re getting early dementia.

The mood symptoms are often the worst, and at the extreme end can lead to suicidal thoughts, giving up work, and losing relationships.

Around a quarter of women will experience very difficult symptoms during peri- and menopause.

But you don’t have to put up with it.

5. You can still get pregnant.

Even if your periods have stopped for quite a while, it’s less likely, but still possible to get pregnant right up until you are postmenopausal.

During perimenopause, when your cycle is all over the place, it can be really hard to tell if it’s peri- or pregnancy. The hormonal fluctuations of peri- can be confusing too and feel very similar to pregnancy.

So if you’re not wanting to get pregnant, it’s important to keep practising birth control until you’re 100 per cent sure you’re post-menopausal.

And if you want to get pregnant, head to a fertility clinic — there’s still a chance.

If you think you might be experiencing symptoms of peri- or menopause and want to do something about them, there is a questionnaire online at Balance that you can take to your specialist or GP.

Ask, could this be what it is? And be your own advocate. The more information you have, the better you’ll be able to manage your own health through this time and get the help you need.

"If you’re willing to take responsibility for your own health, post-menopause can be more fulfilling than you might imagine. Younger women tend to understand the importance of self-care now and that gives them a big advantage." - Cindy, age 64 (and post-menopausal).