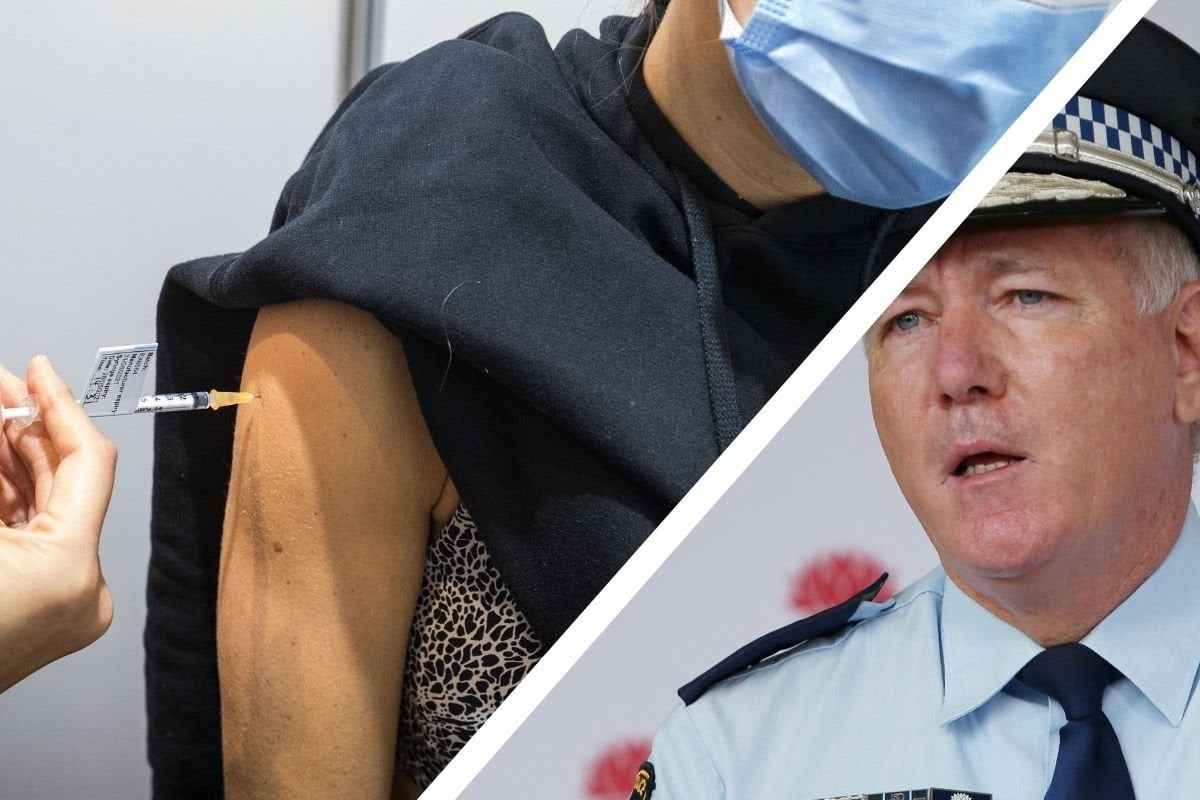 Aged care and quarantine workers will be compelled to get a COVID-19 jab and doctors allowed to give the AstraZeneca shot to under-60s, as governments seek to revive the vaccine rollout.

The prime minister met with state and territory leaders for a virtual national cabinet meeting on Monday, as the proportion of fully vaccinated Australians stood at just under five per cent.

Timely update that Australia's vaccine rollout is still the worst in OECD, and still not on target. pic.twitter.com/o4V6P8oR0o

Until now the advice from medical experts has been not to force workers to be vaccinated. But Mr Morrison said that advice had changed and state public health orders and Commonwealth measures would be used to enforce the new rules, with the aim of completing the task by mid-September.

"This has been a difficult group to get vaccinated (but) ... I'm pleased we have finally got here tonight," he said.

Advocates in the sector have been concerned forced vaccinations will lead to a flood of staff leaving, or large gaps in rosters as workers are impacted by vaccine side-effects.

To make this easier, the federal government will provide $11 million to cover paid leave for workers having vaccinations.

$11 million to fund leave for aged care workers is completely inadequate. There are over 180k workers - they need 2 doses and 25% of them will experience side effects that require time off work.

Vaccination and testing of all quarantine workers will also be made mandatory, including those involved in transporting people to quarantine.

The states and territories will be in charge of the program and no timeframe has been set for its completion.

National cabinet also agreed to compulsory post-quarantine testing for returned travellers, which must occur two to three days after they leave.

And in a bid to encourage broader vaccination, the federal government will provide a no fault indemnity scheme for GPs who administer COVID-19 vaccines.

The scheme would enable, for example, a person under-60 who is happy to get the AstraZeneca vaccine - which is currently only recommended for over-60s - to do so if their doctor considers it is the best option.

Mr Morrison said it was hoped with the changes, as well as a boost to vaccine supplies, Australia could "move through the balance of the program over the course of this year".

Three cities in lockdown, with QLD weighing their options.

Three capital cities are in COVID-19 lockdown with Perth joining Sydney and Darwin after another confirmed virus case in the west.

IMPORTANT: Following the detection of another local case in Perth’s northern suburbs, Perth and Peel will enter a circuit-breaker lockdown for a minimum of four days from midnight tonight. pic.twitter.com/5aR0qZ1mTF

A man in his 30s is the latest case in Perth. He worked and dined at the Indian Ocean Brewery on the same night as another positive case - a woman who travelled from Sydney. She also came into contact with a 32-year-old woman who has tested positive.

With Sydney in lockdown, NSW recorded 18 new coronavirus cases with all but one confirmed as linked to existing cases.

Queensland is on the verge of another lockdown in the state's southeast after two new local cases, with more than 160 returned mine workers being tested.

In the Northern Territory, an outbreak linked to a central Australian mine has grown to seven cases, sparking an extension of a snap lockdown until at least Friday.

Darwin will remain in lockdown for an extra 72 hours amid a growing COVID-19 outbreak. #9News pic.twitter.com/jDwaVwfuTq

Naked sunbakers and the 'Prime Creator of this Earth': Sydney's strange press conference.

Two naked men who got lost in a national park south of Sydney are among 44 people who have been fined for breaching COVID public health orders.

The men were nude sunbaking at a beach on Sunday when they were startled by a deer and sought refuge in the nearby Royal National Park at Otford in the Illawarra.

In a cascading series of unfortunate events, they got lost in the bush and were forced to call authorities for help. The men were fined for breaching public health orders which mandates those in Greater Sydney and surrounds must not leave their home except for an essential reason.

NSW Police Commissioner Mick Fuller says $1000 fines were issued to nude sunbathers on the South Coast, after they were 'startled by a deer', ran into a national park and contacted SES for assistance. pic.twitter.com/CFqPJdAkmO

"It's difficult to legislate against idiots. But clearly putting people at risk by leaving home without a proper reason, and I think then not only on top of that, but then getting lost in the national park and diverting important resources away from the health operation, I think they should be embarrassed," Mr Fuller said.

During the press conference, a man claiming to be The Prime Creator of Earth, then tried to hand Fuller a cease and desist letter.

"Don't come near me," Fuller warned, as he tried to join the presser.

"Don't come near me!" NSW Police Commissioner Mick Fuller interrupted by bearded man claiming to be the creator of the Earth. #nswpol pic.twitter.com/P6K0SZ8WmR

The Tourism and Transport Forum says the industry will struggle to survive more lockdowns. It estimates the latest COVID-19 outbreak and the border restrictions imposed on Sydney and NSW residents will devastate the mid-year school holiday period for travel-related firms, with spending predicted to be down by $6.3 billion nationally.

The NSW lockdown, spanning over the entire two-week school holiday period, is expected to cost the struggling tourism industry more than $6 billion. https://t.co/alO0e2QCO4

It's the third school holidays in a row that a COVID outbreak had forced a lockdown in a capital city.

TTF data showed that in the equivalent 2019 school holidays more than 1.7 million Australians travelled domestically but it's predicted the Sydney lockdown will see that number drop by 73 per cent - to about 460,000 travellers.

Victorian Premier Daniel Andrews has attacked his political opponents for spreading "vile" rumours about the nature of his fall on his first day back in the top job.

Mr Andrews held his return press conference at the site of one of his government's signature infrastructure projects, the Metro Tunnel.

Sporting a hard hat and hi-vis vest, he began by asking reporters if they were "right to go" - a nod to the 120 consecutive daily press conferences he held during the state's second wave of the COVID-19 pandemic.

Mr Andrews thanked Deputy Premier James Merlino for leading the state during his leave, his family, medical staff and colleagues, as well as the many Victorians who sent well wishes as he recovered.

"I am fit, I am back and make no mistake, we're here to get this done," he told reporters on Monday.

Mr Andrews fractured his spine and broke several ribs when he slipped and fell while getting ready for work in the Mornington Peninsula on March 9.

In his absence, various unfounded rumours circulated online and were fuelled by Shadow Treasurer Louise Staley when she called on Mr Andrews to answer 12 questions about his injury.

Asked why he didn't address the rumours surrounding his fall earlier, Mr Andrews replied: "Never get into an argument with a fool".

Vaccine professionals given standing ovation as Wimbledon gets underway.

The two-year wait for tennis at Wimbledon ended on Monday as the action finally got underway following a delayed start due to bad weather.

Fans were back at the All England Club after last year's tournament did not take place due to the coronavirus pandemic.

Guests of the Royal Box on Monday included Dame Sarah Gilbert, who co-designed the Oxford/AstraZeneca vaccine, and Sir Andrew Pollard, head of the Oxford Vaccine Group, who were given a standing ovation ahead of the first match of the tournament.

Medical professionals who helped develop the coronavirus vaccine were given a standing ovation ahead of today's first match on Wimbledon’s Centre Court https://t.co/XPB3HM4KfH

Capacity for the first week of the tournament is 50 per cent, rising to 100 per cent for the finals weekend.

Spectators are required to wears masks while walking around the grounds but not while seated at the courts.

Racism against people of African descent remains systemic in many parts of the world, the UN's human rights chief says, calling for states to dismantle discrimination and prosecute law enforcement officials for unlawful killings.

In a global report sparked by the murder of George Floyd by a police officer in Minneapolis in May 2020, the UN's Michelle Bachelet said police use of racial profiling and excessive force is entrenched in much of North America, Europe and Latin America.

The UN human rights chief urged nations to root out systemic racism against people of African descent on Monday, as she released a report calling for measures to dismantle discrimination and for sweeping changes to policing, as well as reparations. https://t.co/2XlYRblTlA pic.twitter.com/uLQZ6n0tba

"I am calling on all states to stop denying, and start dismantling, racism; to end impunity and build trust; to listen to the voices of people of African descent; and to confront past legacies and deliver redress," she said in the report to the Human Rights Council.

Bachelet welcomed a "promising initiative" by US President Joe Biden in signing an executive order in January to address racial inequity across the United States.

Her report cited 190 deaths of Africans and people of African descent worldwide at the hands of law enforcement officials who are "rarely held accountable".

It selected seven "emblematic cases", including that of Floyd.

"There is today a momentous opportunity to achieve a turning point for racial equality and justice."

- Rescue workers have pulled a 10th body from the rubble of a collapsed Florida condominium as officials vowed to keep searching for any possible survivors five days after the 12-storey building fell without warning as residents slept.

- Coronavirus restrictions are being eased in Sweden and Pakistan this week and officials in the United Kingdom say they are on track to end all curbs on July 19.

- French police are looking for a woman who caused a massive crash at the Tour de France, after she accidentally struck a rider with her cardboard sign while perched on the side of the road.

Reply
Upvote
1 upvotes
"Two naked men who got lost in a national park south of...