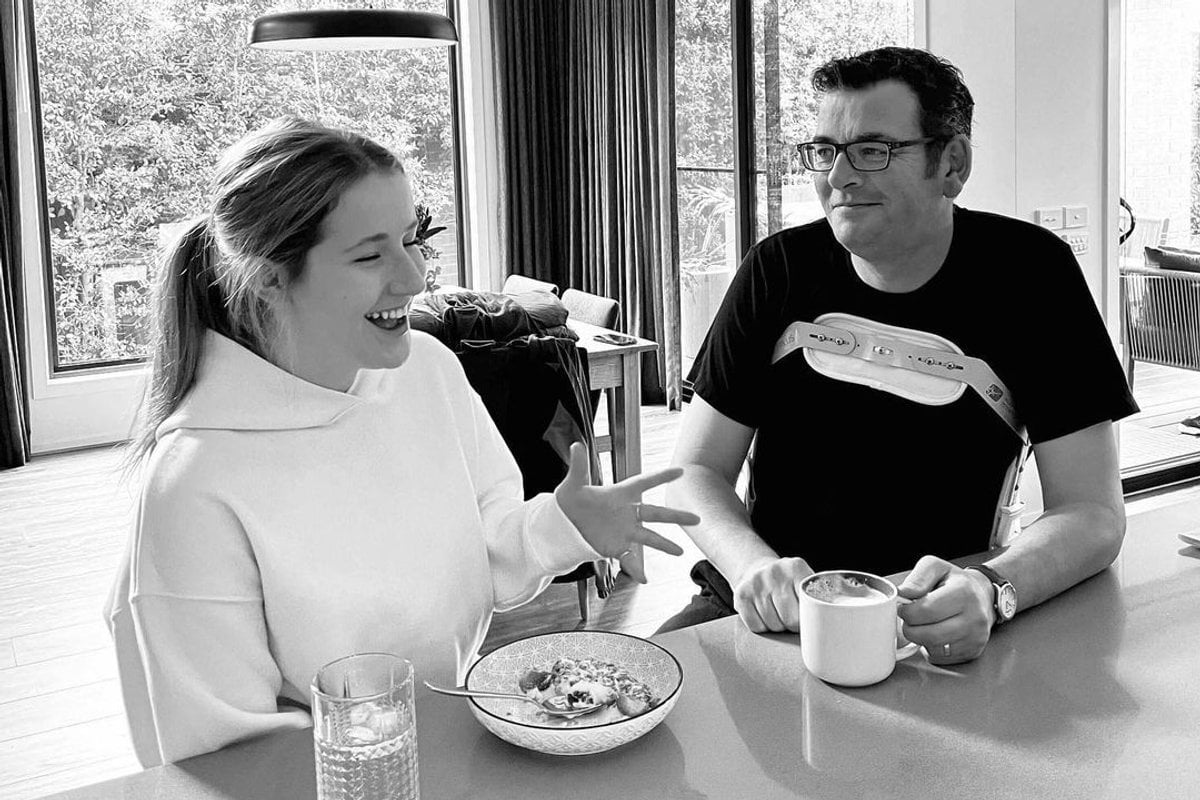 Over 17 weeks, Andrews spoke every day to a swarm of journalists desperate for news to feed back to the 6.3 million Victorians whose livelihoods relied on what came out of his mouth.

So, where is Dan Andrews?

Mr Andrews was admitted to Intensive Care, before he was released a couple of days later to recover at home.

Good to get out of ICU and settled in new digs.

Thanks for all your messages and well wishes. It really means a lot. pic.twitter.com/ujdm3WJ3a9

On April 18, Mr Andrews said he was making steady progress and is "being diligent with [his] physio exercises".

He added: "A couple of weeks ago when I started daily walks, I could only manage about 15 minutes – now I’m out for almost an hour."

Just wanted to give everyone an update. Thanks to the best of care, I’m making slow and steady progress.

A couple of weeks ago when I started daily walks, I could only manage about 15 minutes – now I’m out for almost an hour.

Andrews added his team is confident he will be back at work in June.

Mr Merlino also said the Premier was supportive of their decision to enter a seven-day lockdown.

Here's what else we know about Daniel Andrews, who has been the leader of the Victorian ALP since 2010.

Daniel Andrews has been married to wife Catherine for more than two decades, with the couple sharing three children together: Noah, 18, Grace, 16, and Joseph, 12.

They met when she was 24 and he was 26 at Monash University’s Catholic on-campus accommodation and married in 1998.

"We are just normal people, a normal family. We live in an ordinary home in a small street in suburban Melbourne," Catherine told The Herald Sun back in 2015, soon after her husband was first elected as Premier.

Ms Andrews is the director of The Torch, a Victorian organisation that supports Indigenous offenders and ex-offenders through Aboriginal art, and in July shared a glimpse into their life in lockdown.

"This man does not stop," Ms Andrews wrote on Twitter.

This man does not stop. Thank you to everyone who is doing the right thing. We are in this together. #istandwithdan ❤️❤️❤️ pic.twitter.com/W63ANZix5n

Last Father's Day, Catherine Andrews again shared how hard her husband was working ahead of his announcement on the then-highly-anticipated roadmap out of stage four lockdown.

"No time for a special breakfast around here this morning. Too much to do," Ms Andrews shared to Instagram. "Our three are so lucky you are their dad. We are proud of you each and every single day."

No time for a special breakfast around here this morning. Too much to do. Our three are so lucky you are their dad. ❤️❤️❤️ We are proud of you each and every single day. ❤️❤️❤️ To my dad who isn’t on social media, I love you and I miss you. ❤️❤️❤️ For anyone who finds this day hard, I’m sending you lots of love and a big virtual hug. ❤️❤️❤️

As she explained to the Herald a few years ago, life in the Andrews home is pretty reminiscent of most Australian families: "Our kids go to local schools. We go to the local shops; there’s nothing special about us. Daniel just happens to be the Premier — that’s his job."

You only turn 18 once. Couldn't be more proud.

Another big milestone at our place – 16 today. We love you Grace.

Noah, like so many other Australian Year 12 students last year, had  no formal, schoolies or graduation.

"I know this hasn't been easy. My son Noah is studying hard for his upcoming SACs. It's hard on teachers, hard on kids, and it's hard on parents," said Andrews in August, while his state was only days into the tough new rules.

Like the rest of Victoria, he did parent-teacher interviews via Zoom and cut his kids' hair in the lounge room.

Next time I'll get the bowl out.

Andrews grew up in Melbourne until his family's business - a milk bar - burnt down in a suspected arson attack when he was 10 years old. Afterwards, his family moved north east to Wangaratta.

Andrews' family was very religious and he spent his teenage years helping his dad run a Don Smallgoods franchise, dropping off goods to every butcher shop, deli, cafe and pub in the area. 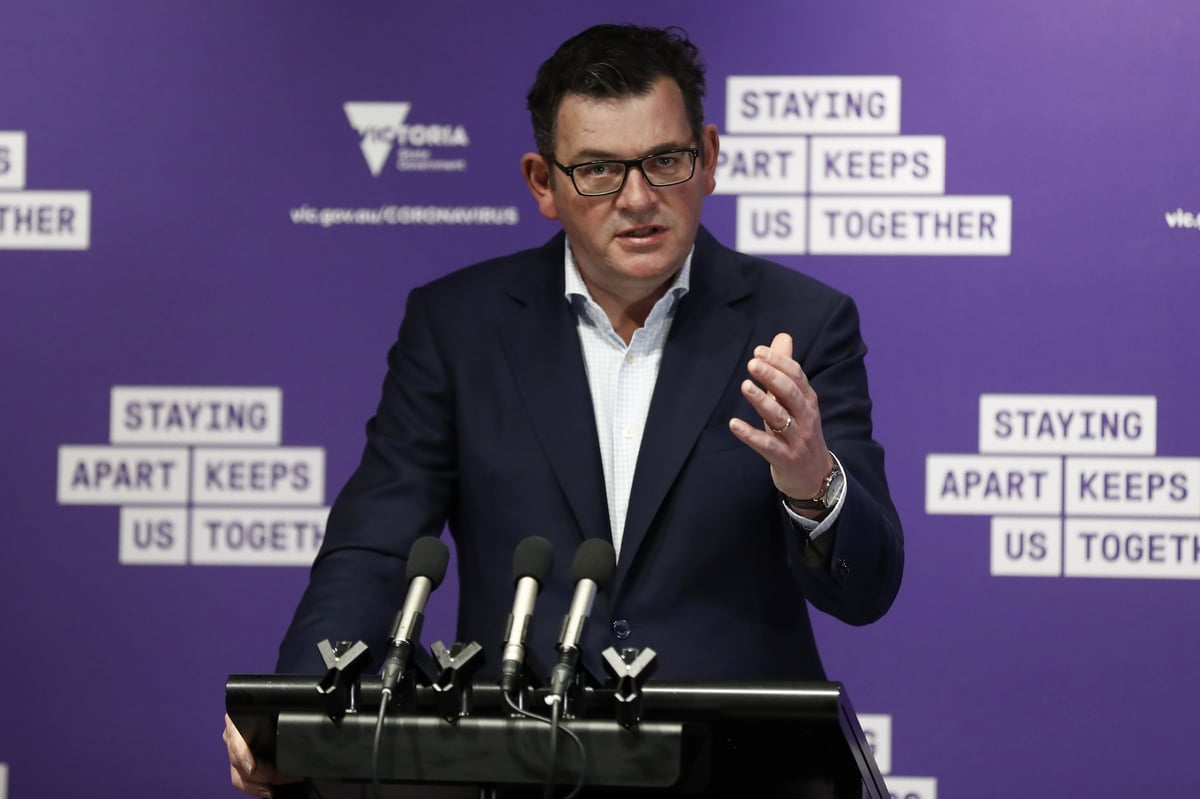 During lockdown, the Premier explained that his personal background meant he understood the frustration many small businesses were going through.

"I know and understand, because I watched my parents do it, for every day of their working life, what it takes to build a business from nothing into a very successful business," he explained. "They then saw that wiped away through no fault of their own.

"I've seen that up close and personal. I worked in those businesses from the moment I was old enough to - I thought it was probably a bit early, but I was there doing what I had to do and that is my background."

He went on: "We will get these businesses open as soon as we can. And I'm disappointed too that I cannot have better news for people today."

The car crash that made headlines.

In 2013, Catherine Andrews collided with a teenage cyclist in the Mornington Peninsula town of Blairgowrie, while the whole family was in the car.

The 15-year-old they hit was left with life-threatening injuries and airlifted to hospital. Ms Andrews was not breath tested at the scene, which is standard protocol.

Mr Andrews, who was the Victorian Labor Leader by that point, came under intense scrutiny for this apparent oversight, but insisted at the time: "If she had been requested to take a breath test I'm very confident she would have agreed to that and the reading would have been zero-zero."

The family of the boy also came out and expressed their dismay that the Labor Leader hadn't reached out to them, but Mr Andrews insisted he was waiting for the police investigation to wrap up first.

As the story continued to make headlines, The Independent Broad-Based Anti-Corruption Commission (IBAC) announced it would investigate the conduct of the officers at the scene, but not that of the Andrews'.

One of the longest serving ALP leaders

Daniel Andrews has been in charge of the Victorian ALP since 2010, making him one of the longest serving leaders, notching up two election wins in two attempts. The most recent of which, in 2018, was a landslide.

As to how he got there, he was elected to parliament in the seat of Mulgrave in 2002 at the age of 30 and became Secretary for Health.

He went on to become Minister for Gaming, Consumer Affairs, Multicultural Affairs, and Minister for Health before becoming Premier in 2014. 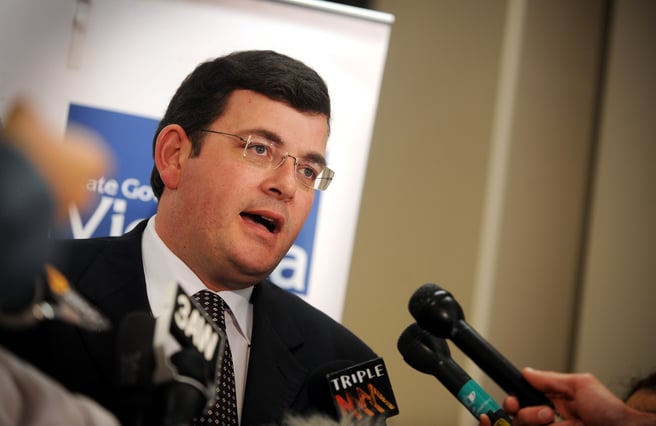 One of the most significant recent successes from his term in office came in the form of the Voluntary Assisted Dying Bill which came into effect in 2019, making Victoria the only state to legislate voluntary assisted dying.

But his popularity and success as Premier hasn't been without its challenges.

In 2018, his party was found to have used taxpayer money to fund campaign workers during the election, and in 2014 he spent $1 billion dumping the Napthine government’s East West Link road.

The coronavirus pandemic has proven to be Daniel Andrews biggest challenge yet, and it's come straight off the back of dealing with the 2019/20 bushfire season. 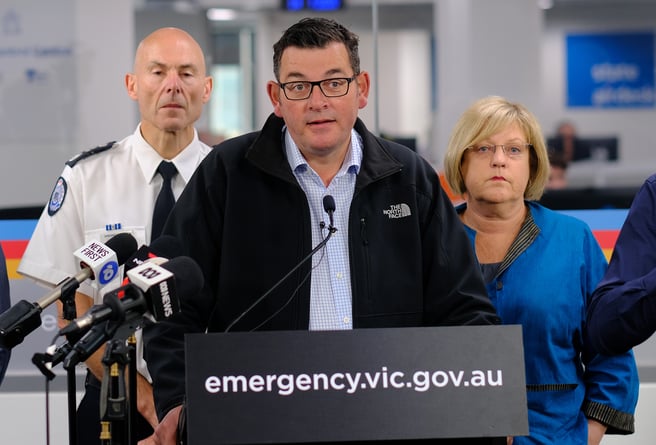 Victoria was also one of the states hit the worst by the recent bushfire season. Image: Getty/Luis Ascui.

From the very beginning, his government took a hardline approach with the state and was criticised for its "tougher" lockdown stances - in particular the refusal to let schools go back when the other states had started to allow it.

There's two camps when it comes to the Victorian Premier's leadership during the pandemic. He's either "doing a great job" or he's turned Victoria into a dictatorship.

In April 2020, Newspoll found 85 per cent of Victorians thought he was handling coronavirus very or fairly well.

In May 2020, his approval rating sat at 75 per cent (still better than other premiers except for the leaders of WA and Tasmania).

By July 2020, only 57 per cent were satisfied, with the Premier's approval rating dropping 20 points in three weeks.

LISTEN: To the stories from inside the lockdown. Post continues after podcast.

This article was originally published on August 21 and was updated on May 27, 2021.

S
sarah a year ago

Reply
Upvote
4 upvotes
Dan is the worst premier! who cares what he's been doing. I hope he takes his time and enjoy quiet time for months before returning
M
michael a year ago