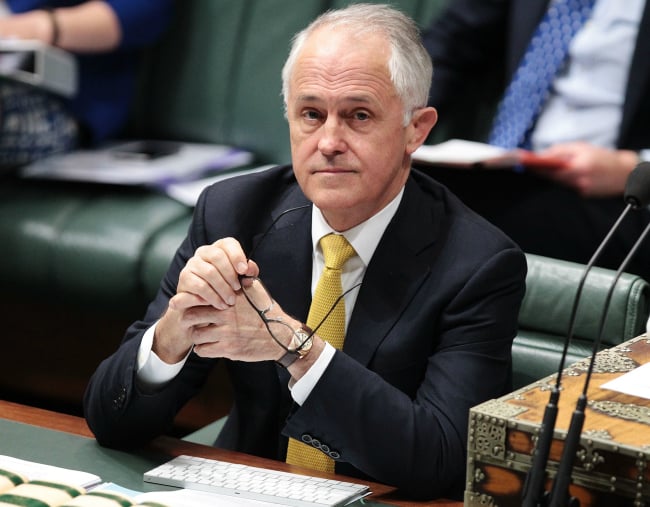 The prime minister declared the leadership vacant after entering the party room with his deputy Julie Bishop shortly after 9am on Tuesday morning.

“He thanked his colleagues for their support,” Ms Marino said.

After Mr Turnbull called the spill, Mr Dutton put his hand up to challenge.

Despite Mr Turnbull’s capitulation to energy policy rebels in his ranks, the threat to his leadership did not dissipate.

“I’m certain he is telling the truth,” he told the Nine Network.

“I think the public would react very negatively to another change of leadership without them having a vote.”

A report in The Australian suggests Mr Turnbull had lost confidence of nine Liberal cabinet ministers – half of the Liberal contingent.

Mr Dutton’s camp believes it could get to the 43 votes needed to oust Mr Turnbull, but the prime minister’s backers says he still had majority partyroom support.

Fellow MPs from Mr Dutton’s home state of Queensland are also understood to have been encouraged to turn on Mr Turnbull.

Small Business Minister Craig Laundy warns that would go down like a lead balloon.

“If we are fighting amongst ourselves, guess what, when the voters go to the election, they’ll mark us down as they should,” Mr Laundy said.

“They want us to know that we should be concentrating on the things that are important to them.”

Liberal backbencher Tim Wilson acknowledged the numbers were being counted in the party room.

“I don’t actually expect a challenge today, but we’ll wait and see,” he told the ABC on Tuesday.

Mr Turnbull told reporters earlier on Monday he had the confidence of Mr Dutton, the cabinet and the partyroom.

Adding to the prime minister’s woes have been a string of poor poll results.

Labor frontbencher Anthony Albanese said the prime minister should call an election, if he survives the week.

“I think that would be a good thing for the nation, because something has to change, this is chaos in the parliament at the moment,” Mr Albanese told Sky News.

Bit of an implosion for the LNP.

Reading some of Rupert's mastheads, he appears to have anointed Dutton, suggesting (somewhat redemptively) that Turnbull isn't giving the Murdochs everything that their heart desires.

You forgot the “blackened” before “heart”

It was pretty funny cracking open the Herald Sun at lunch, knowing Dutton had failed in his coop, to read all about how Dutton should be PM and is the best man for the job.
Today's should be pretty amusing too.

I don't think that the dust has settled just yet. The hard right of the LNP are on the move. Dutton appears to have the backing of News, if you look at their headlines of late.

Dutton is already dogwhistling on race and pork-barrelling on energy, he possibility has the ability to bring across enough of the LNP's base over time, but I think (hope) that he's too unsympathetic and unpopular a figure to win a general election, partially because he plays the race card frequently and fragrantly. I, personally, dislike and mistrust the power and abuses of privacy that he's managed to accumulate under the security banner.

Dutton's also been a denier, and I think that the voting public are pretty jaded with the head in the sand approach to climate change. I suspect moderate Libveral voters want to see tangible action on climate. I note, however, that Dutton was careful to mention renewables when referencing energy in his stump speech. Maybe the weather vane will swing to where the breeze is prevailing and convenient.

Pfft, these people don't have hearts. They have some sort of robotic fuel cell.

They never learn. I think most voters would still prefer an unpopular leader to one that took over via "coup".
The whole political system needs a revamp. The party system is no longer the optimal way of running the country nor is a system where the PM can be changed with no buy in from the people.

You need to tread carefully on protecting leaders' positions too strongly, because you could end up installing someone like Trump and being unable to remove him.

In general though, I do agree with you that the "coup" and swapping the leaders for political convenience (from both sides) is disheartening for the average voter or even those rusted on.

Ummm, Turnbull took over via a "coup".