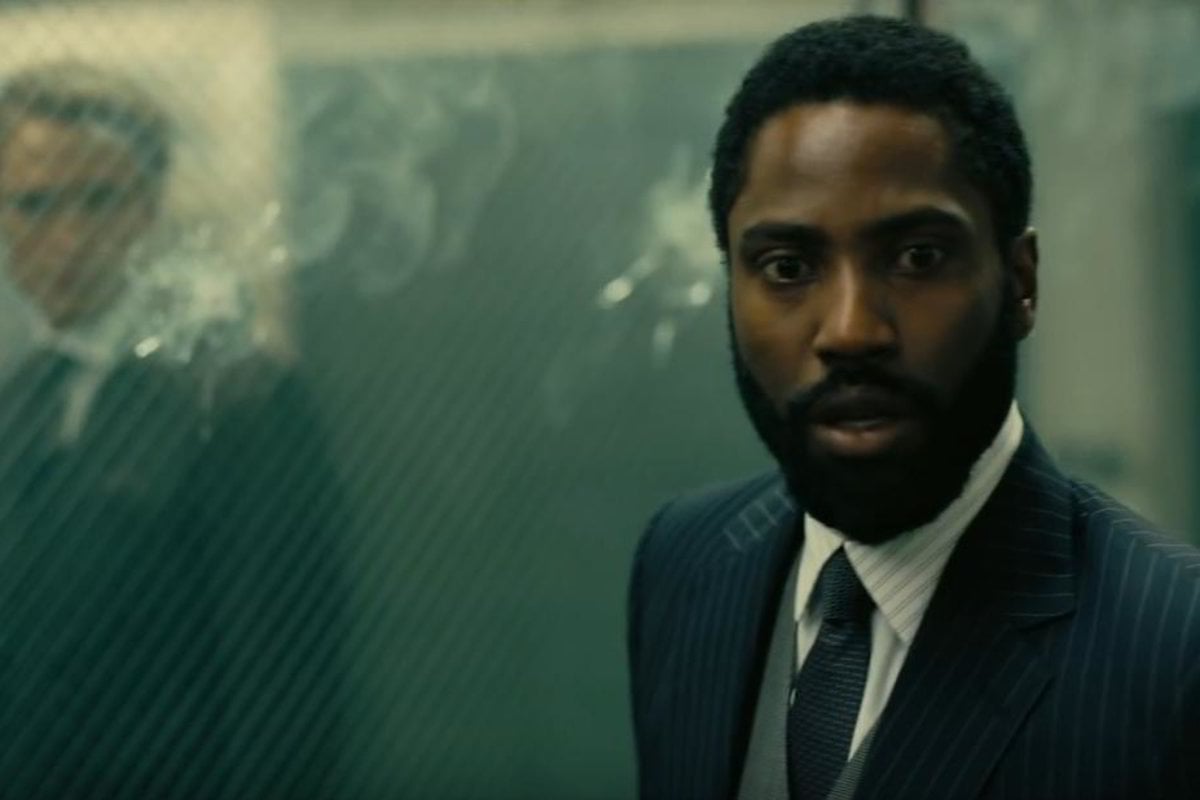 Here's an abridged version of my thoughts while watching Tenet:

And so on, for like two hours and 47 minutes.

In case you missed it, Tenet is the latest blockbuster from director Christopher Nolan, the mastermind behind Inception, Dunkirk and The Dark Knight trilogy. I loved all those movies, like absolutely everyone else in the world, so I had high hopes for this one.

It's also one of the first big-budget films since the pandemic to be released in cinemas, rather than direct to streaming services - take that as a confident sign it's likely to draw a crowd. (Our session had like 14 people, which I think counts as a crowd in 2020.)

Tenet is classic Christopher Nolan - time-twisty, dark and super tense. ﻿It drops you right into the action, at the scene of an attack on a live symphony in Russia. There's a lot of running and yelling and explosions and that's basically how it rolls until the end credits. 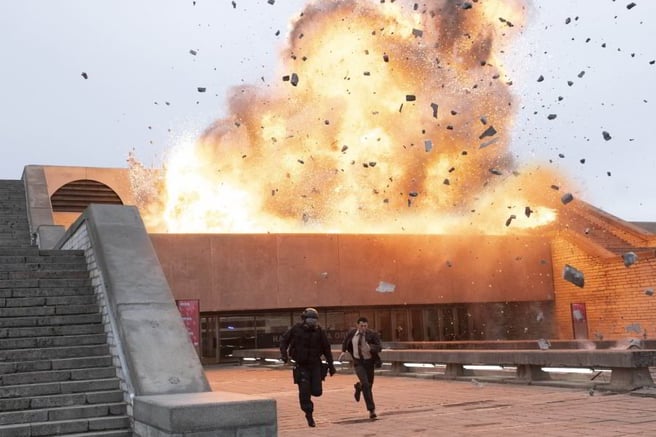 We meet our leading man (Blakkklansman's John David Washington), who goes by the name of 'The Protagonist', and his trusty sidekick (Robert Pattinson) who much less mysteriously goes by 'Neil.'
﻿ 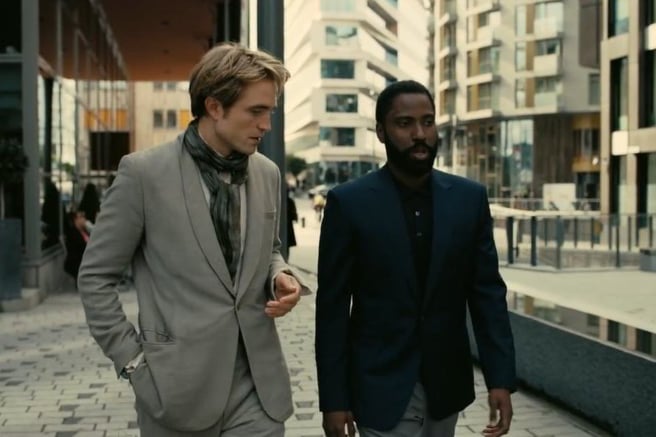 'Neil' and his jaunty necktie, and The Protagonist. Image: Supplied.

Possibly the biggest plot twist of the movie is that Edward Cullen Pattinson is actually really likeable as the wise-cracking, floppy-haired associate, and I would've gladly sat through two hours and 47 minutes of that. 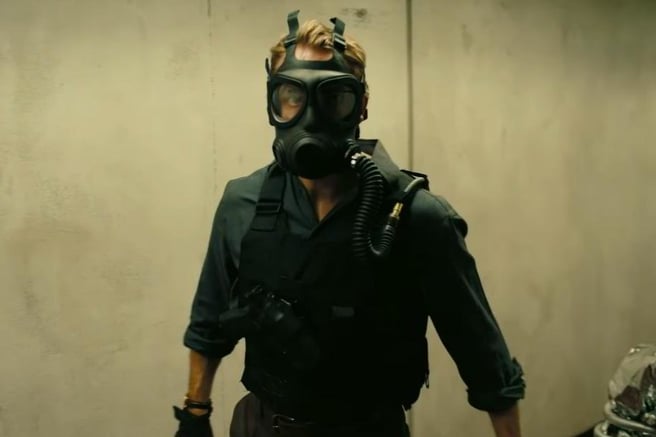 But alas; no. This is a movie, and it requires a storyline, which I'll really try my best to explain.

After the attack in Russia, The Protagonist is rescued and assigned to a top-secret assignment called Tenet. He finds himself in a research facility, where a scientist explains to him that they have discovered objects *from the future* that have been 'inverted'. Rather than moving forwards, these objects travel backwards in time. She demonstrates this with a bullet: instead of The Protagonist shooting the bullet, he 'catches' it with his gun.

The implications of this future technology are vast and potentially devastating, ie: imagine if an atomic bomb went off backwards through time and blew up the past - future generations would cease to exist! Or something like that.

So The Protagonist and his mate Neil are tasked with saving the world from a disaster that hasn't happened yet, by averting it in the past.

At this point we're introduced to the female lead, a glamorous art historian named Kat (Aussie actor Elizabeth Debicki), who accidentally married a Russian billionaire that wants to destroy the world ¯\_(ツ)_/¯ 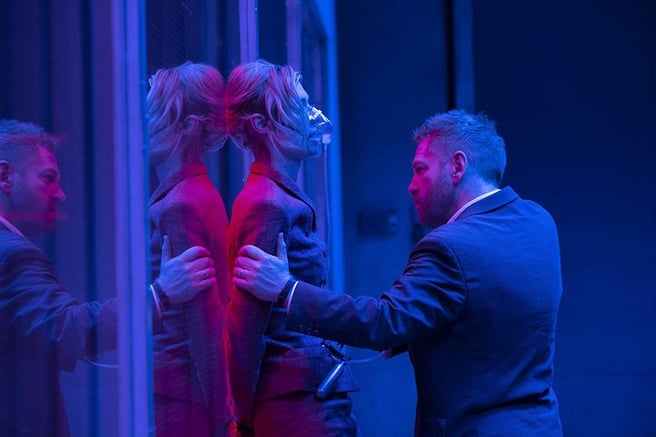 He also has an evil lair. Image: Supplied.

He's horrible to Kat, but blackmails her into staying in their marriage by threatening to cut off her contact with their son.

Kat and her awful hubby have a super-yacht they sail around Italy, and that's where I started feeling like I was maybe watching a Bond film - only with fewer martinis/Aston Martins and more convoluted musings about time and space. I would've vibed more on the martinis.

Anyway, I won't say more because any spoilers I inadvertently reveal will probably just confuse you further.

Tenet is also riddled with clues and subtle hints that probably make it worth a re-watch. ﻿True to Nolan's body of work, it's a movie made to be Googled; to be picked apart by eagle-eyed YouTubers like a Taylor Swift film clip. But﻿ I didn't pack a notebook for this shit, and concentrating that hard in a movie just feels stressful in 2020.

Look. I didn't hate Tenet, but I also didn't love it. I left the cinema feeling a little deflated after waiting months for the release. It's worth seeing for the impressive visual effects and the novelty of going to the movies, if you can. (Warning, it's also VERY LOUD, which is actually a plus for opening chip packets and repeatedly asking your fiance what the f**k is going on.)

Have you seen Tenet? Share your thoughts in the comments below.