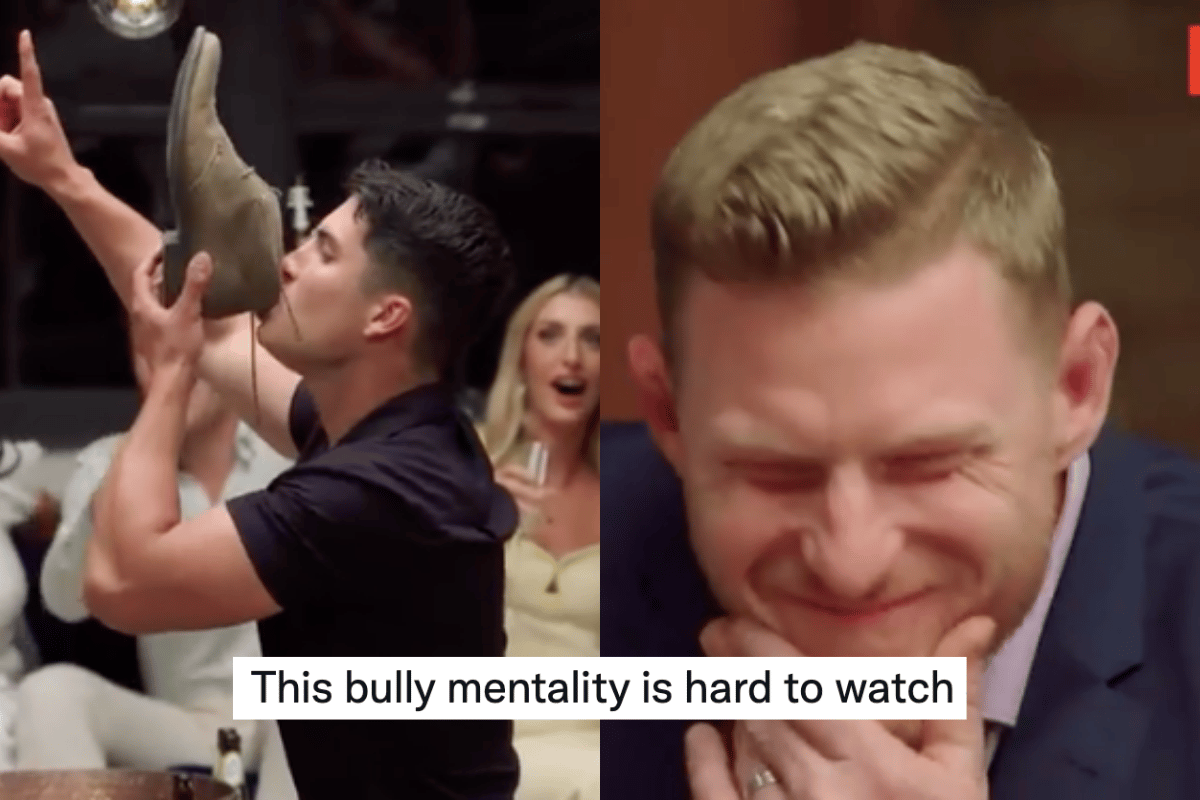 To catch up on all the MAFS 2022 recaps and gossip, check out The Twins recaps and visit our MAFS hub page.

It goes without saying, Married At First Sight this season has given us one drama after another.

Already we have seen one groom walk away from his bride, another tell his wife she isn't all that good in bed, and one very sexually frustrated couple.

Now, after watching eight couples tie the knot in extravagant weddings, we are finally up to the biggest event of all: the dinner party

And oh boy was it a lot.

Tonight was bloody awkward as we watched it all unravel while contestants rubbed shoulders for the first time since getting married.

We saw Selin awkwardly navigate it all without her partner by her side, Al show us his age when he took a swig of beer from his literal shoe and Domenica pounce on the first sign of drama.

It may not be the show for everyone, but it sure does make us laugh and apparently that's how the majority of Australia feels considering the hundreds upon hundreds tweets just from tonight's episode.

So we decided to show the best 20 memes and reactions we've seen this evening - from hilarious and utterly savage, to crude and brutally honest.

Selin not throwing Anthony under the bus #MAFS #MAFSAU pic.twitter.com/GHoIkUgPYm

Ok so now i think Al is actually the smartest guy in the room. Already knows he’s getting nowhere with Sam so may as well go out swinging… #MAFS #MAFSAU #MAFSAustralia

Honestly don't see any problem with Al having some fun at the dinner party. There's lot more worse and depressing ways to get through a dinner party.

Selin: "And when we got to the hotel Anthony like opened the door for me against my will and then he wanted to carry my bag, which I totally did not give him permission to do. I barely got out of the honeymoon alive if I'm being honest" #MAFS #MAFSAU

Al: I need to hold back a bit

Any punch ups yet #Mafs #mafsau

Ok so now i think Al is actually the smartest guy in the room. Already knows he’s getting nowhere with Sam so may as well go out swinging… #MAFS #MAFSAU #MAFSAustralia

Holly says so much and absolutely nothing at the same time #MAFS #MAFSAU #MAFSAustralia pic.twitter.com/Ac62R2z1L3

I’m so angry right now...god there better be some truths said at the couples session #MAFSAU

Was Al meant to be on love island and made a wrong turn??? #mafs pic.twitter.com/V632JF2ywl

Sure, he's not what Sam needs or wants but Al seems like a top lad. He seems pure and a bit lil a puppy who just wants to be liked by everyone.

You cannot deny that you'd never be bored and not have fun with him around. #MAFS #MAFSAU #MarriedAtFirstSight pic.twitter.com/jucXJLG8PS

i know it’s not what dinner parties are for, but i need some wholesomeness right now. give us some olivia and jackson. i beg. #MAFS #MAFSAU

Mel the expert: "Lemmie hear about some love..."

Translation: "Give me some hope for this bunch of cretins"#MAFSAU #MAFS

if a man is ‘sensitive’, it doesn’t make him less of man, thanks xx. #MAFSAU

Selin: "He left the honeymoon. He left me dry"

I am quite possibly in love with Anthony, hahaha #mafs #mafsau

#MAFS Aaaaaaaand where is YOUR apology to Anthony, Selin?? pic.twitter.com/gTss1B4zdh

Lots of loved up couples this year. Gees I hope they last longer than Neighbours #mafs #mafsau #MAFSAustralia pic.twitter.com/NMQaTbdcQP

Al wondering why his wife wont kiss him after drinking out of a mf shoe #MAFSAU pic.twitter.com/XQeIuAKXf3

It’s 2022 can we stop letting people get away with the “I’m not rude, I’m just honest” #MAFSAU