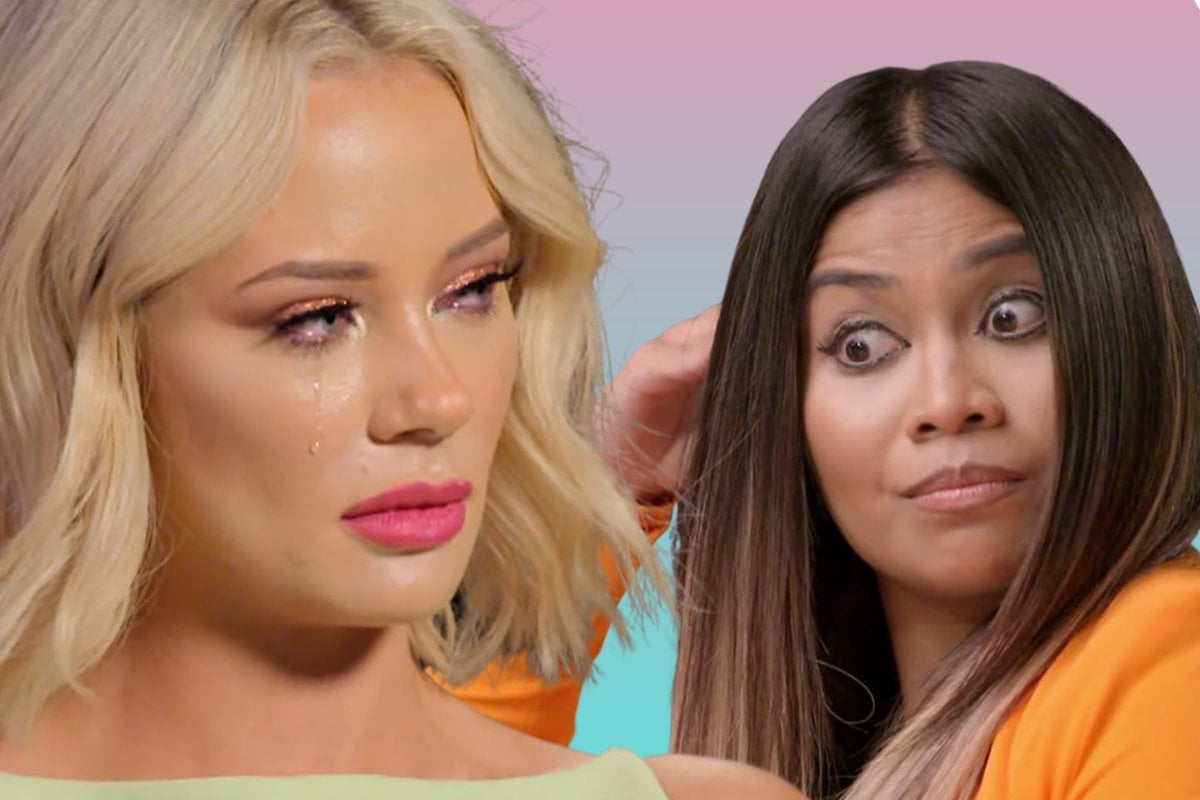 We are set to watch the most chaotic cast members from the last seven seasons of Married At First Sight Australia and one thing is guaranteed.

The two-part Grand Reunion will air on Sunday, January 31 and Monday, February 1, with insults, tears and maybe a thrown fruit bowl or two.

Watch: The latest trailer for the MAFS 2021 reunion. Post continues below video.

Plus, to remind us that the show has actually had *checks notes*... THREE success stories, some of the remaining couples will join in to show the rest of the cast exactly what the MAFS' 6.66 per cent success rate looks like.

It is going to be THE WORST and we can't wait.

Because we're impatient, we've done some digging and rounded up all the gossip and behind-the-scenes info we could find.

The Daily Mail has got its hands on a number of insults thrown at other contestants by season five's Nasser Sultan.

We have no idea how they managed to get such insider knowledge... but according to Nasser its 'inside source', he described Martha Kalifatidis as a 'Kmart Kim Kardashian' and her boyfriend Michael Brunelli as 'her doormat'.

He also referred to several of his co-stars as 'plebs' and 'seat-fillers', apparently.

Another participant apparently tells Martha to "take a social media course" because "no one cares about seeing her in a bath", which seems... like something only someone who looked through all of Martha's photos of herself in the bath would say.

Meanwhile, Tracey Jewel told So Dramatic! Nasser was a "narcissist" who "roasted everyone" during the reunion.

I think Channel Nine write 'must throw wine' into the MAFS contracts, so this makes sense.

According to the So Dramatic! podcast, Jessika Power and Cyrell Paule clash... a lot.

Jess supposedly brings up Cyrell's partner, former Love Island star Eden Dally, which leads to a very heated discussion and some wine-slinging (and perhaps a full jug too) that led to producers intervening.

This was confirmed by - surprise, surprise! - Nasser.

"Cyrell confronted her and it got heated, and she threw white wine all over her, in her face. It wasn’t even like on her shirt, it was in her face," he told host Megan Pustetto.

Tracey told Pustetto it was scary to watch.

"It went from an argument that went from boiling for a good few hours... then suddenly it took this next level of violence and aggression and no one really knew what to do.

"It was like, do you pull them apart? The producers had to end up coming in to pull Cyrell out of the room.

"I was really impressed with how Jess handled herself. She didn't yell back, she kept her tone calm, she removed herself by putting herself on the other side of the table. I saw a level of maturity in Jess that I didn't see two years ago when their season went to air."

Jess and Martha make up.

It's been hard to keep up with the feuds between season six stars Jess, Cyrell, Martha and Ines Basic, but there's supposedly one less thanks to the reunion.

So Dramatic! has the goss again, stating Martha pulled Jess aside at the beginning of the night and they hashed it all out.

Cool. Except that may have led to a new feud.

"They resolved their issues. Everyone was shocked, they were 'WTF? They hate each other, what is going on?'" Pustetto said.

"The main culprit was Ines, she was not happy that Jess had made up with her arch-nemesis Martha, so Ines stormed up to them during their chat and she’s like, 'What the eff are you doing, Jess? So you two are just effing friends now are you?'

"Jess was like, 'Babe, chill out,' and then Martha was like, 'Babe, we're just trying to be civilised. We're talking about women's positivity! Leave us alone.' ... Then Ines turned on Jess, like massively turned on her. They didn't speak all night and now Ines hates Jess and they're still not speaking."

Speaking to So Dramatic!, Tracey said the dinner party was one drama after another, including a point where everyone was having a go at Mike Gunner.

"They were like, about the Heidi [Latcham] thing and what happened when the cameras stopped rolling, that he was hitting on people and he's not who he portrays [himself to be]."

There are at least two walkouts.

Let's talk about Jess and Nasser again, as it's reported both of them walk out of the reunion at some point.

Nasser told the Daily Mail he walked out after an argument with Cyrell, in which she accused him of "trolling her baby".

Plus, The Wash published photos of Jess leaving the party in tears after filming in December. It all comes back to her fight with Cyrell about Eden, as mentioned above.

One of the accusations thrown at Cyrell is that her and Eden's relationship was a 'showmance', which leads to her calling out Ryan for what she describes as his showmance - with Geordie Shore star Charlotte Crosby.

A source told New Idea she "ripped him to shreds" and accused him of faking his feelings during 2020's I'm a Celebrity... Get Me Out of Here! for the cameras.

"Ryan proved to be no match for Cyclone Cyrell - he was left fuming by the whole thing," the source said.

Oh my god, we're tired just thinking about this reunion.

Make sure you get a nap in ahead of time, because the Married At First Sight Grand Reunion will air over two nights on Sunday, January 31 at 7pm and Monday, February 1 at 7.30pm on Nine and 9Now.