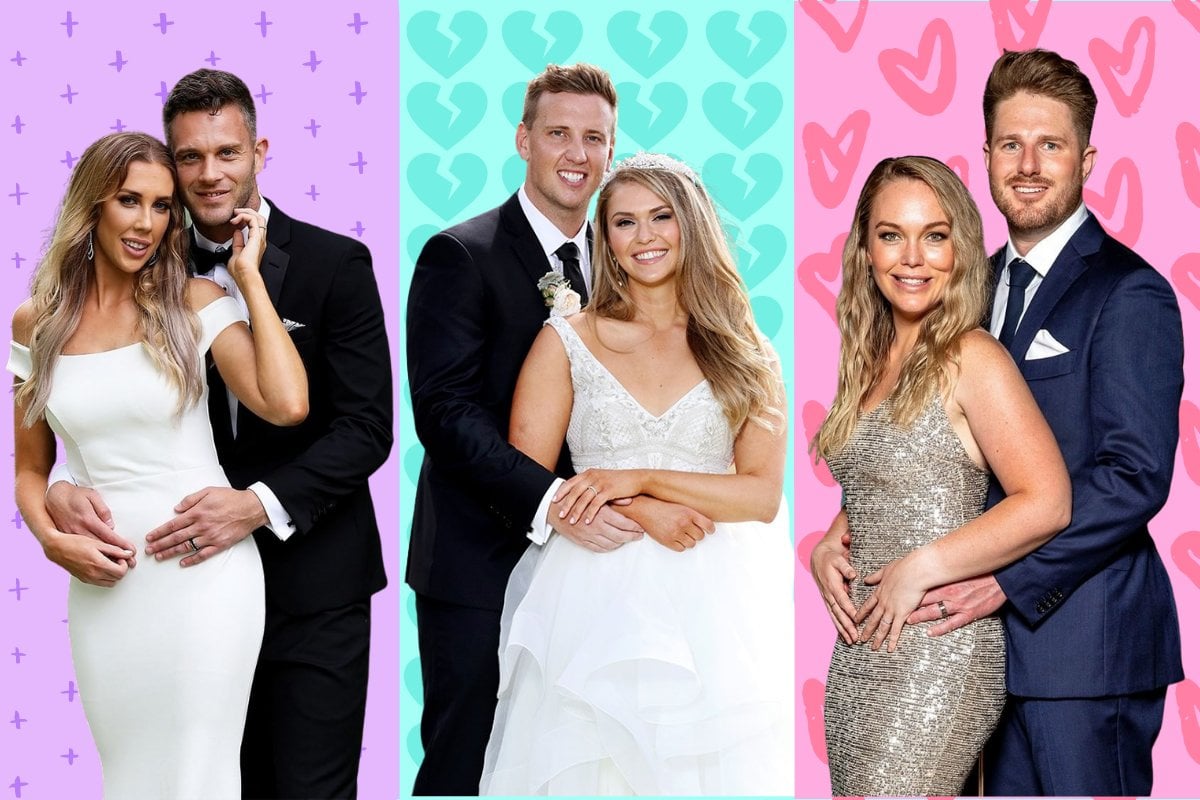 Married At First Sight is definitely a marathon, not a sprint.

Maybe it's even an ultra-marathon. Seriously, this show is... so, so long.

But we're allegedly almost at the end, as the final vows finally took place this week before things wrap up for good with the reunion show on Sunday, April 18.

Get ready to have a whole lot more free time from next week.

We're only just watching the season's last moments on screen now, but of course these things were filmed back in December. Which means in true MAFS fashion, plenty of drama has gone down since.

Here we've rounded up the breakups, set ups and drama that has gone down since the final vows.

The moment directly after Georgia and Liam's major twist.

We definitely weren't expecting Georgia and Liam's final vows to go down like that.

Liam had professed his love to Georgia, who in her vows accused him of humiliating, degrading and gaslighting her. She said she forgave him and wanted to be with him, but Liam was like... BYEEEE.

When Georgia picked herself up off the checkered floor of whatever Gatsby-style building they found themselves in, this is what happened:

"I was totally in shock. I couldn't even form a sentence and I couldn't process what had just happened because it was quite intense the whole thing," she told 9Entertainment.

"It took me a good five minutes before they kind of took me upstairs and then I just kind of curled up into a ball and cried because, how do you process that? I cared about him so much and we unravelled so fast. How did we get from so great three days ago to here? It was a lot to take on."

Beck and Jake broke up.

According to The Wash, after the final vows, Jake went to Perth to spend Christmas with Beck and her family but while there they had a fight and broke up.

They arrived at February's reunion filming separately, and Jake went public with his new girlfriend in March.

Hold up... A 'secret boyfriend' of Beck's may be outed at the reunion.

Beck's been pretty vocal about Bryce and his 'secret girlfriend' but now the tables have turned, with Bryce hinting that information about a guy Beck was seeing in Perth will come out during the reunion episode.

At the Fitzy & Wippa Married At First Sight Dinner Party in March, Bryce and Melissa spoke to the radio duo about their time on the show so far and dropped some info about upcoming drama. Seriously, how much more can we take?!

Bryce said Beck "was missing a boy back home" which is why she hadn't been intimate with Jake.

Wippa asked if she had another man at home in Perth.

"She wants to talk about me a lot [so] I should probably talk about her, shouldn't I," Bryce answered.

We're not sure what's going on here, but The Wash do have some pretty interesting evidence that Beck was in a relationship with a man called Ben in June 2020, a couple of months before filming for MAFS began.

Belinda and Patrick have gone the distance.

In less dramatic news (thank god), all signs point to Belinda and Patrick remaining a couple, drastically increasing the current success rate of this show.

The latest evidence comes from a pic of Patrick at the footy in April with his ring still firmly on his finger.

Bless. We needed this.

Alana and Jason broke up.

Alana had planned to choose 'leave' at the final vows but had a last-minute change of heart, meaning she and Jason left the show together.

But that has five months ago, and things have definitely changed in that time.

It's believed they split up soon after (via text, ouch!) and arrived at the reunion, filmed in February, separately.

And er, Jason may even be dating another MAFS alum, Tamara Joy from season six according to So Dramatic.

Melissa and Bryce have moved in together and he allegedly went ring shopping.

Now for some news precisely no one wants to hear.

It appears Melissa and Bryce are still going strong, if rumours are to be believed.

They're now living together in Melbourne, where Melissa is from, and pics published in the Daily Mail show him ring shopping.

But the pics are a little too perfect, if you know what we mean. He was carrying a huge bouquet of flowers and laughing to himself at... absolutely nothing. Just a little suss.

Speaking of suss, check out this fake Insta account which is really keen to support Bryce...

This is unverified but... embarrassing all the same.

Over on gossip queen So Dramatic's Instagram page, host Megan Pustetto noticed that among a sea of negative comments there was one vocal Bryce fan, with a really weird profile.

Kerry and Johnny are still together.

"I can confirm that Kerry and Johnny are still very much together," Pustetto said on So Dramatic!

But... it's a little juicier than it sounds, apparently.

"Johnny is actually an actor though, he was asked by a producer to go on the show and he did an audition; but, funnily enough, he and Kerry actually ended up working out."

You'd think we'd know better by now, but honestly, we didn't see that one coming.

A
amymonty a year ago

Reply
Upvote
What's that, the drama teacher was really an actor??? No!! *eyeroll*
A
anaparis a year ago

Reply
Upvote
2 upvotes
I didn't watch MAFS this year, but it's difficult to avoid all the media and publicity and not know bits of what's been going on.  One thing I've noticed in all the photos and short video clips I've seen is that most of the brides and grooms appear to be look like each other with the exception of a few.  Very difficult to tell them all apart.  The women are mostly white, blonde with the long same style of hair and the grooms are also blonde and same style hair.  Its like a TV show about Barbie & Ken
News
General
Opinion
True Crime
Politics
Sport
Explainer
Entertainment
Celebrity
Reality TV
Movies
TV
Books
Rogue
Royal
Lifestyle
Beauty
Fashion
Weddings
Home
Wellness
Health
Fitness
Travel
Food
Parents
Before The Bump
Pregnancy
Baby
Kids
Teens
School
Parent Opinion
Work & Money
Money
Finance
Career
Lady Startup
Relationships
Sex
Dating
Separation
Friendship
Family
Real Life
Couples