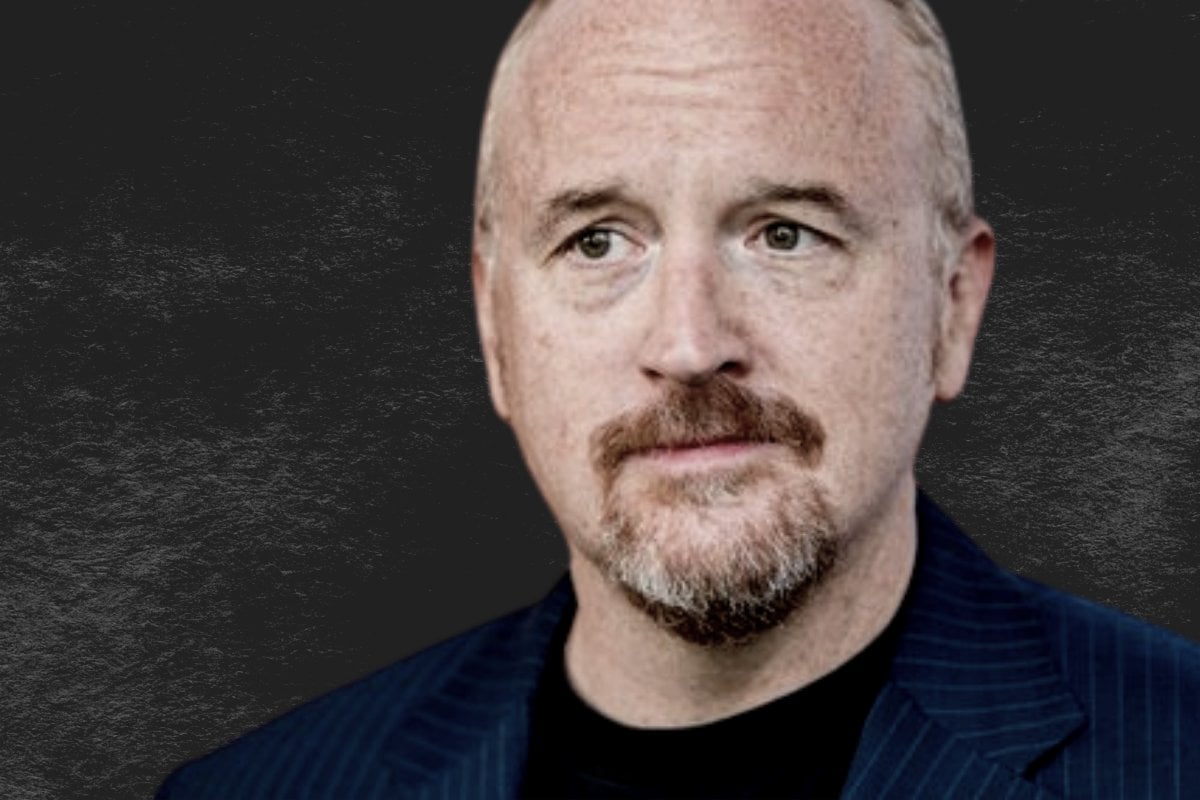 This article deals with sexual misconduct and might be triggering for some readers.

When the winner for Best Comedy Album was announced at the 2022 Grammy Awards, you could sense a brief uncomfortable energy shift in that room packed with perfectly quaffed celebrities.

It was a moment that hardly constituted a hiccup in the night's glitzy proceedings, with the only true nod to the confronting nature of the win being the moment presenter and actor LeVar Burton said, “Damn...I will accept this on his behalf,” before he swiftly left the stage.

But while all appeared well at the awards ceremony, which Louis C.K. did not attend and has yet to acknowledge, his win ignited a firestorm of debate that raged across social media, in newsrooms, and in group chats about what the accolade really meant for the man who had been 'cancelled' in 2017.

Watch: The women who worked for Harvey Weinstein tell their stories. Post continues after video.

On one hand, people argued Louis C.K. has no formal charges or arrests made against him that would prevent him from working and participating in industry events.

The Recording Academy, the body of musicians, producers, recording engineers, and other musical professionals who are responsible for the Grammy Awards, have staunchly maintained that C.K. has every right to remain eligible for, and even win, their awards.

“We won’t restrict the people who can submit their material for consideration," Recording Academy CEO Harvey Mason Jr. said in a statement provided to The Wrap. "We won’t look back at people’s history, we won’t look at their criminal record, we won’t look at anything other than the legality within our rules of, is this recording for this work eligible based on date and other criteria."

His win also very much deflated the continuous overblown cries that cancel culture has gone too far and that a famous man's reputation and career could be ripped apart by the allegations of women. Even when the man in question admits they are all true.

After all, Louis C.K. was back on the stand-up comedy circuit less than a year after the first wave of allegations against him were confirmed.

He did lose a considerable amount of work in the immediate aftermath of the story breaking, but both the industry and the public's ill will against him quickly faded, and by 2020 he was once again selling out comedy venues and firmly back in the entertainment scene. 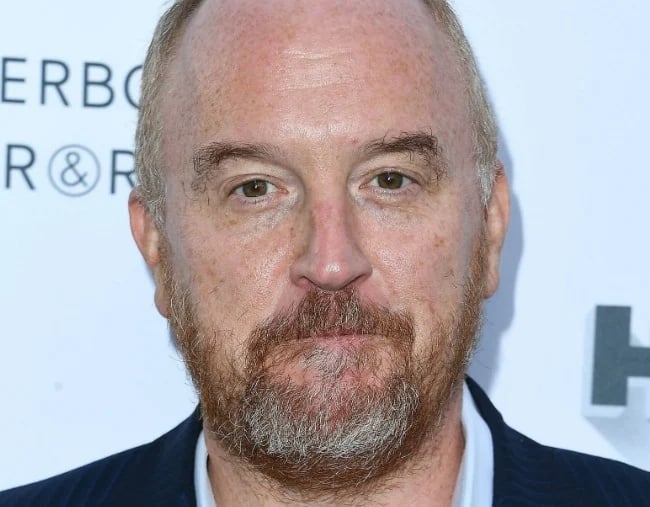 Louis C.K did not attend the Grammys, but his win ignited a firestorm of debate around what it really meant for the man who had been 'canceled' in 2017. Image: Getty.  There's an important conversation to be had right now concerning the fact that we no longer live in a world where artists can be separated from their art.

The goalposts have shifted and we now find ourselves wading into murky new territory where sins, allegations, and crimes are all lumped together in an unregulated spreadsheet we can never hope to properly balance.

Louis C.K. was certainly not the only name who should never have appeared on that winner's list last night, and he definitely won't be the last.

But while the conversation around his win rages on - fuelled by a larger debate around the problematic nature of men still being celebrated in the public eye following misconduct and convictions, and who polices that - there are some important voices that have been forgotten in all the noise.

Namely, the group of women who first came forward with allegations against Louis C.K. in the 2017 The New York Times exposé 'Louis C.K. Is Accused by 5 Women of Sexual Misconduct'.

Women such as Chicago comedy duo Dana Min Goodman and Julia Wolov, who in 2002 thought they had landed their big break when given the chance to perform at the U.S. Comedy Arts Festival in Colorado.

It's a moment that still haunts her to this day, but it was also a job she considered her big break and he was a famed star. She knew that halting production would ultimately be detrimental to her career, so allowed the set to keep running.

And then there is the fifth woman, who spoke on condition of anonymity to The New York Times in order to protect her family’s identity.

She was in her early 20s at the time and felt obliged to go along with his actions, saying: “It was something that I knew was wrong. I think the big piece of why I said yes was because of the culture. He abused his power."

The 2002 Grammys prompted a debate about the rights of Louis C.K. His right to continue his career, and receive industry awards in the wake of these allegations being proven true.

Listen to The Spill to hear how the Grammys really reacted to the Louis C.K. controversy. Post continues after podcast.

They promoted a debate around bodies such as The Recording Academy, and their right to maintain their own rules and hand out statutes based on performance, rather than a public profile.

And in many ways, there was a debate about fans themselves, and the power they hold in the cancellation of celebrities along with their right to either support or turn away from their favourite artists in light of their actions off stage.

But where our thoughts should have turned is towards those five women, who all put their own lives, careers, personal safety, and mental health on the line to speak out against a man in their industry they had long admired. A man who abused his power in a series of sexual misconducts that will be forever seared into the minds of these women.

I can only imagine how they must have felt when word reached their ears that the man who had violated them had just had his name read out from a winner's ballot during one of the entertainment industry's most prestigious events.

All while celebrities and power players sat in the audience and politely clapped.

A situation made all the more damaging thanks to the fact that the Grammy Award-winning album in question contained comedy content based on the impact of the personal stories they had shared.

The mechanics of how entertainers and their industry work and celebrate following cases of misconduct such as this is a conversation that needs to be had.

But it is the victims who deserve the most seats at the table, and the loudest voices in the conversation.

I think that's for each individual to decide for themselves.
Do we now have to know someone's whole life history before we can follow their art?
C
cat 4 months ago

Reply
Upvote
@simple simon I generally agree that the art is seperate from the artist, for example Im not going to stop enjoying Harry Potter cause of JK Rowling's mistakes. But it is a bit different when that artist uses their life in their art & their art to justify their life.

While Louis is literally making jokes about the accusations separation isn't really possible.  Ditto for every film Woody Allen has made about a poor man who is seduced by a sexualised child who is in love with him.... sometimes the art is literally used to facilitate the artist.
C
cat 4 months ago

Reply
Upvote
I don't have a problem with Louis CK being eligible for the award, as the Grammys point out they shouldn't be policing people's history and criminal records (which would only disadvantage black people).

I do have a problem with every person who went to shows where he made jokes about the allegations against him and voted for him to win. The Grammy is just the end point of a much bigger issue where people don't care about sexual harassment.
L
laura__palmer 4 months ago

Reply
Upvote
@cat I have a problem with him being nominated based on his content. It's not very good comedy.
C
cat 4 months ago

Reply
Upvote
1 upvotes
@laura__palmer fair point, I think that goes along with my confusion about why anyone would vote for him.
<
<deleted> 4 months ago