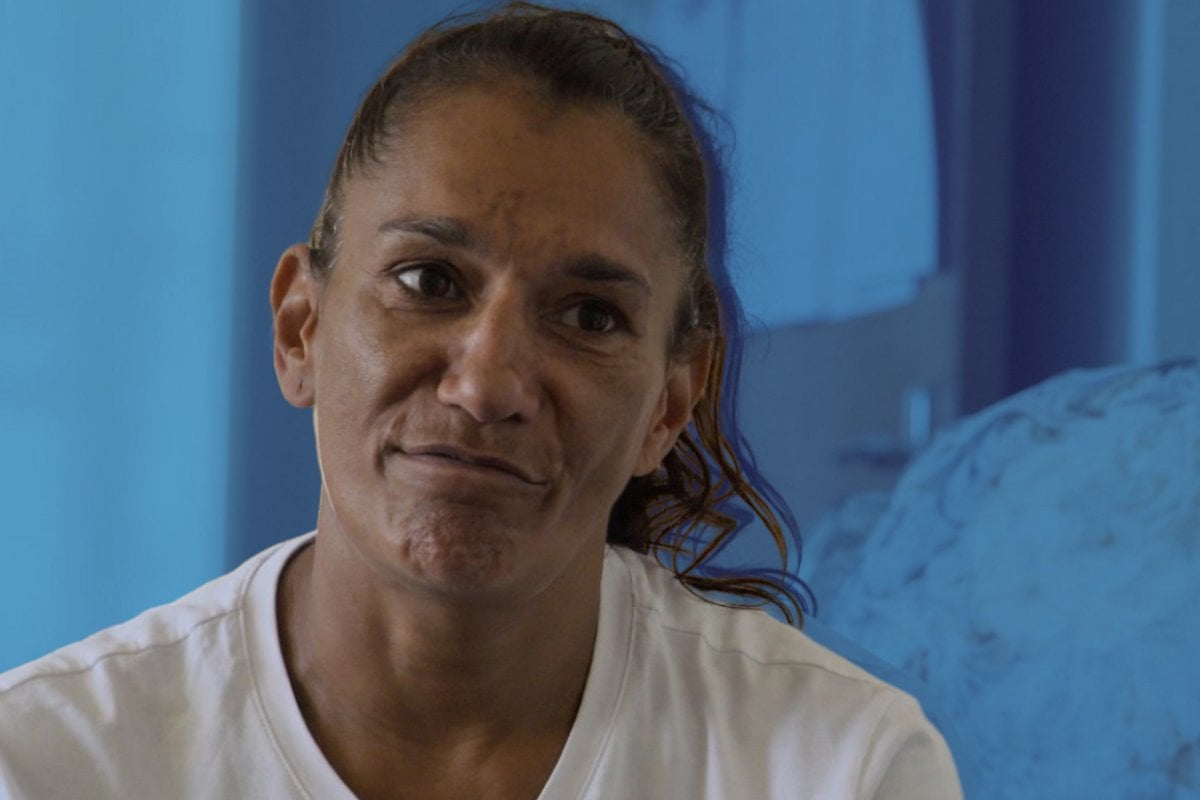 This post deal with domestic violence and may be triggering for some readers.

Shenane never imagined she would be someone who had to live on the dole.

In fact, she used to hear people talking about their struggles living on welfare and think just "go get a job" and move on.

Watch: Shenane takes NSW Greens MP Jenny Leong through a day in her life in the new SBS documentary Could You Survive On the Breadline? Post continues below.

Before applying for the JobSeeker allowance (formerly known as Newstart) in 2016, Shenane's life looked very different to how it does now.

The mother of six was married and working in Aboriginal community development for her local Parramatta council- a six-figure job she loved.

For the most part, her life was following the way she simply thought it would when she was younger.

"I just assumed you get married, have kids and go to work."

But things took a turn after she separated from her husband and "fell into a really bad relationship".

The relationship became abusive and the injuries that Shenane sustained became too hard to "hide" at her workplace.

She eventually made the hard decision to walk away from her job and the life she had built.

"I left work because I was in a high-profile position and I couldn't keep going to work with black eyes. The boss knew something was happening, he could tell."

"I ended up resigning because I didn't want to wreck my work credibility. I've been able to build up a good work reputation because I worked for Wollongong council before and I'd prefer to walk away from it rather than have it go down the drain."

Shenane later relocated to Queensland in 2012 and found work as a disaster recovery officer. She also started dating someone new.

"I removed myself from my kids and my family and it left me isolated," she shared.

Shenane was with her new partner, an army officer, for three and a half years. But he too, was abusive.

Over two years, she ended up in hospital six times after being assaulted.

"It was full throttle," she said of the abuse.

"The last time he hit me, he nearly killed me. The landlord actually found me a few hours later after I had been bashed."

"I acquired a brain injury from it and I had shattered eye socket and my motor neuron was disconnected from my central nervous system. I was lucky to live. Every day is a blessing for me."

While in hospital, a social worker told Shenane about Newstart and for the first time in her life, she became one of the over five million Australians on an income support payment.

She later moved back to NSW to recover from her injuries and be closer to her two younger children who are in care. She also took out an AVO against her ex and was placed in crisis accommodation.

After bouncing around, she eventually moved into public housing in Wollongong and has been living on JobSeeker for over four years.

But Shenane says she hasn't been receiving the payments the whole time, as she tries to pick up part-time work whenever she can.

"As a worker, I've always believed that you should pay into the system to be able to withdraw from it. So for three months of the year I pick up part-time work to make myself feel a bit more sufficient."

These days, she's currently unemployed and receives $550 per fortnight from her JobSeeker allowance. And if she doesn't follow a strict budget each fortnight, she struggles to get by.

Every fortnight $180 is taken out on rent, $60 goes towards paying off a child support debt, $60 goes to court fines, $50 goes to Centrelink and Shenane spends about $50 on electricity. That leaves her with around $180 maximum for food and other expenses.

With such little left in her wallet, she's learnt to make the most of food hampers and only buy goods like meat once a month.

As for her flat, she's managed to furnish her home through Gumtree, Facebook Marketplace and the kindness of other people.

Shenane also tries to put money aside for when she sees her kids once a month. Even if that means going without.

"I have to be really tight with it... But once a month when I meet up with my kids, I try to make sure I have 300 bucks. I don't get to see them often and they're missing out on what I gave my other kids. It usually means I have to go without for a whole fortnight so I can take them out to Flip Out or something."

"I won't lie, it hurts me. Every day after that, I have nothing and it really sucks but there's not much I can do about it."

Shenane's need to budget is something NSW Greens MP Jenny Leong experienced for herself when she lived with her as part of the new SBS documentary, Could You Survive On The Breadline?

For Shenane, having a politician like Jenny experience what living on welfare is really like was a great way to showcase what herself and others currently face.

"It was really good to have someone walk in your shoes and really experience what it's like on a day-to-day basis. Even in public housing and living below the breadline, which is something I really had to adapt to myself," she said.

"It also changed my perception of what politicians are like because Jenny was so down to earth." 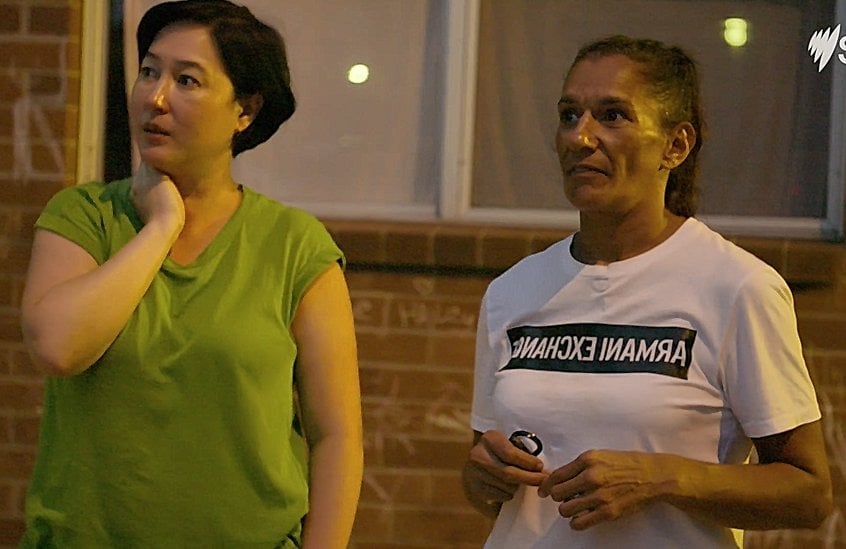 NSW Greens MP Jenny Leong and Shenane in Could You Survive on the Breadline? Image: SBS.

At this stage, Shenane is almost fully recovered from her injuries and is hoping to relocate to Western Australia in the future for work.

In the meantime, she would like to see better support for people who are living on welfare.

"At the end of the day, I don't think that we want heaps more money, it's just more so that we can at least live to the standard."

Being able to afford car registration would also make a world of difference.

"It's something I've found I've struggled with because without a car, I'm not really that employable. And it's sort of a Catch 22 because I don't actually have enough money left over after I pay all my bills.

"I don't have any part-time work so I've tried but it's just too hard to try to save that money."

As Shenane continues to live below the breadline, she wants the public to know just how tough it is to survive day by day on welfare payments.

"It's really hard... It's disheartening in a way. It makes you feel lesser."

Could You Survive on the Breadline? is currently airing one episode per week on SBS. The documentary will also be available to stream on SBS On Demand with subtitles in Simplified Chinese, Arabic, Vietnamese, Traditional Chinese and Korean.

Reply
Upvote
2 upvotes
It's a terrible system and the author has almost glossed over how bad it is. Its the little things. For example, research shows that poor nutrition is linked to poor concentration. This means that poor people are going to underperform at interviews and any employment screening tests. Their skills disintegrate after time and employers discriminate against the long term unemployed. Australia should have, like other countries, an employment guarantee. The unemployed would receive guaranteed work at minimum wage for a minimum of 18 hours a week, complete with super payments. It would still be hard, but there would be more money, a reference, a larger job network, and better job readiness. I know some people think that 'Work for the Dole' schemes are like this, but they often aren't real jobs and don't consider the unemployed person's situation at all.
S
snorks 6 months ago

Reply
Upvote
2 upvotes
@grumpier monster I don't necessarily agree, I lean more towards a basic UBI, but it's certainly something to consider.
E
elishatraill 6 months ago

Reply
Upvote
1 upvotes
@snorks it’s heartening to see a conversation where the underlying cruelty of the current system is acknowledged!
C
cat 6 months ago

Reply
Upvote
@grumpier monster except if you're a single parent, who looks after your kid for those 18 hours? Childcare is going to take your entire unemployment payment. And what use is unpacking boxes if you are looking for jobs that involve your masters degree? A universal income is a much better system that significantly decreases unemployment & allows people to get into jobs that actually suit their skills and experience.
S
snorks 6 months ago