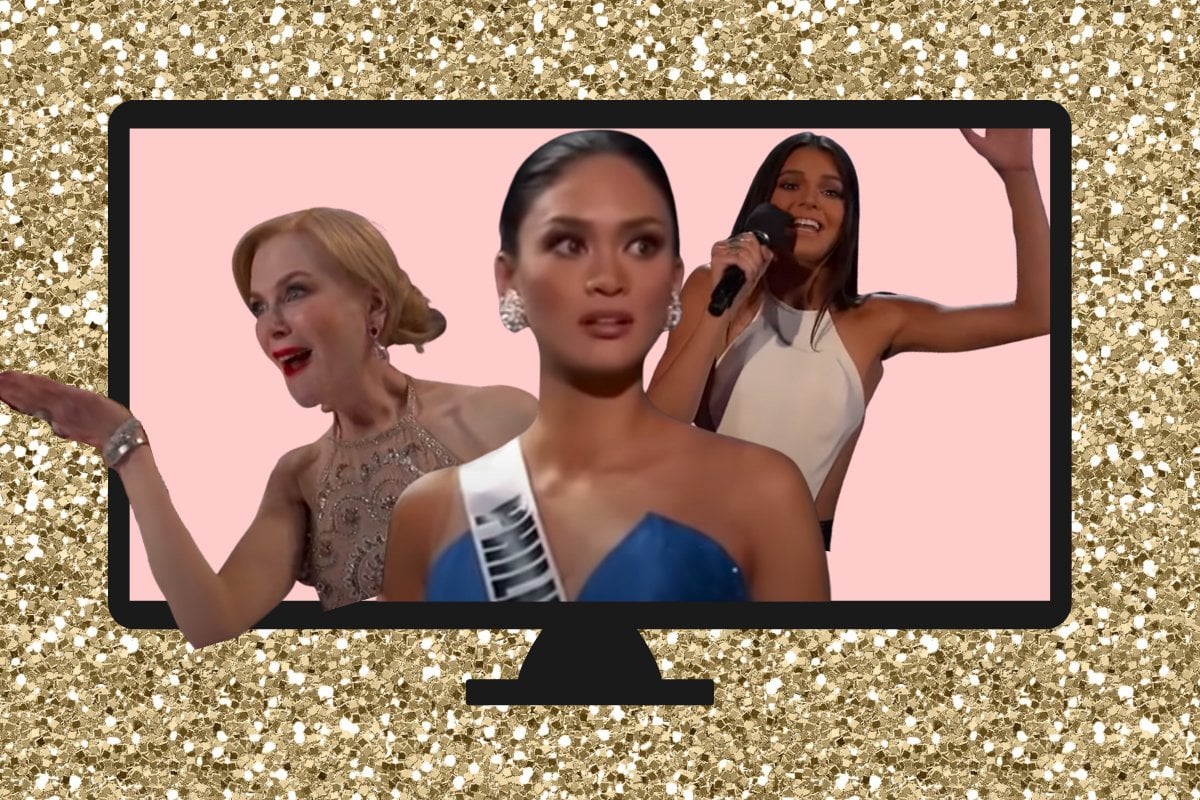 Live television is not for the faint of heart.

Tonnes of cameras, lights, producers, directors, castmates, awards to announce, teleprompters, earpieces. There’s a LOT going on. So it’s no surprise quite a few epic fails have been captured on film.

Listen to the biggest entertainment stories of 2020 with Laura Brodnik and Kee Reece on The Spill. Post continues after podcast.

In a clip that went global but stung particularly sharply in the hearts of all Aussies, was the fateful f**k up of Australia’s Next Top Model.

The 2010 series (yes, it was 10 years ago. Permission to feel ancient, granted) saw the finalists Kelsey Martinovich and Amanda Ware fighting for the top spot. During the live finale, host Sarah Murdoch announces Kelsey as the champion and celebrations and victory speeches ensue.

But then this happens...

That fateful moment when Sarah says, “I don’t know what to say right now. I’m feeling a bit sick about this.”

AREN’T WE ALL, SARAH.

“No. I’m so sorry about this. Oh my god. I don’t know what to say. This is a complete accident. I’m so sorry, it’s Amanda. It was fed to me wrong.”

And at that moment, all of our hearts felt directly through our arses.

If you want that hideous sinking feeling again, you can relive the moment right here:

And if you’re wondering what happened after that monumental stuff up, Foxtel decided to gift Kelsey a consolation prize of $25,000 and a free trip to the USA. Which, to be honest, is the least they could do after ridiculing her live on national television.

The Oscars: The wrong winner.

The two presenters had a bit of a fumble before announcing that the winner of the Academy Award was La La Land - which wasn’t a huge stretch as it had been nominated for this category and already won six other Oscars that night.

So the cast and crew kissed, hugged, cheered and made their way up to the stage. The directory started his thank you speech, shouting out the production company and giving a heartfelt vote of thanks to his wife who was watching proudly in the audience.

Everyone behind him has their sparkly Oscars in their hands, but it’s only when the mic is passed on to another member of the team that things get a little… shifty.

Cast members eyes are darting across from one another. People are shaking their heads and shrugging their shoulders. Academy Award crew are running riot in the back and a dude with a headset shuffles onto the stage.

As Emma Stone whispers in the background, “Oh my god,” another crew member steps forward to say his thanks before concluding it with: “We lost by the way.”

The La La Land director steps up once again and says, “There’s been a mistake. Moonlight, you guys won best picture. This is not a joke. Come up. Moonlight. Best picture.”

Kudos to the La La Land director for being a champ in this moment, as the dude who stuffed up the award announcement in the first place just grimaces sheepishly in the back.

He eventually explains that he was given the wrong card, and on his it read ‘Emma Stone La La Land’ for an award that was previously announced. What a schemozzle.

The Moonlight team then make their way to the stage to accept the award that was rightfully theirs all along.

And yes, of course you can watch the entire thing here.

Kourtney Kardashian on the Today show.

Rewinding to 2016, Sarah Murdoch and David Campbell interviewed Kourtney Kardashian live on air in a cross-stream to Hollywood. It was all going rather well with questions about Kourtney’s fitness regimen and giving birth, but then David asked the star about her sister Kim’s Paris robbery.

In the nicest way possible, of course, but it seemingly hadn't been cleared by her people. And if there's one thing we know about the Kardashians, it's that they take their PR very seriously.

“You should know that the people of Australia and of our show were very empathetic about what happened and very horrified,” David said.

“We were wondering, how is everyone going and how is Kim doing?”

Kourtney responded with “umm...” before looking off camera to someone behind the scenes.

She then blankly stared for far too long until the Today hosts had to awkwardly wrap up the segment.

You can watch the whole debacle, here:

Steve Harvey will go down in history for this mistake. Poor sod.

In the 2015 ceremony, he incorrectly crowned Miss Columbia as Miss Universe, discovering just minutes later he’d made a huge error – Miss Philippines was the true winner.

Both Miss Columbia and Miss Philippines hug and Miss Columbia goes on to be crowned in front of the live audience in the studio as well as at home. There is much waving and cheering until…

“I have to apologise.” He looks at his cue card. We all know what’s about to happen.

“The first runner up is Columbia.”

Daggers from Mis Columbia for Steve making this colossal cock-up. 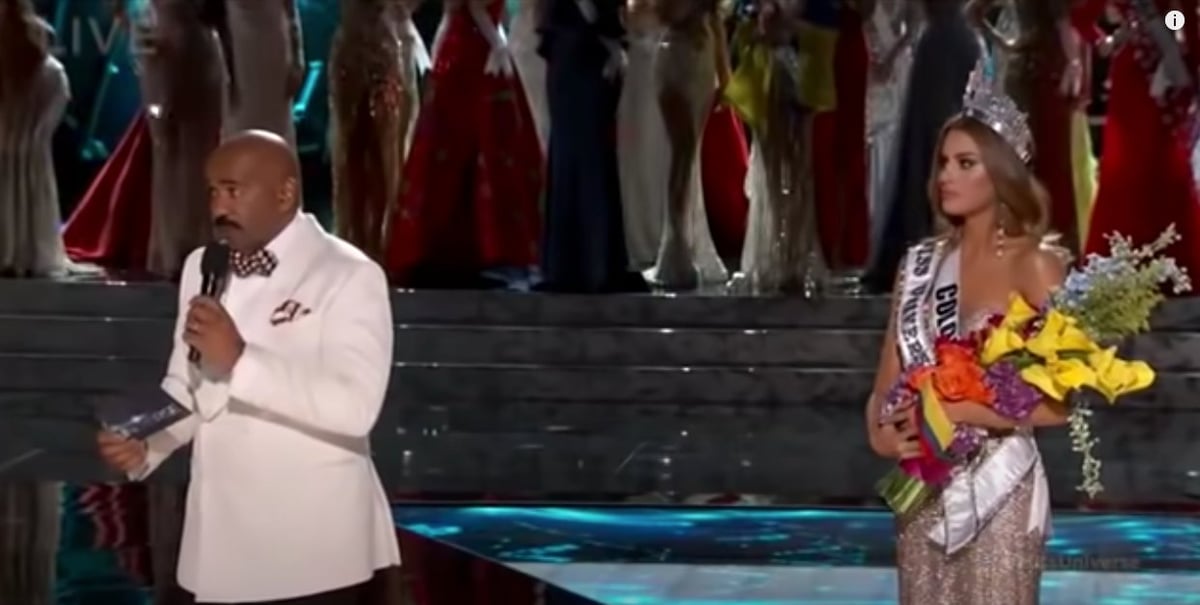 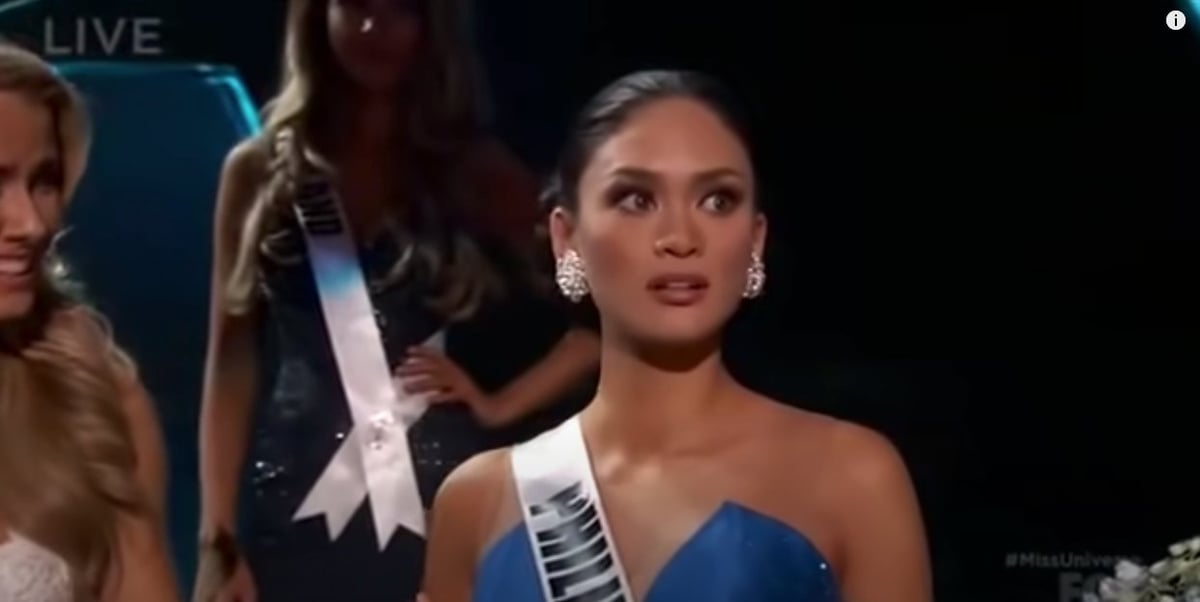 “Miss Universe 2015 is Philippines,” Steve says as the winning music chimes in again. Then the most awkward de-crowning and re-crowning ensues.

You can watch the whole cringeworthy thing, here.

In 2014, John Travolta had the honour of introducing famed theatre performer Idina Menzel to perform “Let It Go” from the hit film Frozen.

However, he didn’t quite nail the execution of her name. In fact, he got it so very wrong we’re honestly baffled how he came up with this pronunciation.

“Please welcome the wickedly talented, one and only, Adele Dazeem.”

Luckily Idina Menzel was a good sport about it all, even getting old mate John back at the Oscars the next year when presenting an award with him.

At the Billboard Music Awards in 2014 (clearly a bad year for live TV screw ups), Kendall Jenner was introducing who we believe to be Five Seconds Of Summer, but completely stuffed it up.

“The band about to rock the Billboard Awards comes from Down Under, but the direction they’re heading is straight up. Recently they made their debut on the Billboard 200 number two this summer. Now we welcome… One… [insert awkward laugh]... guys, I’m the worst reader… umm… [more awkward laughter]... they’re only getting bigger… take a look!”

Do you have a favourite live TV mistake you want to share? Let us know in the comments!