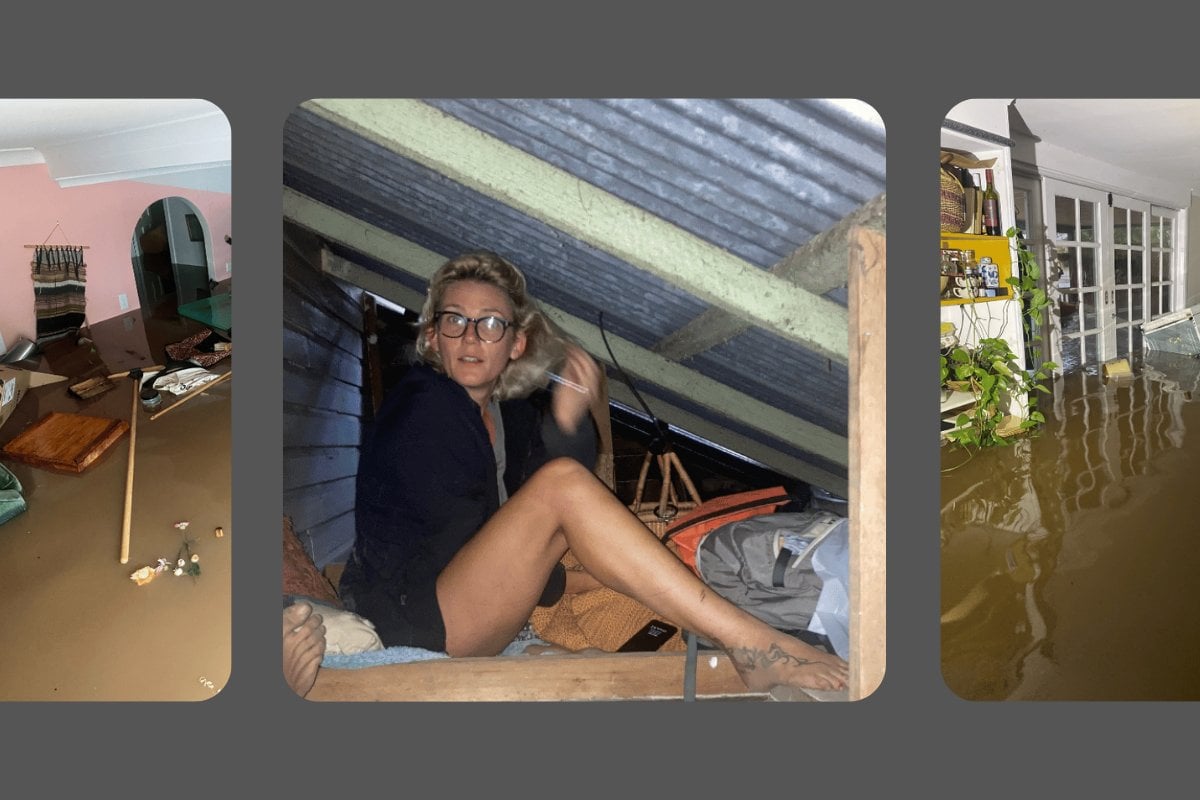 Kate Stroud, a visual artist from South Lismore, is one of thousands who have been directly affected by the floods that have ravaged Australia's east coast.

Last week, Kate and the rest of her town were prepared for flooding. They knew it was coming their way. But what they weren't prepared for was the sheer magnitude of water.

"My partner and I live in South Lismore, and our home's floor level is about 13 metres above the ground. And given the highest level recorded previously was 12 or so metres, [we weren't super worried]. Then the metre estimations starting rising quickly. At one point we were actually told that it could be close to 17 metres. By that time we had to start making some pretty quick decisions for our safety," Kate shared with Mamamia.

Kate and her partner soon realised that their roof cavity was the only safe space in their home.

"We put some food and water into the roof cavity via our manhole, as well as a chainsaw and other power tools in case we had to cut our way out through the roof."

In retrospect, Kate said it was hard to know what to pack.

"I grabbed some things that are quite hilarious in retrospect, like a box of incense. Part of me must have anticipated just how bad the flood smell would be," she said, a small glimpse of hilarity in an otherwise really traumatic experience.

"There was actually one point where we looked out over our front verandah and sadly saw a cow, probably four times my size, wash up to our house and the terror in its eyes actually broke us both down. Given just how high the water was getting, all we could do was push it away. It was very full-on," she said.

As the water began to rise to waist height, things were feeling very intense. These photos taken by Kate show the damage done - and from here, it only rose higher. 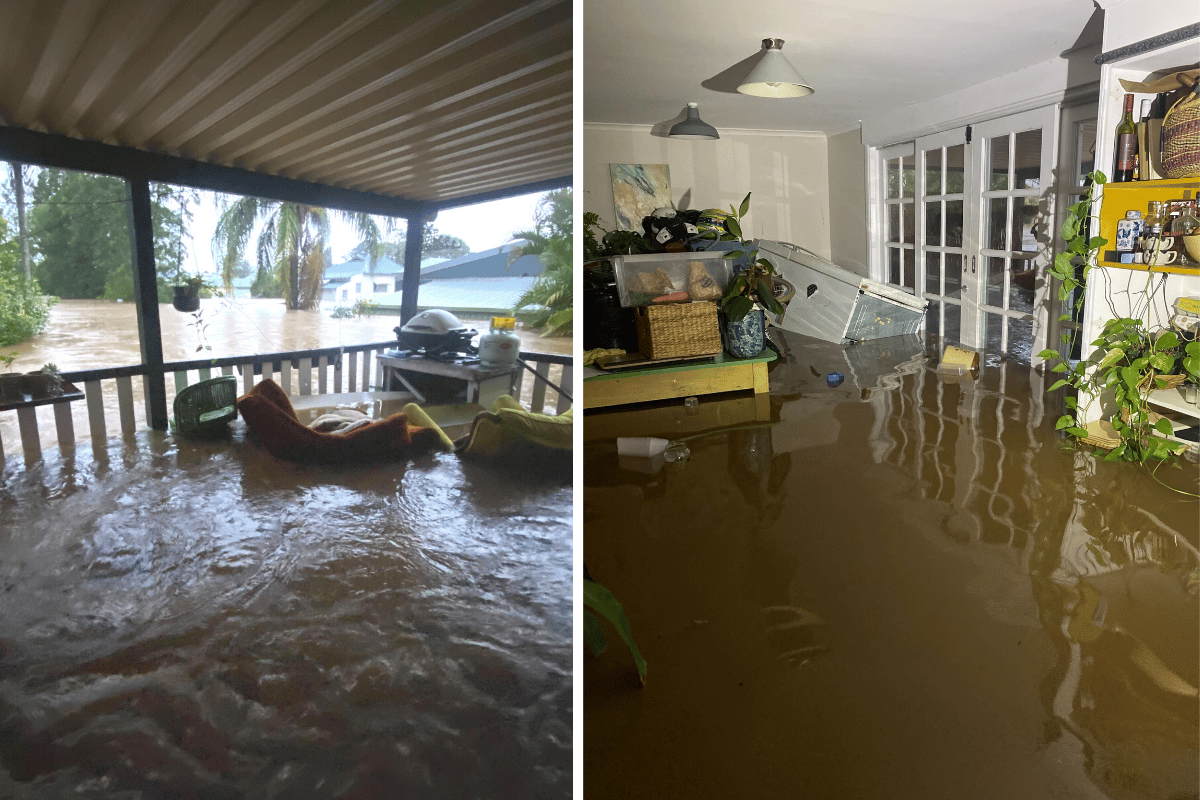 Kate's veranda and home amid the floods. Image: Supplied.

It was at this point that Kate and her partner decided to get up into the roof.

"We had our doona and a couple of other personal items along with the survival stuff. We also still had contact with our neighbours - who have two small children under the age of three - via text, checking up on each other to make sure we were all okay," Kate said to Mamamia.

Kate tried to get in touch with SES, however, they were overwhelmed with calls for help. Her household then got through to Triple Zero and their details were logged.

So in the meantime waiting for assistance, approximately ten other people in the town were attempting to get boats to Kate so they could be evacuated in time.

"Stuck in the roof, I hadn't slept that entire night and it was still bucketing down on our tin roof, which was now very close to my ears. The thought does cross your mind that if this house washes away, we're gonna die. I was becoming delirious." 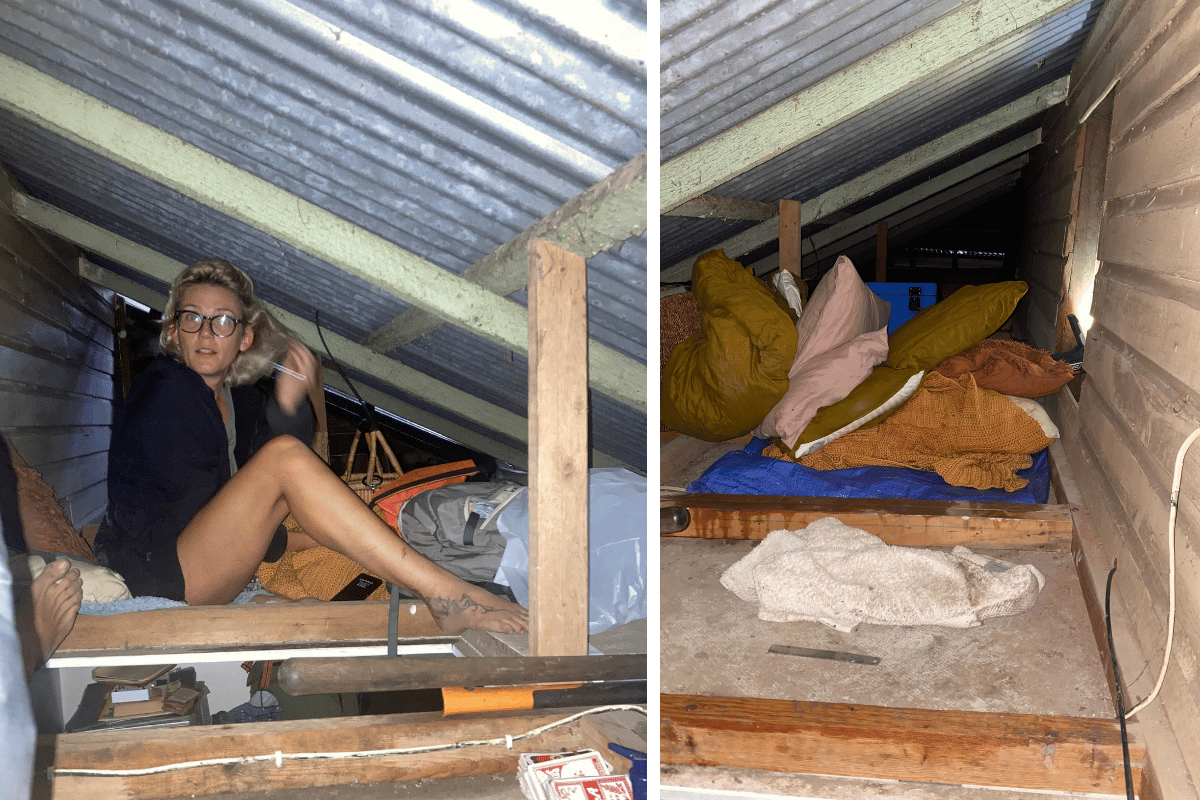 For over six hours, Kate and her partner were stuck in the roof.

Their neighbours, who had been evacuated earlier and given priority because of their small children, were able to flag down a random civilian and ask them to rescue the couple. So with this information, Kate and her partner put their backpacks on containing their valuables, climbed down from the roof, and took refuge on their kitchen sink bench. From here they could alert boats easier, call out for help and wave through the kitchen window.

"The water was freezing, and I was shivering. We just stood on the bench near the window as it was the only kind of safe exit point. And before the rescue boat could arrive, we saw a civilian on a jet-ski appear in our backyard. From the window looking into the backyard, we couldn't see the Hills Hoist or the shed - both were underwater. I banged on the kitchen window as hard as I could and luckily the man spotted me and helped us," Kate recounted.

While all perched on the jet-ski, Kate could finally see what had happened to her town. It was almost completely underwater. They were even having to duck under the power lines, as that's how high the water was.

"It felt like a video game, just so completely unreal. Looking at our town from that perspective, it was next level. I had experienced the 2017 floods, but this was even more shocking. A lot of the community members I've spoken to had a similar experience in that all the emergency services were extremely overwhelmed, so they were instead saved by civilians in tinny boats."

In the week or so since the floodwaters peaked, the aftermath has arguably been just as devastating.

What a sad photo of #Lismore library. From @zanilouise pic.twitter.com/N5741hIgxO

This is Molesworth Street in Lismore yesterday. It’s one of the main streets downtown. The devastation is unfathomable. It is akin to Darwin after Cyclone Tracy and the mayor Steve Krieg says ‘Lismore will die’ without state and federal rescue.

"It's a complete disaster zone. It's hard to comprehend the destruction. The streets at the moment are full-on, piles of everyone's lives just chucked on the side of the street," Kate said. "And the flood mud is everywhere. A lot of us are just operating on survival mode for days in a row. There's levels of grief, anger, disbelief and devastation."

Kate lost her car, her house is severely flood affected and her sign design business which operates from a room beneath her house is also affected. Each day is an evolving situation. 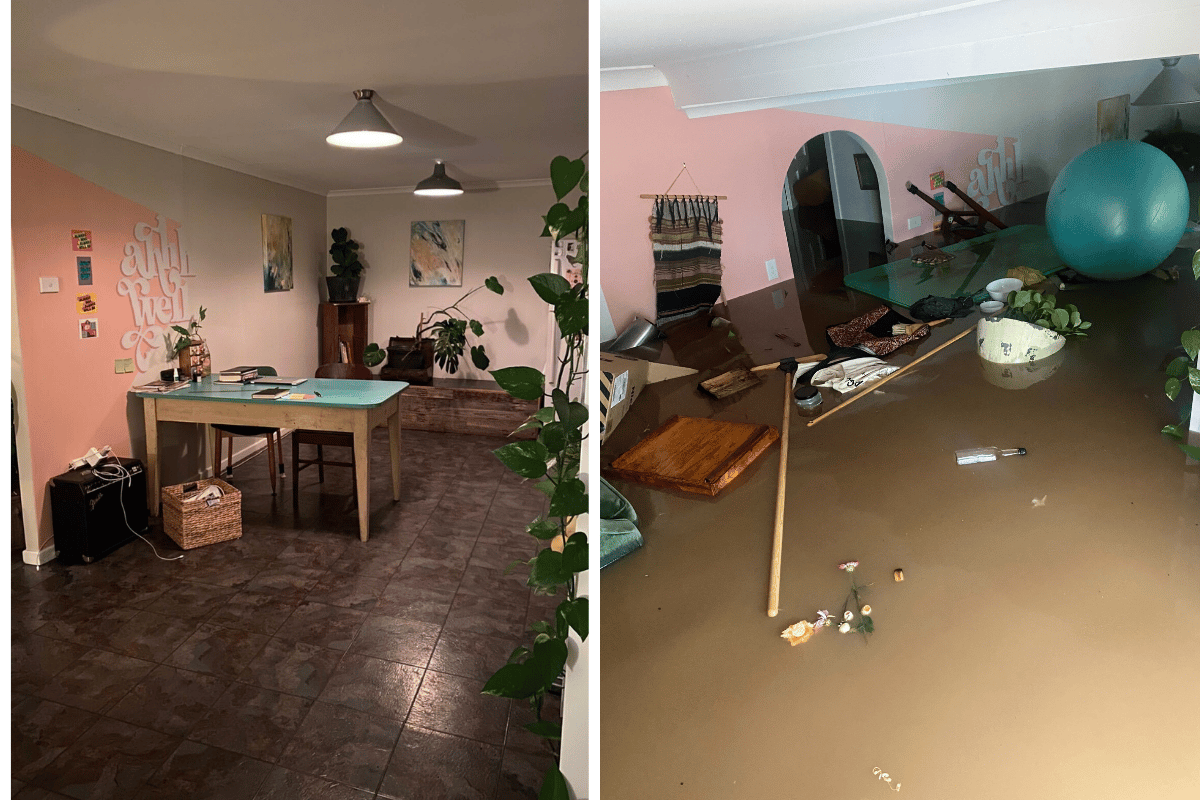 Before and After of Kate's house. Image: Supplied.

So when it was finally announced that the floods crisis had been labelled a national emergency, it was a promising step in the right direction for the community of Lismore.

For Kate herself, it means that she feels more hope in working with insurance companies for assistance now that what she has experienced has been declared a national emergency.

But when Prime Minister Scott Morrison visited Lismore this week, he was met with criticism. A large group of locals went to try and speak to Scott Morrison when he arrived in town, and tensions were running high. Kate was one of those individuals wanting to make her voice heard.

In some ways, many local government politicians have shared their support and helped the clean-up effort, Kate feels. But overall, Kate and lots of Lismore civilians do feel let down by those in power. Especially when it was noted that Scott Morrison had chosen not to speak directly with the community that had shown up to share their stories and frustrations. 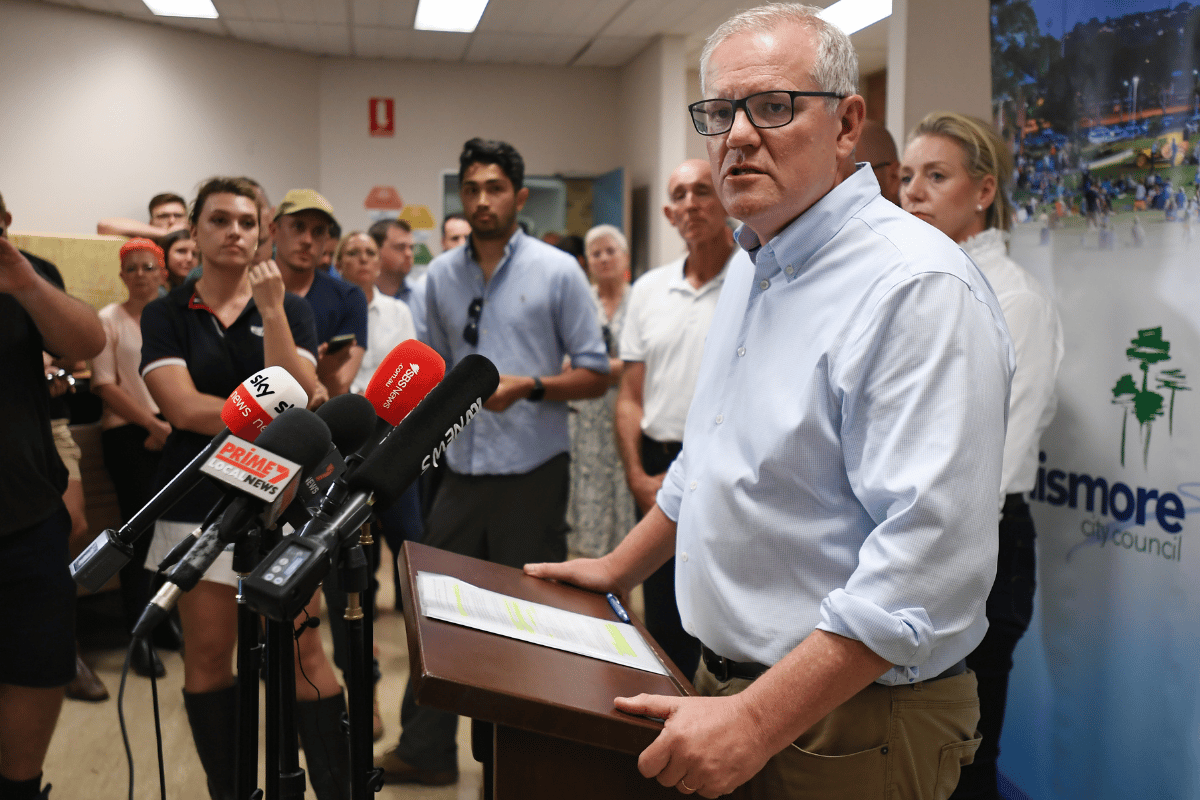 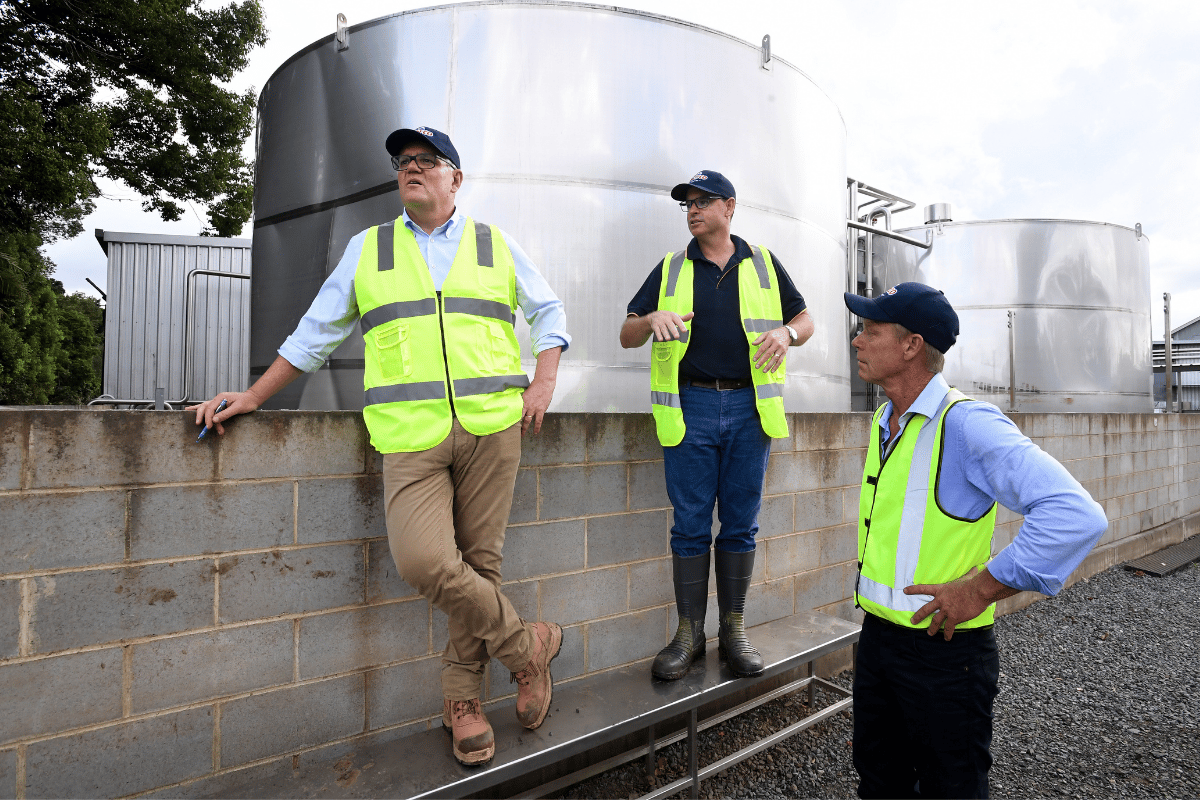 "I actually watched the PM's press conference from outside the building he was talking in (emergency operations centre at Lismore's council chambers). We wanted to show him the real impact, not just a curated window specifically devised for the PM to see. Many of us have lost everything. So, I was quite enraged that our leader was here to do his press tour and wouldn't even show the decency to speak directly to the community that came to speak to him," Kate noted.

"He just slipped in the back door of the building and didn't come out to speak to any locals at all. For me personally, it demonstrated a lack of respect. To have just been brushed aside hurt, and it felt out of touch."

It's hard to have this conversation without bringing up climate change. And as Kate said: "This is not a new realisation, there is a bigger picture to this story. This is what climate change looks like and the consequences of our past are playing out in real time."

As for what comes next for the town of Lismore and the countless surrounding areas that have also been affected, it's all about putting one foot in front of the other. 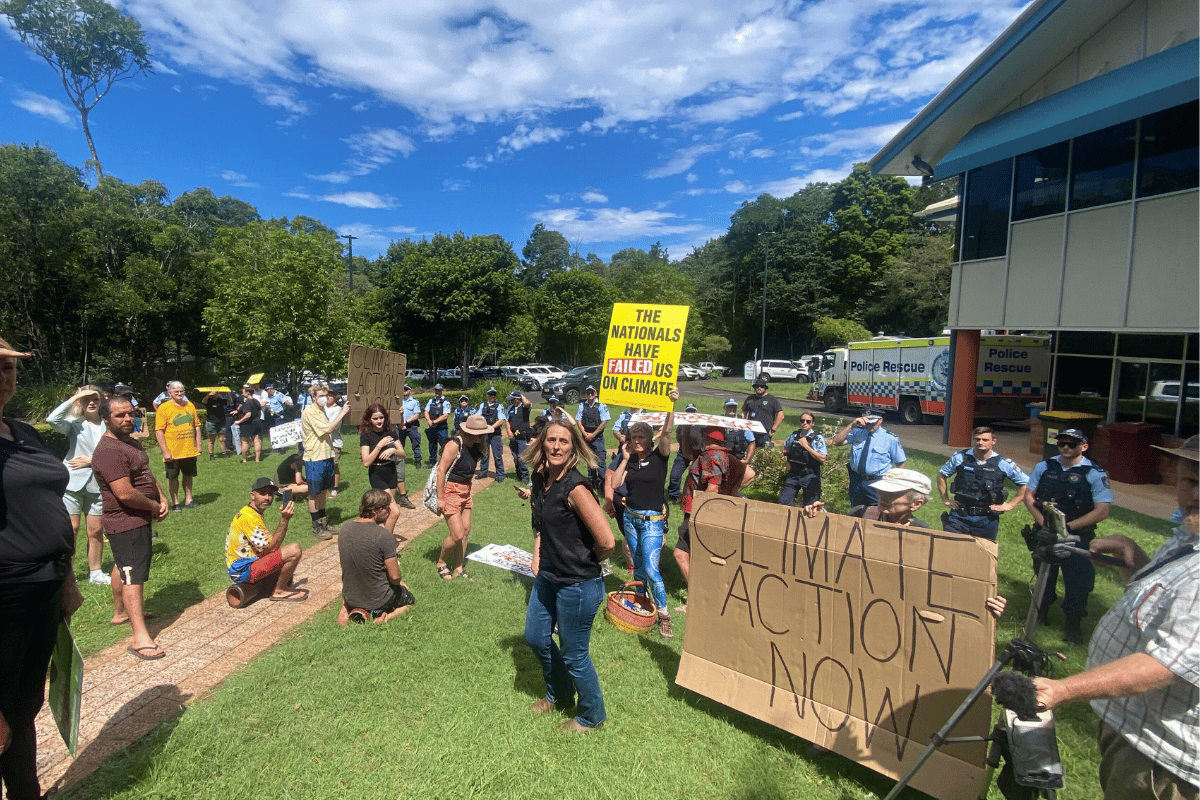 "I think everyone's a little bit in limbo. It's a lot of waiting. Waiting for insurance companies and waiting for people to come and help us plan how to make our homes habitable. Again, we're also super concerned, because this is on the back of the COVID pandemic, where building supplies were already in such short supply before this," Kate shared with Mamamia.

And to rebuild an entire Northern NSW community will take time.

"It's really hard. But the resilience is powerful, seeing the incredible community-led effort and including the amazing work being down by the Koori Mail for the local First Nations people. It's a marathon not a sprint, and there will be immediate, intermediate and long-term impacts. Hopefully people in power remember that."

You can keep up-to-date with Kate's story via her Instagram @stroud_de_signs.

To show your support towards those affected by floods, you can read more here.

Kate's loved ones have also organised a GoFundMe for her and her partner specifically, given they have lost everything. If you would like to contribute, you can here.

Reply
Upvote
1 upvotes
17 metres is simply unbelievable. Terrifying.
Conservative politicians repeatedly describing these floods as unpredictable and '1 in 1000 years' etc., when there was serious flooding last year, has been particularly galling.
C
cat 5 months ago

Reply
Upvote
3 upvotes
@gu3st Scomo using how Australia "is becoming a harder place to live in" as an excuse without the slightest bit of shame or acknowledgement that his government has been actively trying to stop any climate change mitigation for decades is unbelievable.
A
alessandra.z87 5 months ago