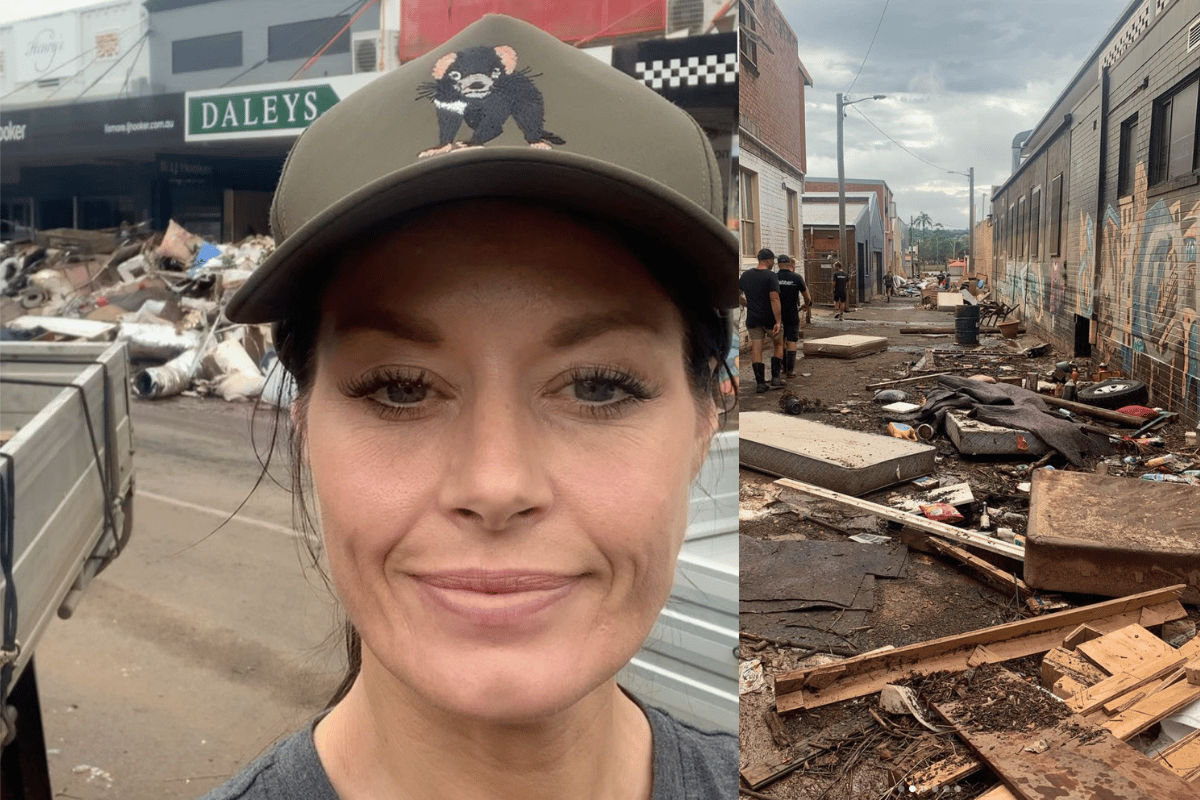 So many in the Northern Rivers community and across the region have been hit by devastating floods.

But it's the aftermath of these floods that is causing just as much devastation. Some people's homes have been swept off hills. Some are still stranded, playing a very long waiting game. And others have begun the clean up, only to realise that it's impossible to fix with the limited resources on hand.

Simply put, it's been a lot for the Northern Rivers and Southeast Queensland. Of course a small silver lining is always the incredible community spirit that is shown in the wake of natural disasters like these, and stories of everyday Aussies doing their bit.

But it also comes with stories of locals struggling to find the help they need, feeling isolated and left to pick up the pieces. Stories of the climate change conversation. And stories about whether the community feels that the government has done enough to support them.

Watch: Many flood victims have 'lost everything' in Northern NSW disaster. Post continues below.

Madeleine West - who lives in the Northern Rivers region - spoke on Mamamia Out Loud this week about the current mood.

"It's completely flooded, big trees have fallen over so we can't get through. We're trying to access some communities around here, which are still stranded and completely cut off. There's lots of helicopters going overhead dropping over care packages but we're just not seeing the coordinated effort that I was expecting. When we started [the clean up] process, there were very few people on the ground and a lot of people wandering around not sure what to do," Madeleine shared.

She also added there's a real feeling of shock and loss among the community. Not to mention Madeleine said she was feeling quite sick given the "thick mud" that is coating everything and is full of "septic sewerage".

"When you look around, you just see houses that have been completely disgorged of all their contents - people's entire lives now lying in the gutter."

Madeleine noted that the areas that have been particularly affected by flooding are lower-socioeconomic areas, adding to the devastation.

"A lot of these people don't have home and contents insurance, as the premium for house insurance in these areas is upward of $25,000 a year. They are just struggling to get by post-COVID.

"I'm just surprised there's not a coordinated response, I expected when we rocked up to help there would be people in big trucks. These are volunteers, so their efforts and resources are limited. We really need a military response up here, the, and at the end of the day the buck stops with Scomo - he has the power to declare this a national disaster and he has not yet," she concluded.

In this episode of Mamamia Out Loud, the hosts talk to Madeleine West about who is on the ground in Lismore and what the clean-up effort looks like. Post continues after audio.

Countless locals and small businesses have also been sharing their experiences via social media, calling for more assistance, more noise and more accountability.

As writer Sophie Hardcastle noted: "This is a climate catastrophe. It's the second 'once in 100-year flood' in five years. I cannot find the words to describe the horrors unfolding here. Ordinary civilians are out here, doing incredible acts."

We've seen footage of dogs being rescued from floodwaters. Civilians who have joined the effort to clean up their towns, supporting their neighbours and helping wherever they can. One woman, named Bianca, shared with Mamamia that she had set up her house as a makeshift evacuation centre, as all her neighbours down the hill had lost their homes and had nowhere to go. There have also been remarkable stories of some elderly residents being evacuated from their homes in the nick of time.

"I am so scared. This flood situation is worse than even my grandmother has seen in her lifetime. I have a newborn baby and all of the roads to access our town are cut off with floodwaters still rising," Bianca said to Mamamia. https://t.co/hZno7A3JkX

Just a few days ago, SES volunteers and police officers were calling out for signs of life in one local town, and they heard "a faint call for help from a home with water up to the eaves of the house". They dove through an open window and found a 93-year-old woman "floating on a mattress, with no more than 20cm of room between the roof and the water level".

As Sophie Hardcastle reiterated: "They're out here setting up pulley systems to ferry supplies across rivers where causeways and bridges have collapsed. They're out here shovelling toxic sewerage mud from the floors of their own houses, chucking it out their windows, then ripping up carpet and chainsawing furniture to get it out onto the street… until there are piles of debris and destroyed belongings as high as the houses themselves. And as soon as these people are done, they're next door, helping to clean out the houses of their friends, and their neighbours and their community: people they've never even met."

Hardcastle continued: "They're out here, giving jerry cans of diesel to their neighbours, because the petrol stations ran out of fuel. They're donating what they do have because the ATMs are out of cash. They're cooking for each other and handing out food on the street because food is running out. But you wouldn't know this, because most of us don't have internet or phone service."

We have also seen the amazing effort of 45 Fijian abattoir workers who only came to Australia three weeks ago and are now stepping up to make a difference.

One of the men, Josua Tawakedrau, said to Pacific Beat radio:

Floods leave behind a massive clean up effort and repair bill but it also damages the people who go through it.
We speak to a young Mum who fought for survival and a @QldFES commander to find out what impact that water leaves behindhttps://t.co/HSfdWwEVhR pic.twitter.com/6r0FdQOxu3

However, among these 'community spirit' stories looms a larger question: could those in power be doing more to help support these regions in the wake of such a major flood crisis?

State and federal leaders have promised more help and financial aid. NSW Premier Dominic Perrottet on Saturday pledged his government would not "spare a dollar" in funding the recovery.

He also this week acknowledged the collective feeling of frustration among Northern NSW locals.

"There's a lot of anger and frustration. We've had many communities up here in isolation and have felt abandoned," the NSW premier told TODAY. Perrottet also said he was "very sorry" if people felt disillusioned by the government's response to the crisis.

On 2GB he said: "It's incredibly devastating. You've got to see it to actually believe it. I'm incredibly sorry, I don't want anyone to ever feel isolated and abandoned." QLD Premier Annastacia Palaszczuk also said it was important to "build back better" to reduce impacts next time, and noted: "Let's face it, it's climate change."

Despite this admittance, locals' frustration towards the government is still brewing over the lack of preparation and planning, given we know these areas are flood-prone.

The fact some of the rescue efforts "were very much left to locals. Facebook pages basically had people going 'can you please come and rescue me'," as Murwillumbah local, Sonia Caeiro, told ABC.

Many flood-affected people are struggling to register for the federal government's one-off $1,000 per adult and $400 per child disaster payment, given the limited internet and phone access - not to mention the red tape.

Local business The Broad Place also noted: "People are lost and missing. Cars destroyed by floods are leaking fuel into sewerage all over the streets. We need help. We are running out of drinking water. Army, defence force, police, where are you? We are on the ground deploying and organising it ourselves. It's a wide-spanning region, we can only cover so much and everyone is brave, but also exhausted."

Seventeen Australians have lost their lives in the floods across NSW and Queensland so far. And thousands of homes have been damaged or destroyed.

So with all of this in mind, what can us everyday people watching on do to help? We can donate money to relevant organisations and charities and continue to spread the word to make sure people in flood-affected areas continue to get the support and attention required.

Because goodness knows, they need it.

Listen to The Quicky: Life in a flood zone. Post continues after audio.

A GoFundMe Bundjalung Community Flood Relief by Koori Mail has been organised. You can donate here.

A GoFundMe Lismore Floods Fundraiser for the queer community has been organised. You can donate here.

Another GoFundMe Tropical Fruits Floods Fundraiser for the community has also been organised. You can donate here.

GIVIT has partnered with the Queensland and NSW government to manage donated goods, services, volunteering and funds to help locals access exactly what they need right now. You can find a list of items you can donate towards on their  website.

The Salvation Army is running an appeal to raise funds for residents in both NSW and Queensland. Donations can help provide food, clothing, toiletries, bedding, furniture, school supplies to those affected and help with the recovery effort ahead. You can donate to the Salvos here.

Madeleine noted that the areas that have been particularly affected by flooding are lower-socioeconomic areas, adding to the devastation.

Lots of very well-heeled celebrities and the like have bought real estate in those communities - it would be nice to see them giving back to their neighbours.
C
cat 5 months ago