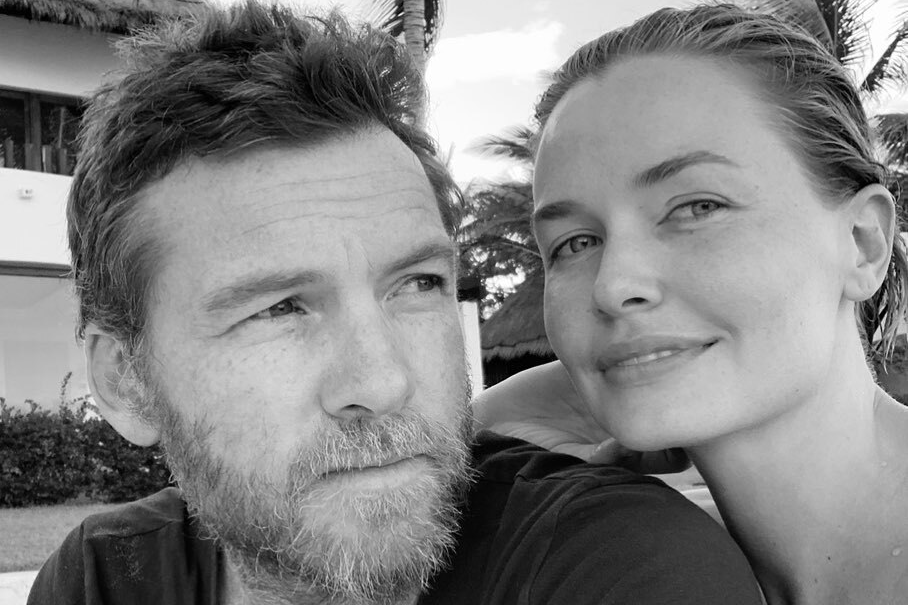 In 2006, Lara Bingle became a household name. For years, she lived a highly-publicised life on the Australian socialite scene and was a regular feature in the tabloid pages.

Fourteen years later, the former model has managed to give birth to her third child without anyone noticing.

On Tuesday, photos emerged of Bingle and her husband, Sam Worthington, with their two children and another in a pram, thus confirming she has given birth.

In November, the 32-year-old revealed she was pregnant while visiting Sydney for the opening of a Louis Vuitton store.

Despite the recent photos surfacing online, the extremely private couple are yet to officially announce the birth of their third child.

When Lara was just 18 years old, she was splashed on every television screen across the country in Tourism Australia’s controversial advertisement, as she stood in a bikini on a deserted beach saying “Where the bloody hell are ya?”.

The advertisement was banned in the United Kingdom for being inappropriate.

Previous to her screen debut, she attended school in Sydney's Potts Point, before dropping out at 16 to move to Italy to pursue modelling. Following her return to Australia she was clouded by controversy, as she was thrust into the spotlight in her late teens and early twenties.

After the controversial advertisement, in March 2008, it was announced that Lara was engaged to marry Australian cricketer Michael Clarke.

Two months later, Lara's father died from bowel cancer. She became an ambassador for Bowel Cancer Australia, and continues to advocate for the organisation.

Two years after the engagement was first announced, Clarke's public relations team revealed the engagement had been called off, and there were unconfirmed rumours that she had flushed the $200,000 engagement ring down the toilet.

After her break up with Clarke, Lara had a string of high-profile relationships and affairs.

In 2010, Lara started proceedings to sue footballer Brendan Fevola, who she reportedly dated whilst he was married to Alex Fevola, for breach of privacy, defamation and misuse of her image for the release of a nude photo of her in the shower published in Woman’s Day. It later emerged that she and her agent Max Markson had sold her ‘nude photo’ story to the same magazine, which had originally published the controversial photo for nearly $200,000.

Later, in 2011, photos of the television personality on holiday with rugby player Danny Cipriani were splashed across magazines, rumoured to have been organised by Lara herself. She was dumped while the magazines were still on the shelves.

She went on to date fashion designer Gareth Moody in 2013, who she problematically boasted helped her lose 12kg in an interview with WHO Magazine, just months before moving to New York City with her now husband Sam Worthington.

Relationships aside, Lara had been in the public eye in her own right. In 2008, she became the host for Channel Nine's show Holidays for Sale, and started contracts with Vodafone and Speedo.

In 2011, she was on Dancing with the Stars for three weeks, before being booted for not having the "X-factor". Then, in 2012, Lara appeared in one season of a reality television show, Being Lara Bingle, based on her life in Bondi. Australia witnessed the fabulous life of the model, but the show was cancelled after one season on the back of mixed reviews.

Later that year, Lara was fined $3500 for driving without a license and fleeing the scene of a traffic incident.

She appeared by all means to have hit rock bottom.

Between 2013 and 2014, Lara co-designed a line of bikinis for Cotton On. Then, in November 2014, the model released her own line of premium fake tan called The Base.

Her past became background noise, as she built a brand that is unshakably successful.

In 2014, she secretly married Worthington, and changed her Instagram name to Lara Worthington. Six years later, the 32-year-old shares three children with her husband, Rocket, four, and Racer, two, and their newest addition, who they are yet to reveal the name of. They live by all account a very 'normal' life.

Speaking to Stellar Magazine last year, Lara said she has learnt the importance of the people you surround yourself with.

"I’ve been through so many phases in my life and I’ve learnt that the people you surround yourself with are so important," she said.

"Good people are my go-to. I’ve learnt that trusting people is imperative. I really value their opinions and take it all on board, and then develop my own thoughts and feelings."

She added that her husband Sam is her anchor, and he helps her to feel calm.

"I don’t have to put on any façade with him, and moving to America has meant we’re able to live a really normal life. In fact, he’s more normal than me. He’s the guy from Perth who drinks milk before he goes to bed!" she told Stellar.

Lara has rebuilt herself in an admirable way, and put the mistakes of her much younger self behind her.

In 2020, she is miles from the woman standing on a white sandy beach, asking us where the hell we were.

She didn't utter the phrase in an ocker accent like you've written above; she asked it in a properly enunciated way which sounded rather absurd: "Where the bloody hell are you?" It was hilariously cringe-worthy. Looks like she's living the good life despite her dodgy choices from the past - good on ya Lara!