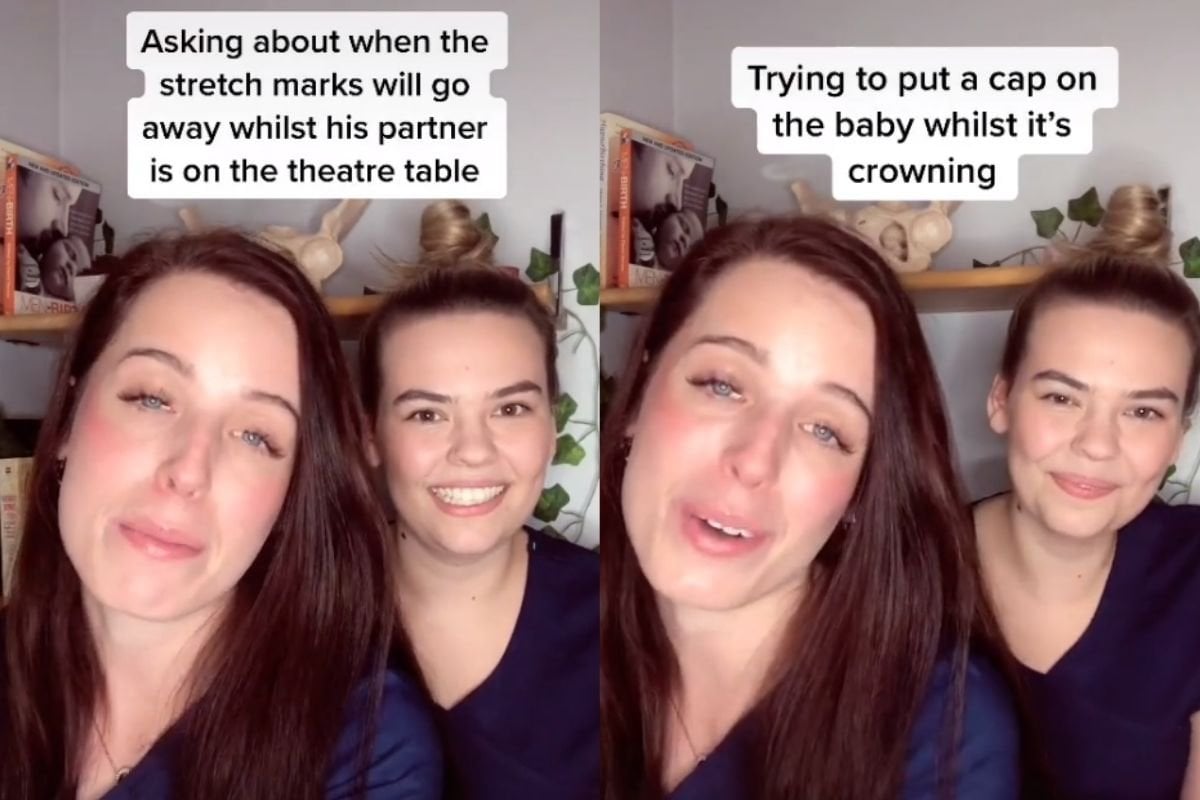 If you're one of those whimsical creatures who has experienced birthing a human, you'll probably tell us it ain't a walk in the park. Because more often than not, the whole labour thing is a little... intense.

And you know the last thing one needs when going through labour? An annoying partner. Someone who is getting around the delivery room doing/saying approximately all the wrong things.

And while you'd hope it wouldn't be a common thing that happens - a viral TikTok clip has confirmed that yes, there is in fact an ABUNDANCE of inappropriate behaviour going on in the delivery room.

Watch: Have you listened to Mamamia's podcast The Delivery Room, yet? Check out the trailer below.

The popular post was shared by Australian midwife Tylah Jane and her midwife friend (cute!), which detailed some of the absolute WORST behaviour they've come across.

"It's when he misses the birth to validate the parking ticket for me," the first midwife said in the clip.

Her friend then adds, "It's when he scrolls through his phone the whole time during labour for me."

Our personal favourite? "Trying to put a cap on the baby while it's crowning.."

Listen: Burning flesh and VBACs: The realities of a planned c-section. Post continues below.

The midwives continued to call out some of their biggest pet peeves throughout the clip, from partners asking when the stretch marks will go away, to doing a poo in the hospital toilet... with the door open.

One of the midwives said one man even slipped off to the pub during labour ¯\_(ツ)_/¯, while another asked if his wife's vagina would "go back to normal" while it was being sutured.

Check out the whole clip below:

We asked a bunch of midwives to tell us some more of the worst behaviour they've seen from partners in the delivery room.

Here's what they said:

Saying they're tired while their wife is in labour.

"The partners who complain about how tired they are! Never goes down well." - Jenny.

Going in between two delivery rooms.

"The time I had a dad going between his wife AND his girlfriend’s birthing room! Yep - true story." - Jenny.

Eating food that's... not meant for them.

"I’m a midwife and RN. When I had my first son I was in labour overnight. When my breakfast arrived in the morning (I wasn’t able to eat it), I looked up and here was my husband sitting up on the recliner chair eating bacon and eggs watching The Today Show saying ‘You don’t mind, I might as well eat this babe?’" - Andrea.

"Dads often have no idea there [are] more than two holes down there. They really don’t know vaginas!" - Jenny.

Asking for their mum to be in the room.

"Some [partners] have wanted their mother - the mother-in-law - to come into the delivery room. I always try to advocate and avoid that one (except if the woman genuinely wants this). Some just don’t understand that you don’t want your MIL seeing your bits, etc." - Andrea.

Getting naked in the birth pool.

"My midwife explained the birth pool process to us and then reminded us that clothes for dad whilst in the pool were a must. We sort of nodded and said, "Well, yeah" and she said she'd had a partner naked in there while the woman was birthing." - Jem.

"Our midwife told us the same thing at our birthing class. She said that none of the nurses need to see a naked man and if dad wanted to be in the pool, he needed to bring some boardies with him to the hospital." - Kate.

"I walked in on a dad with his mouth over the entenox (happy gas) outlet on the wall, having a wonderful time." - Amy.

Getting naked in front of staff.

"I found a dad “helping” his partner in the shower, but forgot to leave his pants on. Not really bad behaviour but certainly not considerate of the poor midwives who copped an eyeful of things we just aren’t prepared to see in our job! Vaginas, breasts and baby penises - fine, but grown man bits… NO THANKS." - Amy.

Thinking his wife's cold flannel was for him.

"This is my husband's cousin's story, but when she was birthing, the midwife came in with a flannel for her head and her husband misinterpreted it, took it and said, “Thank you. Didn’t think anyone was thinking of me”, before he proceeded to place it on his head and lie back. His mother-in-law gave him a swift backhand to the head!"

"The biggest fainters are often the biggest blokes. We always had a chair ready for them to hopefully fall into - it’s such a pain when you have to call for help when a partner is sprawled out on the floor." - Andrea.

Reply
Upvote
'The biggest fainters are often the biggest blokes' - I feel personally attacked by this :)
I'm a big guy, when my wife had to go into the operating room they made it clear I had to sit down if I wanted to be in there with her.
I wasn't going to faint, but I get why they didn't want to take the chance.

Reply
Upvote
@snorks parking you on a seat also means you are less likely to get in the way of the surgical team.

Reply
Upvote
I let my then partner get a massage at nearby shops while I was induced and lying around then the contractions came on fast and bub was on his way. They used my phone to call him but he had the same name as our building supervisor so he got the call wondering what the nurse was talking about.Luckily my ex was actually just parking and walked in literally as baby came out.
News
General
Opinion
True Crime
Politics
Sport
Explainer
Entertainment
Celebrity
Reality TV
Movies
TV
Books
Rogue
Royal
Lifestyle
Beauty
Fashion
Weddings
Home
Wellness
Health
Fitness
Travel
Food
Parents
Before The Bump
Pregnancy
Baby
Kids
Teens
School
Parent Opinion
Work & Money
Money
Finance
Career
Lady Startup
Relationships
Sex
Dating
Separation
Friendship
Family
Real Life
Couples