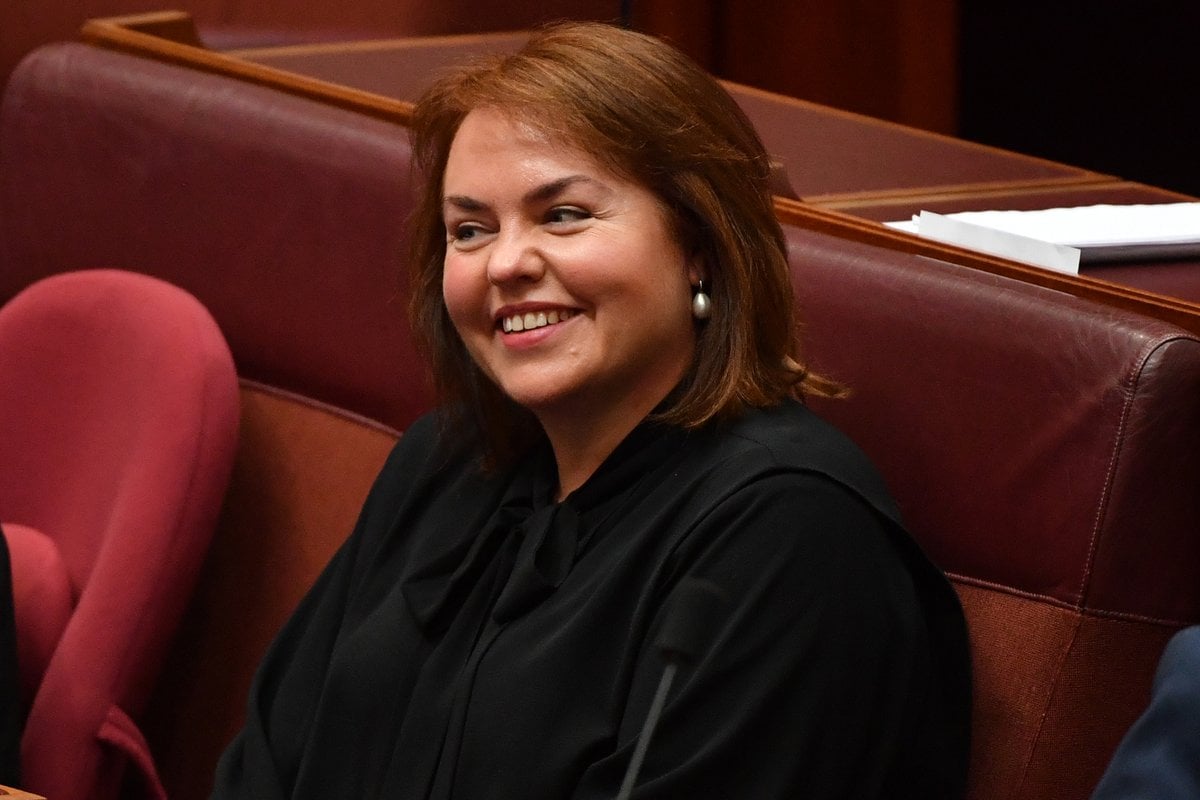 Earlier this month, news broke that Victorian Labor senator Kimberley Kitching had died suddenly at the age of 52.

"The Labor family is in shock tonight at the tragic news that our friend and colleague Senator Kimberley Kitching has died suddenly in Melbourne," Labor leader Anthony Albanese said at the time.

In the days since, a string of allegations have come to light claiming Kitching - who died from a suspected heart attack - was bullied and ostracised by senior female members of the Labor party.

Reports also emerged that Kitching allegedly raised her bullying before her death on Thursday, March 10.

On Monday, while farewelling his wife at a funeral service at Melbourne's St Patrick's Cathedral, Kitching's husband, Andrew Landeryou, further shed light on the "unpleasantness " his wife experienced in parliament.

"They know what they saw with their own eyes," he said during the eulogy.

"Of course there’s a lot I could say about the unpleasantness of a cantankerous cabal, not all of them in parliament, that was aimed at Kimba.

"I hope it’s sufficient to say she deserved so much better. Her friends and ferociously loyal staff are angry about how she was treated. The intensity of it did baffle and hurt her."

With questions remaining about Kitching's treatment in parliament, here's what those involved have said.

What are the bullying accusations?

An article by The Australian reported on claims the 52-year-old was bullied and ostracised by senior female members of her party, including Senators Penny Wong, Katy Gallagher and Kristina Keneally.

The ABC have also reported that Kitching told a parliament-employed workplace trainer she was being bullied by colleagues, before her death.

A number of her employees reportedly told the publication she raised the bullying when she was undergoing workplace education on November 5 last year, telling colleagues she allegedly asked the trainer, "What are you going to do about the fact that I am being bullied?"

However, according to the publication, it's not known whether she made any formal steps towards an official complaint.

Listen: The Mamamia Out Loud team discuss the problem with the mean girls narrative. Post continues below.

What have Penny Wong, Kristina Keneally and Katy Gallagher said?

In the statement, the senators explained they initially declined to comment on the allegations "out of respect" for Kitching and her family.

"Given the hurtful statements that continue to be made we feel it necessary to respond," they said.

"The allegations of bullying are untrue. Other assertions which have been made are similarly inaccurate."

Penny Wong, Kristina Keneally & Katy Gallagher statement on Kimberley Kitching: "Given the hurtful statements that continue to be made we feel it necessary to respond. The allegations of bullying are untrue. Other assertions which have been made are similarly inaccurate." pic.twitter.com/bon7ljmlE1

Senator Wong also responded to reports about an alleged comment made towards Senator Kitching during a meeting in 2019.

According to the ABC, Wong reportedly told Kitching "Well, if you had children, you might understand why there is a climate emergency", during a debate about school children engaging in "civil disobedience" at climate protests.

In the statement, Wong said she apologised to Kitching, which she understood was "accepted" when the comments were first reported.

"After these matters were publicly reported, more than two years ago, Senator Wong discussed the matter with Senator Kitching and apologised," the statement read.

"Senator Wong understood that apology was accepted. The comments that have been reported do not reflect Senator Wong's views, as those who know her would understand, and she deeply regrets pain these reports have caused."

All three senators confirmed they are attending Kitching's funeral on Monday.

What have Labor leaders said?

Last week, Labor leader Anthony Albanese hit back at the use of the term "mean girls" to describe the three Labor senators, saying it's "extraordinarily disrespectful".

"I find it astonishing that in 2022, I get a question using the term ‘mean girls’," he told reporters on Wednesday.

"I find that extraordinarily disrespectful to describe strong, articulate, principled women like Penny Wong, Katy Gallagher and Kristina Keneally. I find it astonishing and a throwback. Decades. Decades."

Albanese later said Kitching never raised complaints of bullying with him and labelled political debate about her death "not constructive".

"That is just a fact," he said, according to AAP.

"The idea that we politicise the tragedy of someone's death is, in my view, not constructive."

Deputy Labour leader Richard Marles has also responded to the claims, telling reporters he did not accept "assertions that have been in the media" about the way Kitching was treated.

"The whole Labor movement is a state of grief and shock. Right now, I am focused on providing support to Andrew, her husband, and her family, whose grief is unspeakable," he said on Thursday.

He also said the party's internal culture would be examined, saying, "questions of culture are something which is assessed in an ongoing way within Labor."

"The Labor Party and Anthony Albanese in particular has been very quick to throw stones, very quick to make accusations," he told Brisbane radio station 4BC.

"It is up to (Anthony Albanese) to address these things and take them seriously at the moment."

Amid the allegations, former Labor MP Emma Husar, who left Parliament in 2019, has come forward to claim the stress of being "bullied by powerbrokers" caused her to develop a heart condition.

"I developed a leaky mitral valve condition in my heart and had to see a cardiologist," she told The Daily Telegraph.

Husar also hit back at Albanese's outrage over the term "mean girls", saying it was a form of gaslighting.

"A woman lost her life and there were circumstances that point to the Labor Party, but what Albo is doing here (by turning the phrase around) is absolute gaslighting," she told the publication.

"This is the phrase Kimberley Kitching used to describe her [alleged] bullies. If this was on a different sort of work site where would the ALP, which says it is the party of workers, be then?"

"We both had a right to be safe in our workplaces and we were not. It's disgraceful."

Reply
Upvote
1 upvotes
A very sad event, apparently she had a thyroid disorder and the medication can be a problem to the heart. Absolutely people have the right to be safe in their workplaces but politics is a tough game. I am not surprised some may not have trusted her when one of her best friends was Pauline H. When her husband said he should have protected her more, you can understand how he feels but he couldn’t as it was her workplace, we can’t have husbands running in to sort things out for us. Do you think Margaret Thatchers hubby spoke for her, I think NOT. Sexual harassment definitely needs to be stamped out but you will never
stamp out differences of opinion.
L
lydia 5 months ago

Reply
Upvote
@mumma-cat  Very sad indeed for one so young. I think people have to be careful not to be looking for someone to blame, that is equally as unfair as any other wrong behaviour. I have to say Penny Wong’s comment is actually right and fairly harmless. I actually say similar regarding my neighbours (and I like them) they fuss and it is because they don’t have children and consequently grandchildren and have a different view on priorities. They haven’t a weed insight,  they live to weed,  I swear. I’m too busy providing for off spring, takes me all my time to water. I worry about the future, climate changes etc all the things Penny said. She is right, you see things differently when you are rearing future generations. It is grossly unfair to blow a simple comment out of all proportions. The senator’s friends are grieving and understandably so but people have to be fair, no one has a crystal ball to know something terrible is going to befall a person, we would never say anything living like that.
<
<deleted> 5 months ago

Reply
Upvote
4 upvotes
Each way Albo is very weak, feckless individual. He is the first person to bark at the LNP for any long-bow he can draw relating to female MPs....but look what happens under his watch. Nothing. Nothing but gas-lighting those who complain from his own side. We know who the 'mean girls are'. The press knows and the public knows. They are the reason why Labor loses elections and will lose this time around now as well.
M
mumma-cat 5 months ago

Reply
Upvote
1 upvotes
@mumma-cat Albo comes across as a decent enough person, but I am sceptical that anyone who reaches a party leadership, doesn't share some of those less desirable qualities you seem to equate with the opposition.
M
mumma-cat 5 months ago

Reply
Upvote
2 upvotes
@guest2 Morrison takes nasty to a whole new level the way he has treated refugees is disgraceful and women in his party also Brittany, no, I honestly can’t recall another  PM like him, not kind or sincere at all. Albo strikes me as a much more honest and genuine soul.
A
anonymous 5 months ago