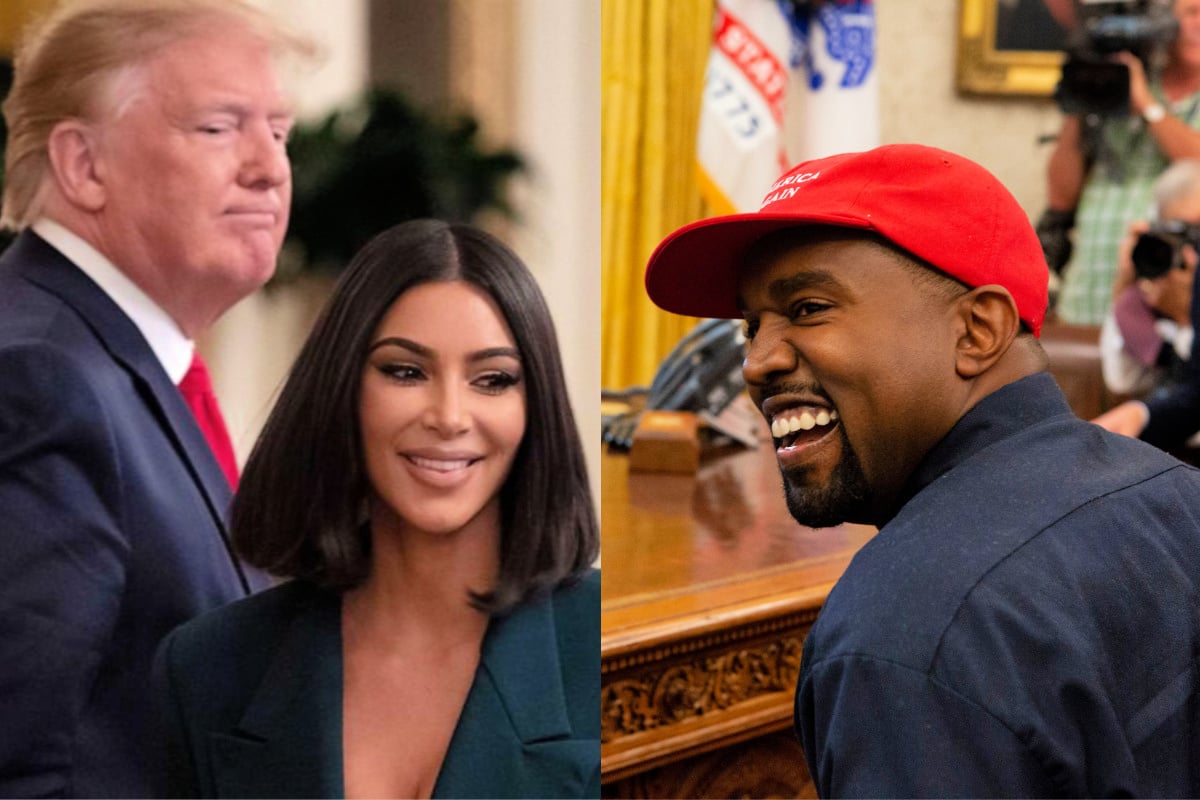 When Kanye West took a highly-publicised trip to the White House in 2018, wearing a red Make America Great Again cap and praising Trump as a "genius", people truly started to wonder if he was OK.

The award-winning rapper built his career on being a 'conscious rapper', only to make headlines for his close relationship with US president Donald Trump — a president who has actively fought to deny a number of minorities their rights.

This, from the same man who looked directly into the camera and said "George W. Bush doesn’t care about black people" during a live benefit telethon for Hurricane Katrina back in 2005.

WATCH: You can watch the trailer for Kim Kardashian's The Justice Project documentary below. Post continues after video.

"Just as a musician, African-American guy out in Hollywood... everyone around me tried to pick my candidate for me. And then told me every time I said 'I like Trump' that I couldn't say it out loud or my career would be over, I'd get kicked out of the black community — because blacks, we're supposed to have a monolithic thought... we can only be Democrats," he said.

Earlier that year, Kim Kardashian West stood behind the president's Resolute desk in the Oval Office to pose for a photo. Next to her sat Trump, beaming with an ear-to-ear grin.

"Great meeting with @KimKardashian today, talked about prison reform and sentencing," he tweeted following their encounter.

Kim's name was also swiftly dragged through the metaphorical mud. She and Kanye were already the world's most polarising high-profile couple. But their friendship with Trump? It just didn't make sense.

But what if that's the point? What if more is going on off-camera while we're all distracted by controversial photo-ops and divisive tweets?

This is the basis of a theory Mamamia's Kee Reece explored on pop-culture podcast The Spill; that Kim and Kanye have actually been playing Trump — and the world — all along.

One might even go as far as to call them the most effective social change-making celebrities around.

This theory, that perhaps Kim and Kanye are using Trump to further their change-making efforts, came about on a podcast called Comment By Celebs following criticism of Kanye's reaction (or lack thereof) to the killing of unarmed black man George Floyd in May.

You can listen to Kee Reece discuss how Kim and Kanye are enacting real social change on The Spill podcast, get it in your ears below. Post continues after audio.

Ten days after Floyd's death, Variety confirmed through a representative of Kanye that the rapper had, in fact, launched a college fund for Floyd's six-year-old daughter Gianna, donated $2 million to the black resistance effort, and offered to cover the legal fees for the families of Ahmaud Arbery and Breonna Taylor. He also attended a Black Lives Matter rally in Chicago and is aiding local black-owned businesses in his home town.

Twitter wasn't so easily appeased, with many sharing harsh words for the man who, given his close relationship with Trump, has displayed what is perceived to be anti-Black behaviour in the past.

But as Kee explained, the podcast discussed the idea Kanye has actually been playing the long game with the president.

"They highlighted a thread of conversation going around on Twitter [asking], did Kanye West wear the M.A.G.A. hat to get in front of Trump and push his agenda?" she said.

"For 10 solid years, he's been able to do these really outlandish things that keep him in the media, but he has also had this underlying thread of actually enacting change." 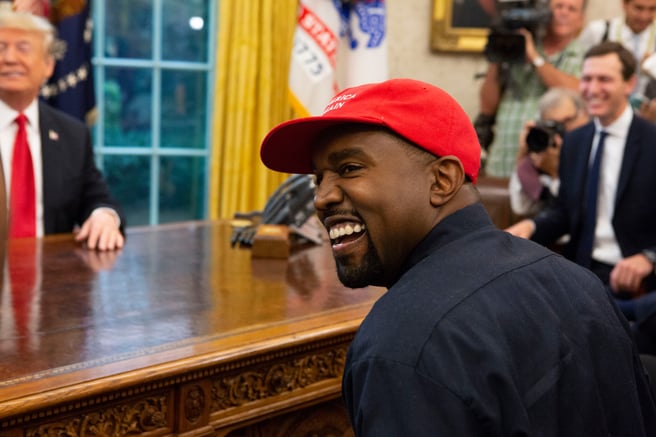 The Comments By Celebs podcast went on to point out, if you don't have a seat at the table, you can't actually make change.

They asked us, do we worry about the big PR stunts that keep him in the headlines, or look at the impact that they have had?

One such impact is Kanye's work to abolish 'stop-and-frisks' in Chicago schools, a policy that allowed police officers to temporarily detain, question and search students for weapons.

It could also be said his connection with Trump gave Kim the foot in the door she needed to advocate for prison reform. 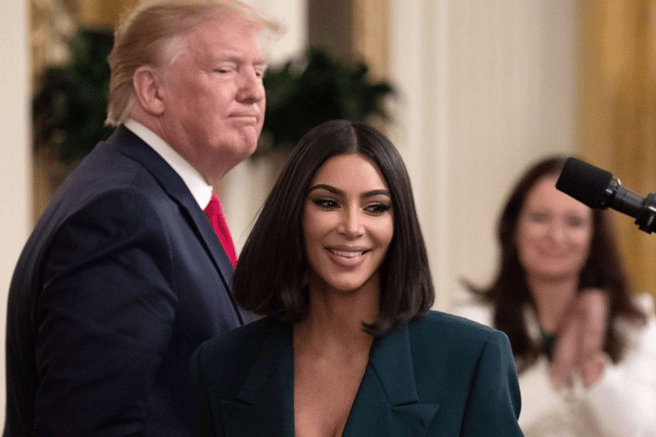 Speaking to The View in 2019, Kim said she was aware what her 2018 visit to the White House to discuss the pardon of Alice Marie Johnson, a grandmother who had been serving a life sentence for a first-time, non-violent drug offence, would look like.

"I definitely was aware [of the potential criticism], but for me, any of my issues have always been more about the people and not about the politics," she said.

"For me to think that I couldn't go and speak to the man that has the power to change people's lives because of some opinions I may have of certain policies and issues to me felt very self-centred that I was more worried about my reputation than saving someone's life. I put that all out the door and I thought, 'You know what? I'm going to choose [Alice Marie Johnson] over my reputation.'"

.@KimKardashian West speaks with @TheView on the backlash she got from working with Pres. Trump on prison reform, saying she decided to “choose” to help commute Alice Marie Johnson “over my reputation.”

These achievements aren't small. Some would argue capitalising on Trump's obsession with celebrity status is just plain smart.

So, if Kanye and Kim are actually playing the President of the United States, can we forgive them for the dark side of their relationship with Trump? The side that sees their star power microphone used to amplify Trump's agenda?

It's food for thought, but as Kee said, "You've got to be inside the house to make actual change."

What do you think about this Kim and Kanye theory? Tell us your thoughts in the comments below.

Reply
Upvote
2 upvotes
It seemed to me that Kim was making nice with Trump as a means to an end. He could help her, he's the President and the one with the power, so a bit of diplomacy was required. Kanye, I'm not so sure. I think sometimes he's a bit of a loose unit, saying things without much thought to the consequences. I wonder if the support for Trump was the along those lines, genuine in the moment, but then once he sat back and thought about it (and saw what kind President Trump is), he's backing off in his support.
C
cat 2 years ago

Reply
Upvote
The Kardashians and Trumps are both families that have become absurdly rich by leveraging inherited money to create a reality TV empire. Why wouldn’t they be besties? And there’s no way Kanye saying that ‘slavery was a choice’ for Black people was part of some master plan. He was having a breakdown, so I wouldn’t hold it against him when he has a genuine track record of supporting black communities, but I wouldn’t try to make it a positive. And Kim is pretending she objects to Trump now because she’s rebranding by studying law since being dumb isn’t so cute over 35. They aren’t geniuses, just regular celebrities.
News
General
Opinion
True Crime
Politics
Sport
Explainer
Entertainment
Celebrity
Reality TV
Movies
TV
Books
Rogue
Royal
Lifestyle
Beauty
Fashion
Weddings
Home
Wellness
Health
Fitness
Travel
Food
Parents
Before The Bump
Pregnancy
Baby
Kids
Teens
School
Parent Opinion
Work & Money
Money
Finance
Career
Lady Startup
Relationships
Sex
Dating
Separation
Friendship
Family
Real Life
Couples