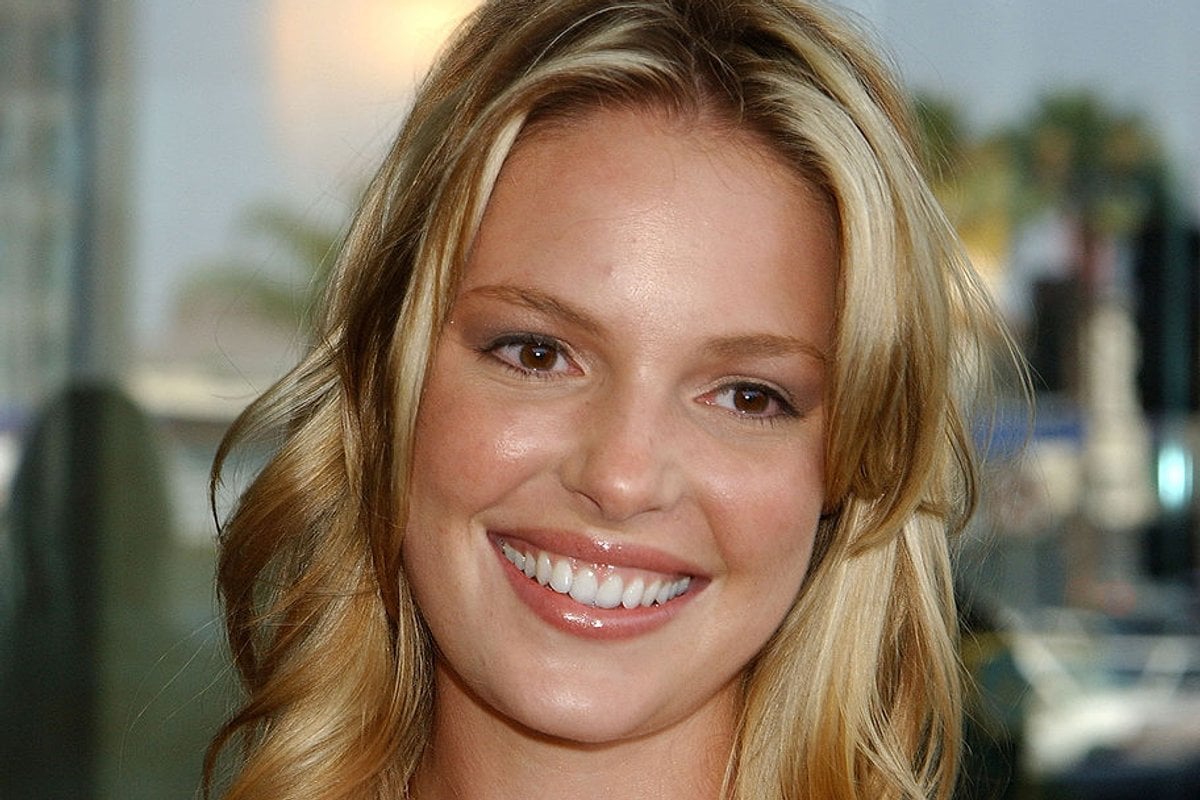 In theatres, a film called The Reader, produced by Harvey Weinstein, and a film called Vicky Cristina Barcelona, written and directed by Woody Allen, are box office successes.

But there's another movie everyone's talking about: 27 Dresses, starring Katherine Heigl. Written and directed by two women, it tells the story of Jane, who has somehow served as a bridesmaid 27 times. She's in love with a man who instead falls in love with her sister (even though James Marsden is single and right... there), and we watch as she wrestles with the idea of having to stand by her sister's side on the wedding day.

I would like it on the record that 27 Dresses gave me an entirely unrealistic idea of what my 20s and early 30s would look like. Surprisingly, I have not been a bridesmaid 27 times, and I definitely haven't attended an underwater wedding, a goth wedding, or a Gone With The Wind themed wedding.

Nonetheless, aside from the unbelievable opening scene where Jane attends two weddings in one night (the stress... I just can't), 27 Dresses was relatively unproblematic as far as movies of the 2000s go. Especially given the names behind the films that opened alongside it.

Video via The Meredith Vieira Show.

But by the end of 2008, it would be Katherine Heigl - not Harvey Weinstein or Woody Allen - who would be frozen out of Hollywood.

Her crime? Being unselfconsciously, unflinchingly... honest.

In a profile for Vanity Fair at the beginning of 2008, Heigl was asked about the decisions of her character Izzie Stevens in the top-rating medical drama, Grey's Anatomy. Breaking one of the unspoken 'rules' of stardom, she acknowledged the commercial considerations that often come with writing for prime time television.

"It was a ratings ploy," she said of a recent dramatic story arc involving her character. "It was absolutely something that shocked people; it wasn’t predictable, and people didn’t see it coming. It’s our fourth season; there’s not a lot of spontaneity left. And business is business; I understand that, but I want there to be some cooperation between the business end and the creative end, so there’s some way of keeping it real."

Later in the interview, Heigl was asked about her 2007 film Knocked Up, directed by Judd Apatow, which had catapulted her to a new level of fame.

"It was a little sexist," she told Vanity Fair. "It paints the women as shrews, as humourless and uptight, and it paints the men as lovable, goofy, fun-loving guys. It exaggerated the characters, and I had a hard time with it, on some days. I’m playing such a bitch; why is she being such a killjoy? Why is this how you’re portraying women? Ninety-eight per cent of the time it was an amazing experience, but it was hard for me to love the movie."

But it was a statement released by Heigl later that year that did irreparable damage to her future in Hollywood.

Having won an Emmy for Best Supporting Actress for her role in Grey's Anatomy in 2007, she was expected to be nominated for the award in 2008. Instead, Heigl pulled out.

"I did not feel that I was given the material this season to warrant an Emmy nomination and in an effort to maintain the integrity of the academy organisation, I withdrew my name from contention," she said.

"In addition, I did not want to potentially take away an opportunity from an actress who was given such materials."

The decision was understandably interpreted as a criticism of Grey's Anatomy creator, head writer, and executive producer Shonda Rhimes.

From that point onwards, rumours about Heigl's on-set behaviour dominated gossip pages, and her reputation suffered.

Speaking to David Letterman in 2009, she was asked about the new season of Grey's Anatomy.

"Our first day back was Wednesday," she said, "and it was - I’m going to keep saying this because I hope it embarrasses them - a 17-hour day, which I think is cruel and mean."

Days later, sources said it was actually Heigl's fault the 17-hour day had to happen in the first place.

"Poor Katherine Heigl," said journalist Ken Levine. "What she neglected to add was this: This 'cruel' shooting schedule was only to accommodate HER and her needs. The producers graciously shuffled things around so she could go off and do promotion for her new film. Also, with union rules, the producers had to pay a ton of overtime and penalties to make this happen. The thanks they get is Katherine Heigl going on national television hoping to embarrass them."

Despite the damage to her reputation, Heigl was still starring in big-budget films alongside some of the most well-known men in Hollywood. There was The Ugly Truth in 2009 with Gerard Butler, Killers in 2010 with Ashton Kutcher, and Life As We Know It the same year with Josh Duhamel.

But in March 2010, Heigl reportedly didn't show up for work on Grey's Anatomy. Shonda Rhimes reached an agreement to release her immediately from her contract, and Izzie Stevens never returned to the show.

In an interview with Oprah Winfrey in 2012, Shonda Rhimes said Heigl's statement about the Emmys had "stung". 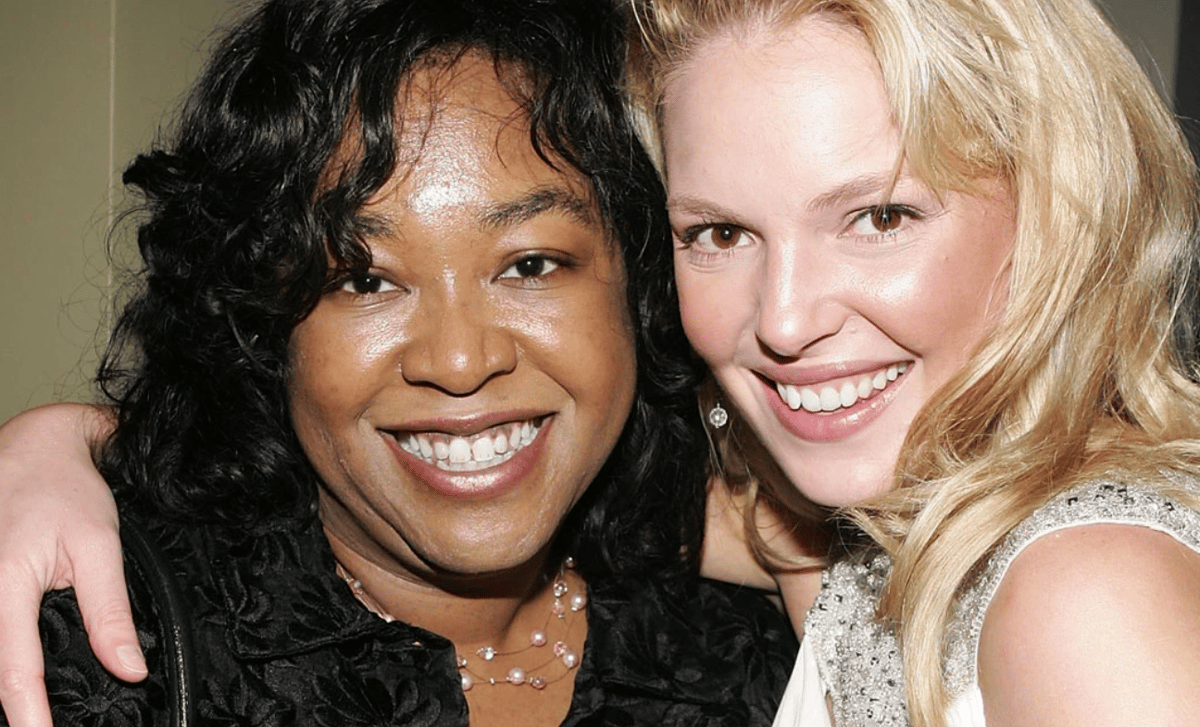 "When people show you who they are, believe them. I carry that with me a lot. It has served me well."

In the years since, Rhimes has been more forthcoming about her experiences with Heigl. Speaking to The Hollywood Reporter in 2014 about her new show Scandal, Rhimes said there were "no Heigls" on set.

"I don't put up with bullsh*t or nasty people."

Heigl's Knocked Up co-star Seth Rogen has also spoken on the record about feeling "somewhat betrayed" by her comments about the film.

"People seemed to like it," he said. "We were funny together. I was having a really good time, and then when I heard afterward that she didn’t like it, that she seemed to not like the process, and she did not like the end product either, I think when that happens - also your trust feels somewhat betrayed."

Heigl had burnt bridges, and her career would never recover. In 2011, she appeared in New Year's Eve alongside Zac Efron, Michelle Pfeiffer, Hilary Swank and Sarah Jessica Parker, but it received harsh reviews. Her next film, One for the Money, released in 2012, bombed at the box office and earned her a Golden Raspberry nomination for Worst Actress.

In 2016, Heigl apologised for her comments about her Grey's Anatomy Emmy nomination, saying she was "embarrassed".

"I shouldn't have said anything publicly," she told Howard Stern. "But at the time, I didn't think anybody would notice. I just quietly didn't submit and then it became a story, and I felt I was obligated to make my statement."

In recent years, there's been a reassessment of how the media reported - and how we interpreted - Heigl's behaviour. A 2021 feature in The Washington Post headlined 'Katherine Heigl is Done Apologising' argued that "maybe, just maybe, the Heigl backlash outweighed the crime". 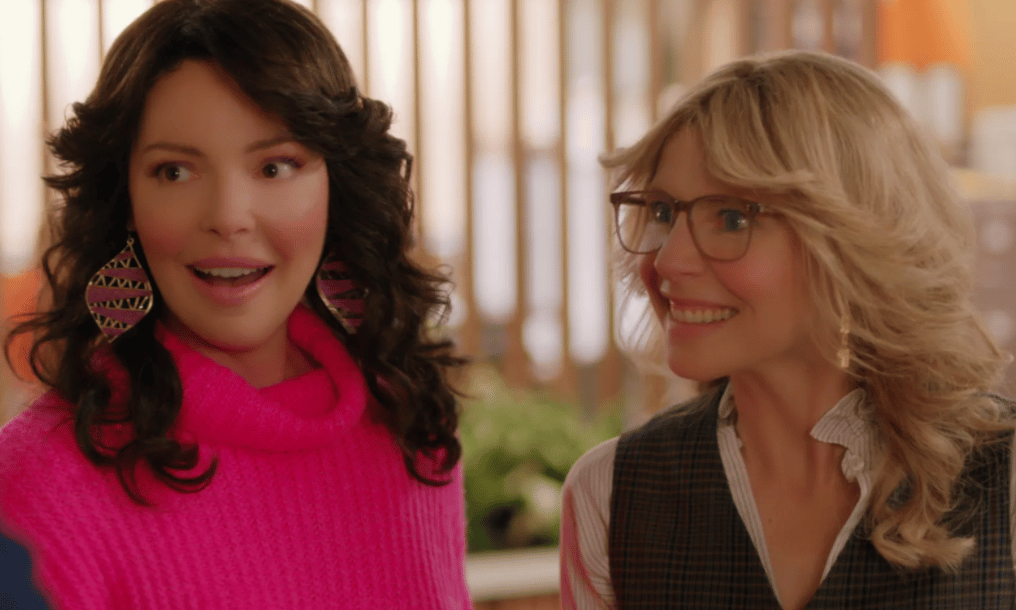 "In a post-#MeToo world, in a post-Trump world," the author Ashley Spencer questioned, "is it not laughable that so much grief was given to a woman for speaking her mind?"

"I remember Heigl said something on a talk show about the insane hours we were working, and she was 100 per cent right," Pompeo said, speaking to co-star Kate Walsh, on her Tell Me podcast.

"Had she said that today, she'd be a complete hero. But she's ahead of her time, made a statement about our crazy hours and, of course, let's slam a woman and call her ungrateful."

She continued: "She was f**king ballsy for saying it. And she was telling the truth. She wasn't lying."

Even with more than a decade of hindsight, most of us have a visceral response to Heigl's behaviour: Don't criticise a trailblazing woman of colour for not doing a good enough job at writing the show you got an Emmy for. Don't call out the writing on your own show as being a "ratings ploy". If your own schedule was to blame, don't describe a 17-hour day as "cruel and mean".

But is it not telling that our response to an outspoken woman, who doesn't just sit down, shut up and follow the rules, is to classify her as 'rude', or 'entitled', or God forbid, a 'bitch'?

Is it not telling that that last label is the very worst thing a successful woman can be? That it's an attribute that cancels out the myriad other parts of who she is, and makes her entirely undeserving of everything she's achieved?

The story of Katherine Heigl is an uncomfortable reminder of the double standard that exists not only in Hollywood but in the social world more broadly. Because while Katherine Heigl seemingly had a black mark against her name - in the industry and with audiences - from 2008 onwards, it would be a decade before people like Harvey Weinstein and Woody Allen would be interrogated.

Even now, men with truly disturbing histories are regular fixtures in the movies and TV shows coming out of Hollywood. But 'difficult' men are forgiven in a way 'difficult' women aren't. Their transgressions are part of who they are, not the whole. They're allowed to be socially inept and funny, a philanderer and a romantic, a control freak and a genius.

But after 2008, Katherine Heigl wasn't afforded the luxury of being anything other than rude.

And she paid for it with her career.

For more from Clare Stephens, you can follow her on Instagram, or listen to her podcast Cancelled here.

Listen to Cancelled: Mamamia's comedy podcast about what happens to celebrities when the world turns on them. Post continues after audio.

Reply
Upvote
You're trying to sell your house and you're agent is telling prospective buyers that the plumbing's really noisy and it's kinda damp.
How do you react?
The same goes here, there is  a LOT of money and many livelihoods at stake, so you don't want highly visible ambassadors for the shows to be running them down.
Further, Hollywood is built on bum kissing. The public praise for one's colleagues is perenially effusive to the point where it falls hard on to Australian ears. Heigl's commentary ran very counter to the norms. Egos run huge and fragile in La La Land.