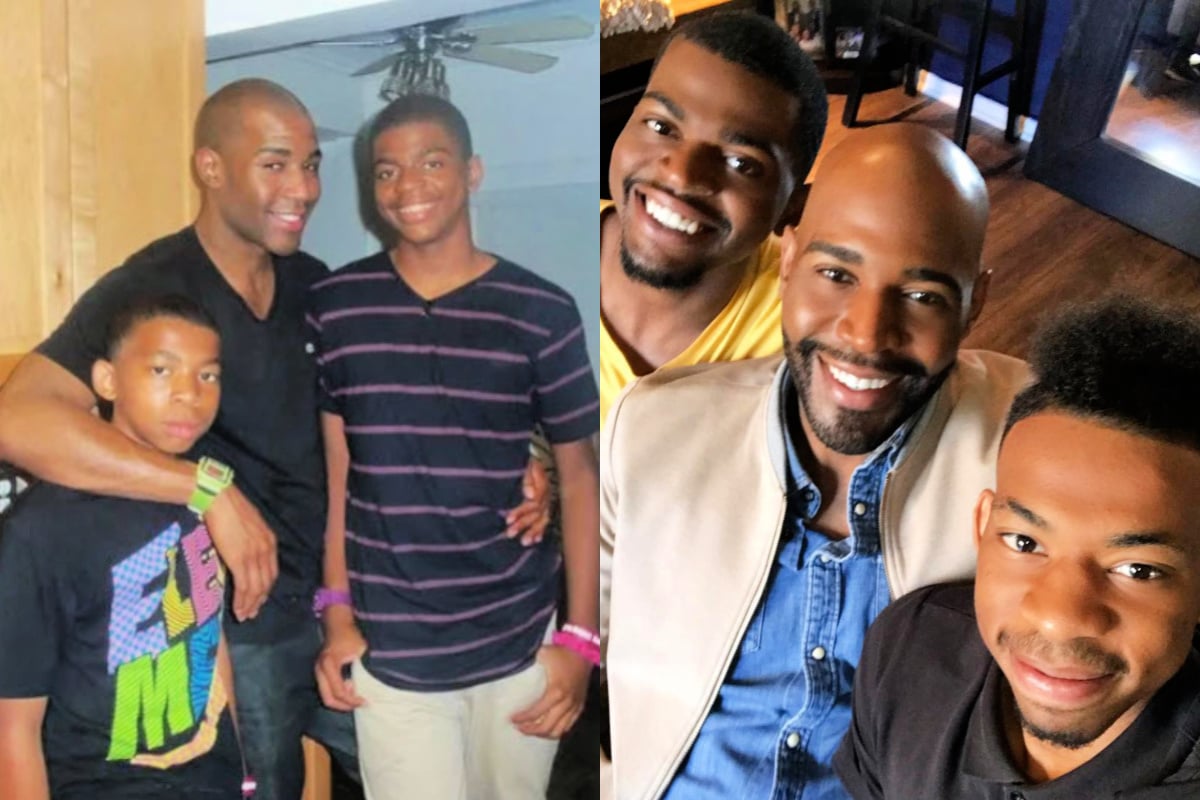 Fact: Karamo Brown is a very lovely man and anyone who has ever watched an episode of Netflix's Queer Eye would agree.

In his role as the 'culture guru' on the reboot of the original Queer Eye for the Straight Guy makeover show, the 39-year-old manages to dish out tear-jerking life advice that helps people resolve their issues in just one week. (Well, kind of.)

From finding self confidence and moving on from trauma, to reconnecting with loved ones and healing broken relationships, Karamo has a way of always cutting straight to the deep emotions, even with the most closed-off of people.

But for the first time in the show's five seasons, we got a glimpse into his personal life with an appearance from his two sons – Jason, 22, and Christian, 20.

From social media, Karamo's sons appear to have close relationships with their dad and stepdad, Karamo's fiance Ian Jordan. But it wasn't always so.

WATCH: Karamo Brown talks about his modern family below. Post continues after video.

When Karamo was in his mid-20s, he was riding the wave of fame that came with being the first ever openly gay black man on reality TV on The Real World: Philadelphia back in 2004.

It wasn't until 2007, two years after the show wrapped, that Karamo found out one of the millions of people who had watched him on TV was a 10-year-old son he never knew he had. He found out by way of overdue child support papers in the mail sent on behalf of his last high school girlfriend.

“I came out at 16 years old as a proud, gay man. My last girlfriend in high school—when I was 15—became pregnant with my child but did not tell me," Karamo told Parents.com.

"She moved away, and I never had contact with her again; remember this is before social media."

Karamo told the publication although he was "confused, sad and angry" when he suddenly found out he was a father at the age of 26, he was excited about meeting his son and has never held any anger or blame towards his former partner.

"We were both kids and don’t blame her for the decision she made because the choice was not hers, it was the adults around us."

After flying to Texas and meeting his son with permission from Jason's mother, Karamo received full custody of his son that same year. Overnight, his life changed completely. Gone was the reality TV bachelor who once described himself as a "functioning addict". Now, he was a single dad.

In a profile with The Advocate, Karamo said, “People say, ‘You saved his life.' And I say, ‘No, he saved mine.’ Because once I saw that there was somebody else out there, it made me immediately start work on myself, because I wanted him to have a better relationship [with me] than I had with my father.”

“It wasn’t until I became a dad that I asked myself how would I feel if my son had the same relationship with drugs and alcohol as I did. I quit and have never looked back.”

For the 10 years that followed, Karamo stepped back from his emerging career in the entertainment industry and dedicated his life to becoming a social worker and being a father. In 2011, he also adopted Jason's half-brother Chris so the two brothers could stay together.

"Chris was nine at the time, and it has been an amazing journey. Again, I give my son’s mother so much praise for allowing me to step in and support her in raising our kids,” Karamo told Parents.com.

Now adults themselves, Jason and Chris continue to have relationships with their mother and fathers.

Jason “Rachel” Brown" works in the entertainment industry and hopes to become a successful TV host and producer. He also shared he is pansexual in 2019, and co-authored a children's book called I Am Perfectly Designed with his father. Younger brother Chris is a rapper and releases music under the name Yung Cvo.

Both Jason and Chris have said their upbringing with Karamo was strict, but it was something they needed in their lives.

"He’s trying to help me be the best I can be and I really appreciate that and I love him dearly for it."

While Karamo continues his high-profile work on Queer Eye and using his platform to lift up various LGBTQIA and black youth organisations, being a father and keeping his "modern family" strong is still his number one priority.

"When people see us all together, they think we're brothers. And then my partner walks up who is 10 years my senior , and white with grey hair... but it works. Then my sons' mother is there and we're all together. But it works because we're a family. At the end of the day, we love each other and we support each other."

Are you watching Queer Eye? Tell us your thoughts in the comments below!