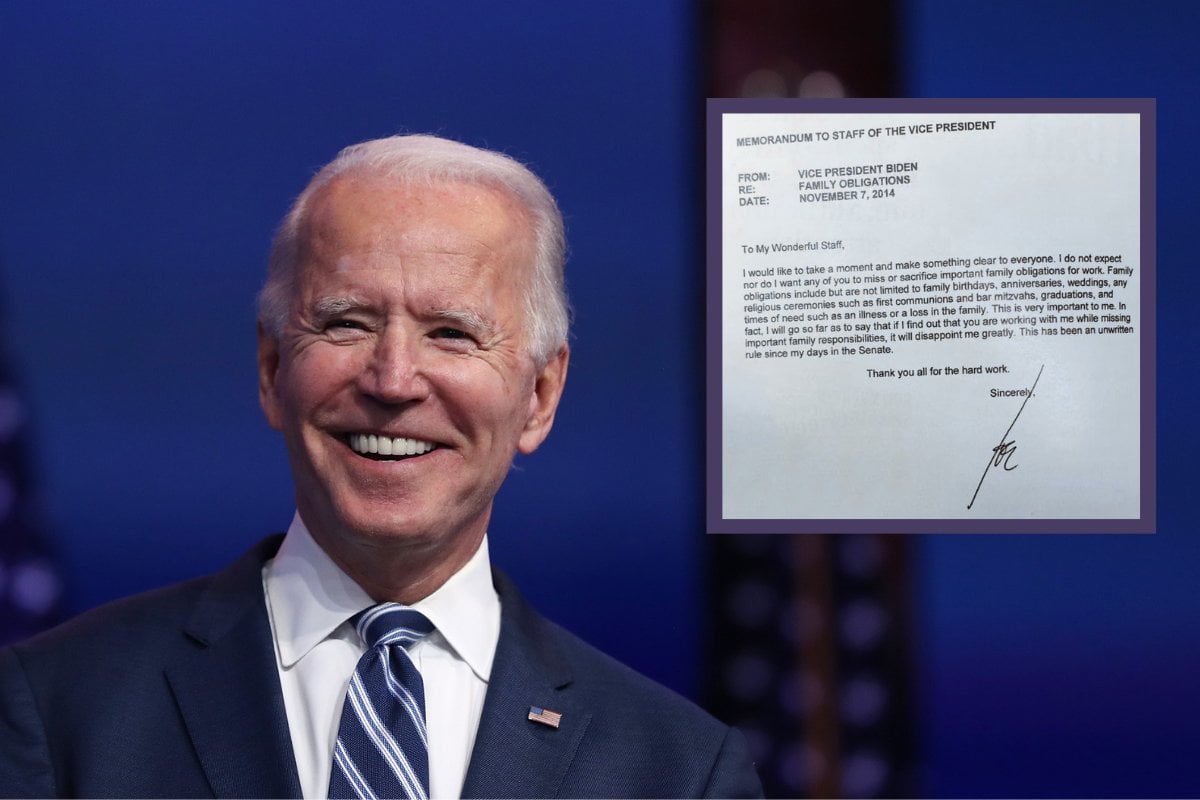 Working in politics doesn't scream 'work life balance', but that's something President-elect Joe Biden has advocated for ever since first arriving in Washington in 1972.

The 77-year-old famously commuted four hours a day between his home in Delaware to Washington DC during his time in the senate, in order to spend the evenings with his sons, and has spoken at length about the importance of family.

And he hoped to instill similar attitudes in his staff.

Video via The Tonight Show.

In a resurfaced memo sent to his employees in 2014, during his time as Vice President in the Obama administration, Biden said he strongly supported them taking time off for family obligations.

"To My Wonderful Staff," the memo began.

"I would like to take a moment and make something clear to everyone. I do not expect nor do I want any of you to miss or sacrifice important family obligations for work. Family obligations include but are not limited to family birthdays, anniversaries, weddings, any religious ceremonies such as first communions and bar mitzvahs, graduations, and times of need such as illness or a loss in the family.

"This is very important to me. In fact, I will go so far as to say that if I find out that you are working with me while missing important family responsibilities, it will disappoint me greatly. This has been an unwritten rule since my days in the Senate.

"Thank you all for the hard work."

He signed it simply 'Joe'. 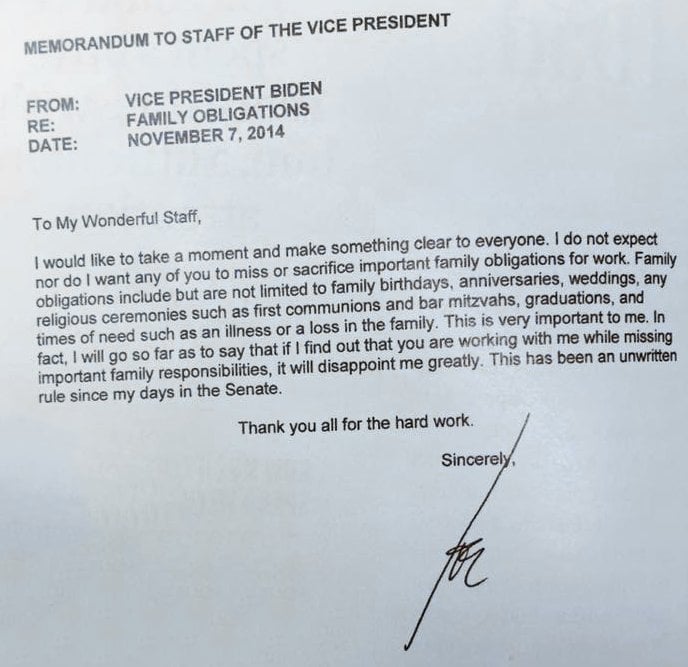 In a 2016 interview on The Tonight Show Starring Jimmy Fallon Biden explained the memo further and how the deaths of his first wife Neilia Biden and one year-old daughter Naomi, who died in a car crash soon after he was first elected to the Senate in 1972, shaped his feelings on the matter.

Biden's two sons, Beau and Hunter, were also injured in the crash but made full recoveries. 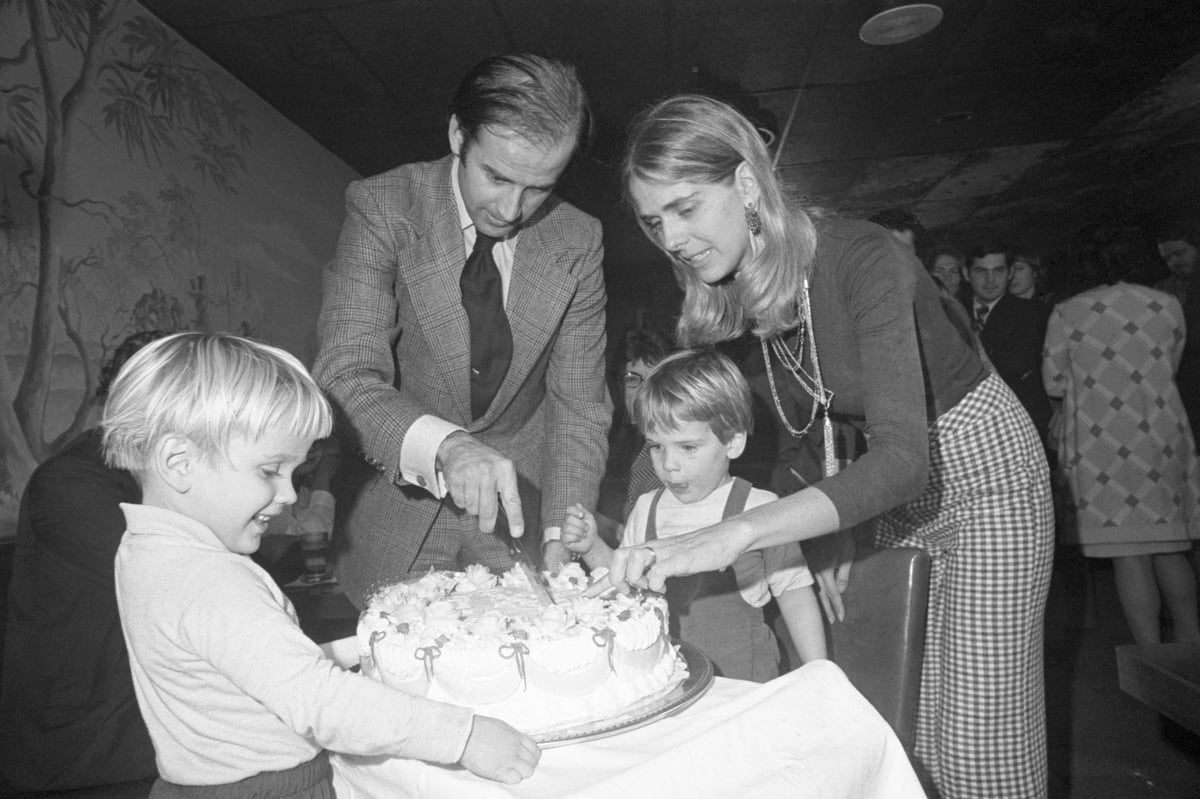 Beau died in 2015, less than two years after being diagnosed with brain cancer (and six months after Biden sent the memo).

"In my generation it was about quality time instead of quantity," he explained to Fallon.

"There's no such thing as quality time. Every important thing your child will say to you will be 'off script', as they say. Will be at a time when you don't expect it.

"Kids can hold an idea for maybe 12, 14 hours, but after that it's gone. You lose it. And this idea, the way we all rationalise... 'you know, if I make this business trip I'll miss his last football game but he'll understand', that's just a bunch of malarkey."

Read: "God had played a horrible trick on me." The story of Joe Biden's quiet personal tragedies.

To this day, Biden does not work on December 18 - the anniversary of Neilia and Naomi's death.

At the 2008 Democratic National Convention, Beau introduced his father and spoke of this commitment to his family.

"Many of you know him as a distinguished and accomplished senator. I know him as an incredible father and a loving father.

"A man who hustled home to Delaware after the last vote so he wouldn't miss me and my brother's games. Who after returning from a war-torn region of the world would tiptoe, literally, into our rooms and kiss us goodbye. Who turns down some fancy cocktail party in Washington so he won't miss my daughter Natalie's birthday." 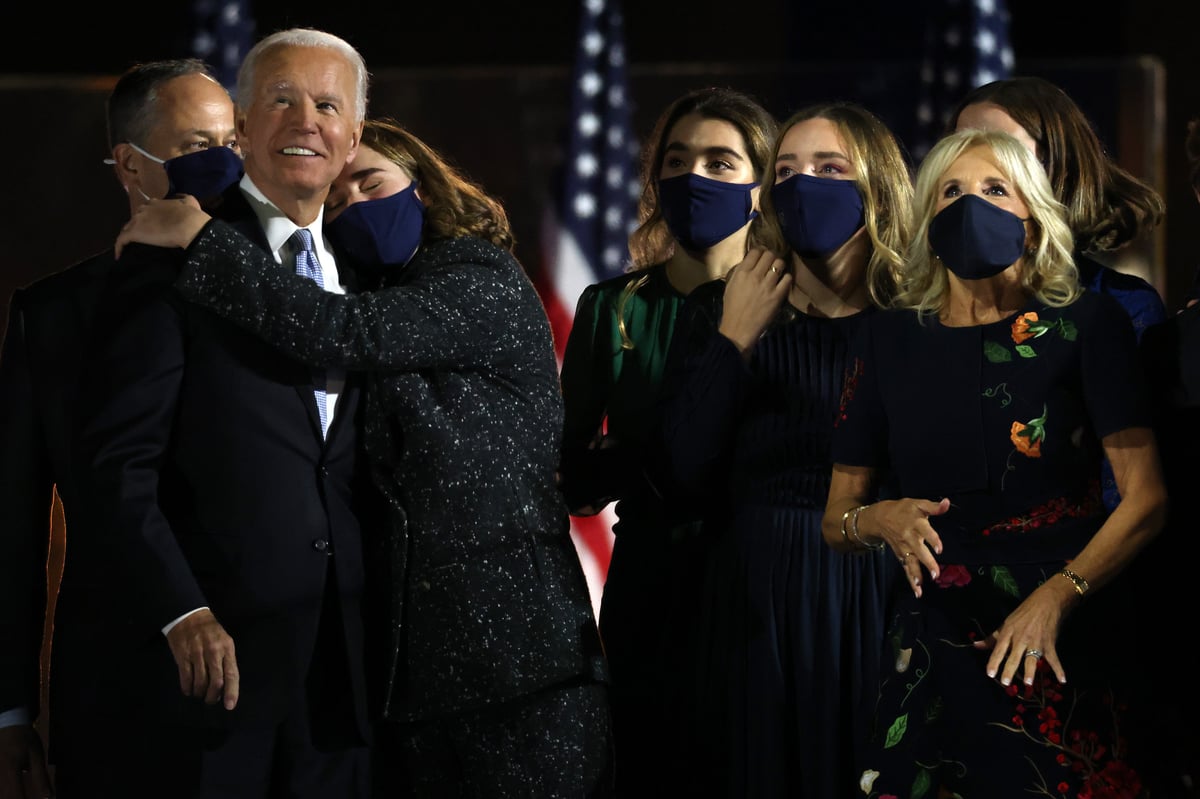 Biden, terribly familiar with family tragedy, is not willing to miss any moments.

He told Fallon he didn't want any of his staff to feel pressure to do something for him, when there was something that mattered to their family going on.

"There's nothing noble about it," he insisted. "I do it."

The message is especially important - and surprising - in modern working environments, where the exact opposite is so often expected from employees, even if it is not verbalised.

In many workplaces, the 'hustle' is glamorised. Late nights, long hours, always being switched on.

Biden explained when he ran for Senate for the second time, his opponent ran ads that stated he'd missed 14 per cent of Senate votes.

He was, of course, re-elected.

But he also recognises his privilege.

"It's a lot easier for me, because I had a million employees... But I felt if I can do that, I should not hold my staff to any different standard."

Fallon responded to say he thought it was a great message, and mentioned he had two daughters.

Reply
Upvote
Such a great attitude, I hope it spreads. My husband has been dealing with health issues for the past year or so, and his company have been brilliant. His manager has been great about him taking time off, completely flexible and understanding, especially during the whole Covid thing which has meant him having to do telehealth calls during the workday etc. And the thing is, this just makes my husband that much happier in his work, which I think a lot of companies don't understand. He will work his bum off for his boss, because he knows he will be treated like a human being in return. If his company had been less flexible, he would still work hard (because he's a decent person), but he wouldn't go above and beyond in the same way.
guest2 4 months ago

Reply
Upvote
@rush I think Joe Biden is a decent person, but I suspect the demands from his staff might be very different once he assumes the Presidency in January.
cat 4 months ago

Reply
Upvote
1 upvotes
@rush that is so rare and so good. Hope your husband feels better soon!
rush 4 months ago

Reply
Upvote
@cat he's doing great, thanks, nearly back to 100%. And hopefully Covid has made some businesses realise that the same old 9-5 work style isn't actually compulsory, there is flexibility in many jobs. A friend of mine will probably end up WFH a lot even after Covid is done, I think his company has been surprised how well it's worked for them.
rush 4 months ago