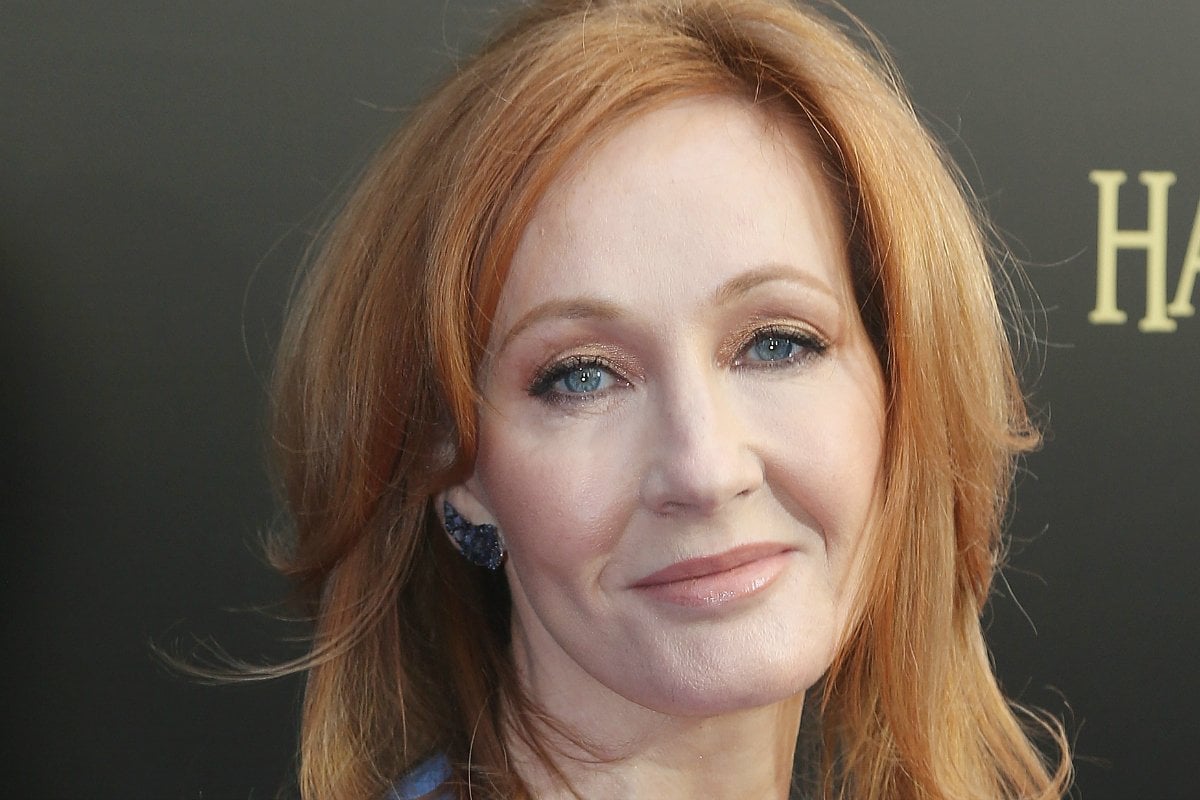 J.K. Rowling's new novel, Troubled Blood, is one of the highest-selling books in the world right now. It's at the top of the charts in Australia and the UK, and it holds the number-three spot on the coveted New York Times best-seller list.

But there's a vocal contingent of critics arguing that it should be pulled from the shelves.

Troubled Blood is the fifth in the Cormoran Strike series of detective novels written by Rowling under the pen name Robert Galbraith.

The issue of contention with this particular book is that it features a male serial killer who dresses in women's clothing. Which, in the context of Rowling's recent comments about transgender people, has been interpreted by some as another slight at those who don't conform to a gender binary.

Watch: Just some of the ignorance trans people face in the dating world.

Several independent retailers have refused to stock the book.

Among them is Australian outlet Secret Book Stuff, the owners of which told Mamamia Out Loud, "If bookshops publicly choosing not to stock J.K.'s new book means that a little trans kid can walk past or walk inside and feel like it's another safe space for them to be, then that's the ultimate allyship in our eyes and it's all that matters".

Remind me what J.K. Rowling has said about trans identity.

Just a matter of years ago, J.K. Rowling was perhaps the world's most beloved children's author; the creator of the magical world of Harry Potter into which millions of children had escaped.

But from roughly 2017 onward, the Brit alienated many by leaving social media breadcrumbs that hinted at her conservative stance on gender identity.

That year, she hit the 'like' button on a tweet directing to a Medium article that claimed cisgender women are scared of sharing female-designated spaces with trans women.

In 2019, she tweeted her support for Maya Forstater, a British woman who was sacked for tweeting anti-trans statements, including "men cannot change into women".

And on June 7 this year, she retweeted an article to her 14.5 million followers titled, "Creating a more equal post-COVID-19 world for people who menstruate".

"'People who menstruate,'" she commented. "I'm sure there used to be a word for those people. Someone help me out. Wumben? Wimpund? Woomud?"

The comment, in the eyes of many trans people and advocates, entirely erased the experience of trans men. As one tweeted, "Not all women menstruate and not all who menstruate are women. There are many girls, non-binary folx, trans boys, and trans men who also get a period." 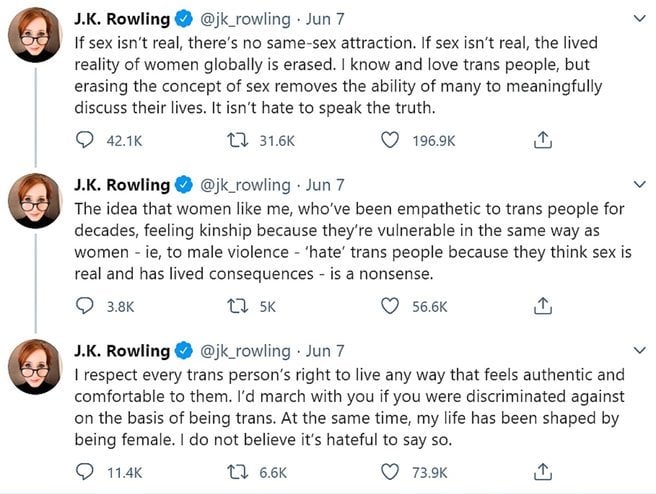 Later that month, Rowling attempted to explain her position on trans identity in a lengthy essay, which she published to her website. But it only served to stoke the controversy.

In the 3600-word piece, Rowling accused the trans rights movement of doing "demonstrable harm in seeking to erode 'woman' as a political and biological class" and of "offering cover to predators like few before it".

She also confirmed her opposition to trans women accessing female-designated spaces due to a perceived risk that cis men will exploit the opportunity to assault those inside: "When you throw open the doors of bathrooms and changing rooms to any man who believes or feels he’s a woman... then you open the door to any and all men who wish to come inside."

She also appeared to conflate the gender dysphoria experienced by trans people with her own desire to be accepted by her peers and family: "I struggled with severe OCD as a teenager. If I’d found community and sympathy online that I couldn’t find in my immediate environment, I believe I could have been persuaded to turn myself into the son my father had openly said he’d have preferred".

You can read the essay in full here.

So, should Troubled Blood be pulled from the shelves?: Each side of the debate.

By portraying cross-dressing as the quirk of a murderous villain, Rowling has penned a damaging portrayal of people who exist outside a gender binary.

It appears to be part of a pattern. Consider her recent comments undermining the experience of trans people. Consider the fact that her second 'Cormoran Strike' novel featured a trans character whom she labelled "unstable and aggressive". And now, consider the message sent by a dangerous, duplicitous deviant dressing in women's clothes (as one reviewer for The Telegraph put it, the moral of the book seems to be "never trust a man in a dress").

Representations like these stoke ignorance and prejudice and are hurtful to an already marginalised community.

Troubled Blood isn't harmful on its own. It doesn't contain hate speech nor incite violence, and the supposedly contentious character is not transgender — as one Washington Post journalist put it, "Mostly, he’s a red herring".

The opposition to this book stems from the opposition to its author. Fans feel betrayed that the person behind the "everyone is welcome at Hogwarts" ethos holds certain intolerant ideas.

Pulling the book from the shelves therefore suggests that because Rowling has opinions contrary to the norm, her work should not be given a platform. That is intolerant, and that is censorship.

How has Rowling responded to the backlash?

While she hasn't addressed the backlash to Troubled Blood explicitly, Rowling last week tweeted a photograph of a t-shirt, writing, "Sometimes a t-shirt just speaks to you".

The slogan across the front?

laura__palmer 7 months ago
Reply
Upvote
2 upvotes
I mean, can we all just try to remember (JK Rowling included) that trans people exist, they are trying to get by in this world that is very hostile towards them and they deserve some basic respect and dignity? In all this who can use a bathroom and stuff, can we remember that there are real people who are trans and who just want to go and use a toilet in peace and safety? All of this debating around "free speech" and who can be a woman is ignoring the fact that trans people exist, they are at risk of being assaulted or killed and they have high rates of mental health issues, mostly due to how society sees them. We can sit here and debate this stuff, or JKs (and other terfs) rights as much as we like, but it's not personal for us like it is for the trans person who is just trying to live their life in peace and who has to constantly justify their existence to the rest of the world.
I've said it a few times, but JK isn't a victim. Others are a victim of her, and those who hold the same views she does.

cat 7 months ago
Reply
Upvote
1 upvotes
@laura__palmer I honestly can’t believe how many people don’t get this and think this issue is about them and their feelings- not real humans who are some of the most vulnerable in our society.

amylouise0185 7 months ago
Reply
Upvote
So shall we all boycott Silence of the lambs and Psycho aswell. What about Tootsie, White Chick's, Big Mommas House, The Nutty professor, The Bird Cage, and all other films or books that portray cross dressing or trans characters?
Rather than using the book as a platform to raise awareness of queer issues, the haters are turning into an Us and Them battleground and they will lose support from both sides with such a totalitarian approach.

laura__palmer 7 months ago
Reply
Upvote
1 upvotes
@amylouise0185 JK doesn't want to raise awareness of queer issues, she doesn't like trans people and wrote a manifesto outlining why. She turned it into the us and them battleground to start with.

guest2 7 months ago
Reply
Upvote
4 upvotes
@laura__palmer Rowling has never been against trans people.  She does however believe there are differences between trans women and biological women and in a country which believes in free speech, she should have the right to express this without receiving death threats.

cat 7 months ago
Reply
Upvote
@amylouise0185 you’re really going to go into bat for The Nutty Professor and White Chicks? Weird hill to die on.
No one is boycotting Silence of the Lambs, but  plenty of people can see that it’s very problematic. What we wouldn’t do is remake it in 2020 when we know those issues are harmful. It’s not super hard to be a decent person.

laura__palmer 7 months ago
Reply
Upvote
3 upvotes
@guest2 I've read her manifesto. She is against trans people. She pulls out a lot of ignorant and cruel stuff. She threw the first punch by writing that. She has to accept the consequences. The only thing I do agree with is that she shouldn't get death threats and I don't like the whole "punch a terf" thing. Those people need calling out as much as JK does. But her speech can absolutely be challenged. Free speech doesn't mean you get to say what you like without consequences.

We can still accept trans people as the gender they wish to be seen as and protect the hard-fought rights of women. I went down the terf path for a while. It's full of bitterness and ignorance and I don't think it's necessary to treat people who are struggling to fit in and who have high rates of suicide and are assaulted and murdered at high rates like they aren't worthy of respect, which is what JK does in her manifesto on trans people.
News
General
Opinion
True Crime
Politics
Sport
Explainer
Entertainment
Celebrity
Reality TV
Movies
TV
Books
Rogue
Royal
Lifestyle
Beauty
Fashion
Weddings
Home
Wellness
Health
Fitness
Travel
Food
Parents
Before The Bump
Pregnancy
Baby
Kids
Teens
School
Parent Opinion
Work & Money
Money
Finance
Career
Lady Startup
Relationships
Sex
Dating
Separation
Friendship
Family
Real Life
Couples