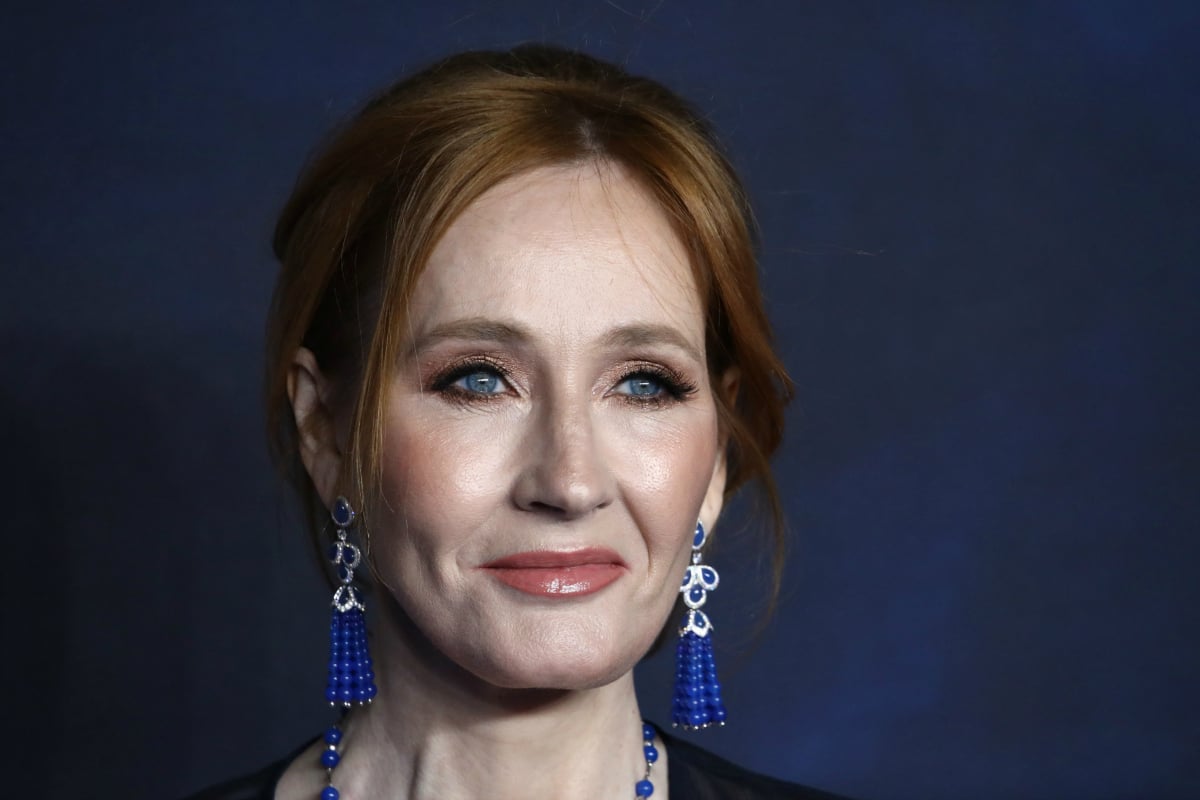 This post was originally published on June 9, 2020. It has since been updated with new details.

She also suggested that young people struggling with mental health issues are being "shunted" towards this kind of therapy "when it isn't in their best interests".

It's the second time in two months the Harry Potter author has faced criticism, after first voicing what some have called trans-phobic sentiments about periods, womanhood, and sex versus gender.

So how did we get here in the first place?

Over the past three years, J.K. Rowling has left a trail of social media breadcrumbs, hinting at her stance on transgender identity.

In 2017, she hit the 'like' button on a tweet directing to a Medium article that claimed cisgender women are scared of sharing female-designated spaces with trans women. (Or, in the author's words, "Tell us again how we should willingly get changed next to a stranger with a penis while focusing on ensuring our fearful body language doesn’t make them feel uncomfortable.")

In March 2018, Rowling then 'liked' a tweet that described transgender women as "men in dresses". Rowling's reps backpedalled fast on that one.

"It was a mistake," they told NewsWeek. "I’m afraid J.K. Rowling had a clumsy and middle-aged moment and this is not the first time she has favourited by holding her phone incorrectly!"

But the following year, Rowling also tweeted her support for Maya Forstater, a British woman who was fired from her job for tweeting anti-trans statements, including "men cannot change into women".

Dress however you please.
Call yourself whatever you like.
Sleep with any consenting adult who’ll have you.
Live your best life in peace and security.
But force women out of their jobs for stating that sex is real? #IStandWithMaya #ThisIsNotADrill

Rowling's comments this week are her most explicit on the issue yet.

What did J.K. Rowling say recently?

On June 7, J.K. Rowling retweeted an article to her 14.5 million followers titled, "Creating a more equal post-COVID-19 world for people who menstruate".

"'People who menstruate,'" she wrote. "I’m sure there used to be a word for those people. Someone help me out. Wumben? Wimpund? Woomud?"

Many Twitter users accused Rowling of transphobia, or at least harmful ignorance, and pointed out how her comment entirely erased the experience of so many people who have periods.

"Not all women menstruate and not all who menstruate are women. There are many girls, non-binary folx, trans boys, and trans men who also get a period," one wrote.

"I have endometriosis and an IUD in place to treat it, and therefore, I no longer menstruate," wrote another. "I haven't had a menstrual cycle since early high school, and I'm 21. I guess I'm not a woman anymore?"

But Rowling doubled down... 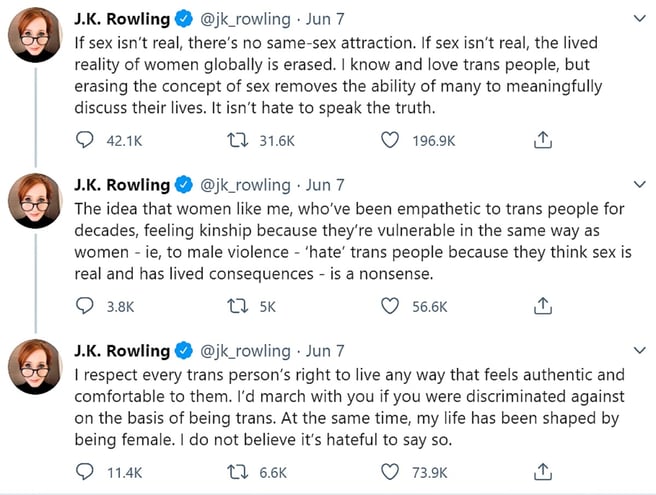 She also shared an article that alleged the LGBTQI community has become "dangerously anti-lesbian and pro child abuse" — a reference to gender confirmation surgery undertaken by some trans youth.

Rowling's stance has led some to describe her as a TERF: trans-exclusionary radical feminist.

The acronym, which was coined by an Australian writer Viv Smyth in 2008, refers to a vocal group of feminists who argue that the only "real women" are those born with female sex organs and an XX chromosome. Trans women, in their view, couldn't possibly understand the female experience and shouldn't have access to female-designated spaces.

By tieing gender (which is the social and cultural expression of one's sex) to biology, they erase the experience of trans and non-binary people and suggest they shouldn't have any agency in their own gender expression.

On June 10, Rowling published a 3,600 word essay in response to the criticism, stepping the reader through five reasons she is concerned about the trajectory of trans activism. Read the full text on her website, but this is the crux:

Rowling concluded by insisting she is not looking for sympathy.

"I’ve only mentioned my past because, like every other human being on this planet, I have a complex backstory which shapes my fears, my interests and my opinions. I never forget that inner complexity when I’m creating a fictional character and I certainly never forget it when it comes to trans people.

"All I’m asking – all I want – is for similar empathy, similar understanding, to be extended to the many millions of women whose sole crime is wanting their concerns to be heard without receiving threats and abuse."﻿

"Hormone prescriptions are the new anti depressants," the tweet read. "Yes they are sometimes necessary and lifesaving, but they should be a last resort. Pure laziness for those who would rather medicate than put in the time and effort to heal people’s minds.”

﻿After receiving widespread criticism, Rowling attempted to clarify her stance on both trans women and mental health in a series of tweets.

"Many health professionals are concerned that young people struggling with their mental health are being shunted towards hormones and surgery when this may not be in their best interests," she wrote in the 11-tweet thread.

"Many, myself included, believe we are watching a new kind of conversion therapy for young gay people, who are being set on a lifelong path of medicalisation that may result in the loss of their fertility and/or full sexual function," she said.

Rowling added that she believed the long-term health risks of cross-sex hormones "are often minimised or denied by trans activists".

She then posted a link to an account of a woman who has "detransitioned" after briefly living as a trans man.

Rowling's comments over the past two months have been broadly condemned by LGBTQI activists, including the organisation GLAAD, which tweeted, "JK Rowling continues to align herself with an ideology which willfully distorts facts about gender identity and people who are trans. In 2020, there is no excuse for targeting trans people. We stand with trans youth, especially those Harry Potter fans hurt by her inaccurate and cruel tweets".

.@jk_rowling These times are hard enough without YOU, a wealthy white woman, tweeting transphobia from your mansion.

Trans people really don't need your bullshit right now. Do us all a favour and give it a rest.

To say that you're a disappointment is an understatement #TERF https://t.co/oFekQHIqCs

"Transgender women are women. Any statement to the contrary erases the identity and dignity of transgender people and goes against all advice given by professional health care associations who have far more expertise on this subject matter than either Jo or I," he wrote in a statement on the organisation's website.

Other stars from the Harry Potter film universe also spoke out in support of the trans community, including Emma Watson and Fantastic Beasts star Eddie Redmayne.

The trans community is undoubtedly marginalised.

Recent research by UNSW's The Kirby Institute found that 53 per cent of trans and gender diverse Australians have experienced sexual violence or coercion. That's four times the rate of the wider Australian population.

Rowling's statements, which first came in the thick of Pride Month, have caused yet more hurt to many trans people.

Trans author Jackson Bird described her trans-erasure as "a punch in the guts" to gender diverse people who found much-needed escapism in the magical world she created and acceptance in the diverse fan community it inspired. As he previously wrote for The New York Times, her views are painfully at odds with the core message of her all-time-best-selling series: that love is powerful, above all else.

"I can only hope she takes this opportunity to practice some of the same values she taught us and listens to trans fans of her books," Bird wrote.

"Let us tell you about our lives, how we got here, and even how the world you created saved many of us."

If you are thinking about suicide or experiencing a personal crisis help is available through Lifeline. Call 13 11 14. No one needs to face their problems alone.