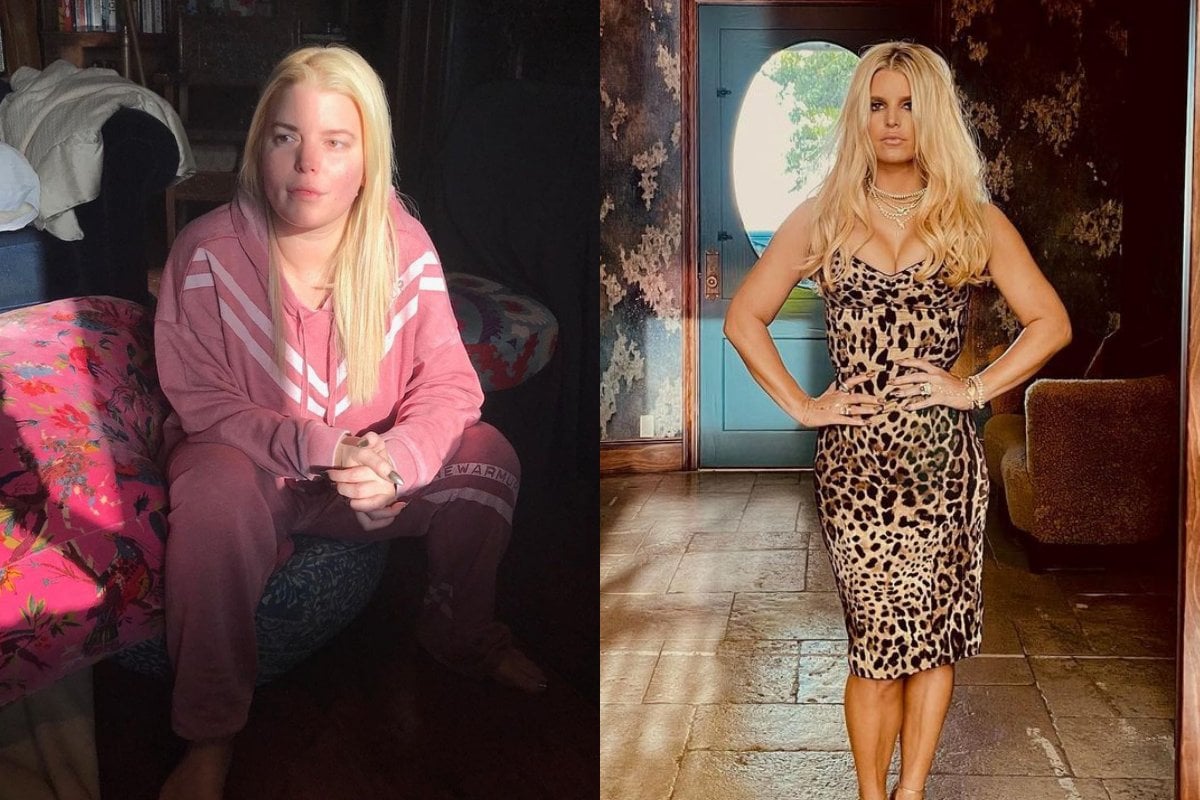 This post discusses alcohol addiction and sexual abuse. It will be triggering to some readers.

It was Halloween 2017 when Jessica Simpson hit rock bottom. She was so drunk that she couldn’t even help her excited children get into their costumes for a Halloween party at their house.

"I was terrified of letting them see me in that shape," Simpson wrote in her memoir Open Book. "I am ashamed to say that I don't know who got them into their costumes that night."

Watch: Jessica and Nick were the one of the most publicised couples of the early 2000s. Here are some other celebrity pairings you may have forgotten about. Post continues after video.

The morning after that rock-bottom moment, Simpson took a photo of herself, wearing a pink tracksuit, makeup-free and looking like she’d been crying. She’s now posted that photo on Instagram to mark four years of being sober.

Simpson has been in the public eye since she released her debut album in her teens, going on to superstardom when she and then-husband Nick Lachey made the reality series Newlyweds. But while she was playing up the ditsy blonde image, there was a lot she was keeping hidden. 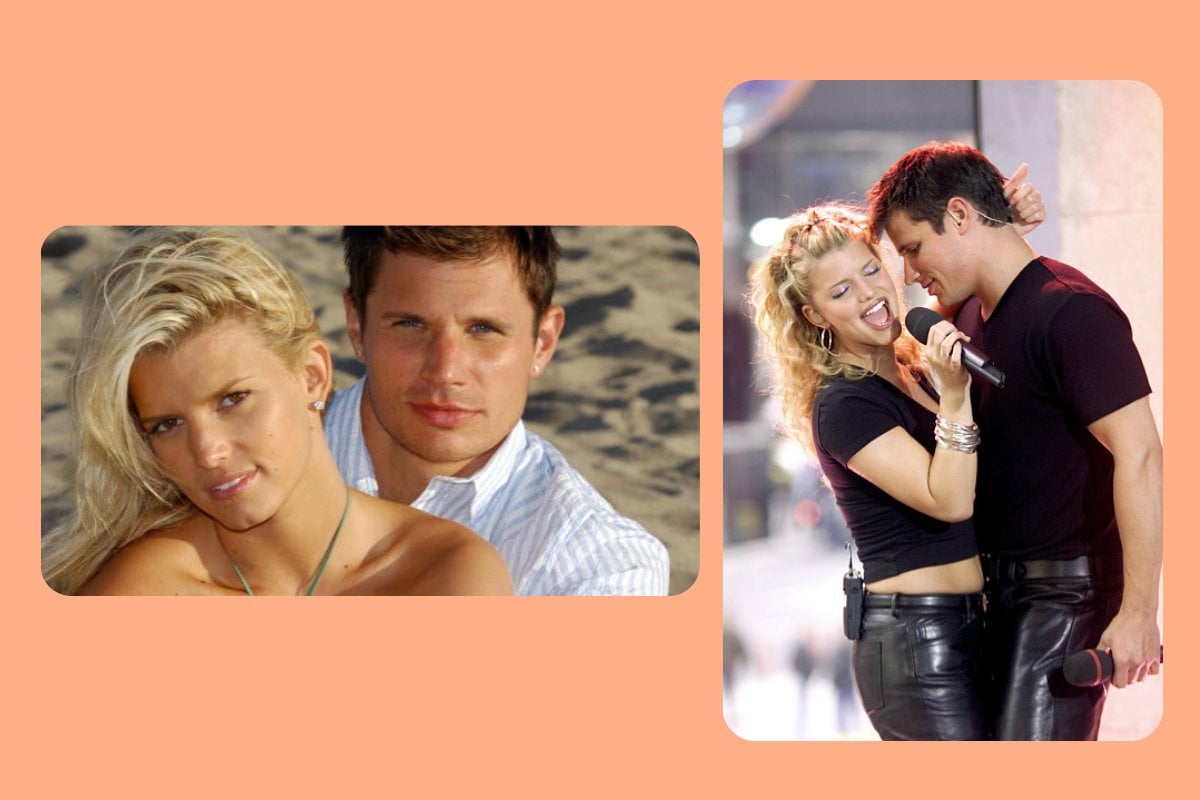 Simpson revealed in 2020 that she was sexually abused from the age of six by the daughter of a family friend, who she would sometimes share a bed with.

“It would start with tickling my back and then go into things that were extremely uncomfortable,” she wrote in Open Book. “I was the victim but somehow I felt in the wrong.”

It took six years for Simpson to tell her parents about what was going on. She says her family never stayed at the friends’ house again, but her parents never said any more to her about the abuse.

Simpson says that as she got older, the emotional pain of the abuse, along with career stresses, led her to self-medicate with alcohol and stimulants.

“I was killing myself with all the drinking and pills,” she wrote.

Things got really bad when Simpson was married to footballer Eric Johnson and they had daughter Maxwell in 2012 and son Ace the following year. She had been struggling with body image since she was told to lose weight as a 17-year-old, and had been on diet pills ever since.

But after having two babies, she was so ashamed of her body that she wouldn’t have sex without a t-shirt on. She wouldn’t even shower naked because she couldn’t bear to look at herself.

"That was after I lost a ton of weight and I had skin and stretch marks because I had two babies back-to-back, 14 months apart," she told ET.

Simpson wanted a tummy tuck, but her doctor was concerned about the state of her liver due to excessive drinking.

“You could die,” the doctor told her.

Simpson told her husband Johnson what the doctor had said.

“We were in a sort of shared spiral, both of us in denial about how much we were drinking," she wrote.

"I’m sure we were wasted when we talked about it."

She had the surgery, and then, when she still wasn’t happy with how she looked, she had a second surgery. She suffered a serious infection, but pulled through.

In May 2017, Simpson appeared on The Ellen DeGeneres Show under the influence of alcohol.

“I can’t even watch the interview,” she would go on to tell Today. “I had started a spiral and I couldn’t catch up with myself… and that was with alcohol.”

Then came Halloween. Simpson and Johnson took Maxwell to school for an assembly.

Simpson and Johnson spent the day getting ready for the Halloween party at their house. But by the time the kids were ready to get into their costumes, Simpson didn’t feel she was in a fit state to help them.

That night, she took a sleeping pill and went to bed.

“I slept in, afraid to see them, afraid I had failed them. I hid until they left, then drank.”

Simpson’s friends came around to see her, and she told them she was quitting drinking.

She had the support of her friends and her parents, as well as her doctors. She started doing therapy twice a week, dealing with her anxieties and the trauma of her sexual abuse.

“I had room for so many wonderful moments that I would have missed: sober for the first time in my studio and seeing Maxwell grab a guitar. Ace in pyjamas he put on himself, proudly adding a sticker to his bedtime chart.”

In March this year, Simpson said she didn’t even consider touching alcohol during lockdown.

"Eric and I both, we look at each other like, 'Woah. We could not have drunk through this,'" she said on the Tamron Hall show.

She said for her, sobriety was more of a psychological challenge than a physical one.

“It’s weird because alcohol was an easy thing for me to give up. It was holding onto how I romanticised the pain I liked to hold on to.”

Simpson, now also mum to Birdie, says in her latest Instagram post that the photo of herself taken in the early morning of November 1, 2017, is an “unrecognisable” version of herself.

“I knew in this very moment I would allow myself to take back my light, show victory over my internal battle of self-respect, and brave this world with piercing clarity,” she writes.

“The real work that needed to be done in my life was to actually accept failure, pain, brokenness, and self-sabotage. The drinking wasn’t the issue. I was. I didn’t love myself. I didn’t respect my own power. Today I do.”