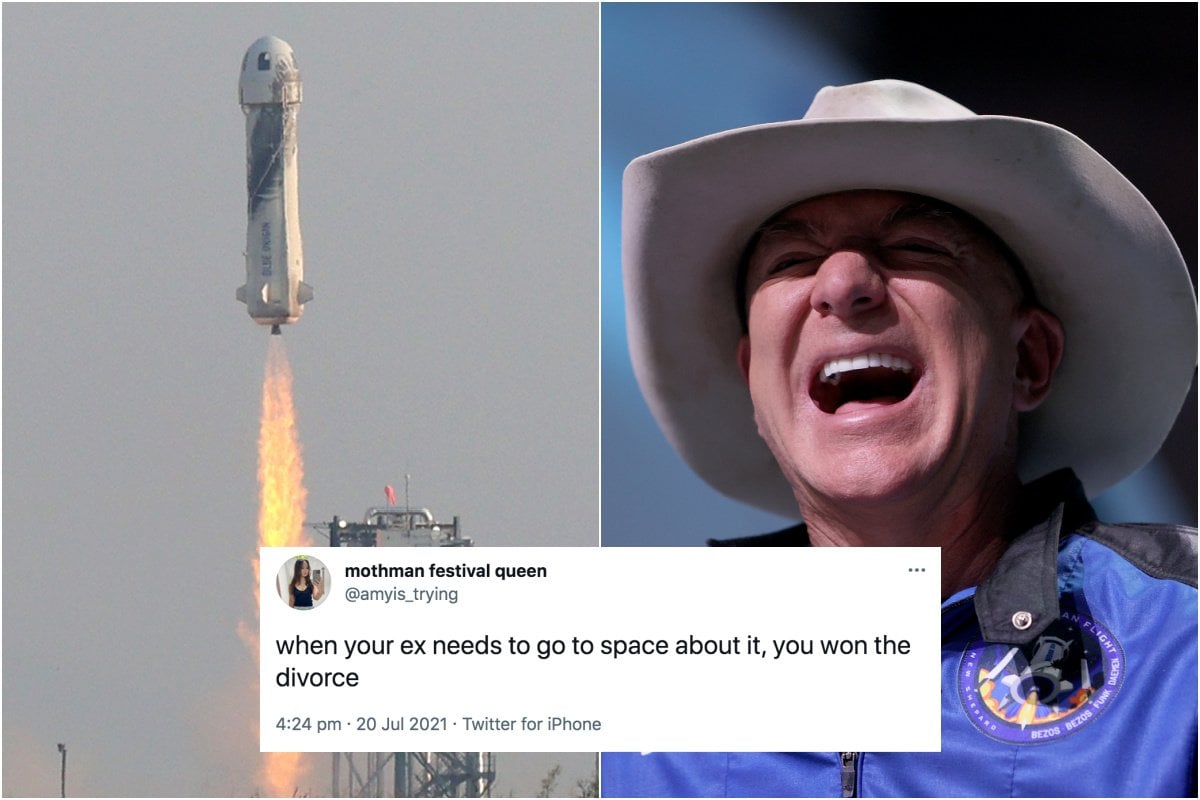 "Who wants a skittle?"

With the curve of the earth below them and on the edge of space, the richest man on earth threw lollies into his crewmates' mouths during their four-minute visit to space.

In case you missed it, overnight Amazon founder Jeff Bezos went to space. He was joined by his brother Mark, as well as the oldest person to ever go to space, 82-year-old former pilot Wally Funk, and the youngest, 18-year-old Oliver Daemen - whose father bought him a ticket.

Bezos and other entrepreneurs including UK billionaire Richard Branson intend to start a market in space tourism, boasting the spectacular views of earth. You know, so the average folk can go.

The New Shepard went more than 100km above the earth, over the Karman Line space boundary.

Here's how the internet is reacting...

when your ex needs to go to space about it, you won the divorce

Imagine if billionaires invested this much time and money in preserving the planet we're already on...

Jeff Bezos is back already? Was space closed?

if you close your eyes and press on them, that's what space looks like and you've saved yourself millions of dollars

this mf went to the foyer of space

Imagine your in space and you really want iced coffee.. not worth it

When Jeff Bezos gets back from space, can someone ask him if he happened to see the ten rolls of toilet paper up there that I ordered a year ago and never received?

and? JoJo was only 13 when she released Leave (Get Out) https://t.co/KwL5TKgqCZ

Saying you went to space for ten minutes is the same as claiming you visited a city where you had a two hour layover and never left the airport.

Neil Armstrong in space: "That's one small step for man, one giant leap for mankind."

Jeff Bezos got divorced because he wanted some space?

Jeff Bezos was in space for 5 minutes—or as its known at the Amazon warehouse, your allotted break time for a 16-hour day

Congrats to Jeff Bezos on his successful rocket launch. And also for totally not overcompensating for something pic.twitter.com/fI3OMxiaVQ

I just logged on and apparently Bezos rode a big dick into space? Is that about right?

Reply
Upvote
How is it that this man is allowed to go into space when he keeps workers in modern slavery conditions? Let's imprison him, take his money and end homelessness in the US. Or vaccinate the third world. Develop carbon neutral energy, feed the starving children in Syria.... literally anything except vanity flights for billionaires.
L
laura__palmer 6 months ago

Reply
Upvote
@cat What is absolutely disgusting is that his business model is legal. I  find this obscene.
M
michael 6 months ago

Reply
Upvote
1 upvotes
@laura__palmer What paying employees who chose to work at a company he owns should be illegal? Nobody is forcing people to work at Amazon.
C
cat 6 months ago

Reply
Upvote
1 upvotes
@laura__palmer I guess in some ways he's just innovated by keeping the slave labourers in the US, rather than off-shoring to other countries.
C
cat 6 months ago

Reply
Upvote
1 upvotes
@michael many, many people are being forced to work at Amazon. You don't have to have a gun to your head to be forced to do something. There are far subtler and far more effective ways, like bribing the state government into changing the labour laws.
A
anonymous 6 months ago

Reply
Upvote
2 upvotes
Pity he couldn't spend the money on paying and improving the working conditions of his workers. What an absolute scumbag.