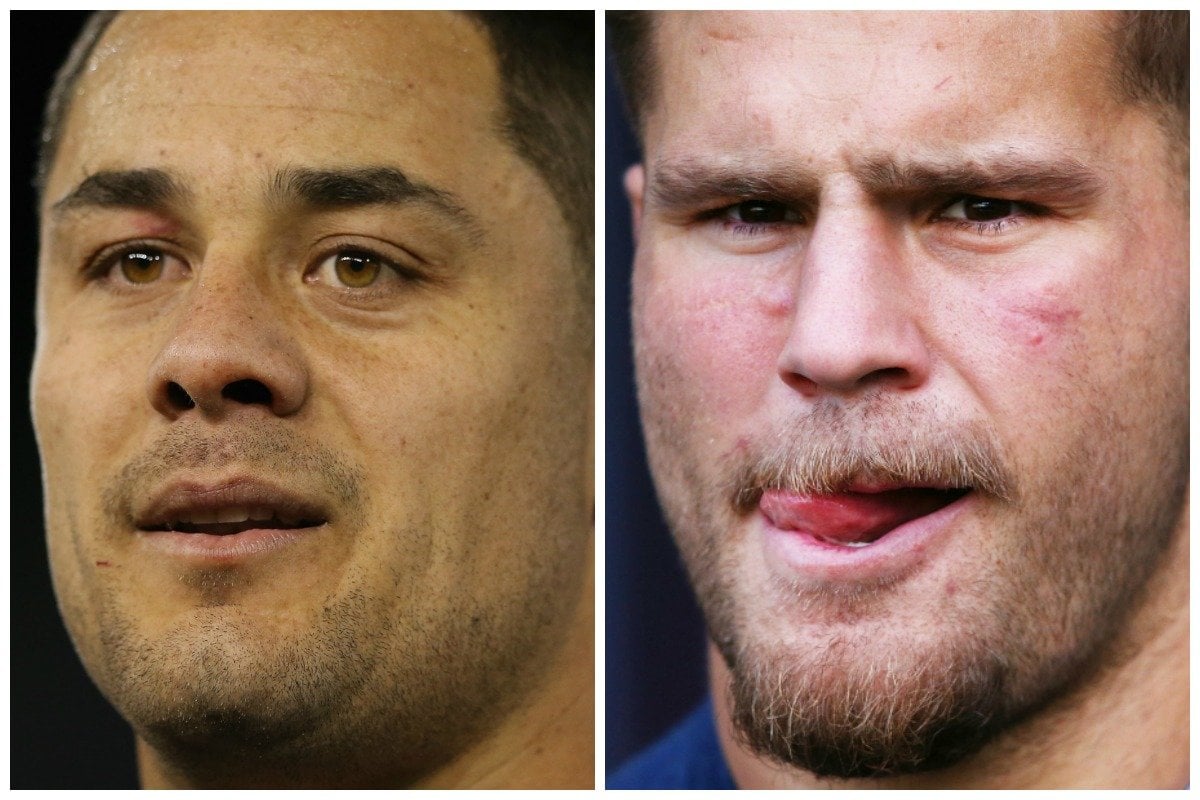 Content warning: this post deals with sexual assault and might be triggering for some readers. If you or someone you know is impacted by sexual assault, domestic or family violence and abuse, you can call 1800RESPECT (1800 737 732) at any time.

When former NRL player Jarryd Hayne left the home of an unnamed 28-year-old woman on September 30, 2018, she was bleeding.

She says it was rape.

He says it was an accident.

No one is denying there was blood.

When an unnamed 19-year-old woman left former NRL players Jack de Belin and Callan Sinclair on December 9, 2018, she sent a Snapchat message to a friend. It read "help".

In the aftermath, De Belin sent a series of texts to friends and family. He said, "me and my mate went back to my cousin's house and had a bung [sic], just a typical, standard..."

A 'bun' refers to group sex.

"The only time was as at the end of it, she got a bit weird and said, 'You've got a girlfriend'."

De Belin did have a girlfriend. A girlfriend who was heavily pregnant at the time.

The woman who asked for help spoke to a number of people before making the decision to file a formal police statement and agreeing to a medical examination on the afternoon following the incident.

She says it was rape.

He says it was a mistake.

But no one is denying a man cheated on his pregnant girlfriend.

No one is denying a 'bun' took place in someone's cousin's house between two nightclubs.

De Belin insists she never said no. She says she did.

"There was no verbal or physical resistance, it was just normal, Mum. I just can't believe it," de Belin said in a text message.

And therein lies the problem.

Normal sex shouldn't leave a woman feeling distressed. Again, no one is denying she was upset after the incident.

If his text messages and phone conversations are anything to go by, none of that bothered him.

"I'm not too worried... I'm going to get off, it's just that my image is tarnished, like my missus as well is f**ken pregnant," he said to a friend over the phone.

Of course, that is not to say whether or not what happened to this woman is rape. I do not get to decide. A court does that. But I know what good, 'normal' sex looks like. And these men aren't having it.

Twenty minutes after Hayne left that woman in Fletcher, she sent him a series of text messages. One said, "I am hurting so much".

Another read, "I know I have talked about sex and all that but I didn’t want to do that."

She went to the doctor three days after the incident and was told the injury "looks like a bite". The doctor allegedly encouraged her to report what had happened.

When Hayne arrived at her Fletcher home that night at 9pm, he was dropped off by a taxi. He had come from New Lambton. He asked the female taxi driver to wait 20 minutes while he "pick[ed] up a bag" inside.

The woman says Hayne, who she had never met before, was clearly intoxicated and acting strangely. According to her testimony, whatever 'flirting' had taken place previously, she did not want to have sex with the man who arrived.

She says it was rough, alleging he pushed her face down and "pulled my clothes off". He says whatever happened was consensual.

Hayne arriving at a woman's home intoxicated, with a taxi waiting out the front while he 'grabbed something', was never going to be conducive to good sex.

We demand women be gatekeepers not only of their own sexuality, but of men's too. We tell women to keep their wits about them. Don't drink too much or wear a skirt too short or invite a man into your home or send him sexy photographs. Don't smile at him or get into a car with him or let him kiss you unless you're consenting to absolutely everything that could potentially happen afterwards.

But heterosexual encounters are shared. And men need to take some ownership.

Hayne, de Belin and too many other professional NRL players to count, need to learn what sex is actually meant to look like.

She shouldn't message a friend the word "help".

She shouldn't tell you afterwards that it wasn't what she wanted. That you crossed a line.

She shouldn't believe - regardless of what a court says - that what happened to her was rape.

Most of all, after you have sex with a woman, she shouldn't be upset about it.

When it comes to Hayne and de Belin, two courtrooms will deliver a verdict. They will decide if what happened was sex or rape.

Regardless of what that verdicts are, we ought to look closely at what happened on those two nights, a few months apart.

What was ever in it for the women? Where was their pleasure? Why were they receptacles - acts done to them rather than with them?

Reply
Upvote
2 upvotes
Reading about stuff like this makes me feel sick and it's so sad. I hope those women get the justice they deserve.
grumpier monster 2 months ago