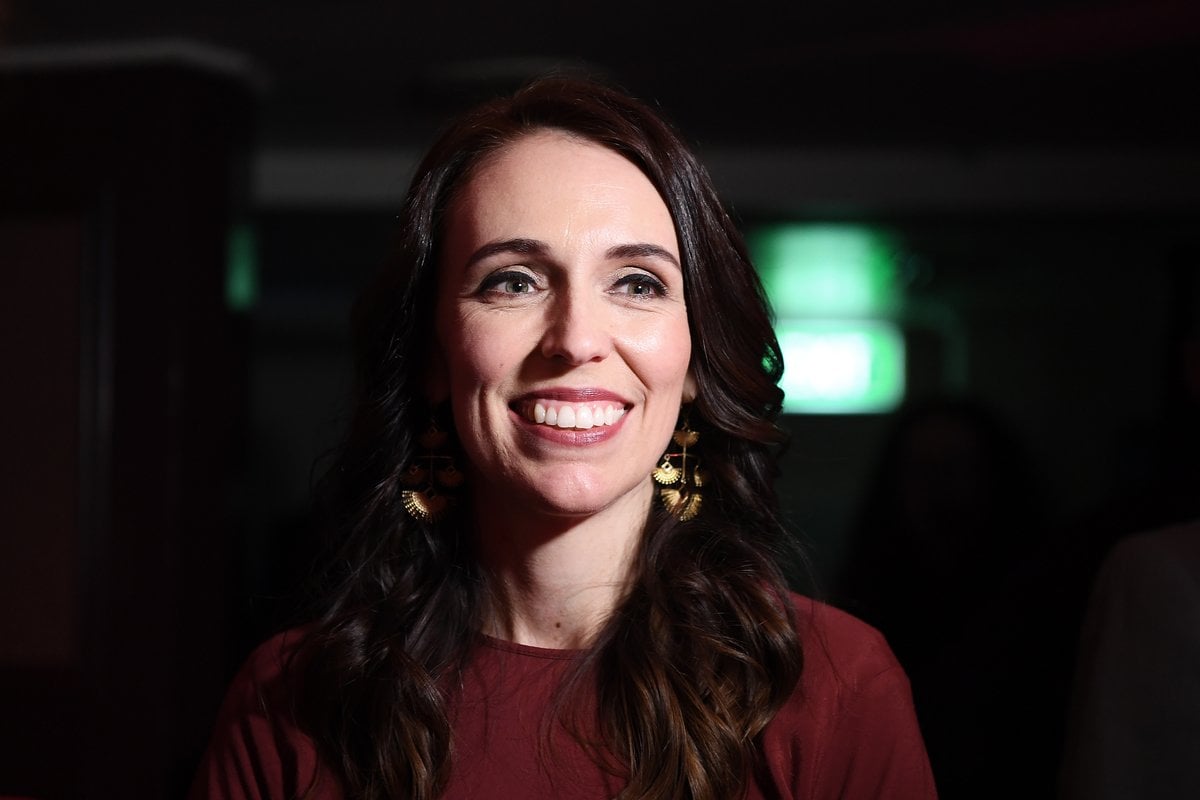 Only three hours after the polls closed on Saturday, Prime Minister Jacinda Ardern had secured a landslide victory in New Zealand's federal election.

By the media and spectators alike, this election was seen as a referendum on - most particularly - Ardern’s personal leadership since 2017, when she stepped into the role of Prime Minister.

The result of the so-called referendum? Overwhelmingly in her favour.

Listen to Mia, Holly and Jessie discuss all things Jacinda on Mamamia Out Loud. Post continues after podcast.

As Ardern pointed out in her acceptance speech, the 40-year-old received a significant number of votes from people "who may not have supported Labour before" and thanked New Zealanders for showing "the Labour Party its greatest support in at least 50 years".

"We will be a party who governs for every New Zealander," she promised.

Ardern went on to say she hopes to lead a united country, in a divided world.

"We are living in an increasingly polarised world, a place where more and more people have lost the ability to see one another's point of view. I hope that this election, New Zealand has shown that this is not who we are. That as a nation, we can listen and we can debate." 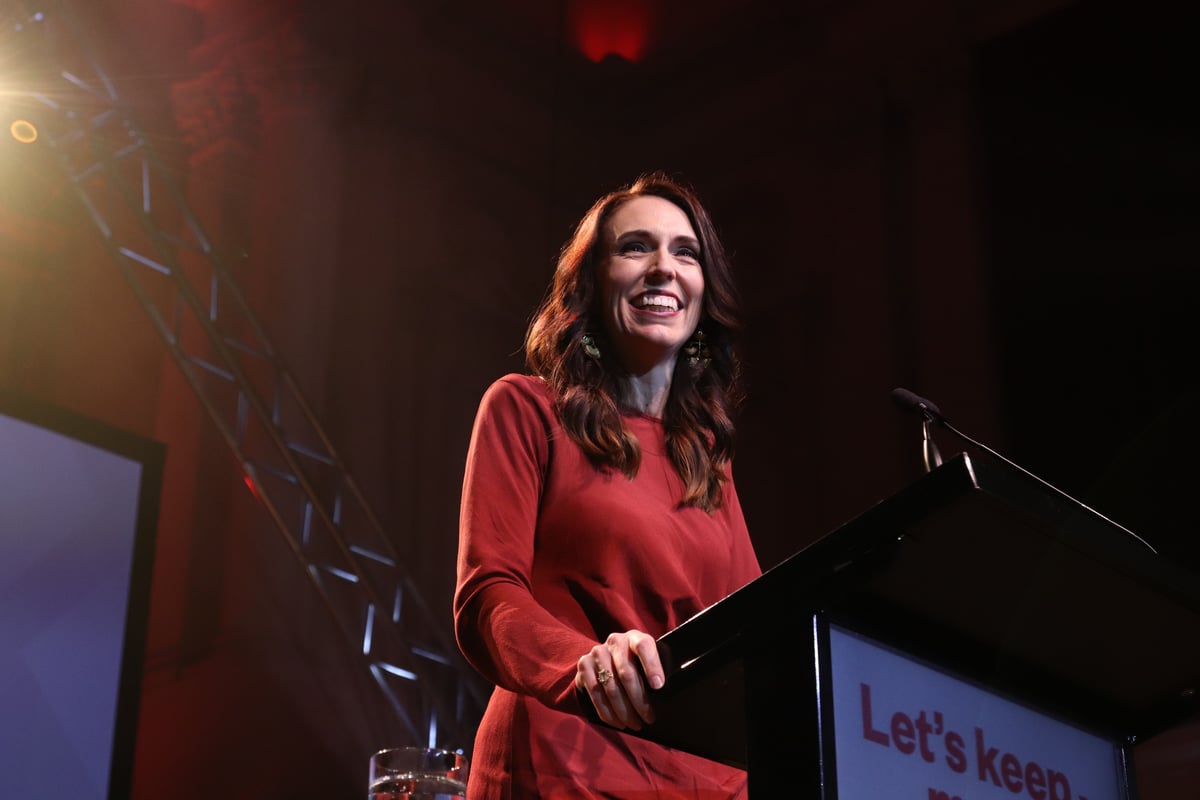 New Zealand Prime Minister Jacinda Ardern delivers her victory speech after being re-elected in a historic landslide win on October 17, 2020 in Auckland, New Zealand. Image: Getty.  During Ardern’s three-year term, she has led New Zealand through immeasurable grief after their worst mass shooting, a deadly volcanic eruption, and the ongoing global pandemic.

Not to mention - Ardern has done this all whilst having a daughter in diapers at home. Yes, during her first term, she became the second elected leader in modern history to give birth while in office. In June 2018, she and her partner Clarke Gayford welcomed their first child, Neve Te Aroha Ardern Gayford.

Throughout her first term, Ardern displayed an unconventional leadership style - one of compassion and conviction. Her focus - at all twists, tumbles and turns - has been empathy.

In an interview with The Guardian, she summarised her thoughts on her empathetic leadership style.

“We need our leaders to be able to empathise with the circumstances of others; to empathise with the next generation that we’re making decisions on behalf of. And if we focus only on being seen to be the strongest, most powerful person in the room, then I think we lose what we’re meant to be here for. So I’m proudly focused on empathy, because you can be both empathetic and strong.”

Certainly, it's not a style everyone has agreed with.

As she told The New York Times: "One of the criticisms I’ve faced over the years is that I’m not aggressive enough or assertive enough or maybe somehow, because I’m empathetic, it means I’m weak."

“I totally rebel against that. I refuse to believe that you cannot be both compassionate and strong.

The world witnessed and admired Ardern’s empathy during the Christchurch massacre in March, 2019. On what has been described as “New Zealand’s darkest day,” an Australian man opened fire targeting two mosques in Christchurch, where Muslims were gathering for their afternoon prayer. He killed 51 people.

In less than 24 hours, Ardern was on the ground in Christchurch, wearing a black headscarf as a sign of respect, and wrapping her arms around mourners and members of the Muslim community. In footage from her meetings, she comforts devastated men and women, closing her eyes as she hears their words and feels their grief. 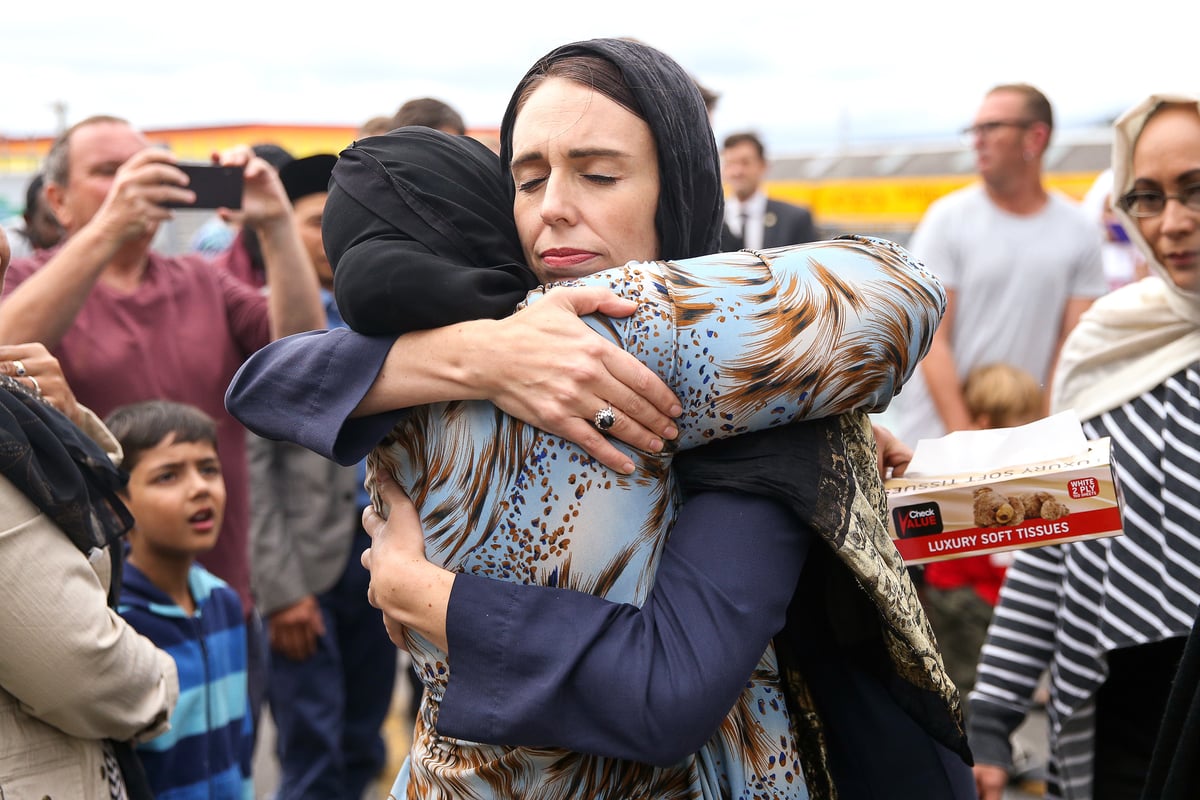 She was a leader who felt the tragedy as a human first, and a politician second. Those who were there said they were struck by her humanity.

“She was engaged, she was concerned, she knew what to say. She is the Prime Minister of New Zealand, but they felt she was there with them and that nobody else mattered,” said one woman, Sarah Ahmed, speaking to The Sydney Morning Herald.

Ten months later, another catastrophe occurred. Once again, New Zealanders sought the guidance of their Prime Minister to hold their collective hand through the country’s grief.

On December 9, just weeks before Christmas, New Zealand’s White Island volcano erupted. Of the 47 people who were on the island at the time, 21 were killed.

Within 24 hours, Ardern was meeting and hugging the emergency services personnel who were first to respond to the White Island eruption. A week later, the Prime Minister led a nationwide minute of silence to honour the victims of the fatal explosion.

Again, the world looked on and praised the Prime Minister for her compassionate and caring response.

Some may think this is merely a photo op, however at least coupled with her as a person, I find this more than believable. It's genuine, true care. Again, no politician is perfect but if there has ever been one that's human and truly true, it is Jacinda Ardern. I am proud. pic.twitter.com/rmsUtA0Eva

Mere months after that, another once-in-a-century crisis emerged: a global pandemic. Ardern was remarkably swift with introducing ‘stay-at-home’ restrictions.

After announcing lockdown, she jumped on to a Facebook live with her followers to "check in with everyone as we prepare to hunker down for a few weeks".

"Excuse the casual attire, it can be a messy business putting toddlers to bed so I'm not in my work clothes," she told watchers, before answering their questions about the restrictions she had imposed.

As a result of her quick reaction, New Zealand largely avoided the case numbers seen elsewhere, including in Australia, and the World Health Organisation praised the government for their response, holding them up as an example to other countries.

Plus, in solidarity with those who had been financially impacted by the pandemic, Ardern announced in April she would take a 20 per cent pay cut to her salary.

For the third time in one year, Ardern's compassion for the crisis being weathered by her country was praised by those not just in New Zealand, but abroad too.

And on Saturday, millions of New Zealanders took to the polls to re-elect Ardern, voting in favour of her empathetic leadership style.

Reply
Upvote
The New Zealand economy is in a perilous state and ‘empathy’ isn’t going to fix that.
While socialism’s great in theory, it doesn’t work in practice because, as a famous female prime minister once said words to the effect of:  ‘Socialisms all very well, but sooner or later, you run out of other people’s money.’
laura__palmer 6 months ago

Reply
Upvote
5 upvotes
@birdie all economies are in a perilous state. Can you point to a conservative government that is doing any better during this time?
cat 6 months ago

Reply
Upvote
2 upvotes
@birdie New Zealand is a capitalist democracy, so theories about ‘socialism’ aren’t particularly useful. Recognised economic strategies to come out of a depression are though, which is why they’re investing in social programs and major works. Ardern’s empathy isn’t a barrier to economic or political leadership, it’s possible to be emotionally intelligent and get things done.
mamamia-user-482898552 6 months ago

Reply
Upvote
3 upvotes
One would hope that NZ elects its leaders on more than just good optics and the fact the PM hugs people. Just once, I'd like to read an article on the actual policies of Ardern's government, rather than a discussion about her personality and home life.
cat 6 months ago

Reply
Upvote
3 upvotes
@mamamia-user-482898552 I’m pretty sure the Covid response counts as a policy. As did the changes to gun laws after the massacre, the stimulus package and their economic recovery strategies. If all you see are hugs then that’s all you’re focusing on.
mamamia-user-482898552 6 months ago

Reply
Upvote
1 upvotes
@cat I haven't read any articles that focus on these things - that's my point. Articles and your average Joe preferentially focus on the hugs and optics. Most non-NZ folk who profess to loving Ardern would be hard-pressed to actually detail any hard details about what her party has done and what policies they have put forward.
cat 6 months ago

Reply
Upvote
1 upvotes
@cat I ask non-NZ folk why they like Ardern when she comes up in conversation. So far, 100% of the time, it boils down to optics rather than knowing any real detail about her policies. Similarly, the majority of stories written about her outside of the NZ press - including this one - focus on personality, not policy. I shouldn't have to go looking for meaningful commentary about a political leader - her political platform should not be obscured by her optics to the point of it being hard to identify what she and her party stand for. The fact that you keep citing gun control and COVID response, rather than her many other domestic and international policies, suggest they aren't front-and-centre on your radar either. Crisis management is all well and good, but after the dust settles, it takes more than response strategies to extraordinary conditions and hugs to govern a country.
News
General
Opinion
True Crime
Politics
Sport
Explainer
Entertainment
Celebrity
Reality TV
Movies
TV
Books
Rogue
Royal
Lifestyle
Beauty
Fashion
Weddings
Home
Wellness
Health
Fitness
Travel
Food
Parents
Before The Bump
Pregnancy
Baby
Kids
Teens
School
Parent Opinion
Work & Money
Money
Finance
Career
Lady Startup
Relationships
Sex
Dating
Separation
Friendship
Family
Real Life
Couples