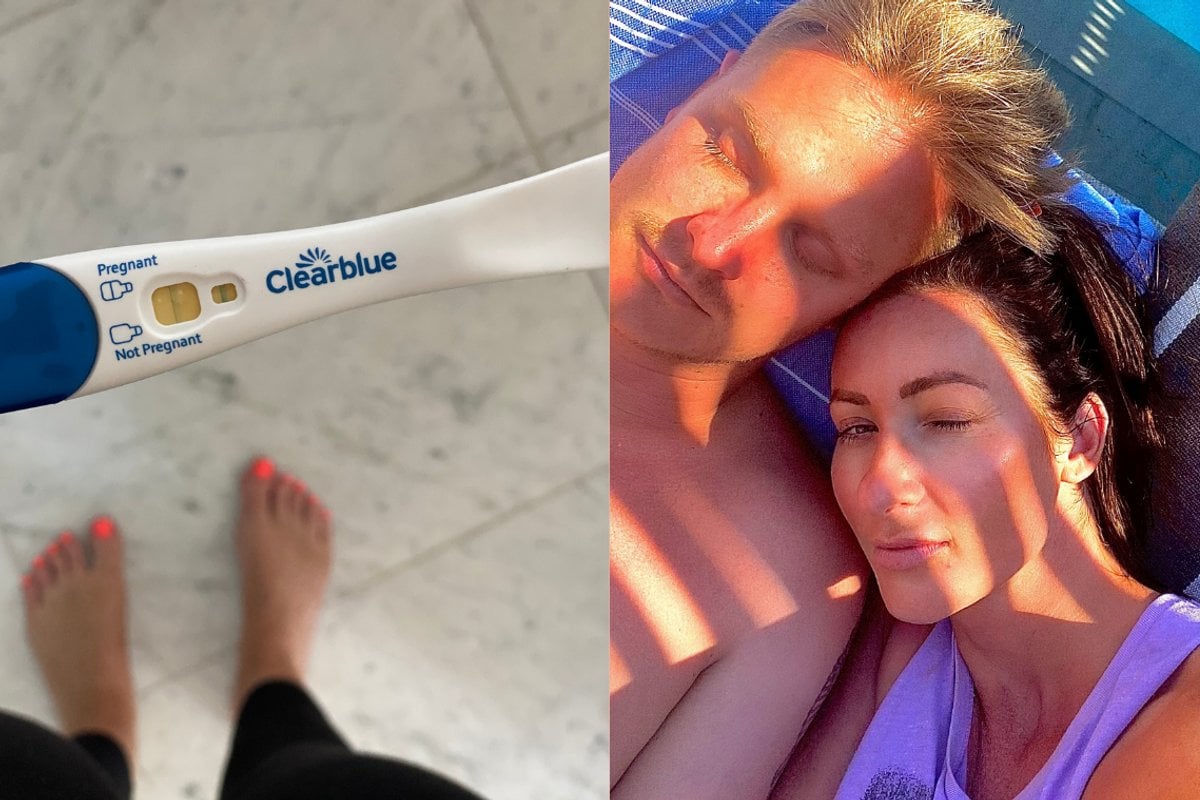 This post discusses miscarriage and may be triggering for some readers.

When the second pink line appeared on the stick, my stomach dropped.

When I handed the positive pregnancy test to my fiance Alex, his reaction was reassuring. His face beamed with disbelief and love. His excitement was paired with a strong sense of readiness.

Why didn’t I feel this way?

Watch: A tribute to the babies we've lost. Post continues after video.

My head was spinning with anxiety, which is a classic default reaction when I’m feeling out of control. The constant reel of unresolved thoughts became overwhelming, and I felt guilty for having them. I wasn't at my ideal weight and fitness level. I wanted to travel with a partner I’d met during lockdown. I wanted another baby, absolutely, but hadn’t intended for it to happen so soon.

Insomnia kicked in with endless Googling on the really important things: ‘Can I have laser hair removal whilst pregnant?’ 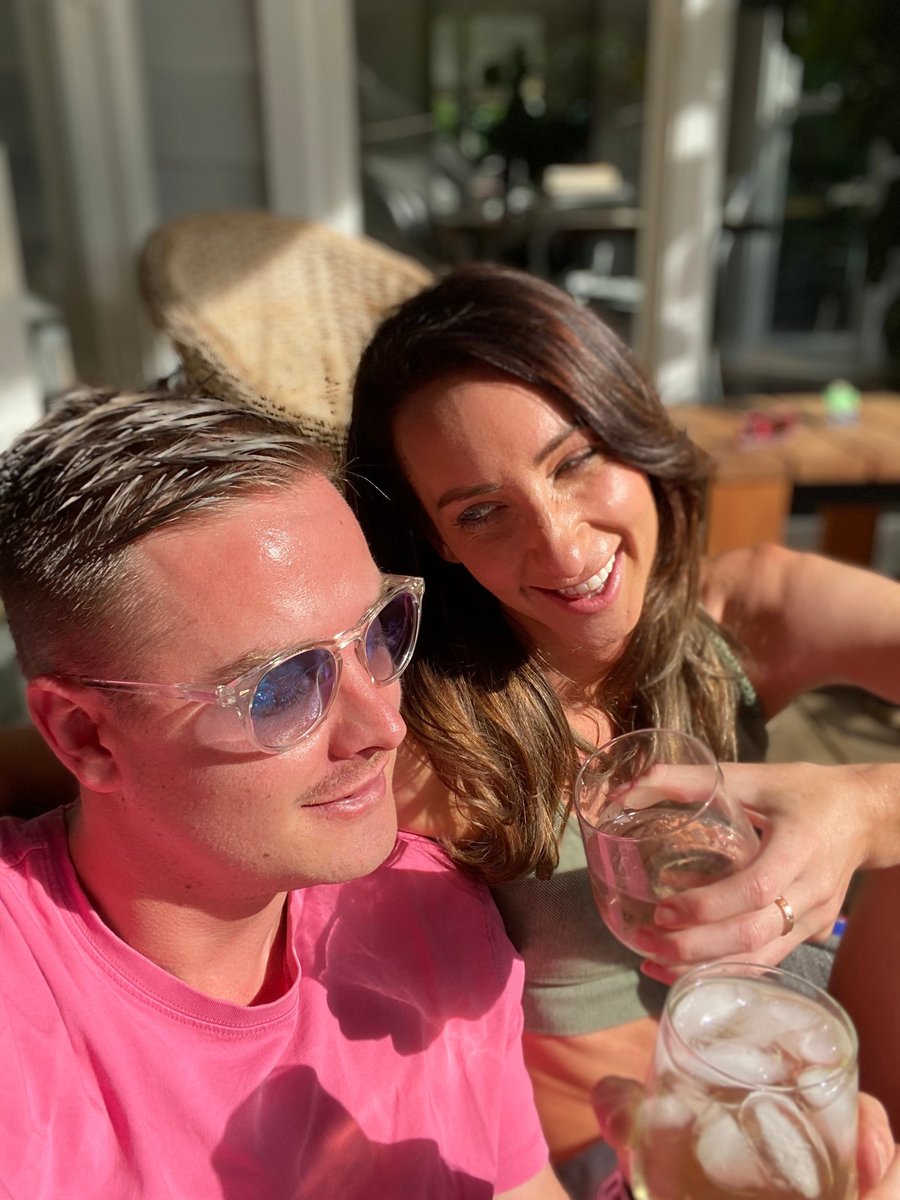 We had a wedding planned for a few months ahead and Melbourne’s lockdown was about to be lifted, with social plans consisting of eating and boozing filling the calendar. There was really no room for a pregnancy.

We rang our parents, who were over the moon, and then our beloved friends. Each time I said the words ‘I’m pregnant’ it became a little more real, and I slowly began to get used to it. Our people were happy for us and swept us up into a future welcoming a new baby into our lives.

I’ve never bought into the whole ‘wait 12 weeks to share the news of a pregnancy.’

Both my Mum and Grandma suffered miscarriages and telling people was not the done thing in their day. They suffered silently and got on with life like nothing had ever happened.

For me, I believe that sharing such a pivotal time with your loved ones comes with sharing whatever road it takes. A road where you are not alone.

In the circle of ‘loved ones’ we shared our pregnancy with, my son was included. He’s seven and I love that we’ve sown a relationship where honesty is encouraged in a trusted way. Look, it didn’t go as expected... He burst into tears, pulling the blanket over his head screaming "I’m not ready for a baby!!!"

My son wasn’t the only one who seemed to be picking up on my non-verbal cues. Alex could sense my apprehension and when he questioned me, I was upfront and honest. I explained that I was scared. I’d had a baby before and I knew all too well how hard it can be. Most of the dramatic changes happen to the woman; it's a big deal.

Last time around it took me so long to get my overall health back and to feel like myself again emotionally. As a single mother for most of my experience with mothering, the thought of being abandoned or rejected as a woman after birthing a child is a big trigger for me.

Getting it all off my chest felt a lot better. Alex and I started to talk about all the positives. He reassured me that we made a great team in all aspects of our lives, that we would be fully supported by both our families and he was committed to me and our growing family.

After a few weeks, I was getting my head around things. I’d moved through fear and into acceptance. I believed that I was exactly where I was meant to be. Pregnant with my second baby.

As the nausea eased, I was feeling great. My boobs were enormous, tick. My skin was clear and glowing, tick. And my cyclical mood swings were gone. Heaven.

I ordered beautiful summer maternity clothes and downloaded the app to track the baby’s development. My son was moving through it all too, saying he wanted to clear out his bookshelf to move the ‘baby’ ones into the baby’s room. Wondering if he could put in an order for a boy/girl?

I was there. I wanted our baby. I didn’t care about its impact on the wedding or my weight. I was having a baby with a beautiful man who loved me and my son and we were so excited.

Then, one morning, the spot of blood came. My stomach dropped, just as it had weeks earlier. I tried to go about my day, and not panic, but the cramps got worse and the blood kept coming. I had no idea what to do. I called my doctor and ended up in her room getting an internal scan.

Not only was there no heartbeat, there was no tiny little dot on the screen, representing the start of a little life and the expansion of our family. It was gone.

Alex and I walked out and got into the car in silence, shocked and shattered.

What the actual f**k? I felt like I was on a rollercoaster and I had been jolted off violently, without seeing the end coming. How was this fair? I’d just got my head around becoming a mother again and now I wasn't.

I quickly realised on the drive home that Alex was simultaneously in a state of grief, blame and confusion. He knew nothing about how and why miscarriage happens. And because of this lack of experience, I suddenly felt very alone. Even though we were in the fire together, it felt like unfamiliar territory to support one another.

But life would have it that this was the road we were on and so, with broken hearts, we told our people we’d had a miscarriage. 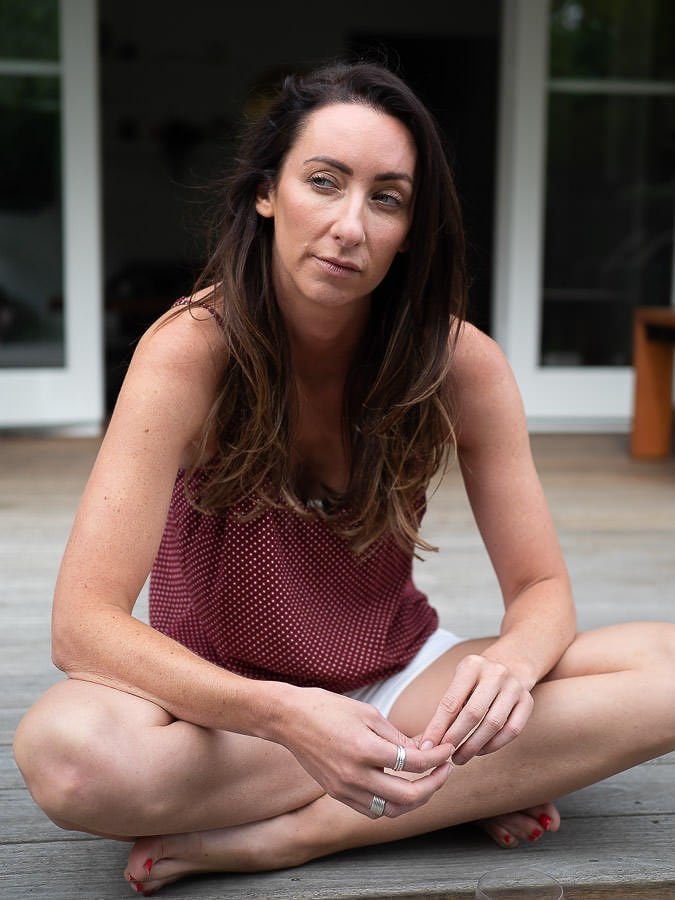 I turned inwards, nurturing myself through what seemed like the longest, most painful period I'd ever experienced. Our phones lit up with messages and calls and even beautiful care packages. One special book in particular called Heart Space; a grief workbook for women after the loss of a child or pregnancy.

It was like the book knew exactly what I needed.

Even though I ignored everyone while I slept for days and cried into Alex’s chest, I didn’t feel alone anymore. I felt strongly held, loved and supported by my people.

Looking back at this time, I think it was important for us to give ourselves space and time to grieve but during this process I noticed both of our moods were spiralling into a deep depression. I felt no motivation to get up or do anything in life anymore. Grieving a loss whilst also trying to be a mother is a juggling act, but I chose not to act and instead be honest.

I told my son, gently, that the baby wasn’t in my tummy anymore and his little face dropped with disappointment. "Well, I guess clearing out my bookshelf was a waste of my time then," he replied, which made us both erupt in giggles through the tears.

It was these little breaks of sunlight that slowly broke through the dark mini depression.

I connected back in with my psychologist and my support team. When I finally stopped bleeding, Alex surprised me with a couples' massage. I think it was his attempt to bring me back to myself and to him. That massage was the most healing and physically transformative experience - just what I needed. I felt like me again and intensely connected to Alex in a new way. I felt ready to step out and reconnect to my village. A village where people understood why I’d gone MIA or hadn’t responded to texts.

We didn’t cancel our weekend plans, instead we had our friends and their kids over for lunch. I had countless long hugs from men and women along with taps on the shoulder checking in to see if I was "ok?" They all brought food, people were stacking our dishwasher, sleeves rolled up, all helping. They told me, "sit down here and I’ll fill up your wine". I felt totally cared for and had an overwhelming sense of the "village".

Listen to Mia Freedman's interview with Bec Sparrow as they discuss work, an interstate move, more children, another miscarriage, and the many ups and downs of life. Post continues after audio.

It’s what I would wish for every woman who had just been through what we had rather than processing it alone.

But what was really interesting was the number of women who shared their own miscarriages. I realised that it’s just not spoken openly enough and the more we share our experiences, the less taboo it will become.

Miscarriage isn’t shameful; I didn’t do anything wrong and as a friend of mine explained, the way she processed her own miscarriage was that it was nature’s way of looking after me: letting go of something that wasn’t developing properly.

I think we also need to remember our partners: even though it’s us who miscarry, they are grieving too, and it warmed my heart to see Alex’s mates support him when I was unable to. I would also love to see more resources and education directed towards men, or the partner who isn’t carrying the baby. Most of the focus is directed at the mother, but she’s not the only one who has hopes, dreams and deep feelings invested in the developing baby.

My heart will always be heavy for the baby that we never had. And I also now feel a part of a large community of women who have experienced miscarriage. My one wish? That we never have to suffer alone.