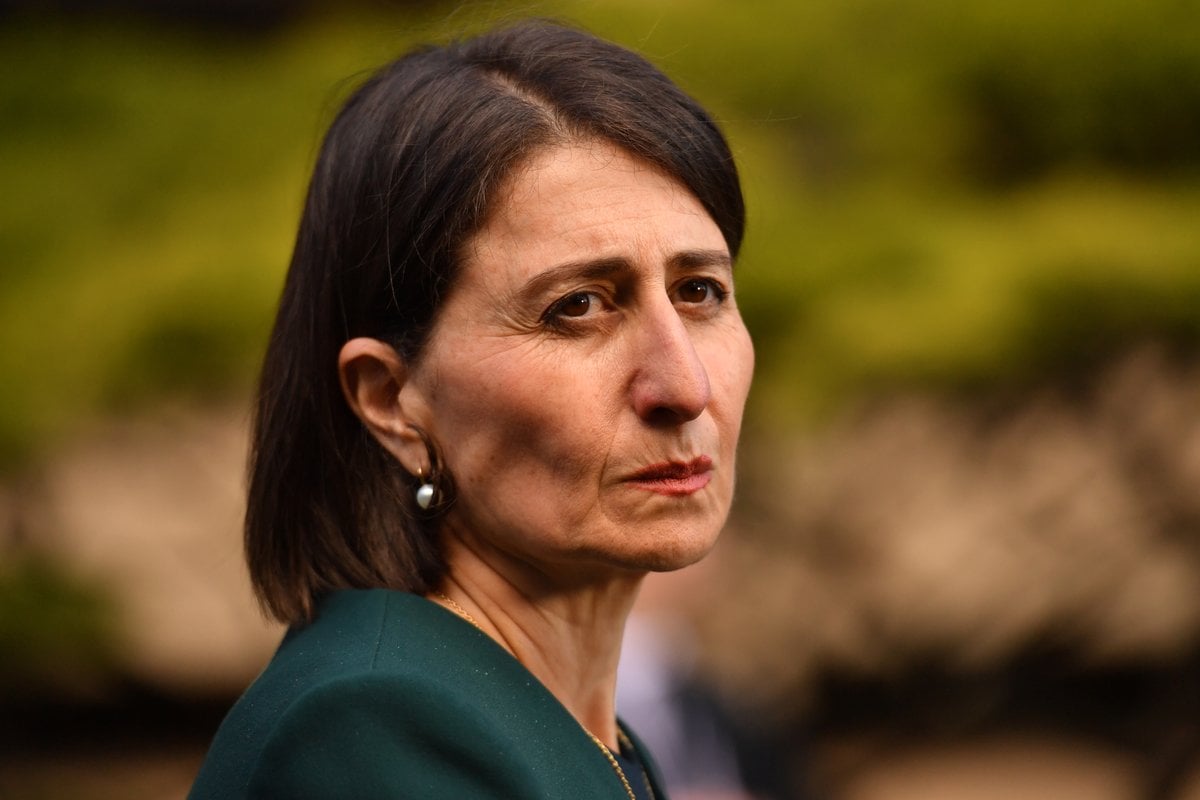 It's been over a week since NSW's anti-corruption watchdog kicked off its investigation into former Premier Gladys Berejiklian.

Earlier this month, NSW Independent Commission Against Corruption (ICAC) released a statement announcing they would launch an inquiry to determine whether Berejiklian was in a position of "conflict between her public duties and private interest" during her secret five-year relationship with disgraced former MP Daryl Maguire.

The announcement prompted Berejiklian to resign after four years of serving the state as premier.

"I love my job, and I love serving the community but I have been given no option following the statement that's been issued today," she said during her resignation speech.

ICAC is investigating whether Berejiklian breached public trust when she awarded grants to several community organisations in the NSW Riverina region during a six-year period between 2012 and 2018.

At the centre of the inquiry are two multi-million dollar grants; a $5.5 million grant awarded to Australian Clay Target Association in 2017 from a fund overseen by Berejiklian who was then the NSW Treasurer, and the other, a $20 million grant for the Riverina Conservatorium of Music in 2018.

With the inquiry drawing near to the end of its second week, here are some of the biggest revelations to come to light so far.

On Thursday, ICAC heard just how serious the relationship between Maguire and Berejiklian was when the former Wagga Wagga MP told the watchdog that the pair were in love and discussed having children together.

When asked if he loved Berejiklian and she loved him back, Maguire replied "yes".

"There was a discussion about potentially having a child?" Robertson asked.

Maguire also told the inquiry that their relationship, which spanned from 2015 to 2018, was "physically intimate" and the pair holidayed together. He also said that they would stay over at each other’s homes and he had a key to Berejiklian's house.

Berejiklian referred to Maguire as "family" in a text message and said she got him "$170 million in five minutes".

On Friday, Berejiklian fronted ICAC herself to address the allegations.

During the inquiry, ICAC was shown a series of intercepted text messages sent in April 2018, including one where the former premier texted Maguire, "You are my family."

However, despite the text message and her strong feelings for Maguire, Berejiklian told the watchdog that she did not consider him as part of her immediate family.

"I regarded him as part of my love circle... but I wouldn’t put him in the same category as my parents or my sisters," she explained.

She also agreed with Maguire's comments about the pair being in love but said they weren't committed enough for her to tell her family.

"I had those feelings but I was never assured of a level of commitment that in my mind would have required me to introduce him to my parents."

Berejiklian also told ICAC that she would not disclose her relationship with the former MP to her colleagues if she could have her time again.

When asked why, Berejiklian responded, "The threshold for me was, did I feel there was a commitment which I would be able to share with my parents or my sisters? And I didn’t feel that there was a sufficient significance in order to do that, in terms of commitment."

The inquiry also played recordings of a phone call that took place in May 2018, where Berejiklian said she got Maguire "$170 million in five minutes" and said the then-treasurer, now NSW Premier Dominic Perrottet, "just does what I ask him to do".

In the phone call, Berejiklian is heard discussing Maguire's request for money.

Maguire told Berejiklian that he "talked to the Treasurer" and asked "how’s my hospital… am I getting my $170 million?"

He then told Berejiklian that he only received a promise of funds for graffiti removal.

"I said ‘no money for Wagga? You’ll have a f***ing riot on your hand’," Maguire continued.

"I'll deal with it … I’ll fix it," Berejiklian replied.

Two hours later, the pair spoke on the phone again.

"I just spoke to Dom, and I said just put the [money] in the budget. He goes 'No worries'. He just does what I ask him to do," she continued.

Berejiklian was also heard saying, "I just got you $170 million in five minutes."

On Thursday, ICAC was played a number of excerpts from phone calls between Maguire and Berejiklian, including one where the former premier was heard saying she would "throw money" at Wagga Wagga.

In one phone call, which took place in 2018 after Maguire resigned following corruption allegations, Berejiklian is heard saying, "I don’t want to argue with you. I just need to go and chill because you’ve stressed me out."

"All right go and chill - you just throw money at Wagga," Maguire replied.

"No, no, it’s fine, I’m batting for you," said Maguire. "You just need to know what the right things are - to throw money at Wagga."

Maguire then pointed out that a project was being blocked by bureaucrats.

"Yes, but I can overrule them," Berejiklian said.

Their relationship came as a 'shock' to staff.

While Maguire and Berejiklian's relationship came as a shock to the public, the inquiry heard that it also caught staff off guard.

Ex-political staffer, Zach Bentley, who worked for both Berejiklian and Daryl Maguire, told ICAC that he was surprised to learn of their secret relationship last year.

"I literally spat my water out," Bentley said at the inquiry last week.

"These are two people I’ve known quite well and the fact that I had no knowledge of it, like, yeah, it was quite shocking."

Berejiklian’s former chief of staff, Sarah Cruickshank, also told the inquiry that Berejiklian misled her when she said that she and Maguire were in a "historical relationship" that occurred before she became the premier.

Cruickshank said that she found out about the relationship the same day Maguire gave evidence at a different ICAC inquiry back in 2018.

"I was going out to dinner with friends and I received a phone call," she recalled.

During the call, Berejiklian told Cruickshank she was previously in "a relationship or friendship" with Maguire and was concerned about what would happen if the media found out.

"She definitely said to me, ‘it was before I became premier’... she said that a couple of times."

Cruickshank went on to say that she was surprised to learn about the extent of their relationship during the ICAC inquiry last year.

"I was very surprised and slightly mortified because I had given some free character assessments of Mr Maguire subsequent to his resignation from parliament," she said.

"I just had no idea, and I was somebody who I felt that I had worked closely with her for a period of time."

Cruickshank said she felt "uncomfortable about saying that", before adding, "there’s not really a different way to characterise it".

"The reality is, she told me it was a historic relationship, and then she has subsequently said it’s not, so I can’t do much more with that."

Mike Baird said their relationship should have been declared.

Last week, former NSW Premier Mike Baird told the inquiry that he was "incredulous" when he learned Maguire and his successor were in a relationship.

"I think it should have been disclosed," he said of the secret relationship.

Baird also said he thought the "potential conflict of interest" could have been managed had he known about it.

As for the grants, $5.5 million was set aside for the Australian Clay Target Association in Wagga Wagga in Maguire's electorate after a meeting of Cabinet's Expenditure Review Committee, which Berejiklian chaired in December 2016.

Baird said he supported the project but that he thought a stronger business case needed to be developed to support the proposal.

"I put my concerns and what I thought was needed and that was endorsed by the [expenditure review] committee," he said.

He added that Maguire was someone who would "relentlessly pursue his own agenda".

Gladys Berejiklian asked for details about their relationship to be shared privately.

On Thursday Berejiklian's lawyer asked the ICAC to hear details of her "close personal relationship" with Maguire in private to save the former premier from "humiliation and harm".

"There is no public purpose served by plumbing the depths of the private life of my client," said Berejiklian's lawyer, Sophie Callan SC.

"Doing so in public will inevitably lead to intense and irremediable publicity and public scrutiny along with humiliation and harm."

The application for the questioning about the pair's relationship to occur in private was supported by Maguire's lawyers.

He argued ICAC needs to understand "the hallmarks of the relationship in order to assess that question of objectivity".

"To take an example, if in truth the nature of the relationship was along the lines of what (her former chief of staff) said in evidence this week - she thought it was a historical relationship that was not ... a full-blown intense one - then it is much less likely that any conflict of interest would exist."

Reply
Upvote
6 upvotes
Just look at the facts- the barefaced corruption. The hundreds of millions of dollars of taxpayers money being funnelled to Wagga without question. She resigned because she knew she was toast. I’m surprised with the public/ media sympathy for her. Any of us would be jailed for this!
M
mamamia-user-482898552 7 months ago

"There is no public purpose served by plumbing the depths of the private life of my client," said Berejiklian's lawyer, Sophie Callan SC.

"Doing so in public will inevitably lead to intense and irremediable publicity and public scrutiny along with humiliation and harm."

Yes, "plumbing the depths" of a relationship that increasingly seems to have posed a massive conflict of interest would indeed cause (justified) scrutiny and harm that Berejiklian has brought upon herself. If only she'd declared the relationship and not funnelled millions of dollars to her partner's electorate... how humiliating to have all of that come to light now. That federal seat must seem to be getting further and further out of reach as the details come out....
S
suz 7 months ago

Reply
Upvote
1 upvotes
@mamamia-user-482898552  She has contradicted herself soooo much. He is family, he isn’t family. He wasn’t going to get a benefit, that is still open, not sure about that. Beyond comprehension that she didn’t know what he was up to.
M
mamamia-user-482898552 7 months ago