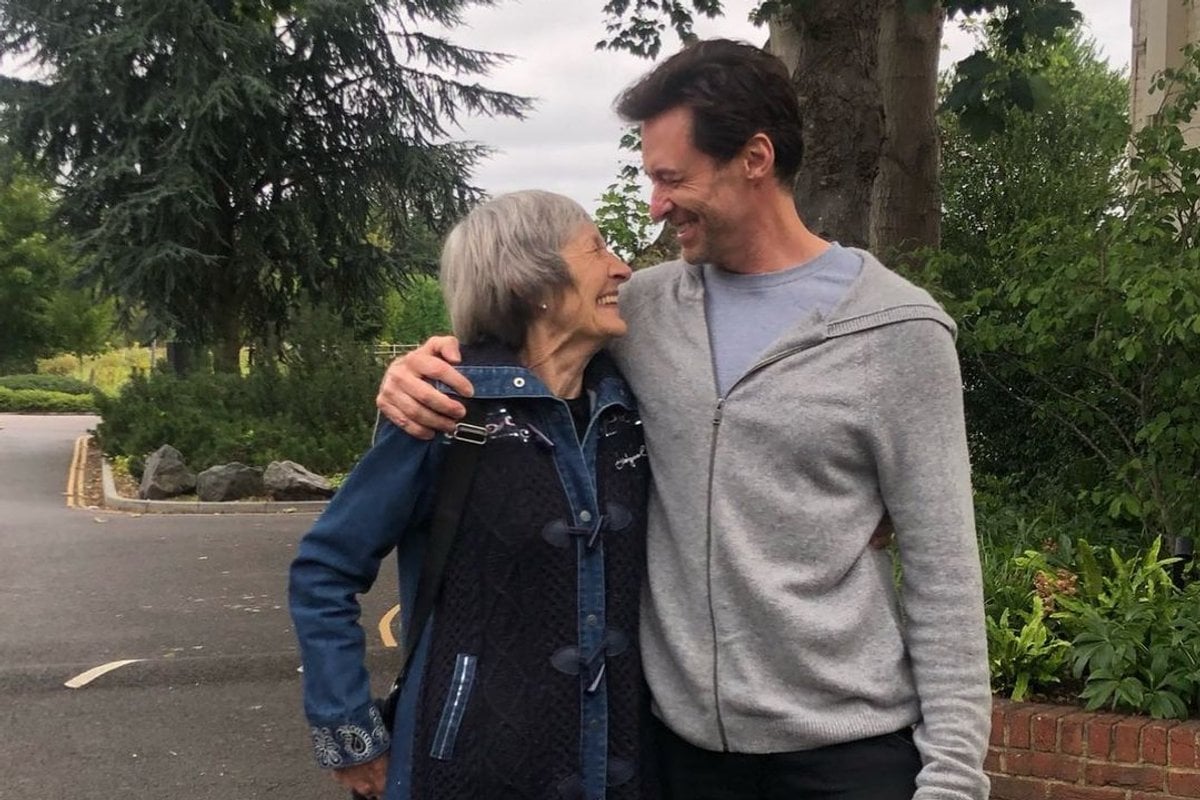 Hugh Jackman still remembers the day he returned home from school to find his mum gone.

He was eight years old at the time but he clearly remembers the towel his mother Grace had wrapped around her head when she said an unusual goodbye. Jackman didn't know what was happening, just that something was off.

When he returned from school later, it was to an empty house.

"The next day there was a telegram from England, Mum was there. And then that was it. Dad used to pray every night that Mum would come back," Jackman recalled in a December 2012 interview with 60 Minutes.

Jackman's parents Grace and Christopher migrated to Australia from England in 1967 and he was born a year later in 1968, the youngest of five siblings.

Grace didn't come back, and when his parents divorced the family was split up even further. Jackman and his two brothers remained in Australia with their dad, while his two sisters moved back to England with their mum.

"A lot of children grow up under difficult family circumstances and I don't feel sorry for myself for the fact that mine was exactly that," Jackman, now 52, told Great British Life in 2014.

"I stayed in Australia with my father and two brothers, and had a tough time for a while. But, you know, I had a very good father who was always there for us and I could never even imagine what it must have been like to raise kids on his own the way he did for many years. I don't think I could have done that. You need an iron will and I never heard him complain about himself or his lot in life."

In 2018, Jackman further spoke about the "trauma" of this time in an interview with Who magazine.

"It was traumatic. I thought she was probably going to come back. And then it sort of dragged on and on," he said.

After his mum left, she would visit the family once a year.

"It would be like a family holiday. I remember going to the beach. There was a chance of a reconciliation at that point but she never came back for good," he said, adding that it only dawned on him when he was 12 or 13 that she was not going to return.

Jackman and his mother have more than patched up their relationship since his childhood, with the pair regularly spotted together in Jackman's adopted home of New York City and Jackman sharing photos of them on social media.

In August 2021, Jackman shared a photo of himself reunited with her mother, who still lives in Norwich, England.

He simply captioned the sweet photo of them hugging: "Mum."

Jackman now understands that his mother was suffering from undiagnosed postnatal depression at the time of her departure.

"The thing I never felt – and I know this might sound strange – I never felt that my mum didn't love me," he explained to the Australian Women's Weekly.

"I've spoken about it at length with her since and I know she was struggling. She was in hospital after I was born, suffering from post-natal depression. There wasn't a support network for her here."

Jackman now shares two adopted children with his wife Deborra-lee Furness, telling 60 Minutes that he learned so much of his parenting skills from his own father Chris.

"My father is a rock. My father is my rock. It's where I learned everything about loyalty, dependability, being there day in, day out, no matter what," he said.

K
kathy_kuyken a year ago

Reply
Upvote
Re: Pippa using the word adopted being discriminatory / as a mother of a biological child & an adopted child I get where you are coming from.
But as ours was an open adoption it was part of the powers that be to use the word adopted re: our daughter (I can see the plus & negatives) of it but it doesn't seem to have been as big an issue as we feared & at the end of the day we have always loved them both equally.
I firmly believe the biological is less important then the hands on parenting of unconditional love.
Hope this makes sense - Kathy
P
pippa a year ago

Reply
Upvote
1 upvotes
Why is it necessary to describe the Jackman children as adopted? Being an adoptee myself and the mother of an adopted son, I can assure you that the Jackmans don’t look at their children any differently from the way other parents look at their biological children. It seems to me hurtful and discriminatory.
Resources
Very Peri
Skin
News
General
Opinion
True Crime
Politics
Sport
Explainer
Entertainment
Celebrity
Reality TV
Movies
TV
Books
Rogue
Royal
Lifestyle
Beauty
Fashion
Weddings
Home
Wellness
Health
Fitness
Travel
Food
Family
Before The Bump
Pregnancy
Baby
Kids
Teens
School
Parent Opinion
Work & Money
Money
Finance
Career
Lady Startup