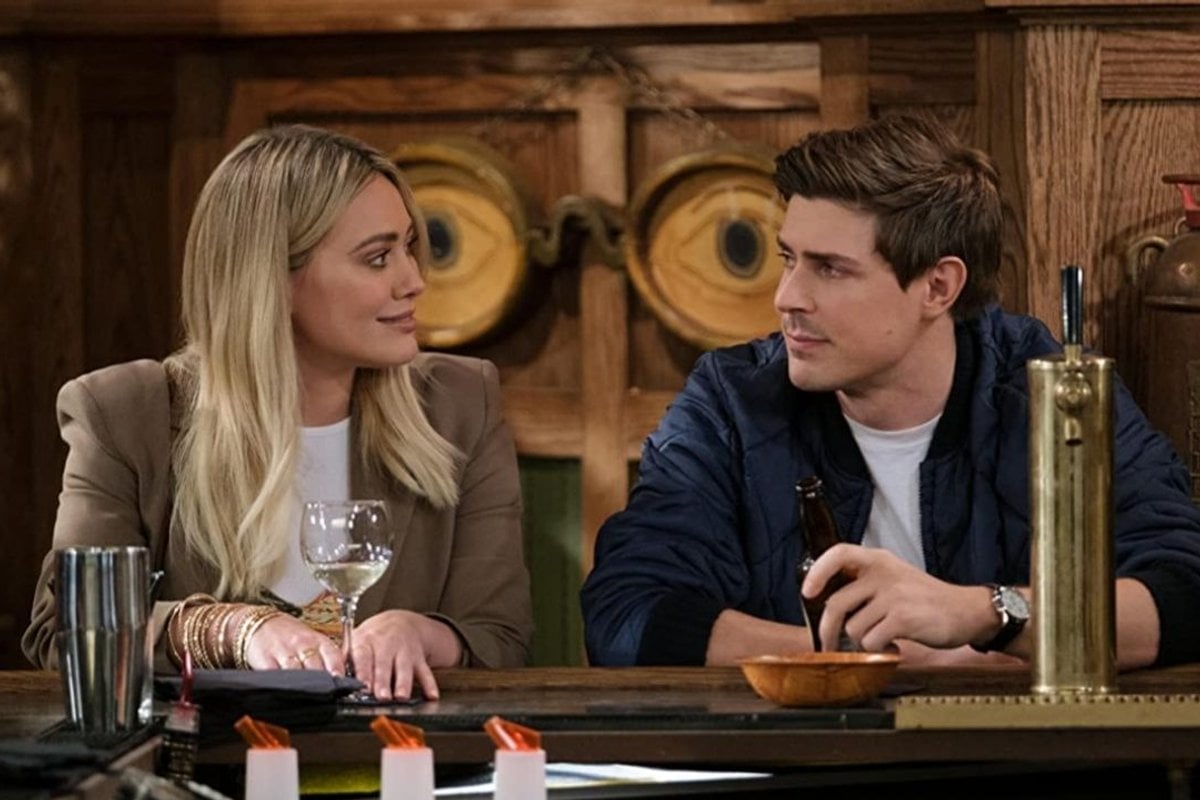 You know what would make bloody good TV?

A Sex and the City prequel that follows a 20-something Samantha Jones as she navigates dating, sex, and career highs and lows in New York City in the 1980s.

Imagine the big hair. And the shenanigans.

And how groundbreaking it would be to follow her journey from awkward, hopeful 20-something to the fierce, funny, no f**ks given Samantha we meet in the original series.

Watch the trailer for Disney Plus's How I Met Your Father. Article continues below.

Unfortunately, the reboot is not this show that I've completely made up in my head. Even though it features a lot more Kim Cattrall than I expected.

Instead, How I Met Your Father follows the story of Sophie (Hilary Duff), a 20-something New Yorker who is balancing her career with trying to find the man of her dreams on dating apps.

Kim Cattrall stars as the older, wiser version of Sophie who pops up sporadically throughout the episodes to tell her adult son - seemingly against his will - about how she met his father.

In the first episode, Sophie gets into an Uber on the way to her first date with a man she met on Tinder.

Driving the Uber is Jesse (Veronica Mars' Chris Lowell) and in the passenger side seat is his best mate Sid (Suraj Sharma), a bar owner who is about to propose to his girlfriend.

Long story short, Sophie doesn't spend the rest of her life with her Tinder date. Instead, her and her best friend Valentina (Francia Raisa) become friends with Jesse, Sid, and Jesse's adopted sister Ellen (Tien Tran).

And of course, Jesse and Sophie soon start to have some ~ feels ~ for each other, setting up the premise that Jesse is the 'father' our old, wise Kim Cattrall is talking about.

As far as sitcoms go, it has all the right elements - main characters whose storylines we can invest in, quirky best friends, a go to 'hang out' place, and a will they/won't they between Sophie and Jesse.

The reboot is also a lot more diverse than its predecessor and centres on a bunch of friends that actually reflect what a friendship group looks like in 2022.

It's a fun watch and the kind of comforting TV show you can turn to when you want to watch something new but you also don't want to have to stray too far from your phone.

It's comforting for two reasons. Firstly, there's not a lot of buy-in on the audience's part. You know exactly what you're going to get going in and there are no real surprises. You can dip into this show and not feel like you need to read a handful of think pieces to understand the nuances. Because... there aren't any.

And secondly, watching the reboot will remind you of where you were and what you were doing when the original series came out way back in 2005.

You know, back when times were simpler and precedented.

The series taps into a sense of nostalgia that we're begging for at the moment after two years of COVID-19, a string of national disasters and the ever present threat of World War III.

Watching a bunch of 20-something friends hang out in a bar and talk about their bad Tinder dates feels very far away from the reality we're living through right now. And that's probably exactly what we need in this moment.

Where you're going to run into trouble is if you go into the series expecting it to be groundbreaking or trailblazing.

It's no Ted Lasso. Or Schitt's Creek. Or Fleabag.

It's a return to a simpler sitcom where the one-liners are fast and easy and the characters' problems are resolved within the approximately 25 minutes running time.

You're also going to run into problems if you going into the reboot expecting it to live up to the original. They never do. It's just not possible.

But there's enough in this new series to give it legs. The characters are fun. And the potential of a love story between Duff's Sophie and Lowell's Jesse is enough to keep audiences coming back for more.

So if you're looking for the quickest route back to 2005 and precedented times, How I Met Your Father might be your best bet.

The first two episodes of How I Met Your Father premiere on Disney Plus on Wednesday, March 9, with new episodes dropping weekly.

Reply
Upvote
2 upvotes
I've said this before on this site, and it never goes down well, but I HATE these change gender redos. Gender reduxes never match the impact of the original.
Make something new.
Make new art.
Don't try to re-paint a cash cow and, inevitably, end up butchering it.

Reply
Upvote
2 upvotes
@gu3st I agree, not just on gender-flipped remakes, all of them! We're at the point where we're getting remakes of remakes - looking at you, Charlie's Angels.
D
daijobou 5 months ago