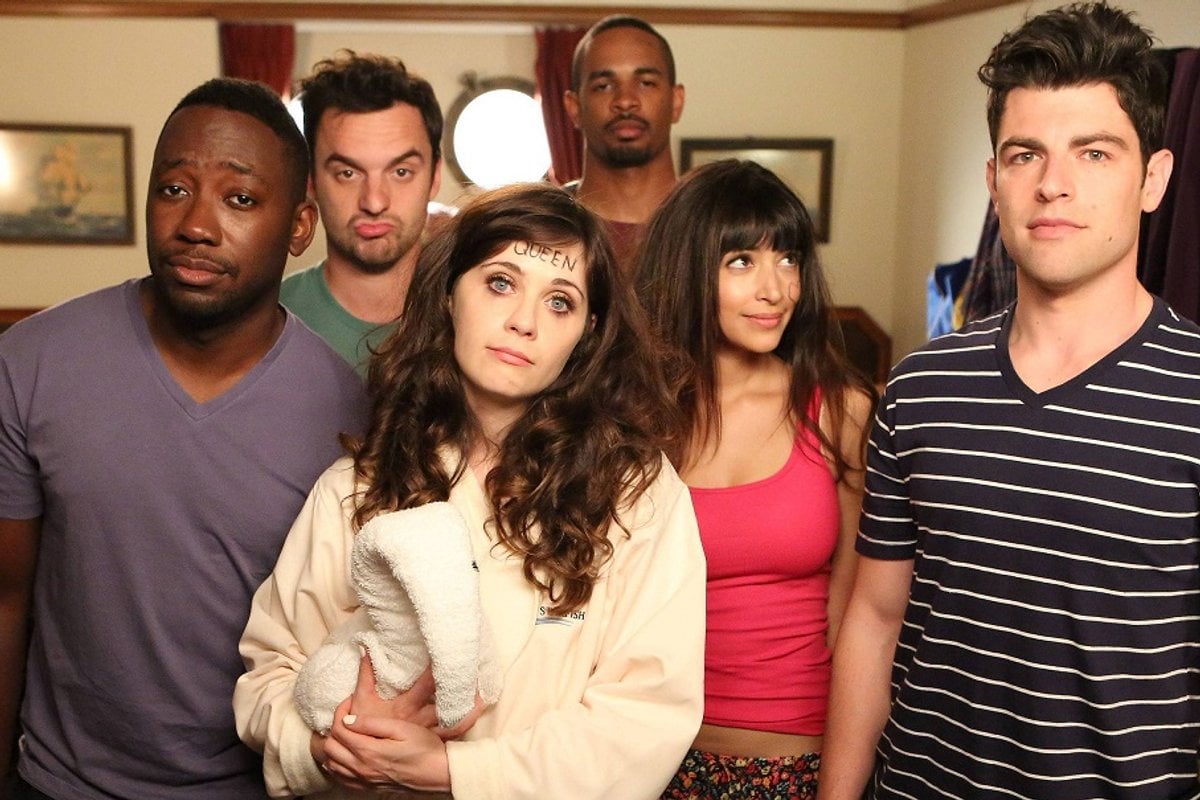 There are a bunch of great things about share house living.

First and foremost, it can be reasonably affordable. You can meet and befriend some beautiful people while living in any selection of wonderful areas.

Because whether you're just starting your shared living journey fresh out of home, or a seasoned housemate professional, as it so happens, a lot of us have horror stories about living with friends or strangers.

Because there's nothing worse than s**tty people in their natural environment.

So, we thought we'd take to the Mamamia community to hear some of these housemate horror stories.

From loud sex to... vomit, here's what they had to say:

"I had a housemate who would regularly bring guys home, sleep with them, then leave them there when she went to work. On countless occasions, I would wake up and cross paths with one of her conquests in my kitchen the next morning.

"They’d always have super loud sex in the room directly next to mine, waking me up most nights. The catalyst however was when she slept with my new boyfriend. I had just introduced them for the first time and days later he confessed they’d hooked up after she messaged him when I’d been at work one day.

"When I confronted her, she refused to take any responsibility and insisted I couldn’t blame her because she had a sex addiction. I threw her stuff out onto the front lawn."

"A few decades ago, I lived in a block of units with some flatmates. One party ended with someone peeing in my wardrobe (the bathroom was just next door…) and an actual poo outside the door of our most hated resident."

"We had to kick our best friend out last year.

"We spoke to her multiple times about her messiness which bordered on hazardous for the rest of the house. Just as an example, she left on holiday for two weeks and we have cleaners that come fortnightly to do a big clean - which meant all she had to do was take her clothes off of the floor.

"When the cleaners arrived, they say they wouldn't touch her room unless I would go in and grab her stuff off of the floor. I walk in and her whole wardrobe is on the floor. There are dishes stacked up on her desk, bed and TV stand. It was so shameful. And that situation happened multiple times.

"She bawled her eyes out when we said we no longer wanted to live with her once our lease was up (there was five months left). She left three weeks later and yes, her room was a pigsty. One housemate had been best friends with her for over a decade so it was all pretty brutal."

"I had moved five hours away from home to the city for university, and found whatever I could on flatmates.com in a hurry to move out.

"The first house I found was owned by a couple, and the boyfriend's mother also lived with them. Myself and two others rented the back half of their house and the Mum was a constant source of trouble.

"She ‘cleaned’ our lounge room throwing all of my uni notes and textbooks and our cushions in the bin. She locked us out of our bathroom and even held a knife to the other couple renting when they had a disagreement over an oven tray.

"I left that house for another, where one of the guys was so frustrated to have a girl living in the house that he carried the bathroom bin (which had a wrapped, used tampon in it) out the lounge room in the middle of a boy's poker night to make a statement about how disgusting it is live with women."

"My mum had a student staying in our bungalow when I was in high school, but she wasn't the right fit for our home. We were looking for someone who was independent and keen to keep to their own space, but she was constantly in our lounge room and inviting herself in for dinner.

"When we asked her to leave, she became obsessed with us and would come over and stand outside our house. Then when we’d go outside to see what she was doing, she’d run away. Safe to say we never rented it out again."

"My sister and I had a friend living with us and one weekend, we went away for a few days and came home to find my sister's bed was clearly slept in.

"We asked our flatmate about it, and he said he had a friend stay over, but he offered up his bed to her, and he slept in my sister's bed instead. All good. Then that night my sister went to bed and discovered her bed was soaked through with wee.

'"It turns out the flatmate's friend had slept in her bed, but he didn’t want to admit it because he knew my sister would be pissed. The friend got so wasted that she wet the bed (not just a bit, but copious amounts of pee) then got up, made the bed and left without saying a word. So foul."

"I came home one night after a late shift and found my housemate's car in the driveway, still running with the driver's door wide open. There was a trail of vomit from inside the car leading into the house with the front door wide open.

"I followed the trail of vomit to the kitchen, where the fridge and freezer door were left open with the contents thrown on the floor in a puddle of vomit.

"Then, I found her, drunk as a skunk, lying in the hallway floor, singing nursery rhymes to herself."

"A housemate of mine left these perfect woven rings of her own hair hanging all over my stuff in the shower, nearly every day until I brought it up with her. I never got any explanation for why she left them on my things and not hers, or why not throw them out? Very gross."

"My housemates in university tried to poison me.

"After a few days of getting progressively sicker and sicker, I went upstairs to the kitchen (my bedroom was downstairs) because the house was starting to smell. It turns out, there was over a kilogram of rotten prawns just sitting in the open bin.

"I'm very allergic to shellfish, so that was a fun experience. I had to take antihistamines for a few days cause the smell kept lingering."

"I had a flatmate that stole clothing, handbags, makeup... She even used one of my bags in front of me and declared it was hers! I moved in and out within six weeks as she just wouldn’t stop stealing my stuff."

"I lived in a unit provided by my employer for a year, but the catch was that I had to share with other random employees who would come and go. For a certain period of time I was stuck with a high-functioning alcoholic who constantly drank hard liquor out of a mug, disguised as tea. We barely knew each other and every night she would keep me up to tell me her lifelong woes.

"She also once forgot she was filling the bath and flooded the whole unit. Another time she boiled the kettle dry and nearly started a fire."

"I was living in nurses accommodation with two male flatmates and one of my flatmate's and I began to notice pots, pans, plates and cutlery missing. We opened up the other guy's kitchen cupboard to find months worth of washing up in there.

"He literally didn't wash anything after eating, he'd just put it in his cupboard. I'm talking pots and pans, mugs and plates all in various stages of mould growth.

"We ended up leaving a semipassive aggressive note saying 'please do your washing up'. So he did ...kind of. Well, he filled the sink with water and put everything from his cupboard in the sink... and left it there.

"A few days later, still there. And no we didn't make him sort his s**t out, we just ended up doing the washing up."

"I used to live with this girl in Norway who was a spoiled brat and a total b*tch (sorry to use that word but she was!).

"One day she was angry about something while making lunch - and stabbed through her hand while trying to de-stone an avocado! She just pierced straight through because she ignored my advice and stabbed straight down into it, rather than the classic 'tap and twist' method I suggested to be safe.

"She hit an artery, and starting wailing and screaming and waving her arm around, which sent copious amounts of blood spraying up the white kitchen cupboards, all over the counter top and the floor, and then ripped the knife out of her hand - which again I told her not to do.

"I immediately wrapped her hand and rushed her to the emergency department at the hospital in a taxi (which in Oslo ain't cheap and I was a student!). I then waited for hours while they operated and stitched her back up.I then took her home again in a taxi and put her to bed, made her dinner etc.

"Then I spent hours cleaning her blood off of the kitchen - really, hours. It was gross, it looked like a scene from CSI!

"After all that I collapsed into bed and was exhausted. The next day I naively thought it might have brought us closer, but she didn't even so much as thank me - for any of it?!

"None of her so-called friends or family came to even visit, let alone look after her so I became the maid/cook while she recovered. Not once did she say thanks. When she'd recovered, all her 'mates' came round for a party and they all treated me like s**t - they didn't even mention the fact I'd looked after her for weeks."

Reply
Upvote
It can definitely be a risky experience. I had a girl who refused to clean anything (even though she was unemployed, home 24/7 and generating most of the mess). Also super moody and would literally slam doors in our faces and ignore us for days. Lied all the time. She and her guests had farting contests in the loungeroom, got drunk and vomited all over our bathroom and bedding. When she moved out she left a pile of rubbish in the living room floor, including her used pads