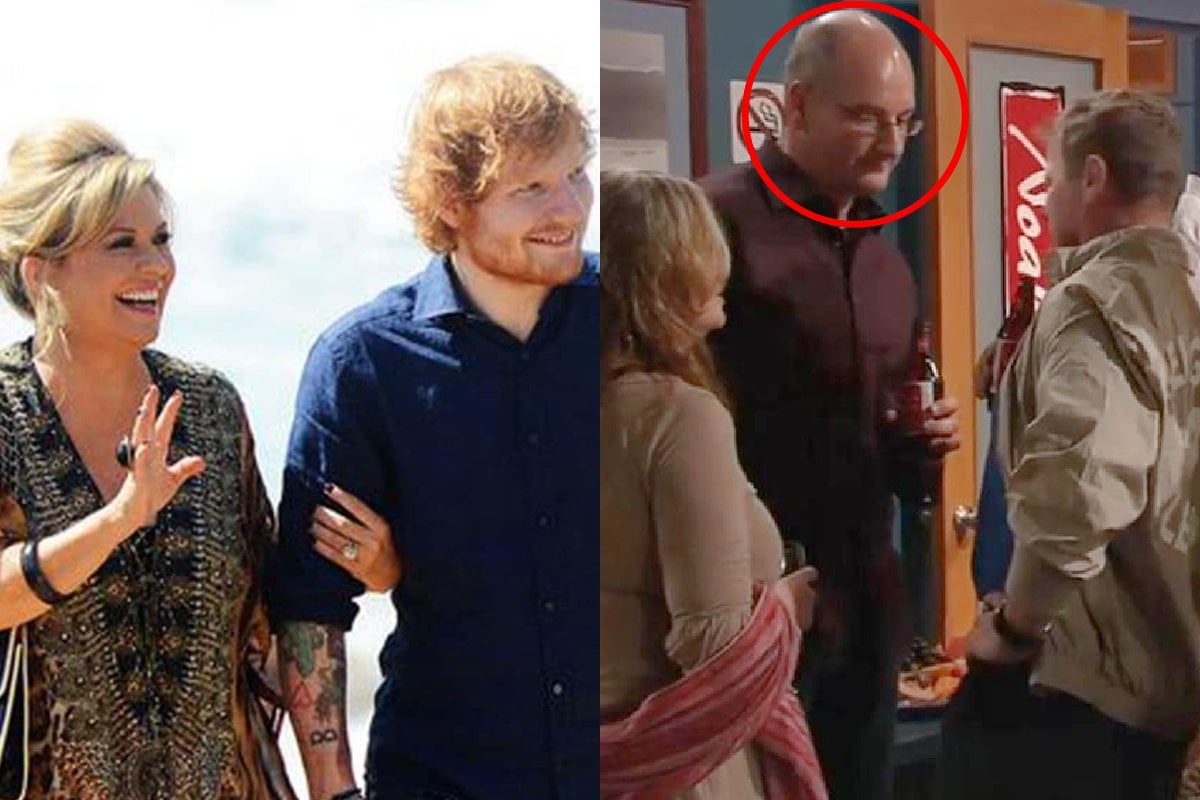 Home and Away has been on television for a... very long time. So it makes sense that every now and again, production will through in a rogue celebrity or two amongst the car crashes, blown up weddings and characters getting stranded in the bush.

Over the years, celebrities have popped up in Summer Bay for an intimate concert at the town's most happening venue, the diner, or just played average Joe's in town for a surf.

Here are the most random celeb cameos to pop up on everyone's favourite soap about good-looking people and their problems.

Ed Sheeran was already a certified A+ popstar when he appeared on Home and Away in 2015, which makes this even weirder. How much did they pay this man???

In the show, Ed played himself, but for some reason he's referred to as 'Teddy'. It... didn't catch on. 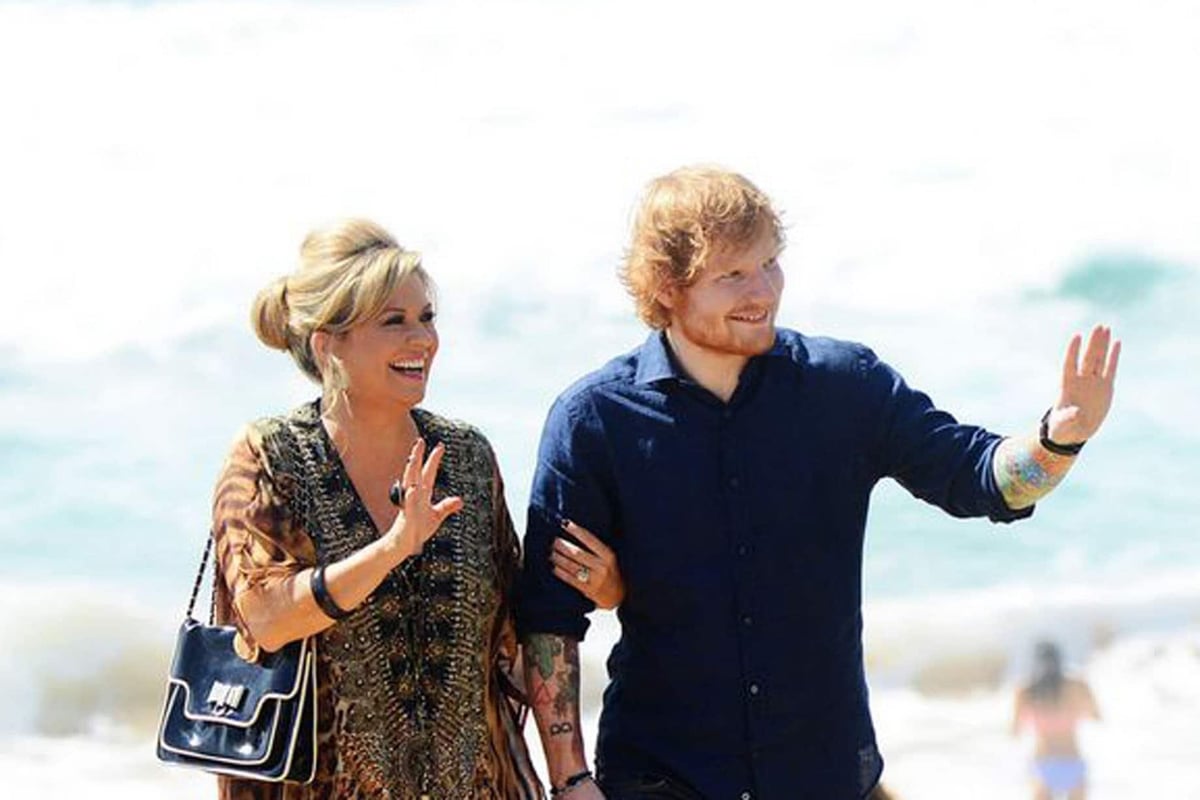 Rather than just playing a global superstar who popped to town for some sun (and hopefully a lot of SPF), they gave him a full on storyline: He was supposed to be one of the kids that Marilyn Chambers babysat when she lived in the UK, and he'd come to Summer Bay for a reunion.

Marilyn, bless her soul, does not realise that he is THE Ed Sheeran, King of the Wedding Song. She takes him to the diner, of course, where patrons begin to stare at him and approach him for autographs, which is where she is finally told who he is. 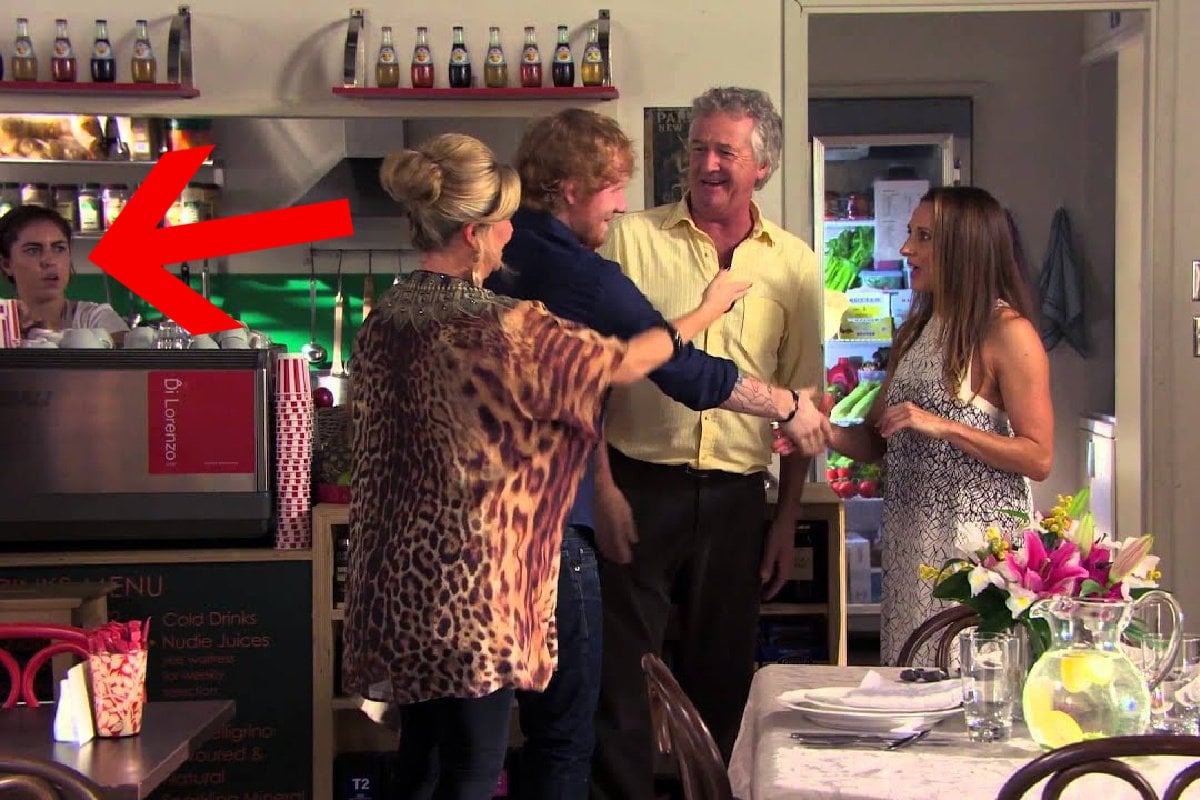 From here, Ed delivers an impromptu performance of 'Thinking Out Loud' while Leah and Zac make eyes at each other and run across the room to make out in front of everyone. Ed seems... pleased about it.

Also, FYI, it seems like Ed loves a cameo. He made a cameo on NZ soap Shortland Street (basically Home and Away, but set in a hospital instead of a perpetually warm beach town) in 2014, and in a really storyline offered advice to the character of Riverdale's KJ Apa.

He famously appeared in Game of Thrones in 2017, and Star Wars: The Rise of Skywalker in 2019. He's also played himself in Bridget Jones's Baby and Yesterday.

Why? No bloody idea. But the residents of Australia's most dangerous seaside town must've been stoked.

THIS IS THE MOST RANDOM OF THEM ALL.

In 2001, in a special episode of the show, poor wee Nick Smith found himself lost on a busy street in London. 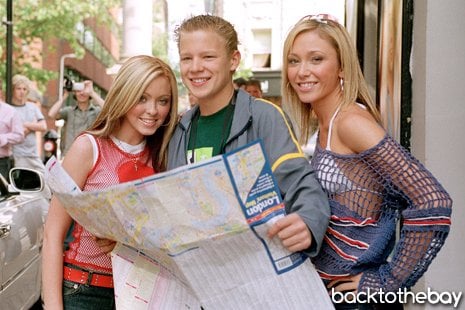 Image: Channel Seven/Back to the Bay.

Luckily, British girl group Atomic Kitten - yes, the women who you heard singing "the tiiiide is high, but I'm hollllding on" about 30 times a day in 2002 - were on hand to... give him directions.

Literally. That's all they do. But they do it wonderfully.

A cameo for the ages.

The year is 2005, and Australia was preparing for its very own Jen and Brad on Friends moment. Hayley Smith was basically our own Rachel Green, with a few more tragic love stories under her belt.

Bec Cartwright, who played Hayley before Hayley magically transformed into a redhead, was engaged to tennis star Lleyton Hewitt at the time, and they decided... a TV cameo would be a fun date night idea. 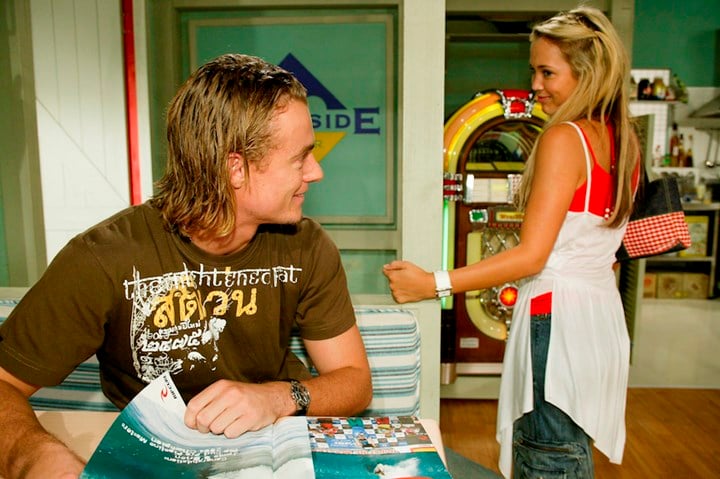 Lleyton appeared in two scenes of the show - in the diner, of course - across two nights. In the first, he basically eyes up Hayley while she's with her pals and love interest, Kim (a.k.a Chris Hemsworth...) and in the second, he has a small speaking role alongside Hayley and absolute legend Irene.

For a very, very brief moment in 2007, Kochie swapped the Sunrise couch for a two-line cameo at the Summer Bay surf club. I mean, what a place to do it! 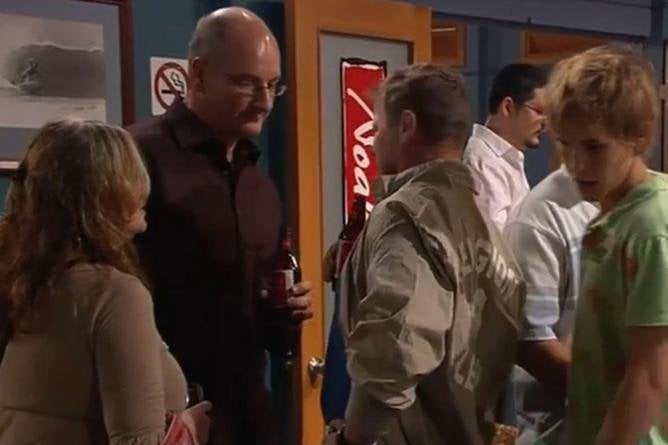 In the scene, Kochie is mingling at the bar when he gets two crucial lines of dialogue: "Yeah, sure".

In the show's early days, Sally won tickets to see John Farnham (goals!) but she came down with the chicken pox and wasn't able to go. 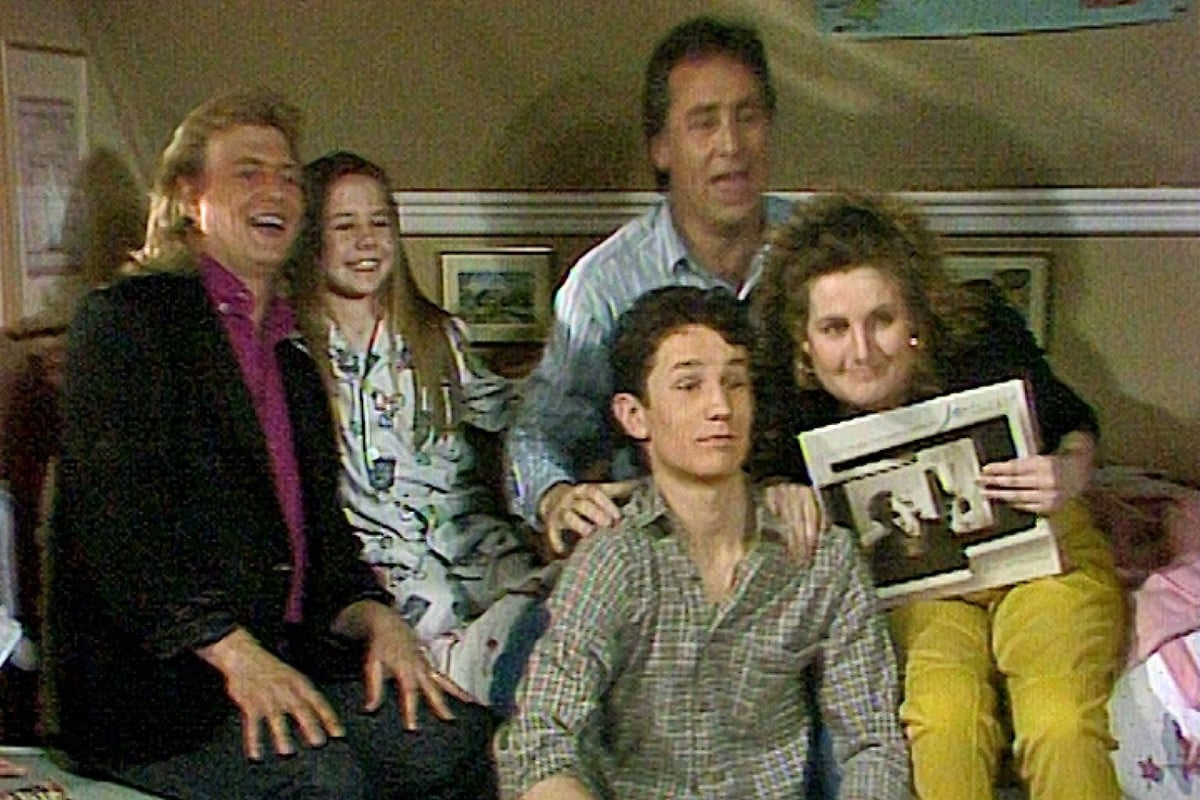 Bobby and Frank went instead and told Farnsey about Sally's highly contagious disease, so naturally he came over to say hi.

2003 was a huge year for Paulini. First, she came third in Australia's first ever series of Australian Idol, and second, she starred in Home and Away.

On the show, controversial character Josie used her contacts to get Paulini to perform at the opening of the town's new bar, Noah's. Seems legit.

At the opening, Paulini sings 'We Can Try' before being dragged around the surf club by the series' greatest ever character (come at me!) Colleen, who introduces her to all the town's good looking folks. 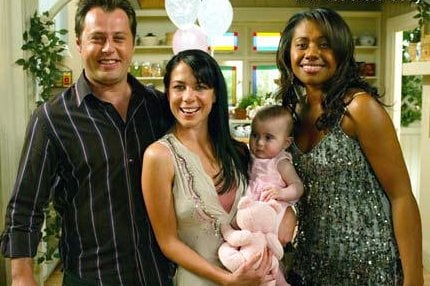 Image: Channel Seven/Back to the Bay.

In the most Home and Away twist ever, another storyline in the same episode follows Sally and Flynn trying to find a new venue for their daughter Pippa's christening, because... the local church burnt down. OF COURSE IT DID.

It's moved to Summer Bay house, a.k.a where half the town lives, and Paulini tags along, where she sings an acappella version of 'Silent Night'. Yes, a Christmas song. And the episode aired in November. Don't ever tell me Home and Away doesn't push boundaries.

In 2016, Jessica Mauboy appeared as herself to perform at the aptly named 'Summer Grooves music festival', which goes really well until an arsonist starts a huge bushfire. Classic Home and Away move. 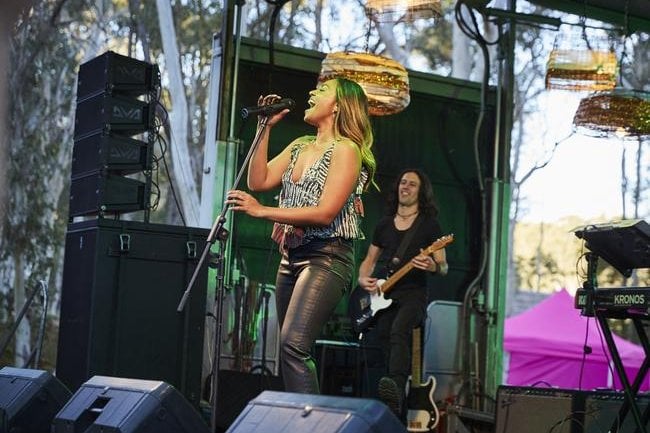 I think Jess escaped without harm, because there were lots of actual characters declared missing in the chaos, and so we never actually heard about her again.

Monty Python's Michael Palin was in Australia filming his travel series Full Circle in 1997, so naturally a trip to the peculiarly deadly town of Summer Bay was high on the agenda.

In the series, he played an English surfer who interrupts a conversation between Fisher and Marilyn to ask if there are any sharks in the ocean.