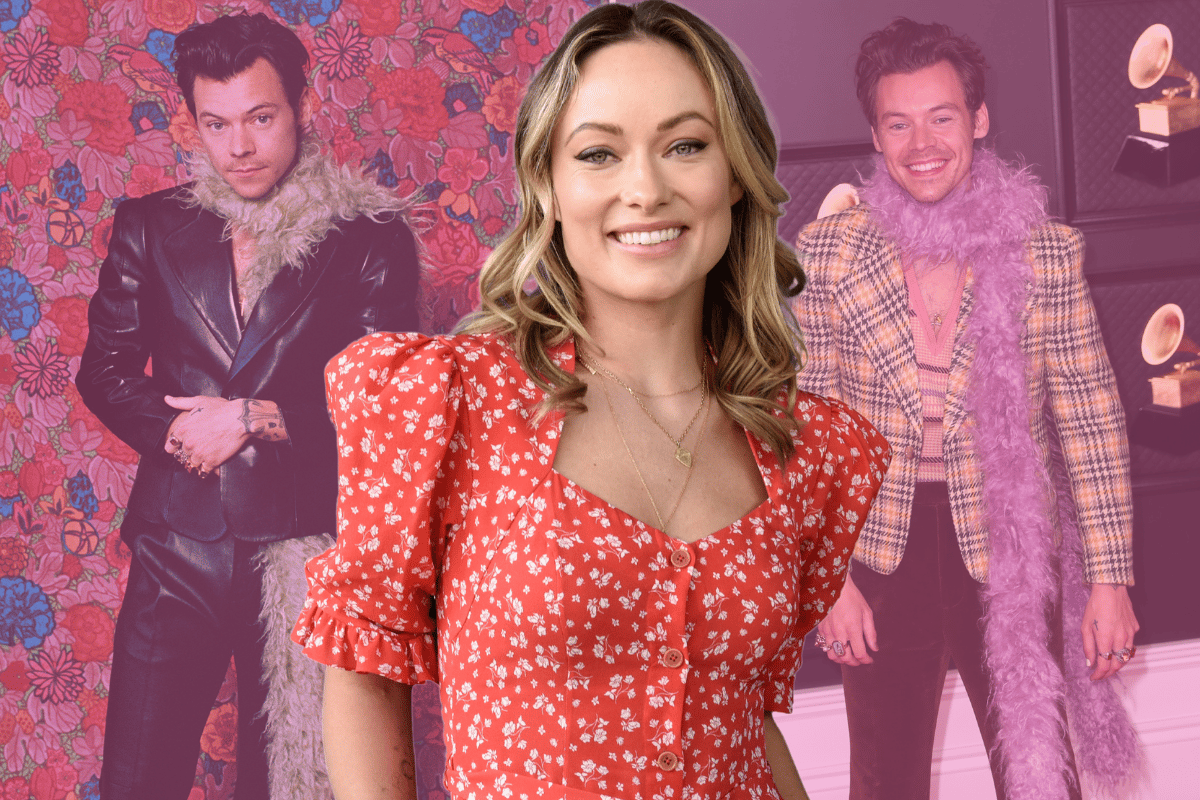 On January 4, Olivia Wilde was thrust into the headlines when she was photographed holding hands with Harry Styles.

At the time, the rumoured couple were seen attending a scaled-down wedding for Styles' manager at the San Ysidro Ranch in Montecito, California.

"They were affectionate around their friends, held hands and looked very happy. They have dated for a few weeks," a source told People.

Now 11 months later, the pair are still together, and Wilde says she is "the happiest I've ever been".

So why is it that the tabloids were so savage about the relationship between Wilde and Styles?

Watch: Behind the scenes of Harry Styles' Vogue photoshoot. Post continues below.

The start of Olivia Wilde and Harry Styles' relationship.

Wilde and Styles met after the singer was cast alongside Chris Pine and Florence Pugh in Wilde's upcoming movie, Don't Worry, Darling.

"Olivia and Harry are together for long days on set and have gotten to know each other really well, so it's all very organic," a source told Entertainment Tonight.

"[Olivia] wouldn't let a romantic relationship get in the way of a professional one, so anything they're doing is being done thoughtfully."

Listen to The Spill: The false narrative of Olivia Wilde and Harry Styles. Post continues after audio.

Although news of their separation broke in November, sources claimed that their relationship had ended much earlier.

"The split happened at the beginning of the year. It's been amicable and they’ve transitioned into a great co-parenting routine," a source close to the couple told People.

"The children are the priority and the heart of the family’s relationship." 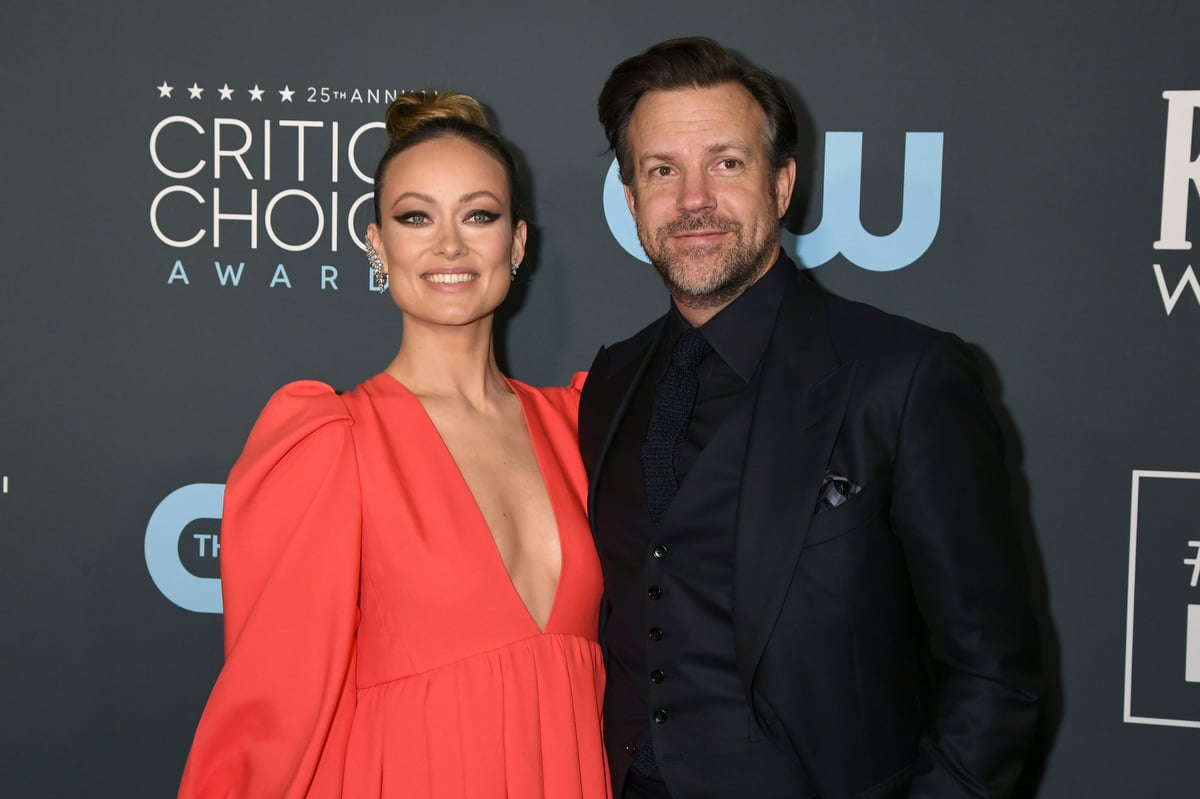 In the tabloids, the split between Wilde and Sudeikis was perceived as amicable. But when photos emerged of Wilde and Styles hand-in-hand, the narrative soon changed.

Suddenly, the story behind Wilde and Sudeikis' split entirely back-flipped in the tabloids.

Almost immediately, Olivia Wilde transformed into the villain. She became the 37-year-old woman who moved on with a much younger man. The actor and director who was "risking it all" for her "boy toy". The mother-of-two who "tore apart" her family by putting her new love life ahead of her children.

After the paparazzi photos emerged, sources began claiming that the couple's separation overlapped with Wilde's first meeting with Styles.

"Olivia called off the engagement in early November but only after she already had gotten close to Harry," one source told Us Weekly.

"Whether Harry knows it or not, he was a reason for the split and it blindsided Jason — he totally adores Olivia and is devastated. Family is his biggest priority."

The publication later reported that Sudeikis is "desperate" to win Wilde back so that they can "repair their family".

"Jason’s had no option but to step back and let Olivia do her thing, but he [has his fingers crossed] that this is just a phase and that Olivia will snap out of it or that Harry will get bored and move on before too long," a source claimed.

Some tabloids even claimed that Jennifer Aniston is supporting the actor through this "nightmare".

"She’s been an absolute rock for Jason throughout this nightmare. They talk and text every day," a source told Heat.

"She's been sharing her coping strategies, such as meditation and yoga." 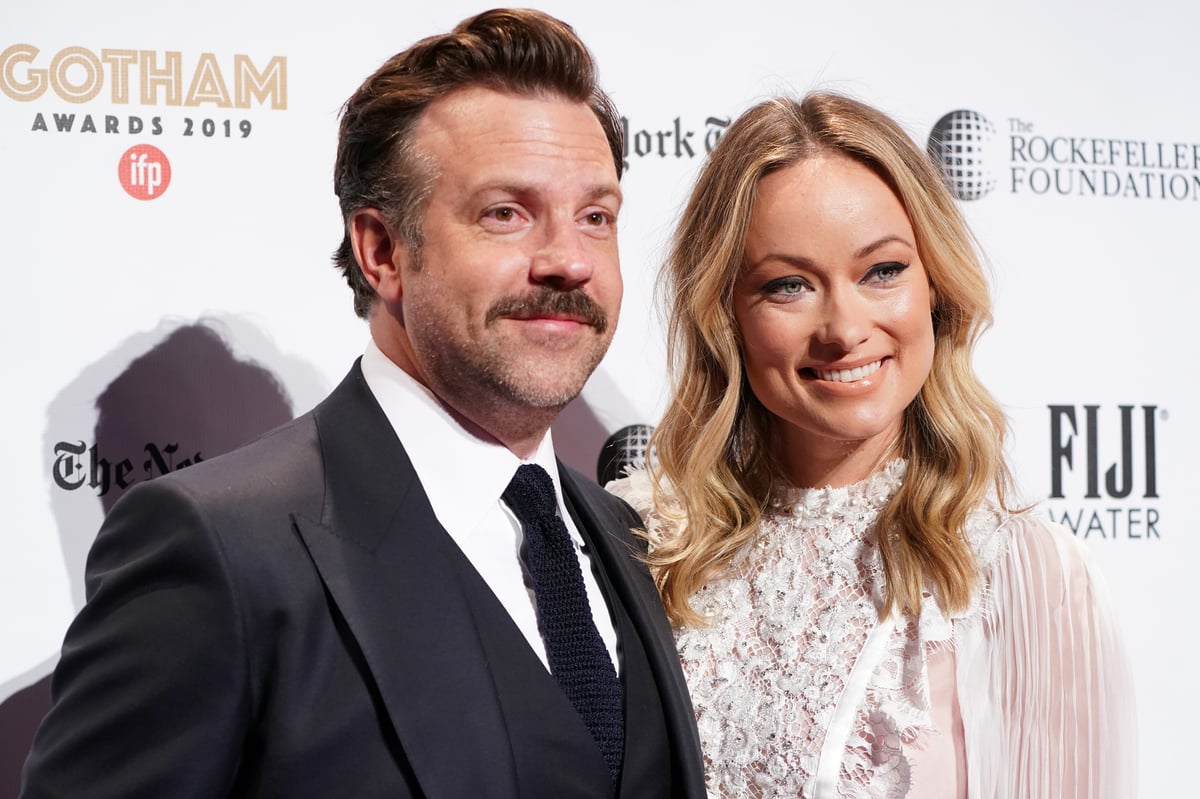 Image: Getty. The impact of the villain narrative.

As the tabloid narrative changed, Olivia Wilde was forced to restrict her Instagram comments following an intense slew of negative comments.

While Styles has received a mere sprinkling of negative comments, Wilde has faced endless backlash, with social media users telling her that she should be "ashamed" and "embarrassed" of her rumoured new relationship.

It's a Hollywood double standard that we've seen time and time again.

From Leonardo DiCaprio and Camila Morrone (23 years) and Jay-Z and Beyoncé (12 years), to Blake Lively and Ryan Reynolds (11 years) and even Jason Sudeikis and Olivia Wilde (10 years), nobody bats an eyelid when men in Hollywood date younger women. Currently, Sudeikis, 46, is dating his Ted Lasso co-star Keeley Hazell who is 35.

As Us Weekly put it, Wilde is "risking it all" for her "boy toy". 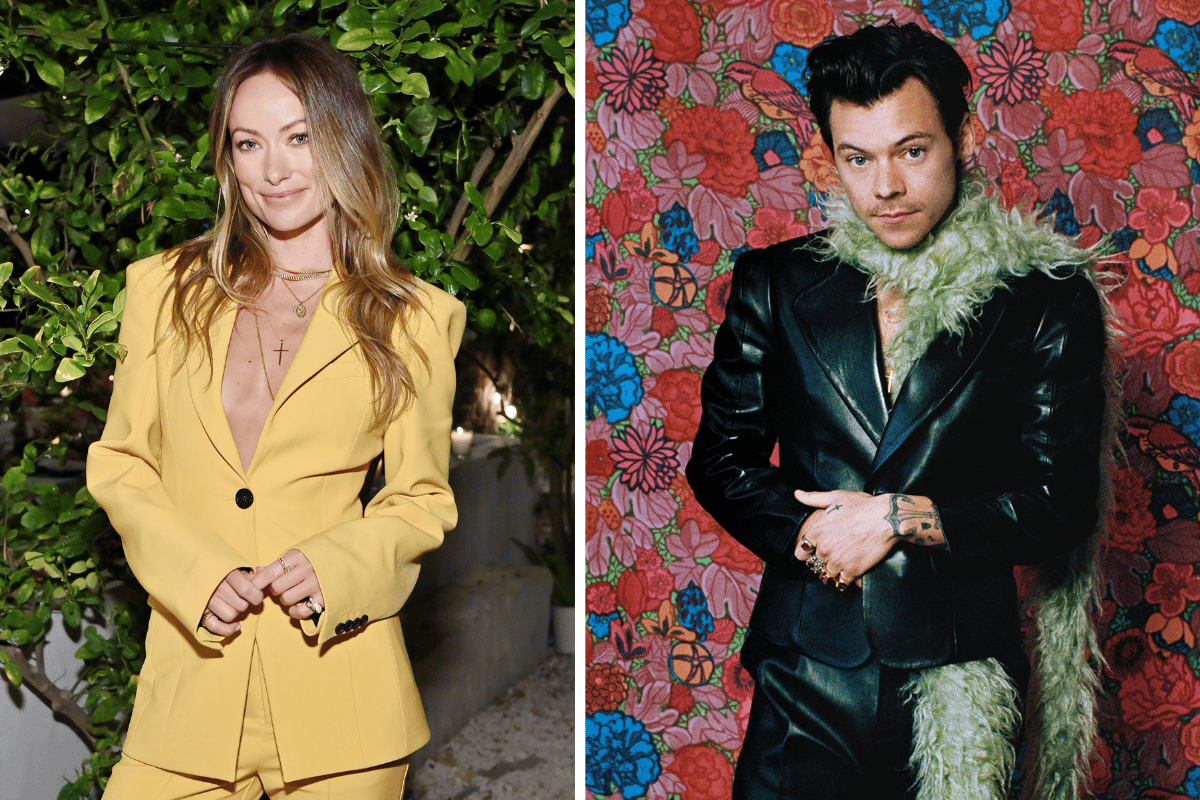 Image: Getty. For Harry Styles, it's a familiar narrative.

In 2011, the former One Direction member was linked to Caroline Flack, who was 14 years his senior.

"I already knew that he had a crush on me, he'd made it pretty obvious," Flack wrote in her autobiography, Storm in a C Cup. "He'd said it in magazines and he'd said it to friends." When Styles was later photographed coming out of Flack's house, she began receiving death threats.

"Once that was out, it was open season — anyone could say anything. In the street people started shouting at me 'paedophile' and 'pervert'," Flack wrote.

It was a similar story for Priyanka Chopra and Nick Jonas, who share a 10-year age difference.

"I find it really amazing when you flip it and the guy is older, no one cares, and actually, people like it."

Listen to The Spill: How Olivia Wilde became the villain in her romance with Harry Styles. Post continues after audio.

As a mother, there's another layer to the intense scrutiny that Wilde is facing.

After baseless rumours emerged that Wilde and Styles had moved in together, fans used these rumours as ammunition. Suddenly, there was "evidence" that Wilde was "tearing apart" her family, and creating instability for her two children.

"Imagine breaking up your family just so you can get with some younger guy. Absolutely disgusting. So selfish," one social media user wrote.

"She should be taking care of her two kids instead of dating one," another commented.

"You should be ashamed of yourself," another said.

This week, Olivia Wilde was featured on the cover of Vogue, speaking to the publication about what her life is like now.

As written in the interview, the relationship between Wilde and Styles "has been subjected to the glare of widespread obsession, envy, and tabloid-fueled cattiness."

.@oliviawilde’s feverishly anticipated sophomore feature isn’t even out yet, but the actor-filmmaker is already reinventing the Hollywood machine—and she’s happier than ever. https://t.co/ComJOJ44su pic.twitter.com/89IvKYpgN4

When asked by the interview journalist if she would like to comment on the press associating her relationship, Wilde said: "It's obviously really tempting to correct a false narrative. But I think what you realise is that when you're really happy, it doesn't matter what strangers think about you."

Reply
Upvote
I'm happy for them, and I've tried to stay out of reading about their relationship this past year because I knew it would be a mess. They definitely don't deserve any of this backlash. I feel like a lot of Harry's fans would be saying they hate the relationship under the guise of "age gaps can be predatory", "she just broke up from her long term partner and probably should take some space for herself, not date anyone right away" etc but really they have an unhealthy attachment to Harry and aren't happy when he's with anyone. It's cringe, and I wish people would stop. The thing in this article that I have an issue with is the Caroline flack bit, he was 17, she was 31. The writer left that out. I think a gap like that is too much and never okay. Obviously 17, 18 yr olds might have crushes but just say no thanks
S
silasgrail a year ago