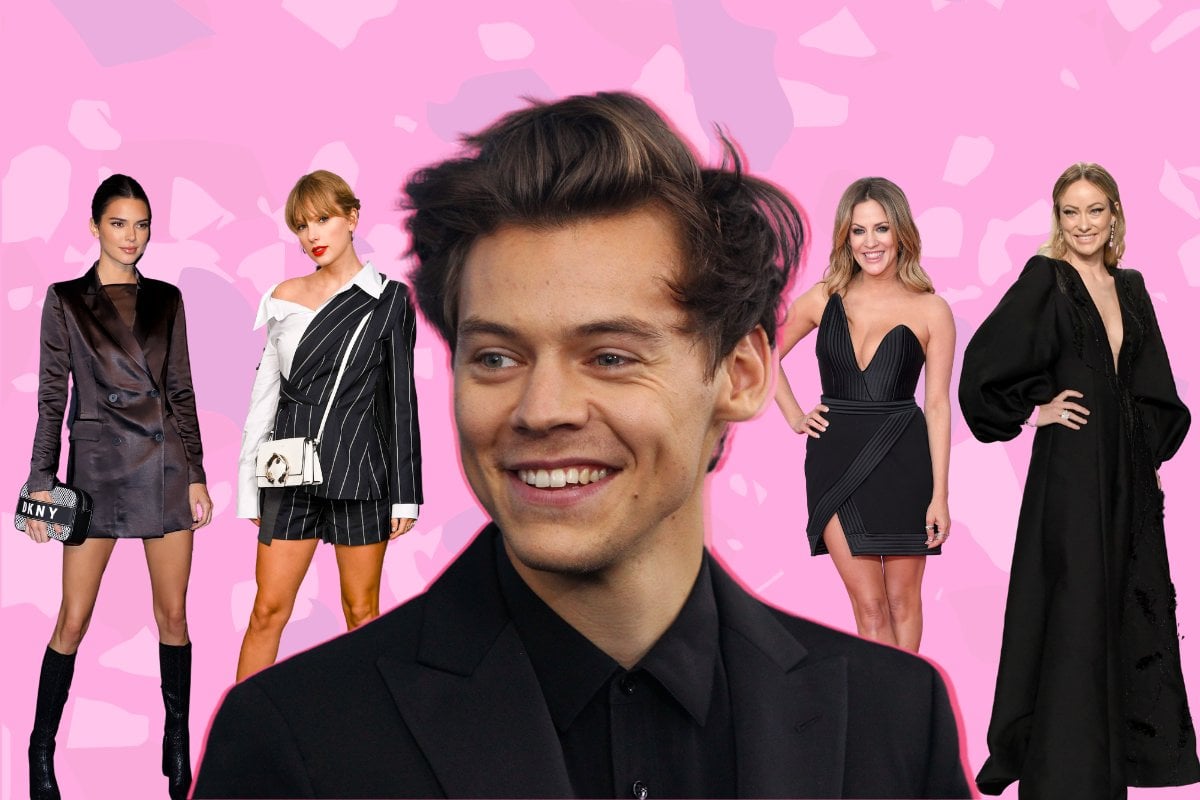 The pair, who met after Wilde, 36, cast Styles, 26, in her upcoming film Don't Worry Darling, were seen hand-in-hand at a scaled down, COVID-safe wedding for Styles' manager Jeffrey Azoff.

There were only 16 people present at the ceremony, which Styles also officiated.

Watch: Harry Styles on how a breakup inspired his album Fine Line. Post continues below video.

While neither Styles or Wilde have made anything official, as soon as the paparazzi images were released, so were the 'sources'.

"They were affectionate around their friends, held hands and looked very happy. They have dated for a few weeks," one told People.

Another told E! their inner circle had known of the relationship was several weeks and "they had a great time and are very happy".

As part of Styles' profile for his December 2020 Vogue cover, Wilde said she and Don't Worry Darling costume designer Arianne Phillips "did a little victory dance when we heard that we officially had Harry in the film, because we knew that he has a real appreciation for fashion and style".

And when Styles faced backlash from conservative commentators for wearing a dress on the magazine cover, Wilde defended him online.

While Wilde's past relationship with Jason Sudeikis was very public, Styles rarely addresses his relationships - even though he's dated some of the most famous women in the world.

In late 2011, Harry Styles was linked to Caroline Flack, who he met when she was a presenter on The Xtra Factor.

The relationship caused a lot of controversy as Styles was 17 at the time, while Flack was 31.

"I already knew that he had a crush on me, he'd made it pretty obvious," Flack in her autobiography, Storm in a C Cup. "He'd said it in magazines and he'd said it to friends." 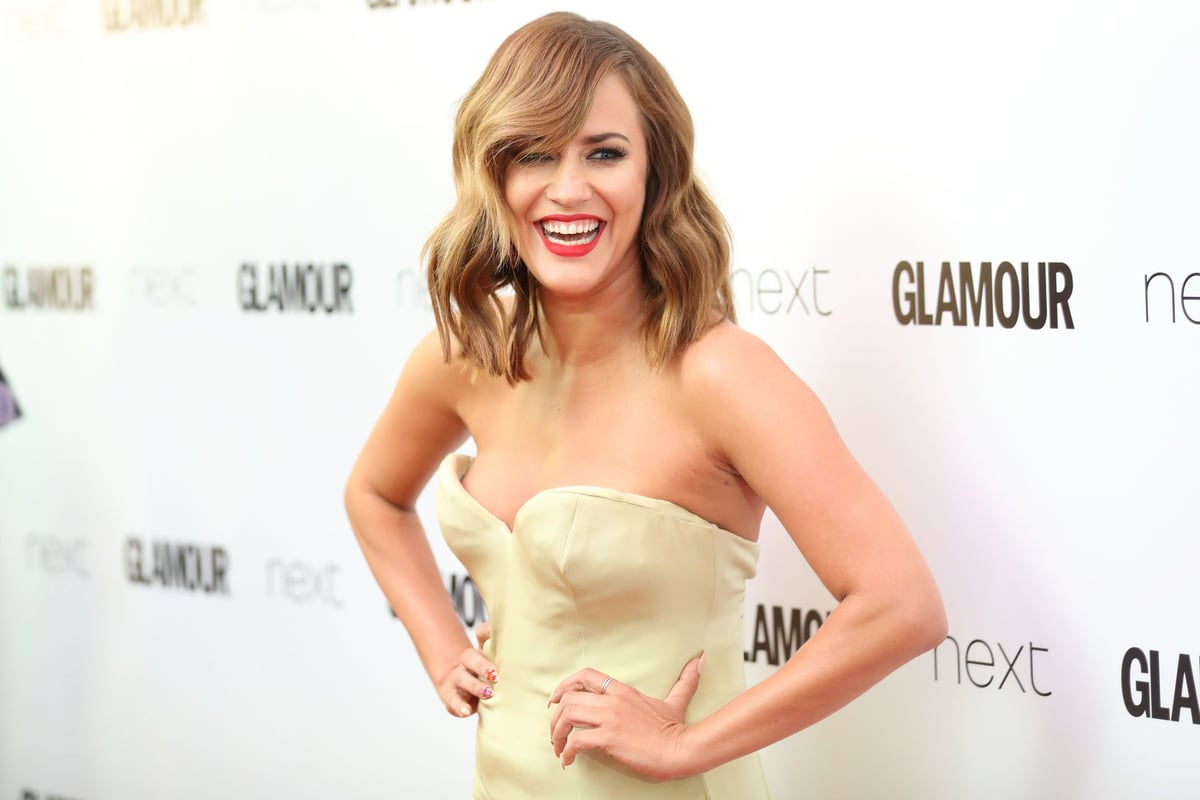 She said the relationship began to go wrong when Styles was photographed coming out of her house.

She said she'd received death threats from Styles' fans, and abuse was shouted at her in public.

"Once that was out, it was open season - anyone could say anything. In the street people started shouting at me 'paedophile' and 'pervert'," Flack wrote. 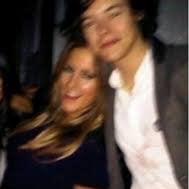 They broke up in January 2012 after about three months of dating. Styles wore a black remembrance ribbon at the 2020 BRIT awards, held just days after Flack's death.

Throughout 2012 he was linked to a American model Emma Ostilly, who starred in a One Direction music video, actress Emily Atack and Made in Chelsea star Caggie Dunlop.

"Realising my wife had decided to leave me because she had fallen for a 17-year-old boy, that’s the most ­embarrassing thing," he said.

"I'm a man in my thirties and she left me for him, a young lad. That's what has ripped me of my dignity."

The pair had had been in contact after being introduced by Justin Bieber at the March 2012 Kids' Choice Awards (Ah, 2012, a simpler time) but soon went their separate ways.

A month later in April, Styles was papped kissing Ostilly in Auckland, New Zealand... which is referenced in Swift's aptly named banger 'Style':

"I say 'I've heard that you've been out and about with some other girl, some other girl' / He says 'What you've heard is true but I / Can't stop thinking about you' and I / I said 'I've been there too a few times'."

(Very important side note: See 'Out of the Woods', 'I Know Places', 'Wonderland', 'Clean' and basically Swift's entire 1989 album for more Styles-inspired tunes).

By November, Styles, then 18, and Swift, then 22, were properly dating. Photos of the couple on a walk through Central Park were splashed across the internet, and everyone had an opinion. 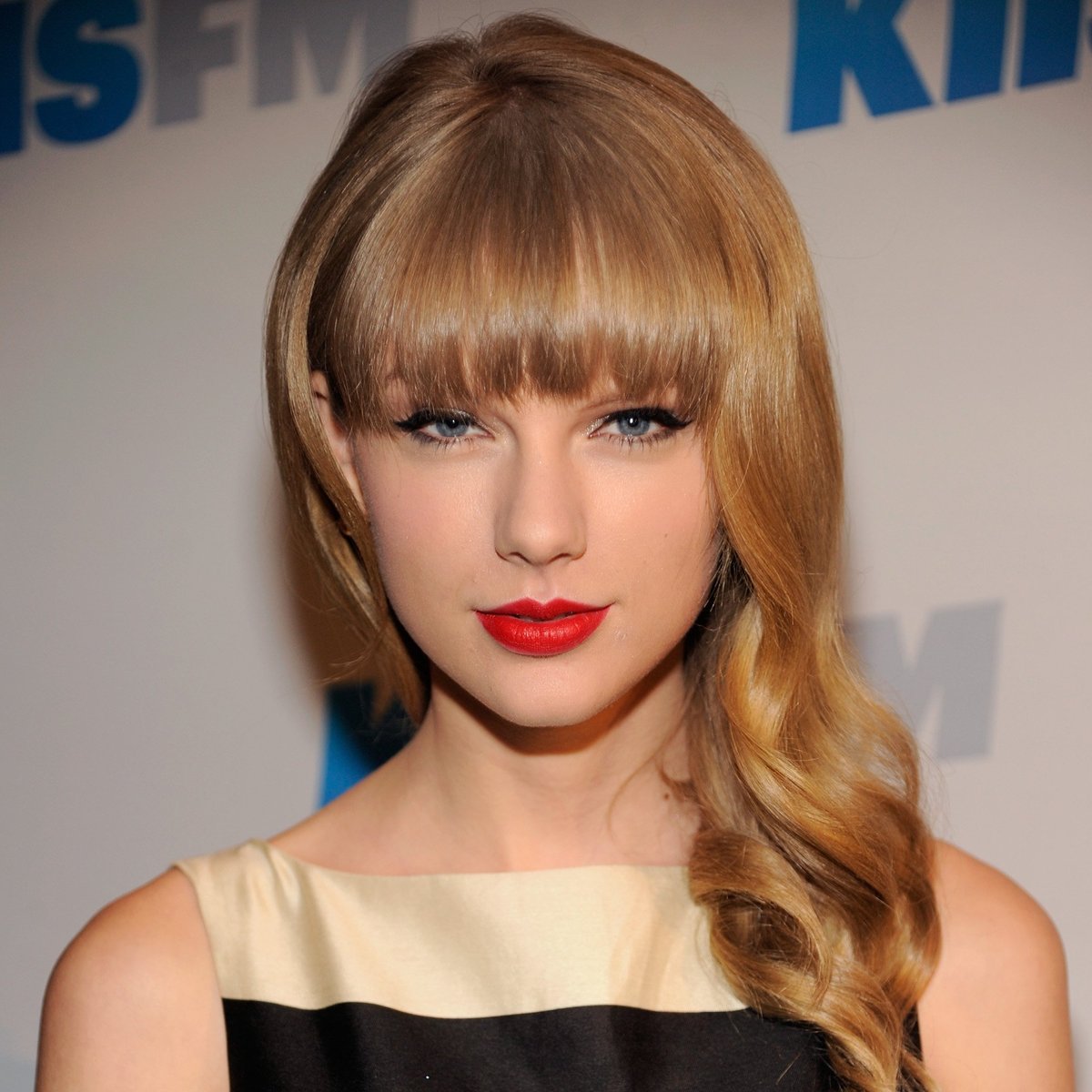 Both have spoken, or uh, sung about how hard it was to foster a relationship in such a public way. Swift sings about it, and Styles spoke about the photos from that Central Park date in a Rolling Stone interview.

"When I see photos from that day, I think: Relationships are hard, at any age. And adding in that you don't really understand exactly how it works when you're 18, trying to navigate all that stuff didn't make it easier.

"I mean, you’re a little bit awkward to begin with. You're on a date with someone you really like. It should be that simple, right? It was a learning experience for sure. But at the heart of it – I just wanted it to be a normal date."

"I think about what it means to me to write a song about somebody else and for somebody else to do that, it's like flattering, even if the song isn't that flattering, you still spent time on it and ultimately, using Taylor as an example, she's a great songwriter. So at least they're good songs," he told Howard Stern.

In late 2013, Styles had a 'fling' with Pussycat Dolls singer Nicole Scherzinger, who was 16 years his senior. 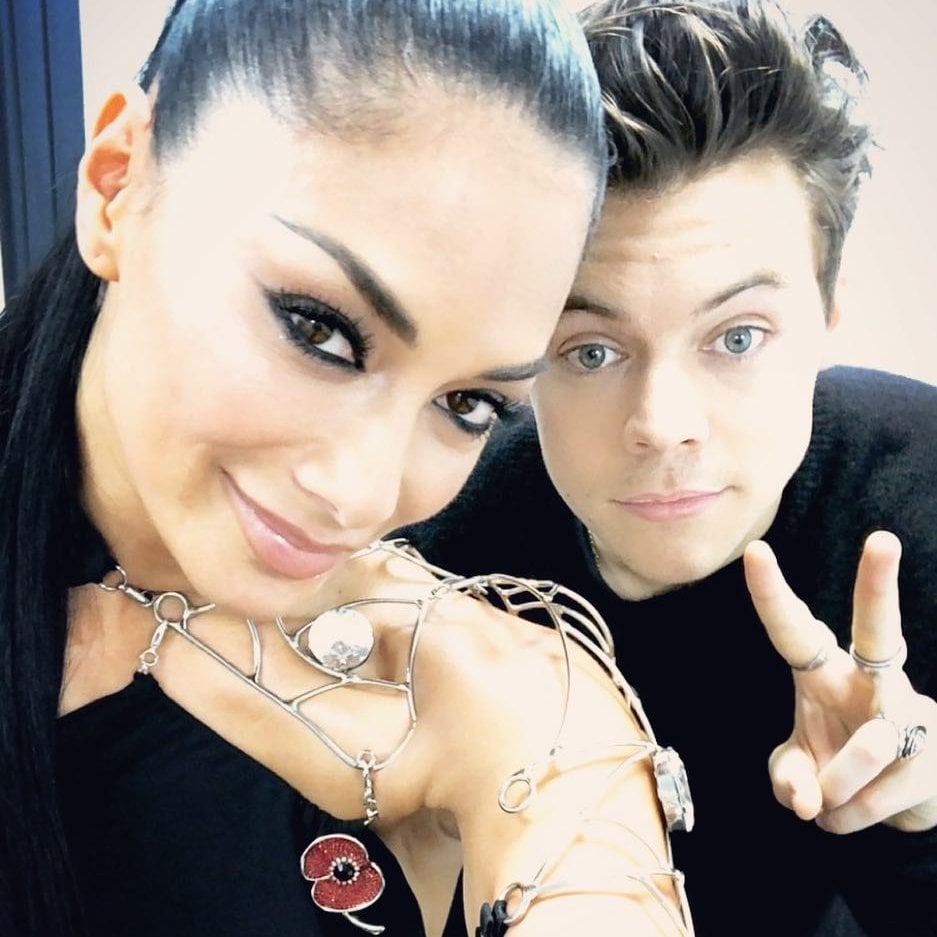 Scherzinger had been a guest judge on the X-Factor in 2010 when One Direction was formed.

Next he was linked to Rod Stewart's daughter Kimberley Stewart (15 years his senior), after her dad accidentally let slip Styles' car had been at her home overnight in an interview.

In November 2013, Styles was spotted having dinner in Los Angeles with Kendall Jenner, though their relationship didn't last long. At least at first.

Throughout 2014 and 2015 he was seen with a number of Victoria's Secret models including Nadine Leopold, Sara Sampaio and Georgia Fowler, but he brought in the 2016 New Year with Jenner.

Quick! Listen to our You Beauty episode where we find out what Georgia Fowler puts on her face. Post continues after podcast.

A week later, Jenner's sister Khloe Kardashian said she thought they were dating.

"I don't know if they're like boyfriend-girlfriend. Nowadays I don't know. People are weird with stuff. So, I don't know their title. But I mean, they were in St. Barts together hanging out, so to me that's dating." 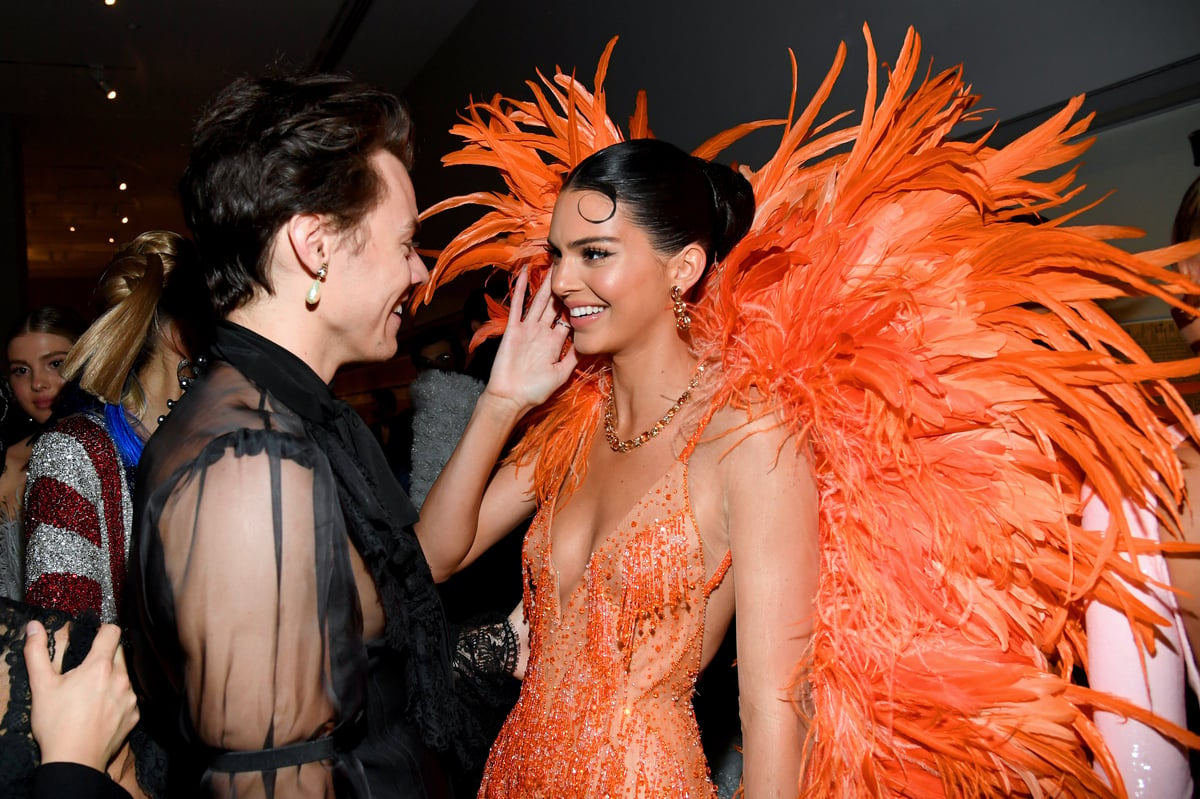 Image: Getty. Whatever it was, they continued to be spotted together a couple of times throughout 2016 but they soon both moved on, though they remained friends.

Styles next had a year-long relationship with Victoria's Secret model Camille Rowe, 30, who is seemingly the inspiration behind his 2019 album Fine Line - but he won't say it outright.

"It's not like I've ever sat and done an interview and said, 'So I was in a relationship, and this is what happened'," Styles explained to Rolling Stone.

Styles dating life has definitely quietened since his breakup with Rowe, until the recent photos of him with Olivia Wilde surfaced.

In March 2020, he told Howard Stern romance can be difficult when you're his level of famous.

"It's always kind of a balance thing, because you want to date normally but then, you also want to protect it so it can be normal," he explained.

"I think a big part of it is like, you want to be able to spend enough time with each other where you can get to know each other before you have to deal with the extra stuff."