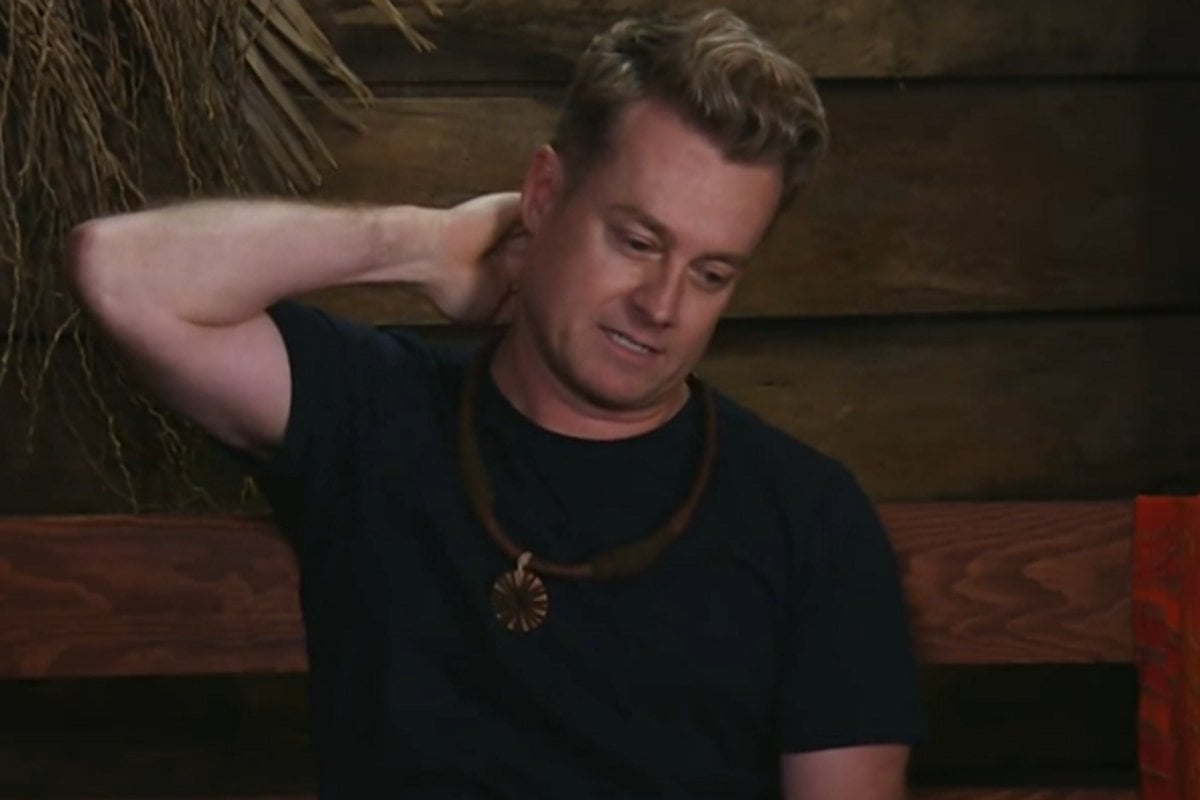 In 2017, Grant Denyer was involved in a near-fatal car accident.

Denyer and his co-driver, Dale Moscatt, were left injured after they crashed into a tree while competing in the Lake Mountain sprint in Victoria.

"Grant sustained bruising to his lower back while Dale [his co-driver] has a suspected broken leg. Grant is walking around and is in good spirits," a Channel 10 spokesperson said at the time.

Watch: Grant Denyer reflects on the rally car crash that landed him in hospital. Post continues below.

In the years since the accident occurred, the TV host has rarely spoken about the incident.

But on Monday night's episode of I'm A Celebrity... Get Me Out Of Here!, the 43-year-old reflected on the ordeal.

"I had a really bad rally crash about two years ago. There was a failure, and the car left the road and I hit a tree head on," Denyer told the other celebrities.

"The noise my co-driver made still haunts me. He just made this half squeal half gulp, like someone acknowledging that..." he continued.

"Death was imminent," another celebrity chimed in.

"I thought that was it," Denyer added.

Speaking to the camera afterwards, the TV host explained that he has since retired from rally driving.

"I put a lot of chips in the motorsport basket and I'm prepared to take those risks, but I don't want to hurt the people around me. My family and friends and my kids," he said.

"Having kids makes it hard. That's when I said no more rally driving."

As Grant Denyer's time in the jungle continues, we decided to take a look back at his life in the spotlight.

Grant Denyer was born in Gosford, NSW, to parents Glynis and Craig Denyer in 1977.

At 13 years old, the family relocated to Dandenong, Victoria.

From a young age, Denyer had an interest in motor racing, "tearing up the family farm" in go-karts and motorbikes and winning the state go-karting title.

After joining Prime TV in Wagga Wagga as a Cadet Journalist, Denyer initially launched his television career as a V8 Supercar pit reporter for Channel 10, before becoming the weather presenter on Sunrise from 2004 until 2006.

In the years since, Denyer has hosted countless shows including It Takes Two, Australia's Got Talent, Million Dollar Minute, Family Feud, Game of Games, and Dancing with the Stars.

Outside of his television career, the 34-year-old has hosted a number of radio shows, and competed professionally in motor racing.

In 2008, however, Denyer's television and motor racing career was halted when he injured his back driving in a monster truck rally.

A poor landing resulted in a vertebral compression fracture and although he escaped without any nerve damage, he was forced to spend six months in hospital.

After winning the Gold Logie for his role on Family Feud in 2018, Denyer reflected on the dark time in his life.

"I wasn’t quite sure whether I’d be able to walk again so I spent six months lying flat, heavily medicated trying to let it heal... I didn’t really cope with that emotionally or mentally," he told the Daily Telegraph.

"It was a time where I didn’t really give a s**t whether I lived or died. I felt like I had nothing to live for."

For many years afterwards, the TV presenter dealt with severe health problems, including a struggle with prescription drugs.

"There are all sorts of traps that come with medications and warnings and no one prepares you for that - it is a hard cycle to get out of. I was just a bit broken, sad, lost," he told the Daily Telegraph.

"I mentally wasn’t well, I was on pain medication for a long time, and I probably wasn’t aware of the effects of that."

Speaking on his podcast, It's All True?, Denyer added that during his recovery from the accident, using pain medication was "the worst part, by far".

"As soon as you close your eyes you go into your worst nightmares," Grant shared.

"The things that you are afraid of the most are the first things that happen the moment you fall asleep and you start dreaming.

"It is traumatic as every time you sleep and then when you wake up you can't tell what is real and what isn't."

Grant Denyer first met his wife, Chezzi, while working at Channel Seven in 2005.

Speaking about the time they first met, Grant told Now To Love that he initially clashed with Chezzi because they were so similar.

"She was quite pushy in terms of how she thought I should do things and then I was a smart alec know-it-all who thought I knew better. There was a tug-of-war situation that went on for quite a while until one day, I brushed her hand accidentally and then I just felt this tingle from the top of my head to my toes just come over me," he explained to the publication.

Grant said in that moment he realised he couldn’t "live without this woman".

In 2008, the couple finally confirmed their relationship after months of mounting media speculation. They later married on Hamilton Island in the Whitsundays in 2010, after relocating together to the regional city of Bathurst.

The couple welcomed their first daughter Sailor in 2011, and their second daughter Scout in 2015.

In June, Denyer opened up about his life with two daughters.

"My greatest concern is not being able to observe every single waking moment with those growing little monsters," he told TV WEEK.

"Time is going so fast, and they're evolving so quickly in front of my eyes. I don't want to miss a thing - and as a parent, my greatest paranoia is, 'Am I focusing on work too much?'"

"In the hours we're together, we muck around, jump on the trampoline, play with the dollhouse or run outside with the dog. We ride quad bikes together; we go on little adventures. I'm deeply protective of ensuring that we have a balance, because it's not a game you want to get wrong. It's about making that time count."

In August, the couple announced that they were expecting their third child together.

In a video shared to Instagram, eight-year-old Sailor and four-year-old Scout announced that their newest family member is due in March 2021.

"So, we have some news. Our mum is pregnant! And mum's really sick. And she's been resting for days," the couple's two daughters said.

"We're so excited to play with it and look after it."